Hello gentle readers, and welcome to the SwitchArcade Round-Up for January 26th, 2021. In today’s article we’ve got a full review of the freshly-released Atelier Ryza 2: Lost Legends & the Secret Fairy, courtesy of good ol’ Mikhail. There are also a couple of Mini-Views from yours truly, several new releases to look at, and the usual lists of incoming and outgoing sales to consider. Let’s get started! 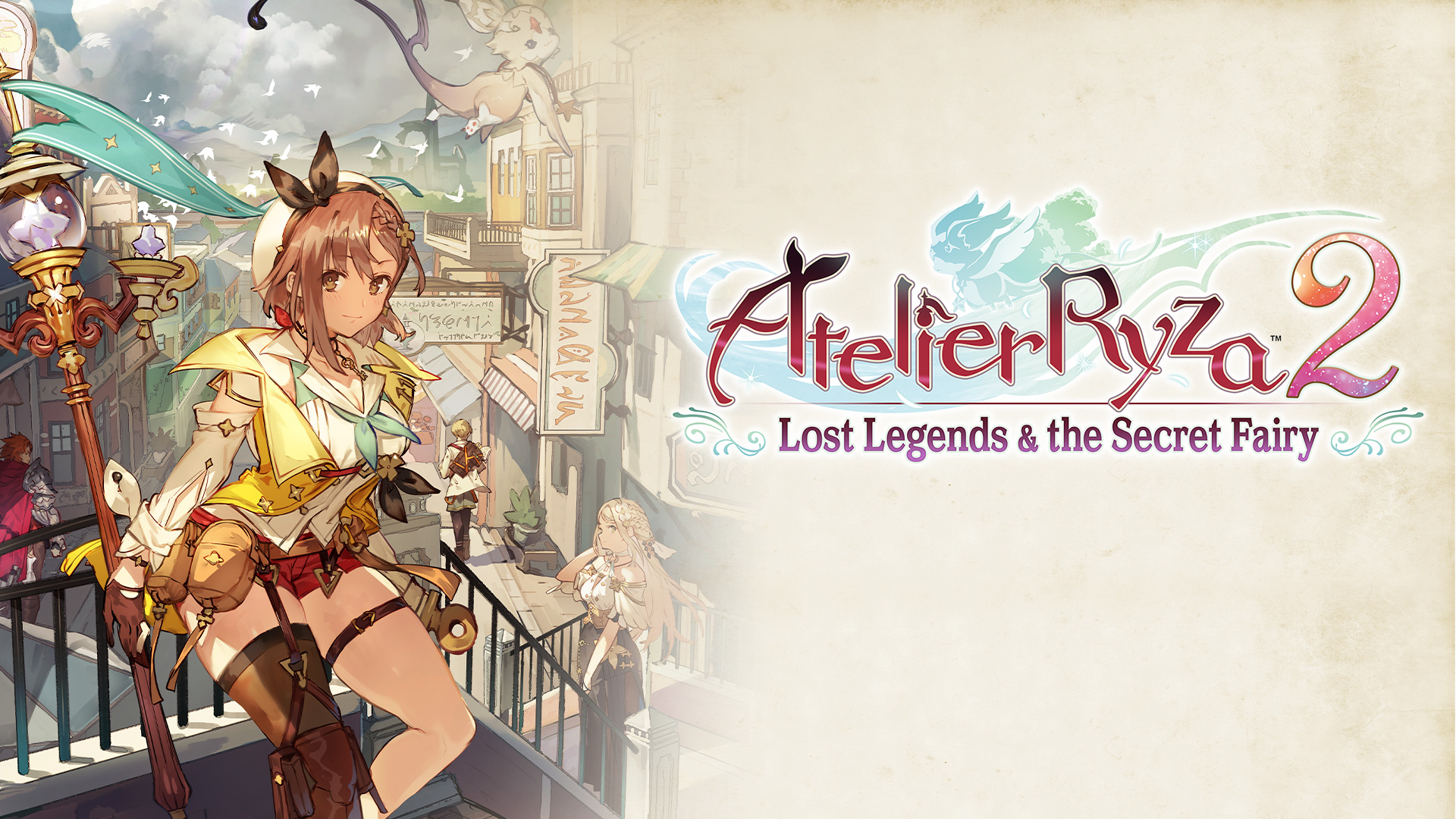 When Koei Tecmo and Gust started porting Atelier games to Nintendo Switch with Atelier Lydie & Suelle, I was both glad and a bit disappointed. I was glad because I had enjoyed almost every single Atelier game on PS Vita and was hoping we would continue to get handheld versions but disappointed because Atelier Lydie & Suelle was a bad conversion. Ever since that release, the Atelier ports have been improving and Atelier Ryza: Ever Darkness & the Secret Hideout was good enough for me to recommend over the PS4 version. Fast forward to today and Atelier Ryza 2: Lost Legends & the Secret Fairy has finally launched in the West as a sequel to the first game and is a fantastic release in just about every way.

Atelier Ryza 2: Lost Legends & the Secret Fairy is set a few years after Atelier Ryza: Ever Darkness & the Secret Hideout and features you taking on the role of Ryza once again. This is the first time a new Atelier game has retained the same protagonist as the previous entry. After the events of the first game, Ryza is invited to Ashra-am Baird, the royal capital for some help. This is where her new adventure begins, involving old friends, mysterious ruins, some great new characters, and a plethora of additions and enhancements to the core gameplay of the original. Atelier Ryza’s story wasn’t the best compared to prior games but it was serviceable. Atelier Ryza 2 has a lovely story and it makes me excited for Gust’s next Atelier game. 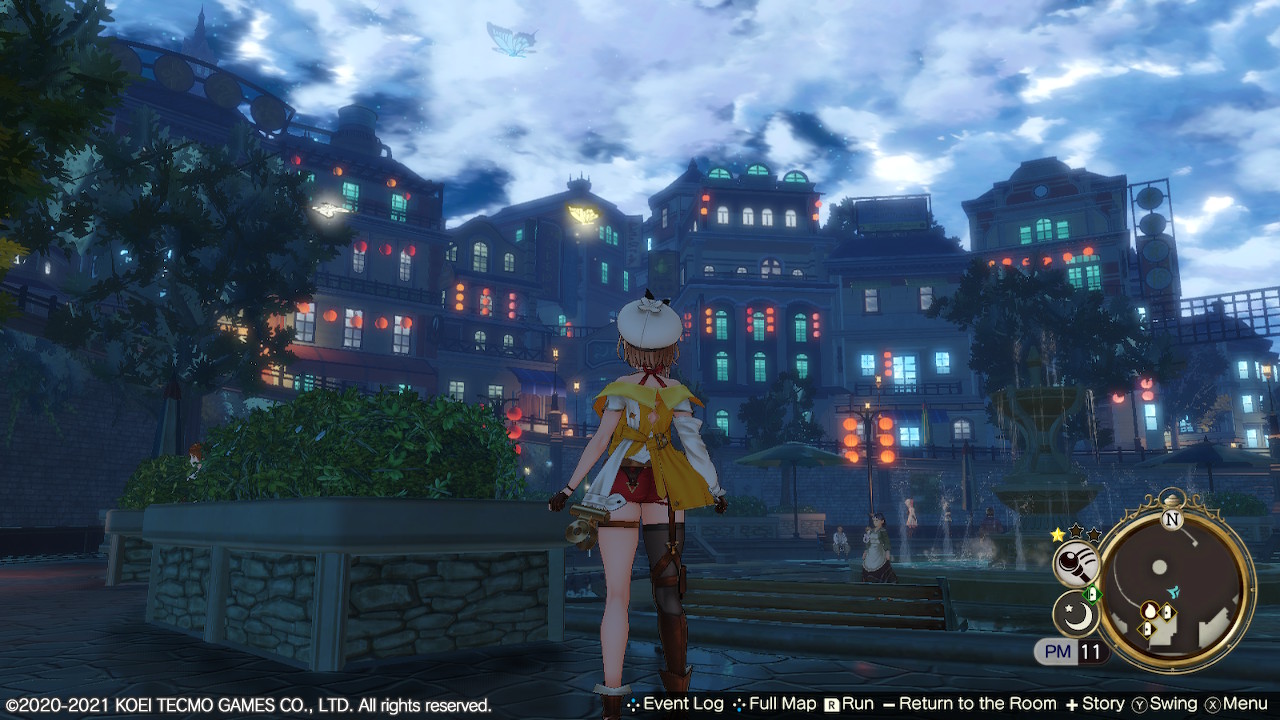 In terms of gameplay and flow, Atelier Ryza 2 is similar to Atelier Ryza but just about everything has been supercharged with new features, mechanics, and more. Exploring isn’t just fetch quests in flat areas. Ryza now has new exploration actions and abilities like swimming underwater, climbing up, crawling through gaps, a grappling hook, and more. All of these add to the experience and finally made gathering and exploring in an Atelier game feel refreshing.

Alchemy has had some nice changes as well building on the system in the first game. Those who aren’t interested in learning the ins and outs of the system can even opt for the auto synthesis options. The addition of new mechanics during exploration makes ruins and dungeons a lot more fun with mystery solving elements and being rewarded for looking beyond the regular path. 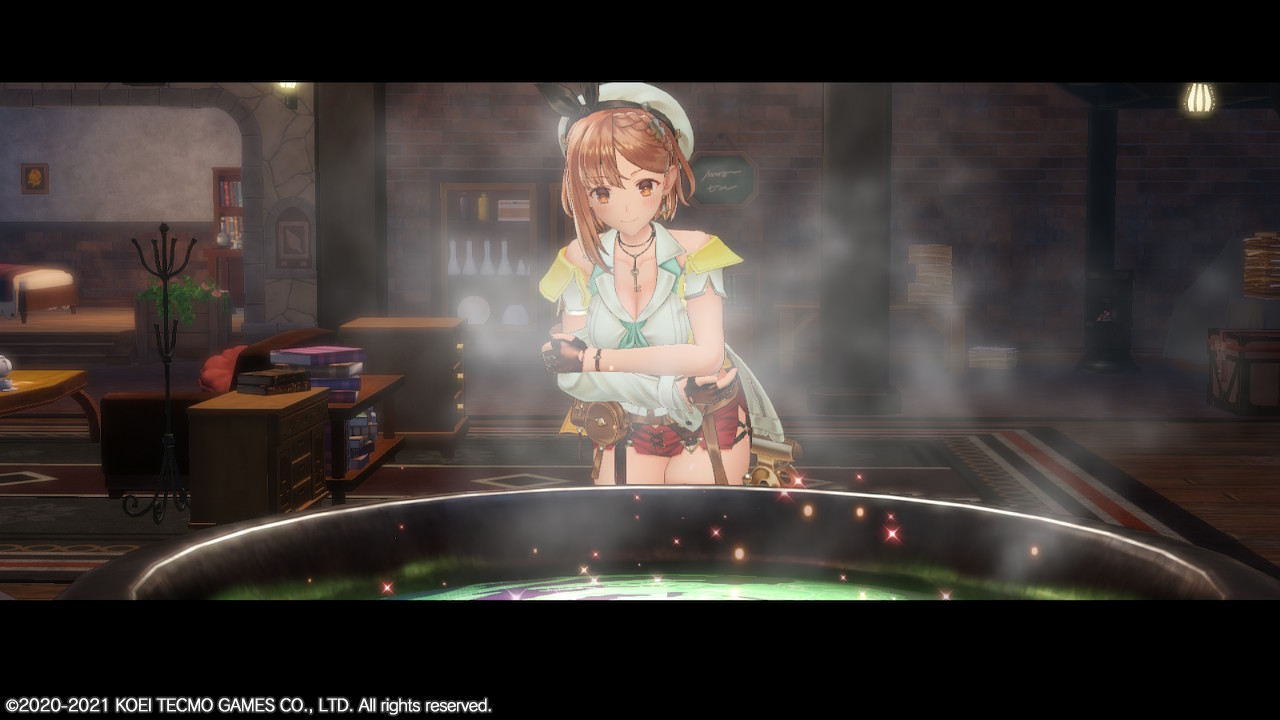 Combat in Atelier Ryza was drastically different from the traditional turn based fare in earlier games with its fast paced real time focus but Atelier Ryza 2 speeds things up further with quick switching, changes to items in combat, skill chains, and lovely cinematic camera cuts and angles. All my initial fears of this combat being the same were put to rest after the first tutorial battle. The system Gust has here is excellent and it is one I didn’t tire of in my time playing Atelier Ryza 2 over the last few weeks on multiple systems.

Visually, Atelier Ryza was a big step above past entries but Atelier Ryza 2 is on a whole other level. The lovely character designs are even better but the environments, visual effects, and boost to production values are felt immediately when you reach the royal capital. I never thought I’d be using the adjective ‘breathtaking’ for an Atelier game but here we are. Atelier Ryza 2 looks stunning at different times of the day in-game and across every little animation during combat and exploration. The only real visual flaw is in how NPCs and some dungeons look dated. 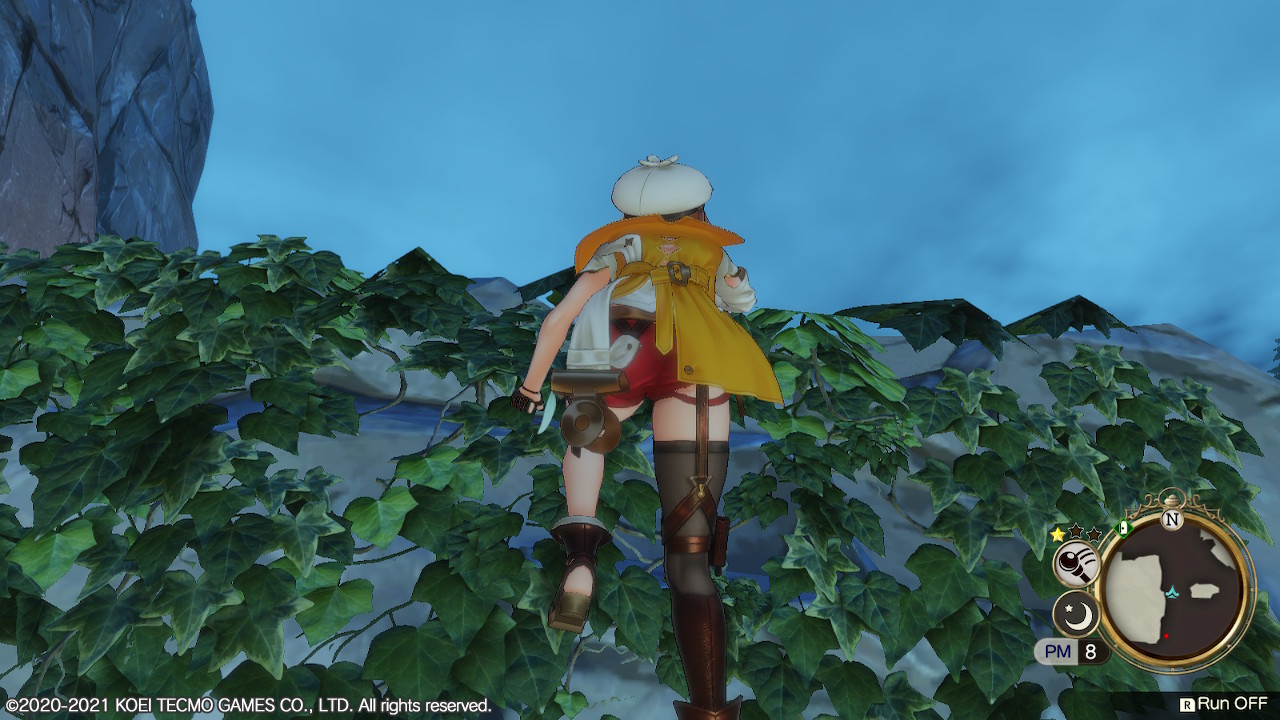 When it comes to the audio, Atelier Ryza 2 only features Japanese voice acting. Hopefully the new found success for the series makes Koei Tecmo consider bringing back English dubs. The Japanese dub is very good though and there were only a few instances of there not being subtitles for any spoken dialogue unlike past games where you’d miss out on more.

Atelier Ryza 2 is easily the best looking Atelier game yet and it shines on Nintendo Switch. Just like Atelier Ryza, it feels right at home on the platform with great visuals both docked and handheld. There is some visible dithering but the overall image looks great and I love the use of depth of field in cutscenes and while exploring. Performance is mostly great with only a few instances of noticeable slowdown. 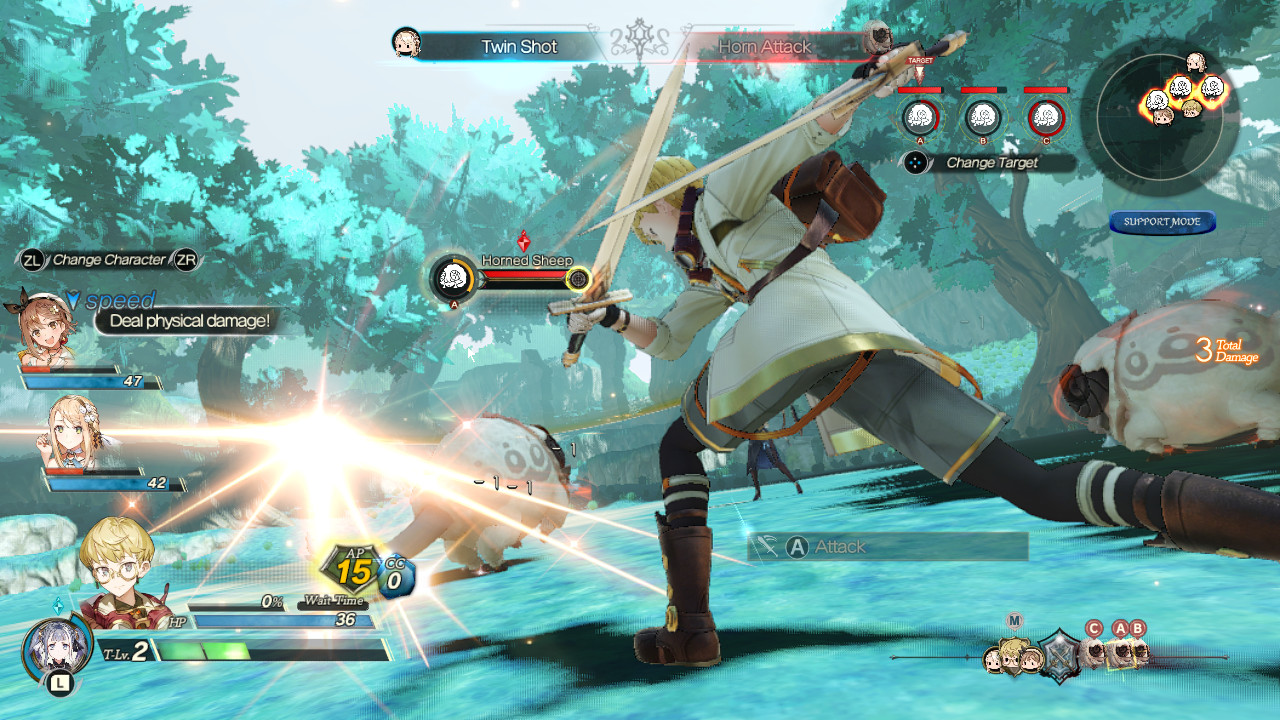 While the boost in visuals and production values for graphics is very noticeable, I’m blown away by the music. Atelier Ryza 2 might have my favorite Atelier soundtrack in years. It feels like an Atelier soundtrack with upbeat melodies, a generous use of piano, and even some tunes that would fit right at home in Gust’s hidden gem Blue Reflection. The standout tracks are battle themes, main city music, and a few of the late game songs.

Overall, Atelier Ryza 2: Lost Legends & the Secret Fairy is one of the best Atelier games ever and a superb experience on Nintendo Switch. It looks and runs brilliantly and builds on the original game in every way. While I initially expected a full sequel featuring the same protagonist to feel more of the same, Atelier Ryza 2: Lost Legends & the Secret Fairy’s gameplay changes make it feel fresh even to veteran players like myself who have played the original twice and every localized Atelier release in recent years. If you’ve ever wanted to get into this hidden gem of a franchise, this is the game to play. –Mikhail Madnani 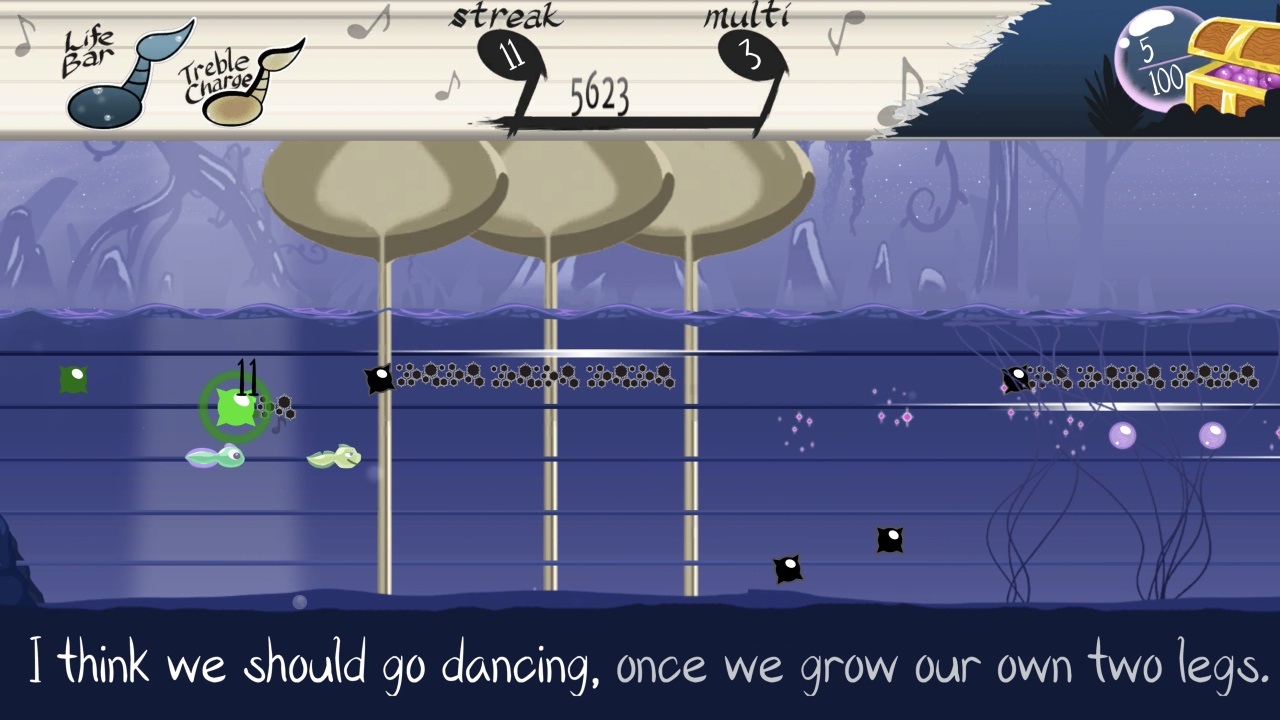 Great music, great art, and to its credit it doesn’t play quite like any other rhythm game I’ve played. If you can get into making your own music, the edit mode can provide hours upon hours of enjoyment on top of the main game. At the same time, its unusual gameplay can be a little tough to wrap your head around and the story mode itself is rather short. There’s also one particular level that is dangerously flashy, so if you’re photo-sensitive I’d recommend passing on this unless it gets patched to address that. If you think you’ll use the edit mode, feel free to slap an extra half-point on that score down there. Otherwise, it’s a solid rhythm game for the price that nevertheless ends a little too quickly. 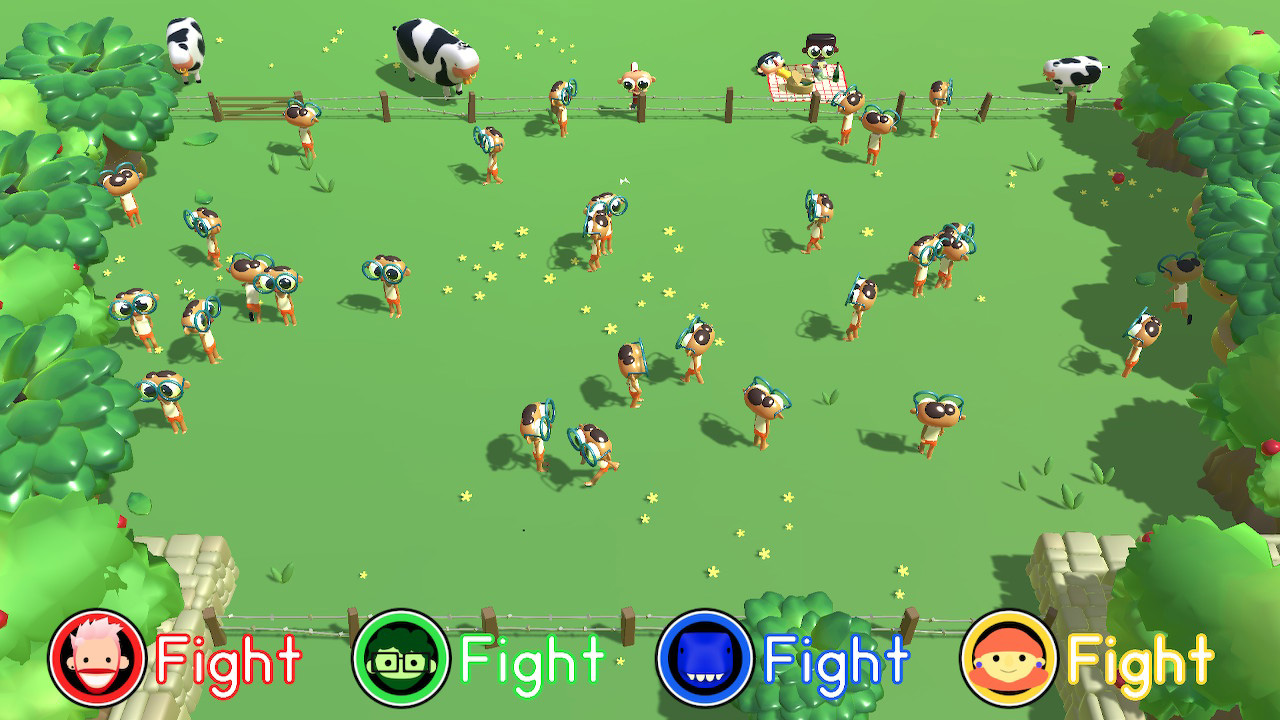 With no single-player content or online multiplayer, this game lives or dies on how strong it is as a party game. A good party game needs two things, in my opinion. First is a good concept that can be picked up easily by players of all skill levels. Unspottable has that. You’ll never have to worry about more than a few different actions, and the core idea of punching other human players after identifying them is something anyone can deal with. Some of the stage gimmicks can be a little tricky for casual players, but for the most part anyone can have fun with the mayhem even if they aren’t winning. The other thing a party game needs is enough fuel to keep the fire burning for an hour or two at a time, and that’s where Unspottable stumbles. Each stage is distinct enough on its own, but it won’t take more than one or two games before the stages repeat enough for things to get a bit tired. It’s a shame because with a bit more meat on the bones this could earn a regular spot in gatherings instead of the probable one-off that it is. 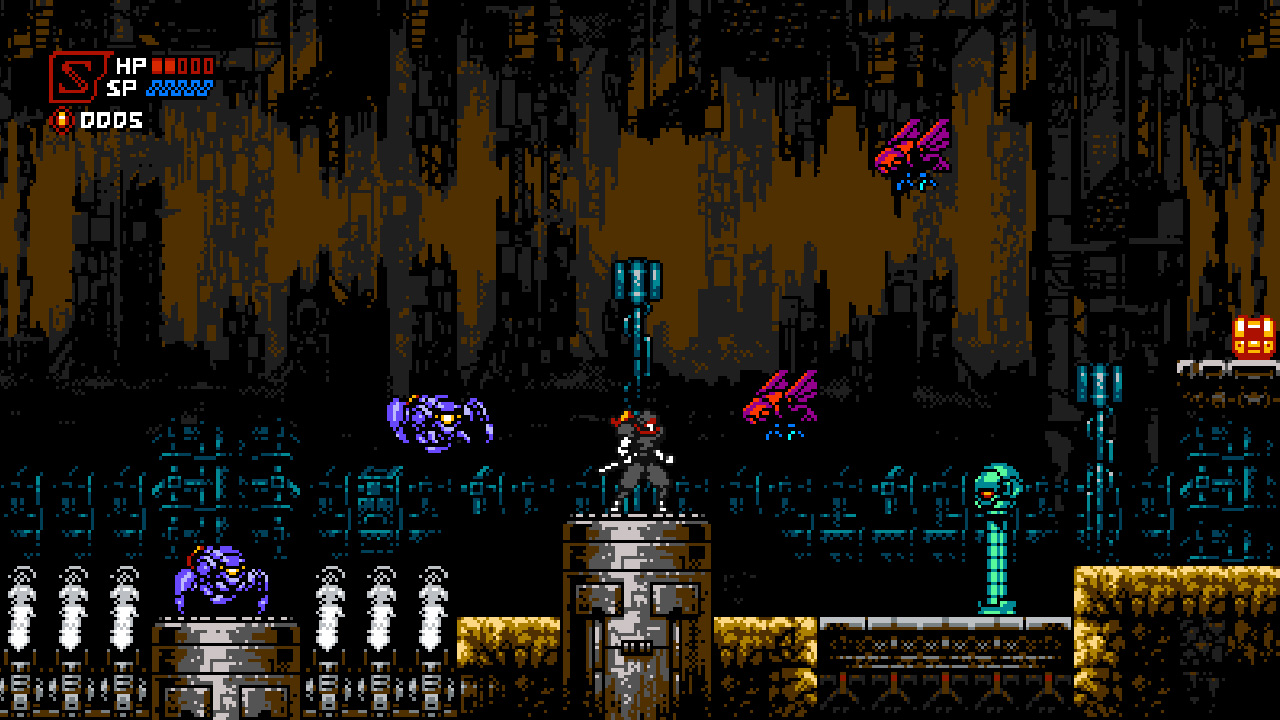 Hey friend, do you like side-scrolling action games? Do you like 8-bit aesthetics? Do you like… ninjas? If the answer to all three of those questions is in the affirmative, you will certainly want to check out Cyber Shadow. Developer Mechanical Head Studios put years of work into this game, and the nice folks at Yacht Club (who know what 8-bit style aesthetics should taste like) helped the team make the game the best it could be. This kind of thing doesn’t always work out as well as hoped, but it sure did here. Fans of Ninja Gaiden or Shadow of the Ninja should report to this title immediately, but in general I think most action game fans will take to what it’s offering. 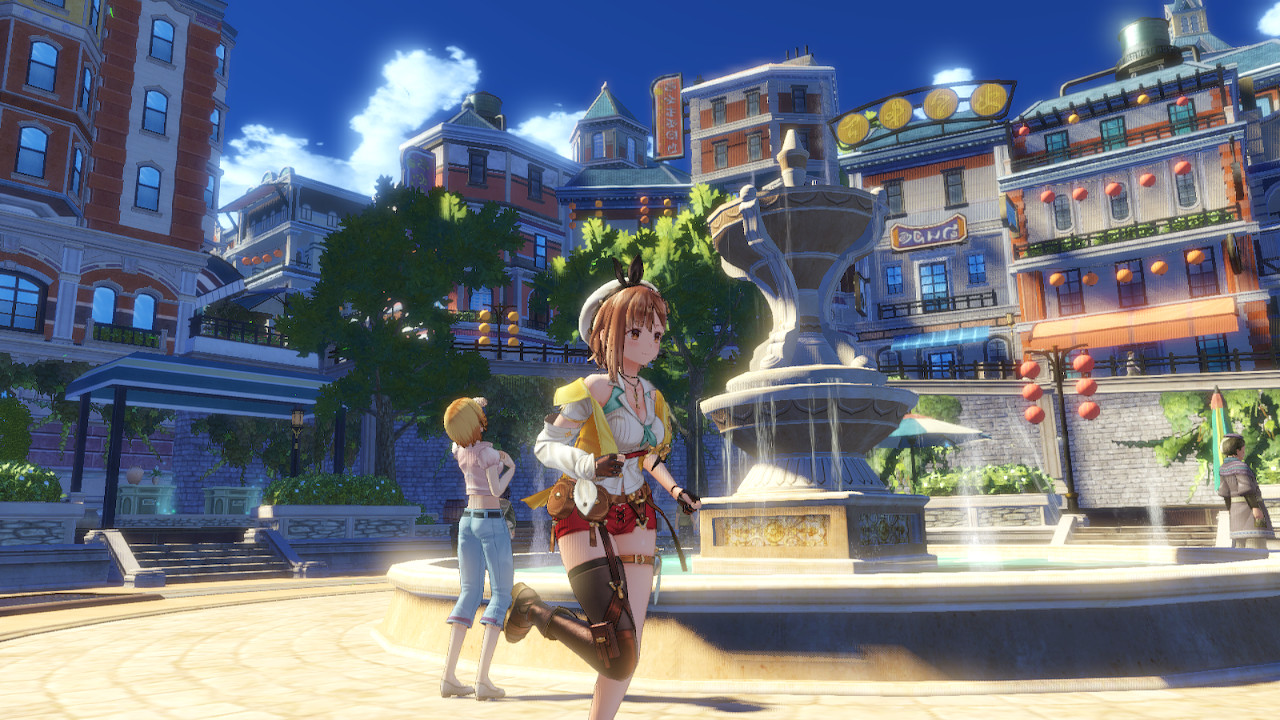 Mikhail’s review up above already said a lot about this game. I don’t have too much to add except my support of his feelings on this charming sequel. Atelier Ryza was already a very solid JRPG with plenty to sink your teeth into, and this follow-up builds on it nicely. If you’re looking for something to keep you busy until Bravely Default II hits, you won’t go wrong by getting into this one. 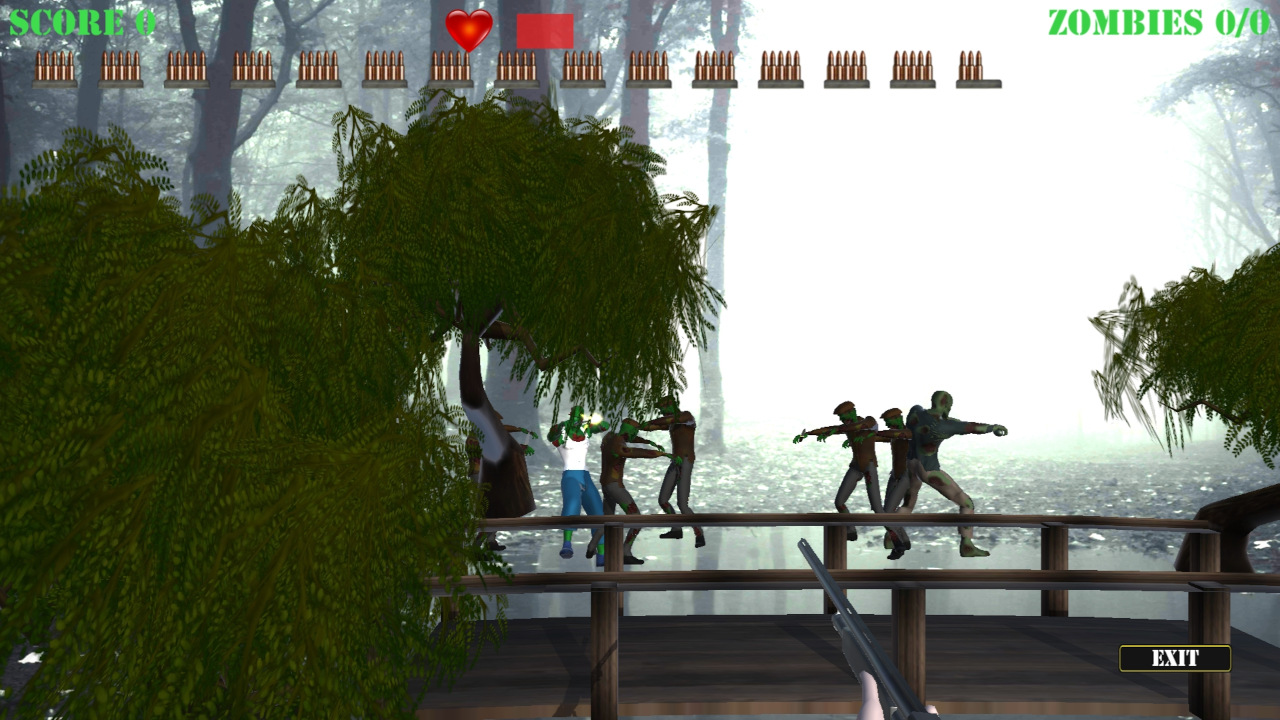 After taking a hard-earned day off yesterday, Pix Arts is back again with another game of dubious quality. This one sees you shooting zombies in a rail shooter of sorts. There are ten different weapons to use and at least three different environments. Only four dollars and it still doesn’t look like it should cost that much. That’s all I’ve got to say about it. 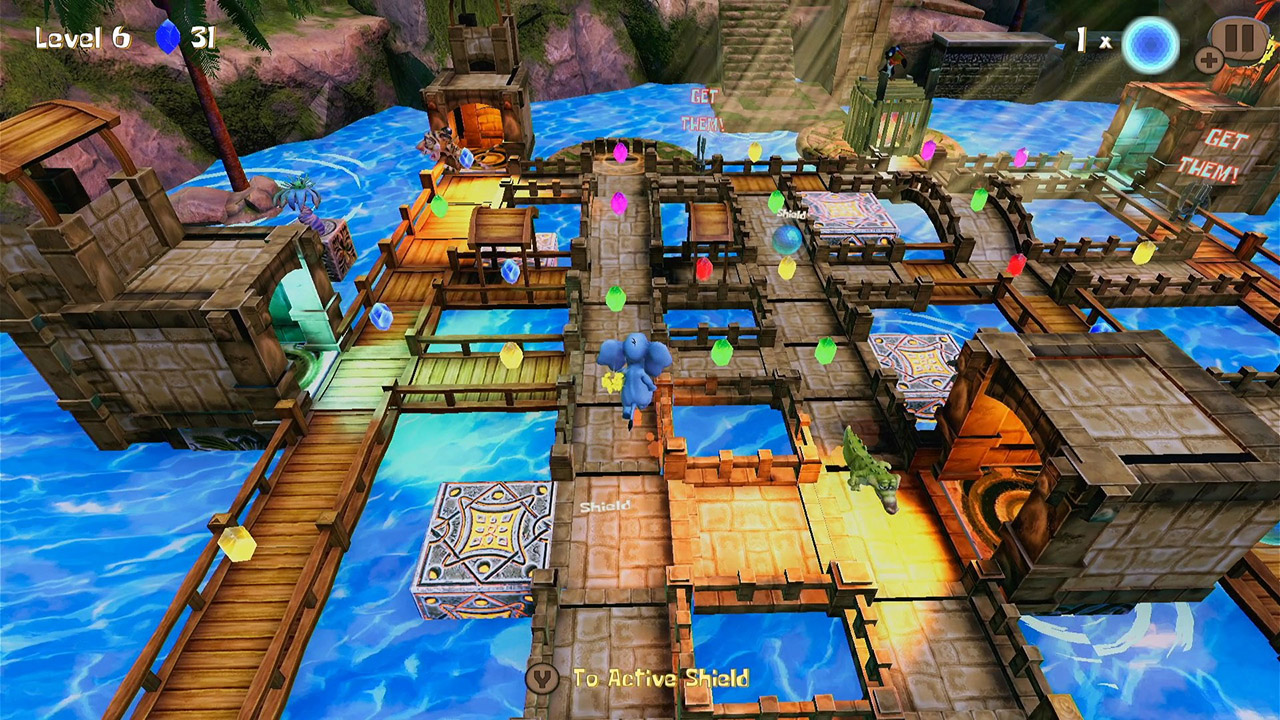 Not to be outdone by Pix Arts, Ultimate Games is here with its own questionable offering. I mean, I say that, but compared to Zombie Apocalypse this is practically Pac-Man. That’s not to say this is particularly good, but it is a game you can play. You control a little elephant who needs to collect all the pelle… er, gems on each map while avoiding the many enemies and hazards laying about. There are some gimmicks like switches and power-ups to keep things fresh as you make your way through all 24 stages. 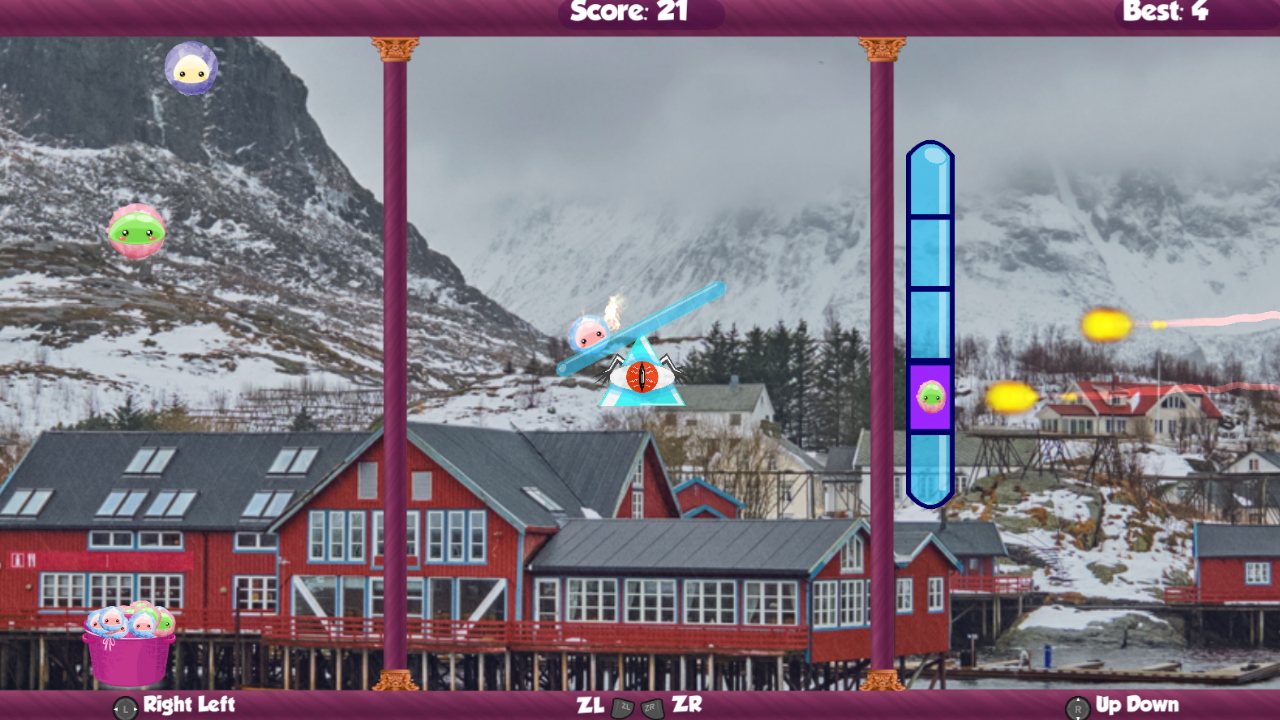 This multitasking puzzle game came out a couple of years ago on PlayStation 4, and it doesn’t seem to have made a tremendous impact. Using the directional pad and the shoulder triggers, you need to play three different games at the same time. In one part of the screen, you’re catching falling pieces in a basket. In another, you’re balancing two objects. In the third, you’re moving a bar up and down to catch objects coming in from the side. None of these tasks are very complicated, but staying on top of all of them at the same time can be quite the job. It does what it sets out to do, and it’s very cheap. I leave it up to you to decide if that is enough.

Hmm, that’s a decent-sized list of new sales. I’d say the most interesting discounts in there are Football Manager 2021 Touch, Jenny LeClue: Detectivu, and perhaps Overlanders. That last one is only due to the deep discount, as it’s kind of an average game. The outbox doesn’t have anything too important in it unless you like middling licensed fare or have an interest in the ultra-weird Gunma’s Ambition and Toridama. Check through both lists anyway, friends. 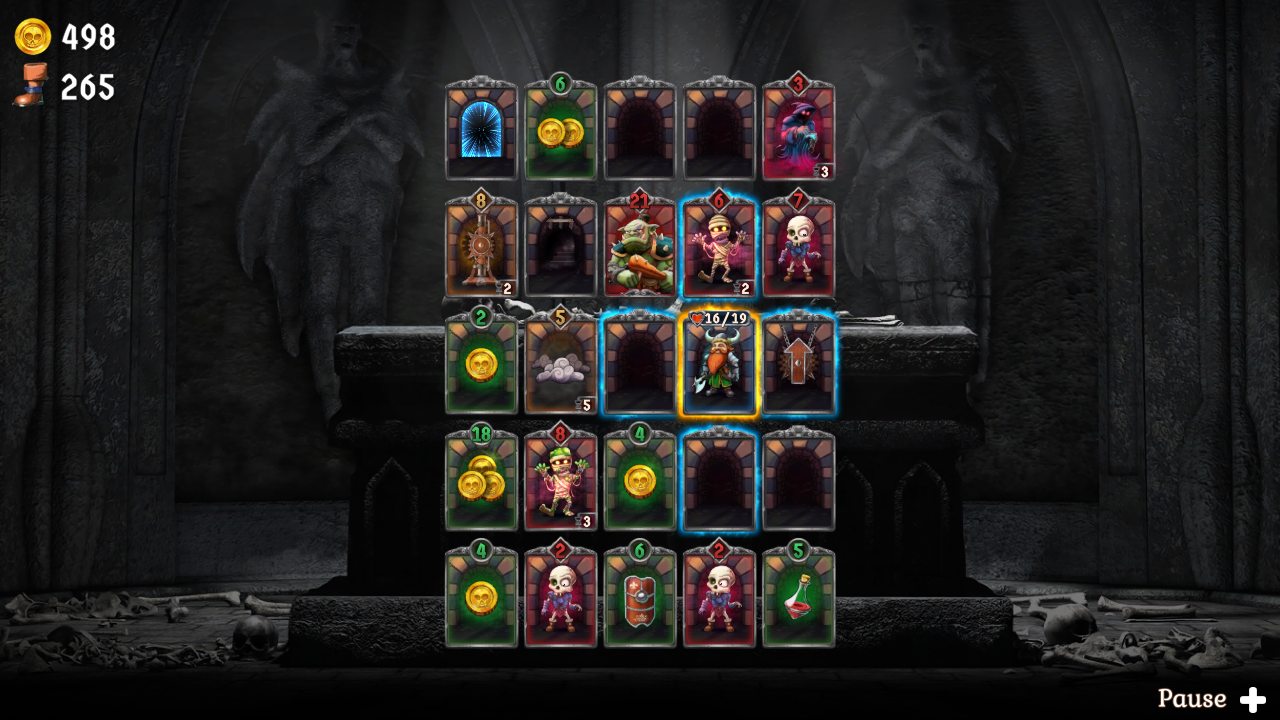 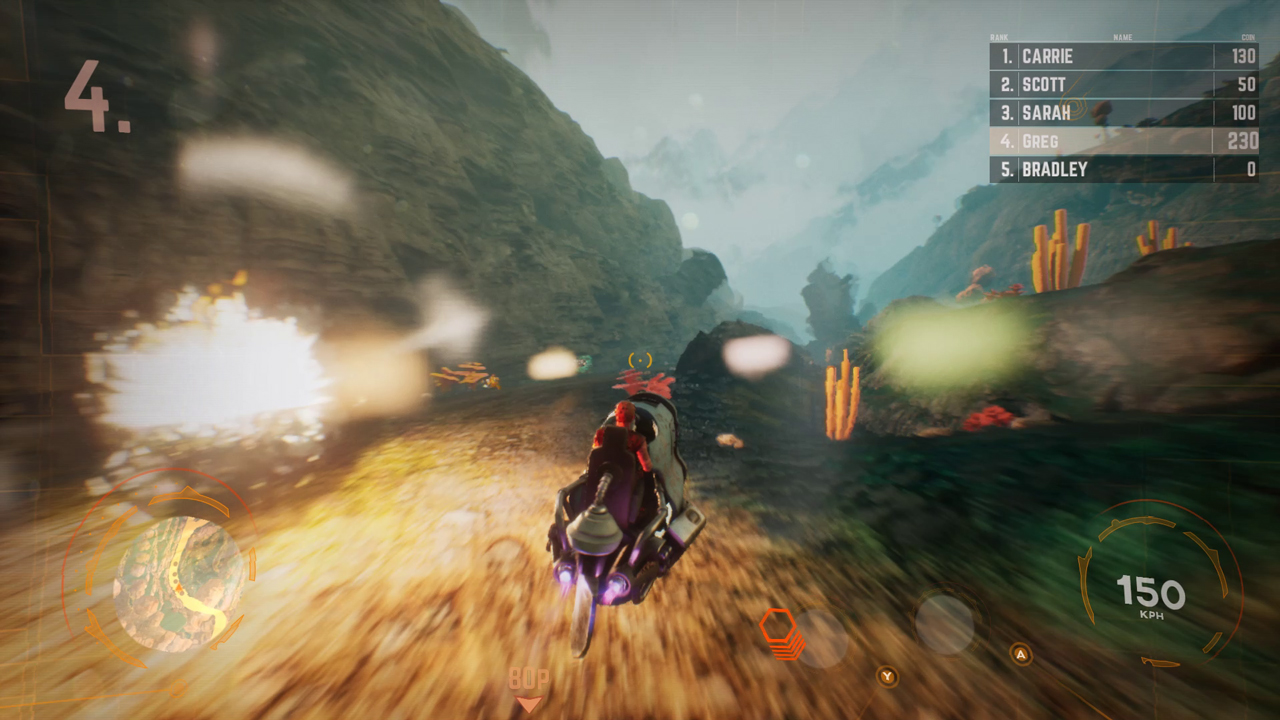 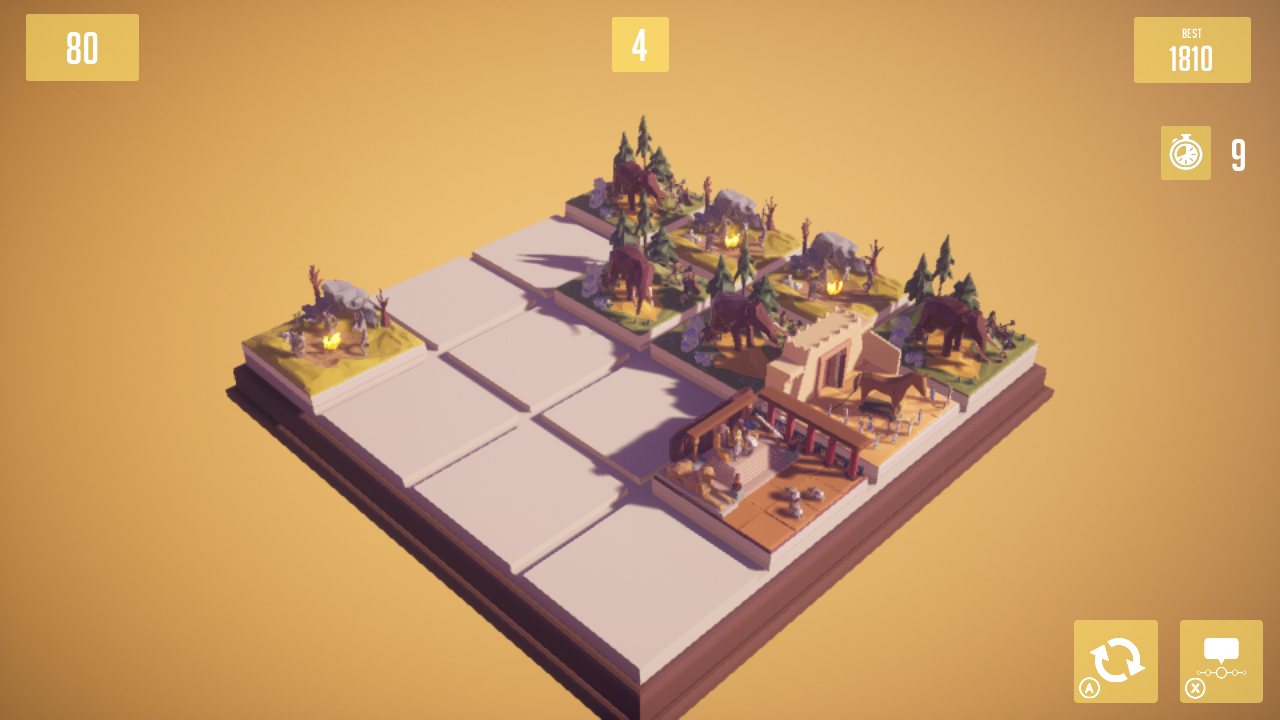 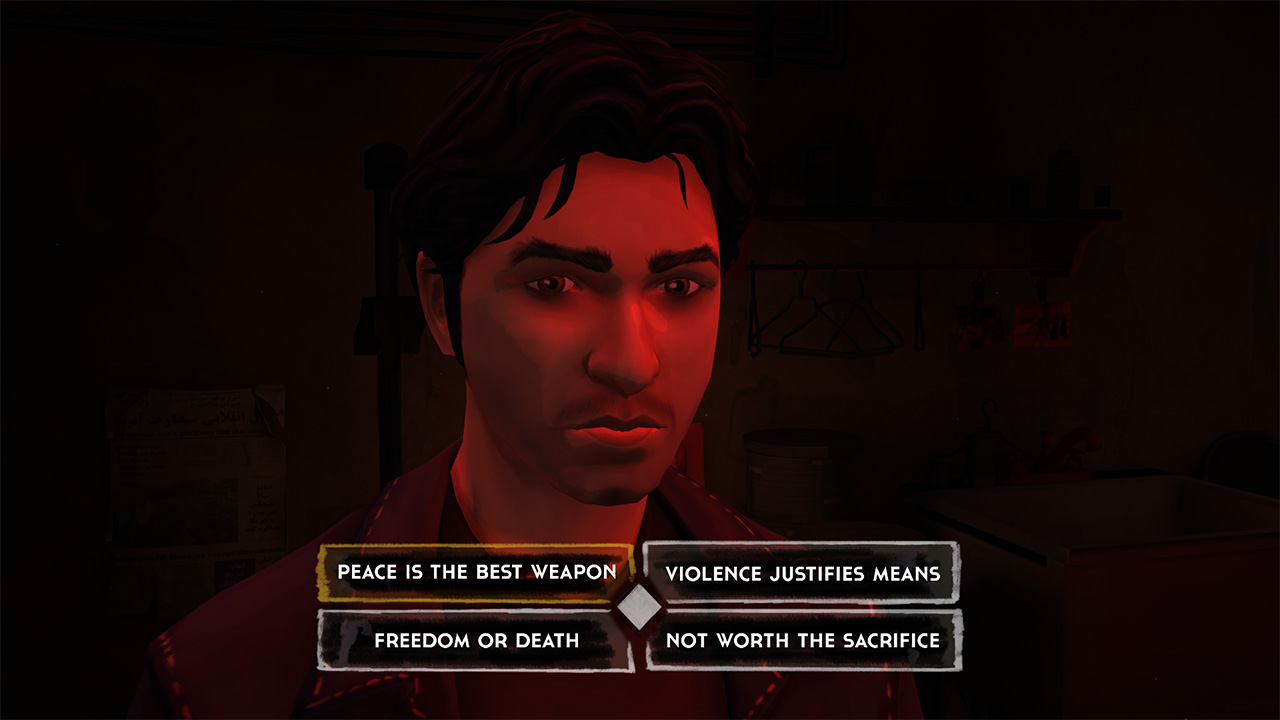 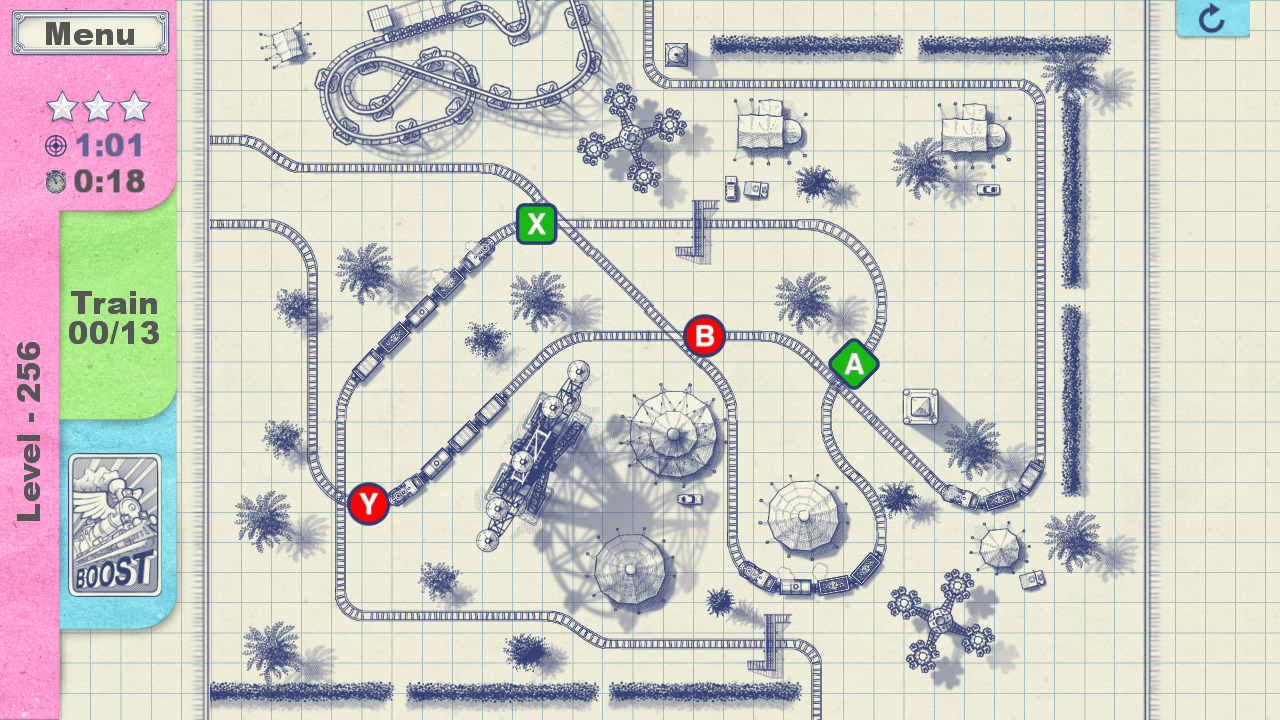 That’s all for today, friends. Tomorrow will see a few more new releases before the big end-of-week push, so we’ll take a look at what’s on offer. There will be some news of course, and whatever sales come along in the next day will also be included. I hope you all have a terrific Tuesday, and as always, thanks for reading!