Light and dark, sun and shadow… the classic metaphors for life and death. Except, in Felix the Reaper ($3.99), they are not just metaphors, they are also the basic premise of the game. Players will guide Felix, a new field Reaper in the Ministry of Death, as he orchestrates ever more elaborate deaths, intent on impressing his lady-love in the Ministry of Life, Betty. The catch? The two may never meet—Felix must remain in the shadows, while Betty dances in sunlit meadows.

Felix the Reaper is a 3D puzzler in the style of Sokoban. Promising shadowy puzzles, comedy blacker than a city sky at midnight, and a dancing reaper, there are a lot of places it could fall short. Unfortunately, fall short it does… where art, music, and animation are high points, the gameplay itself leaves much to be desired. 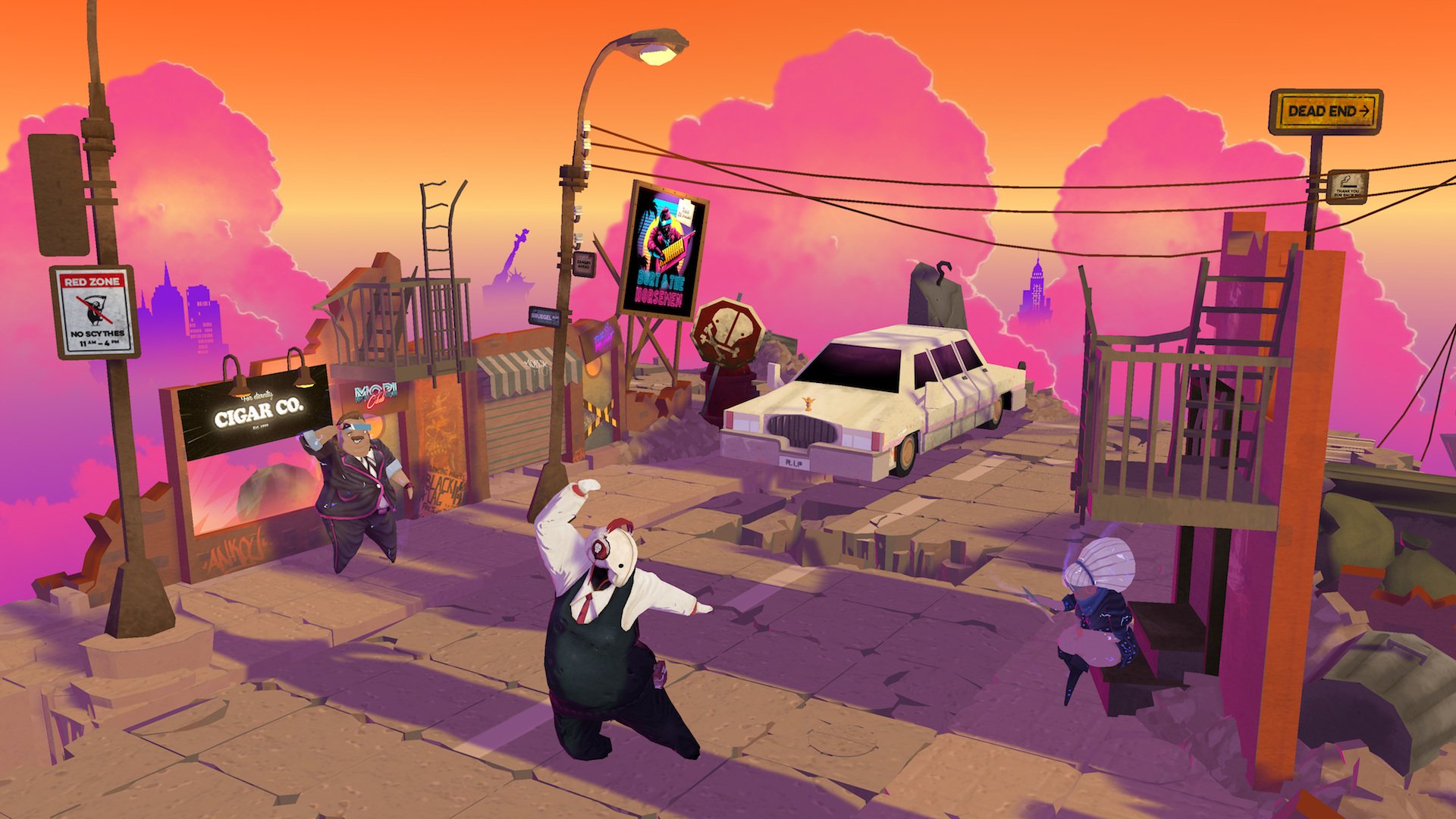 Each chapter starts a little before a character’s timely death, and each level therein we guide Felix through shadows, moving barrels here, mirrors there, setting the stage just so for the star of the show to fall. Of course, it wouldn’t be a game, let alone a puzzle game, if all the shadows just aligned perfectly from the get-go. It’s a little more work than that, and frequently requires moving boxes, barrels, bundles of wheat, mirrors, and other miscellaneous items and beings to create a shadowy path to your destination. In addition to rearranging the environment, players also have a measure of control over the sun’s position, almost in a sort of time travel—although that can’t be entirely accurate, because time is explicitly frozen while Felix is around. Whatever the cause, the idea is interesting, and rather fun to play with.

Although playing with shadows is an immediately interesting mechanic, all the steps and juggling positions and going back and forth and back… and forth again can get rather tedious, especially if you’re never entirely sure what to do (although this is somewhat alleviated by the “next step" button in the menu). It’s not a big deal in the early chapters, but by chapter four… you’re really starting to feel the tedium sometimes, and that’s without going back to get three skulls, or playing the hardcore level variants.

Well, it’s a little much for me anyway, but for folks who find the basic puzzles a just right, or even a little easy, and who want a bit of a challenge? Well, you’re who the hardcore levels are for. These levels are slightly altered, have the additional objective of collecting coins, and new limitations—namely, players cannot rewind to the last milestone, or restart the level… and if you want to go back and do them later, you’ll have to replay the base level. And if that wasn’t enough of an extra challenge, there are also “super-achiever", time trials accessible from the level menu for those who meet certain skull requirements. Altogether, there are more than enough levels, at a variety of difficulty levels (although none especially easy), for a great many people.

Felix the Reaper is a fun game, but that’s not really due to the gameplay. No, the gameplay itself is often just there, while the enjoyment is primarily due to our dancing protagonist and his tunes. Watching Felix slide from one point to another, dance in place, or bounce his way into the televator is fun, and one wonders what he is listening to. Fortunately, we know. Probably. It isn’t exactly a stretch to assume that the soundtrack we’re listening to is the very same music our lovable reaper is dancing to. If so, it’s not half bad. As background music, each of the thirteen tracks ever so subtly alters the mood from whimsical, to pensive, to melancholy, to upbeat and happy, and more besides, while always keeping to a certain lightheartedness. It’s almost a perfect fit. Almost.

Why “almost", you ask? Well, it’s a small, petty thing… but some of—well, actually, a great many of—the dancing animations don’t quite line up with the music. This is almost certainly because they are idle animations, and so difficult to line up perfectly, but… I’ve spent a bit of time watching them (it’s hard not to, when you’re trying to figure out where to put a particular puzzle piece goes), and it becomes glaringly obvious pretty quickly that they aren’t synced up to the music. A small thing, to be sure, but when your main character is supposed to be dancing to the music you’re listening to, it’s annoying to see them not actually in sync. 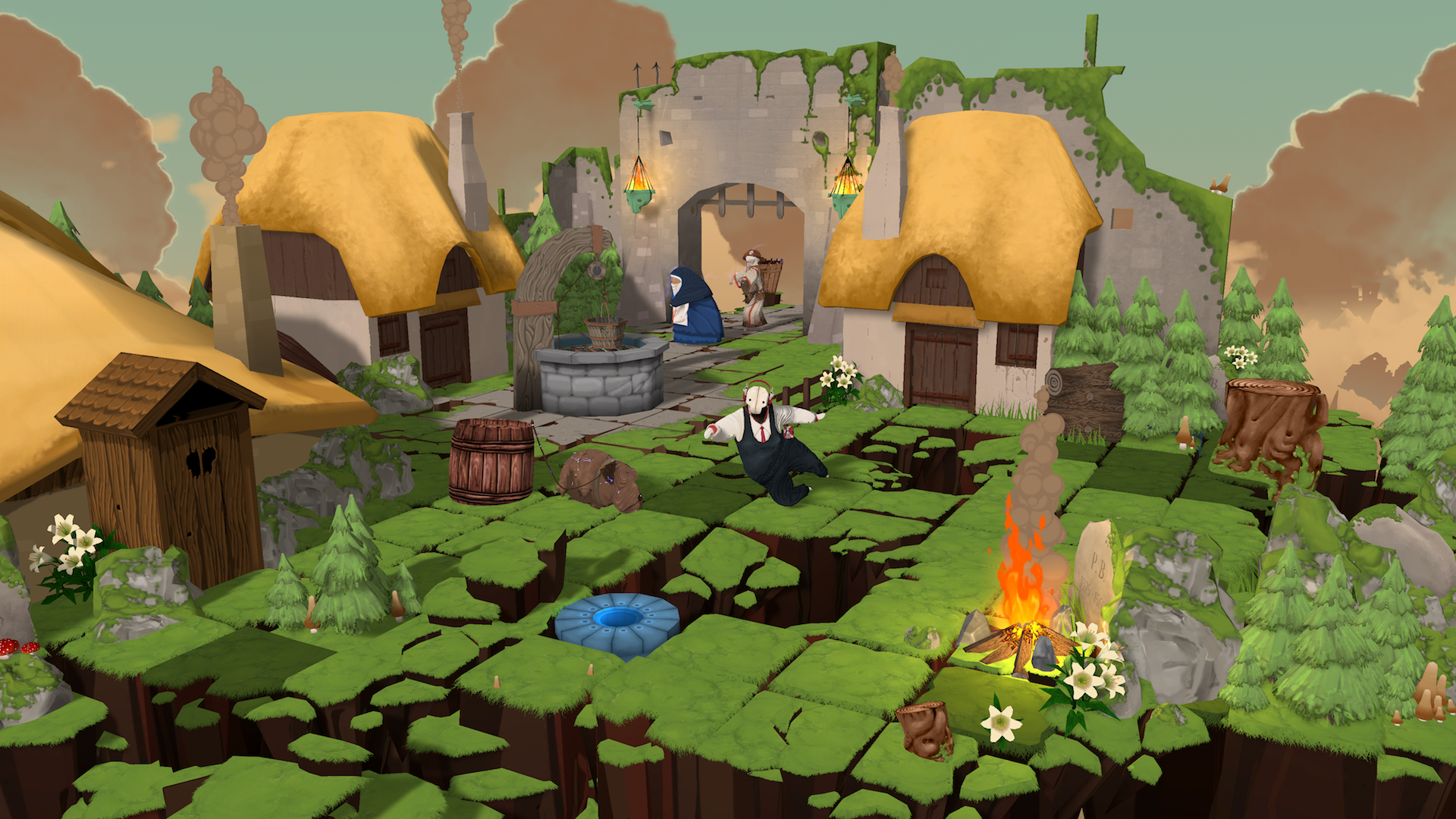 Moving back to gameplay, remember how I said it was fun to play with the shadows? I stand by that. It is not fun, however, to constantly try to correct the camera angle. Nor is it fun to tap a square and not go there, or to try and drag an object to a square and either not have it register, or try to place the object on another nearby square. Each of these is annoying individually, but altogether, they’re really quite a pain. Add in the action and move limits, and the clock, and some of the later levels really start to not be very fun.

That’s not all, though. Part of Felix the Reaper’s appeal is the ridiculously over the top ways each character dies. Deaths like accidentally spearing your brother because you mistook him for a deer; or a dog chasing an extra crispy tenderloin down a well, dragging the blind madman down with him. Haha, Oops. Maybe it’s the gory, close up shots of each death, or maybe it’s that each character is more sad than comedic… but I really don’t see the humour. Which is a shame, because I came in expecting to really enjoy these, and… I’m not.

Right from the start Felix the Reaper makes three promises: There will be dark comedy, there will be shadow puzzles, and there will be dancing skeletons. It delivers on all three. The humour is black, the puzzles are interesting, and Felix’s dance moves are excellent, if somewhat mistimed. This is clearly a labour of love, and that love shows through clearly. Unfortunately, it was not evenly distributed, and the rough patches make themselves known rather quickly. Nevertheless, I would encourage you, oh reader mine, to give it a shot. Watch some gameplay, read a few reviews—it could be just the game for you!