Most people would probably be familiar with developer Cotton Game by way of their surreal adventure game series Isoland, which has received several entries on mobile over the past handful of years. But what you may or may not be aware of is that the developer has achieved a similar cult-like success with another point-and-click adventure game they released nearly half a decade ago called Mr. Pumpkin Adventure. Like the Isoland games, Mr. Pumpkin featured their signature brand of art as well as an abundance of irreverence, humor, and challenging puzzles to solve. Well, after quite a few years and plenty of fan demand, a sequel to Mr. Pumpkin was created and it’s just about to hit the iOS and Android platforms.

The sequel is called Mr. Pumpkin 2: Walls of Kowloon, and like Isoland 2 the mobile version is being published by the good folks at Lilith Games, who themselves are renowned for developing their own hit game Abi: A Robot’s Tale. As the subtitle says, this is a game that takes place in Kowloon Walled City, which was an actual city in Hong Kong. It has one of the most tumultuous histories I’ve ever heard, and it’s really worth digging into and learning more about Kowloon Walled City as I personally find everything about it fascinating. 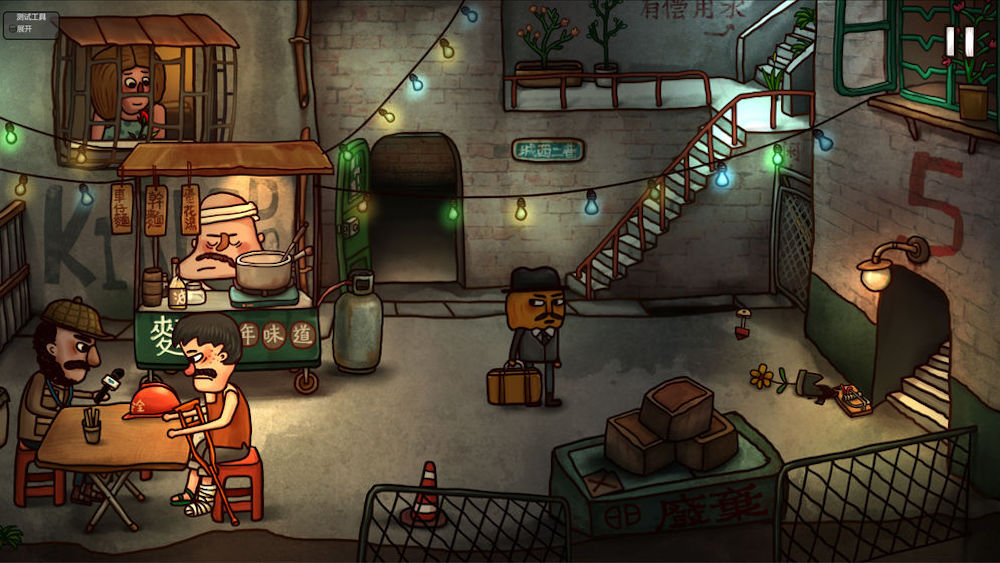 The super duper short version of that history is that following World War II, no government entity really wanted to be responsible for Kowloon Walled City so they sort of left the residents there to their own devices. During the 1960s and ’70s there was an explosion of population there, and since the city is only roughly 6.5 acres of space, the only way to go was up for building more places for people to live. Due to the lack of regulations there, this meant things were built by any means possible without any sort of code requirements or urban planning. This lead to a mishmash of rooms and corridors and alleys that created a totally unique urban dwelling with people both literally and figuratively living on top of one another.

Sadly Kowloon Walled City was torn down in the early ’90s, and while hard statistics are fuzzy, it is said that around 50,000 people lived in that 6.5 acre plot of land at the time. With that many people living in such a small space, coupled with the lack of regulations that allowed the city to be built up as it was, it’s no surprise that Kowloon Walled City has been an inspiration in games and media for decades now, as there really wasn’t anything else like it. If you’ve ever watched a movie, read a book, or played a game that took place in a dystopian cyberpunk city, chances are good that the city in that story was at least partially inspired by Kowloon Walled City.

The lack of oversight in Kowloon Walled City also led it to becoming a hotbed of drugs and crime, and many works tend to focus on that aspect or other urban legends about the infamous city when talking about it. However, despite any of the crime or destitution, there was also an extremely close-knit community that lived there. I mean you pretty much have to be when you’re living that close to each other! Kowloon Walled City’s unique circumstances allowed it to develop its very own culture unlike any other city in the world, and Mr. Pumpkin 2 chooses to look at what day to day life living in Kowloon Walled City was like with a more emotional focus on the residents who lived there. Cotton Game also pays homage to their favorite Hong Kong films from the ’90s with a number of easter eggs peppered throughout the game, like posters for some of the more popular films plastered on the city’s walls.

We’re big fans of what Cotton Game has done previously, so we’re pretty confident that Mr. Pumpkin 2: Walls of Kowloon will continue their unique style of storytelling with a cast of totally unique characters, interesting puzzles to solve, and their wonderful art style. The game should be rolling out to App Stores around the globe as you read this, and you can find it on the iOS App Store here and on the Google Play Store here if you’re on Android.

This article is sponsored content written by TouchArcade and published on behalf of Lilith Games to promote the mobile launch of their new point-and-click adventure game Mr. Pumpkin 2: Walls of Kowloon . For questions or comments, please email [email protected]