Mindless shooting in space is always fun. There’s something relaxing about killing alien ships in the middle of nowhere. It takes the fear of being stranded millions of miles away from home off your mind.

Enter No Way Home, a fun shoot’em up game brought by SMG Studio, the team behind games like Death Squared and One More Line.

In No Way Home, you play as Cho, the former Dutchess Start Captain. After the ship freezes for millions of years and is going to be wrecked by a bunch of meteors, her assistant Matey saves your life by ejecting both of them into space. What happened to the other dozens of lives in the ship, you’re wondering? Dead, they’re probably dead.

After you regain consciousness, you start looking for a way back to earth. You start exploring, one thing led to another, and now you’re part of space organized crime. It’s like Grand Theft Auto for kids and in space. 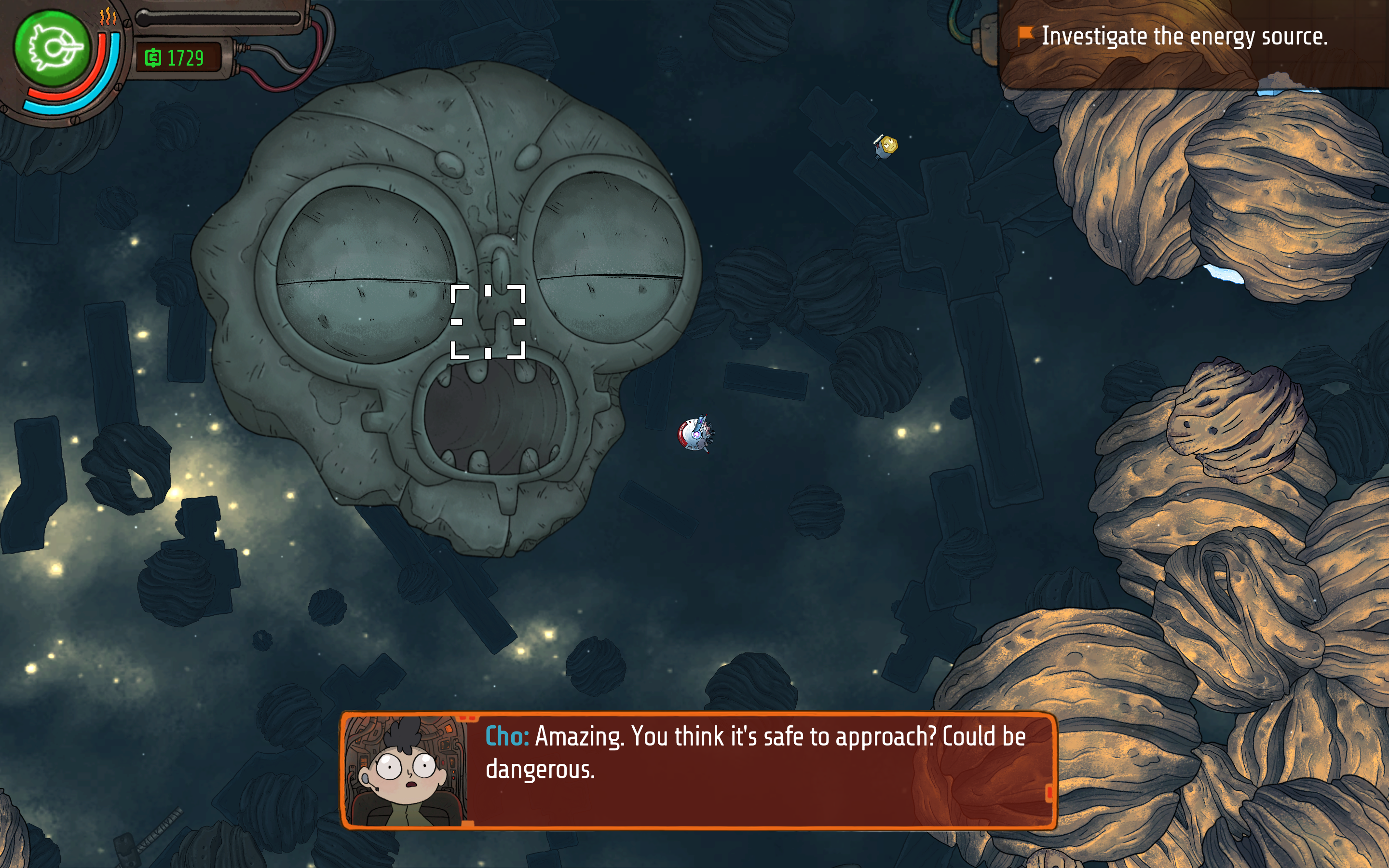 Every area you explore is vast and filled with enemies with different abilities. In some areas, you’ll end up finding giant head-shaped places called domes. These domes hide some sort of secret, and you believe they have the key to take you back home.

The story in No Way Home is entertaining and mysterious. While the missions are mostly going from point A to point B, the story makes you feel the need to keep going to find out the hidden secrets in this galaxy. That being said, going back and forth so much feels more like a chore.

If you’re not into the story, or you’re tired of so much exploring, No Way Home also has a Daily Challenge in which you get to shoot around for a chance to be at the leaderboard with other players around the world.

There are tons of enemies in each area you go through. No Way Home is an easy game to pick up, you just have to move, aim and shoot. However, it’s not an easy task to do when you have 10 different ships shooting at you or ramming against you. 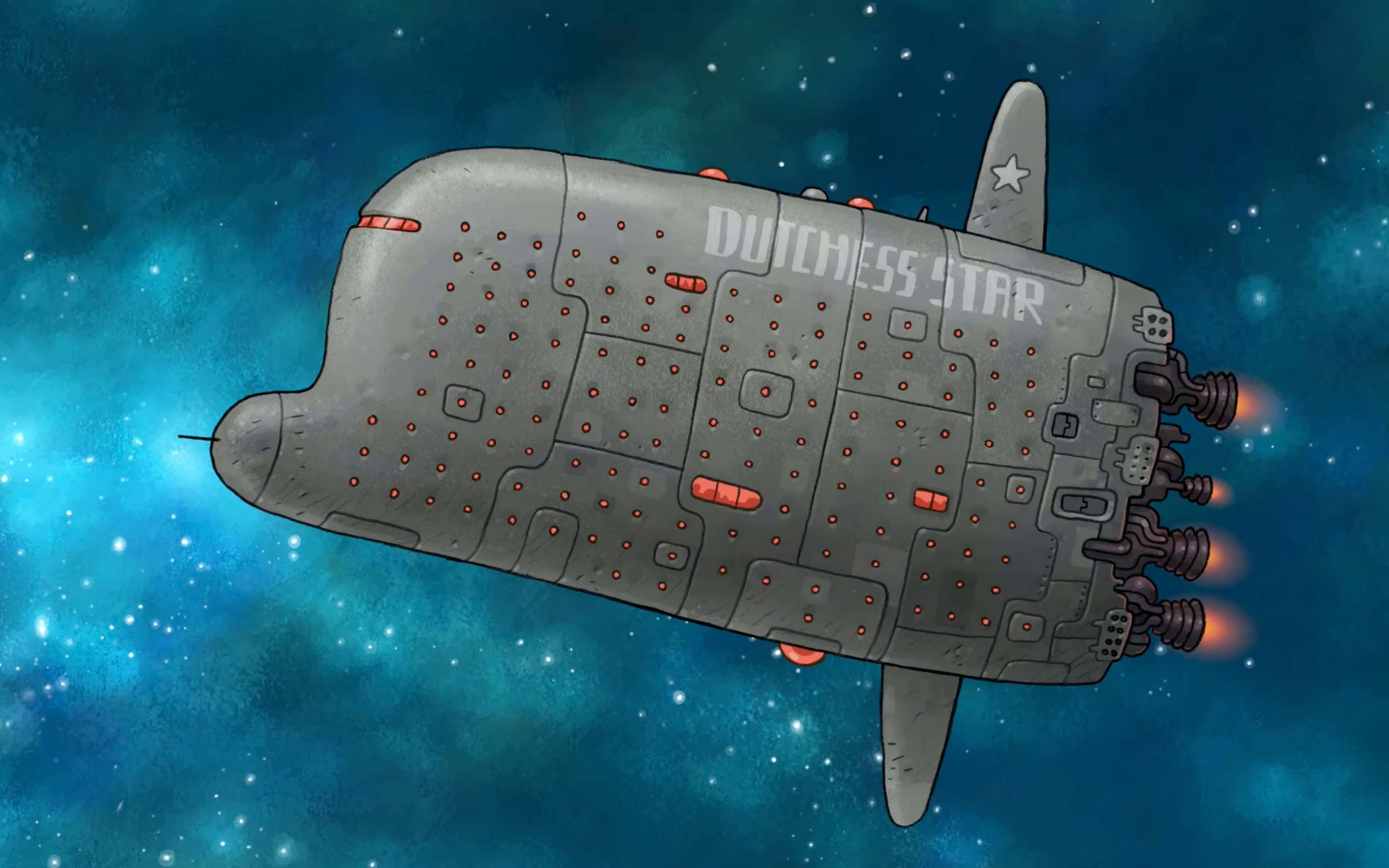 Killing them is sometimes optional, though, as you can fly past them if you’re fast enough. However, you might want to spend some time killing some aliens, as some of them drop credits or items that help you create new equipment or upgrade the one you already have. Plus, it’s fun to kill enemies.

As I mentioned, the galaxy in No Way Home is big, and each area has a lot of space to explore. Not only that, but every galaxy is procedurally generated, so you literally have your own personal universe. Personally I enjoy exploring, but only when I get a reward for it. The biggest reward you get is killing more bad guys, which is good, but I would’ve loved more than just enemies and dead ends.

You sometimes get small rewards, like totem-like figures that give you items and credits, or a small portal that’ll take you back to the shop. However, that’s not good enough when you die 3 times to get to it. 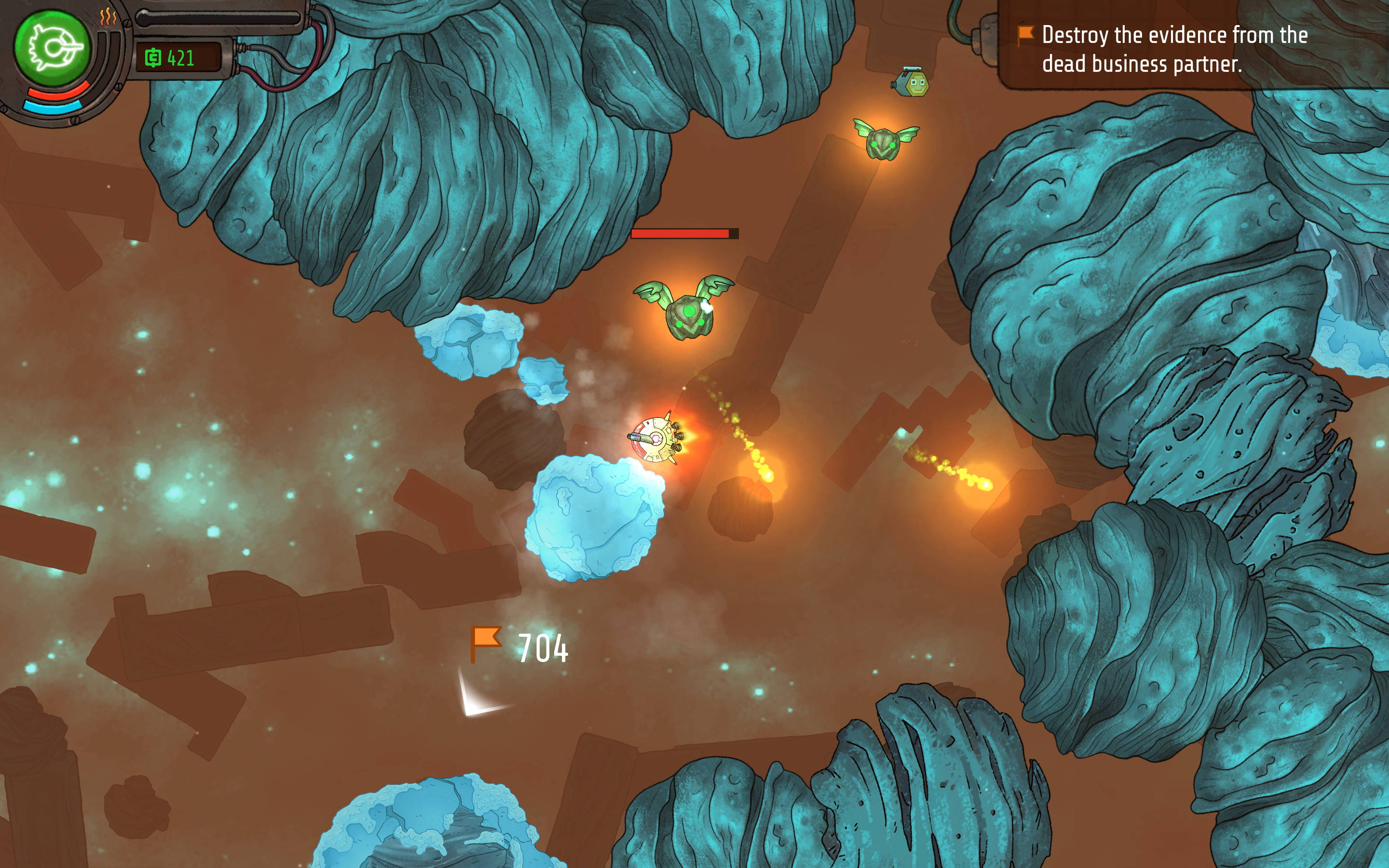 You do have infinite lives, sort of. You’ll have to spend some credits to respawn. This comes in handy when you have to face a lot of enemies. Most of the enemy ships are easy, with the exception of some big red baddies you’ll see if you go too far.

For the most part, you’ll only die if you don’t pay attention to your ship. Although, this does happen. Your ship is rather small, and sometimes you’ll have indicators, smalls rocks and Matey around you, so you might lose yourself in the middle of a battle.

Fortunately, you’ll have some help with your battles. First, your ship has a shield that regenerates over time. Even if you’re running low on health, you can still pull through thanks to it. You’ll also have Matey with you at all times, tt shoots enemies and gets you items.

No Way Home reminded me of the Netflix show Final Space. You’re a human with an annoying, yet lovable robot companion that goes through space and everyone you meet is surprisingly friendly. That being said, both are completely different, and both are great. I encourage you to experience both.

Besides an interesting story and funny characters, the looks and overall feel of No Way Home is what keeps you playing. Everything is hand-drawn, which gives you a cartooney look that fits the game so well. Plus, the attention to detail to the background and your surroundings makes you feel tiny and lost. I mean, you are tiny and lost, but you actually get to feel it.

No Way Home is a must-play Apple Arcade game. While it sometimes might get repetitive by shooting your way through from point A to point B, the engaging story, funny characters, and different game modes make this game a great experience that’s completely worth playing.

NOTE: No Way Home is available on mobile exclusively as part of Apple Arcade, a premium gaming subscription service from Apple. Without being a subscriber to Apple Arcade you cannot download and play this game. Apple Arcade is $4.99 per month and does come with a free one month trial, you can learn more about it on Apple’s official website or by visiting our dedicated Apple Arcade forum.