When Pascal’s Wager ($6.99) was shown off in the iPhone 11 keynote, I had high hopes. A visually impressive Dark Souls-like adventure on my phone or iPad? Sign me up! Despite my hopes, though, I couldn’t help but expect a mobile Dark Souls or Bloodborne—that is to say, a game that took the basic elements and atmosphere from those games, simplified them, wrapped ’em up with micro-transactions, and released them as a complete game. You know, the usual mobile fare these days. Actually playing it, though, I’m quite impressed. Visually, it nails the drab world, the grim atmosphere, the air of inevitable demise; it delivers challenging combat that forces players to learn and adapt to enemy patterns; and, best of all, it’s dark. Like, really dark. In other words, it’s exactly what I hoped for.

Pascal’s Wager starts with a dream-like carriage ride to the domain of Heggem, a vast Colossus that emits a protective light to ward off the dark and its evils. This journey sets the tone for the game to come (dark, ominous, and just a little scary), and displays its graphical prowess—it also, quite unintentionally I’m sure, highlights its faults. It is without a doubt very pretty, but it is also flawed. The textures and character models are detailed, the environmental and particle effects are excellent, and colour, when used, stands out against the rather drab backgrounds. All that said, however, it is as though a film has been placed over every cutscene and most textures. They are blurry, indistinct and, compared to current-generation console games, frankly disappointing. If this were to be released on last-generation hardware, these faults would hardly be noticed.

Similarly, the voice acting is… acceptable. While it isn’t going to dampen an otherwise enjoyable experience, it doesn’t exactly help immersion either. It is frequently stiff, unpolished, and generally disruptive to the atmosphere as a whole. Music and sound effects are another matter entirely, however, and are in turn eerie and satisfying. The soundtrack conveys a sense of quiet horror, of something not quite understood but nonetheless of awful importance. The sound effects are satisfying, lending weight and flair in ample helpings to combat, as well as inviting the player to come a little closer, dig a little deeper, believe just a little bit more.

What, exactly, are players choosing to believe in? Simply put, the world and its atmosphere. Players are given the opportunity to immerse themselves in a land without a sun, evil lurks in the shadows, waiting to infect them, their children, their neighbours, and very well may have already. A land where the only protection from the night comes by way of towering Colossi that roam the land with orbs of unnatural light. A land of monsters both eldritch and human. Every aspect of this is reflected as players roam the world: The sky is overcast, the land is blighted, twisted and unhealthy, its denizens similarly twisted and changed. It is grim, foreboding, and quite hopeless. 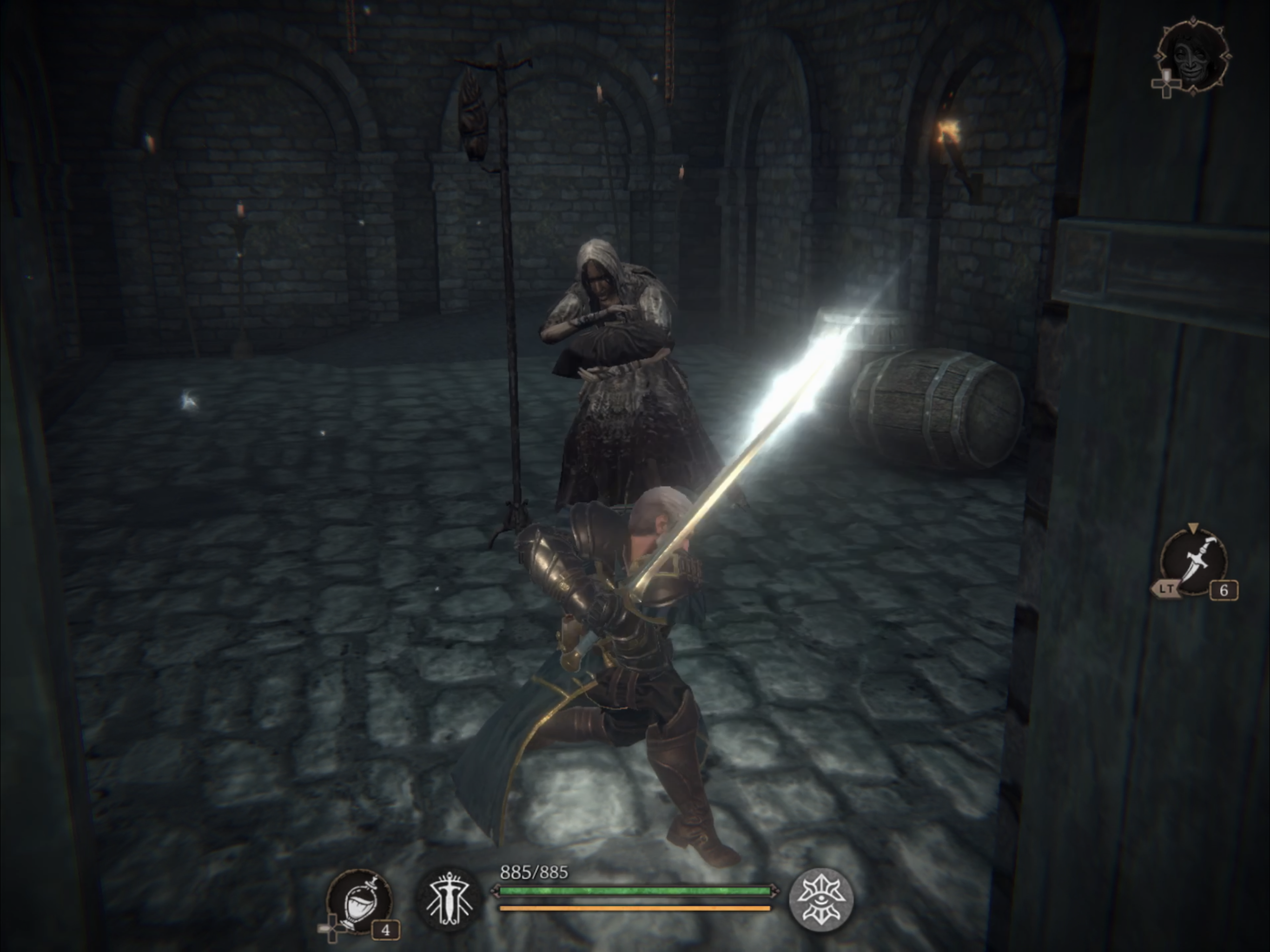 While the graphics and voice acting disappoint, combat is nothing but impressive. Smooth animations, interesting opponents, and rewarding fights—especially boss fights. Each boss has its own unique set of attacks to learn, all of which are used to devastating effect. Failing to dodge or parry an attack is punished mightily with both health loss and sanity loss. Health is self explanatory, but sanity is unique to Pascal’s Wager, and represents a character’s mental state. It has three stages (sane, abnormal, and lunatic), introducing a penalty at abnormal and increasing it significantly at lunatic. The penalty includes a damage increase at the cost of less maximum health and another, character-specific, status effect. Entering a lunatic state is the equivalent of a boss entering a rage state and is incredibly risky but can, sometimes, pay off very nicely. Compared to boss fights, regular enemies are a walk in the park, although players still have to be mindful of their stamina. A poorly timed attack, roll, or parry can be a major problem fighting even one enemy, let alone several, as running out of stamina can leave characters unable to avoid enemy attacks.

Just in case I haven’t emphasised it enough, Pascal’s Wager is not an easy game. Players will die, probably a lot, and they are expected to learn, adapt, and overcome. When they die, or if they choose to rest a while and recover their health and health potions, they will find most enemies (bosses excluded) have also returned. While there is a way to activate an “easy mode" (Look for the Statue of the Bearer in Heggem, by the knight with the axe), it isn’t readily apparent, and it isn’t something most players will find unless they’re looking for it. Nevertheless, players who persist will find it to be a rewarding experience that includes numerous secrets, hidden areas, and side-quests, not just great combat. 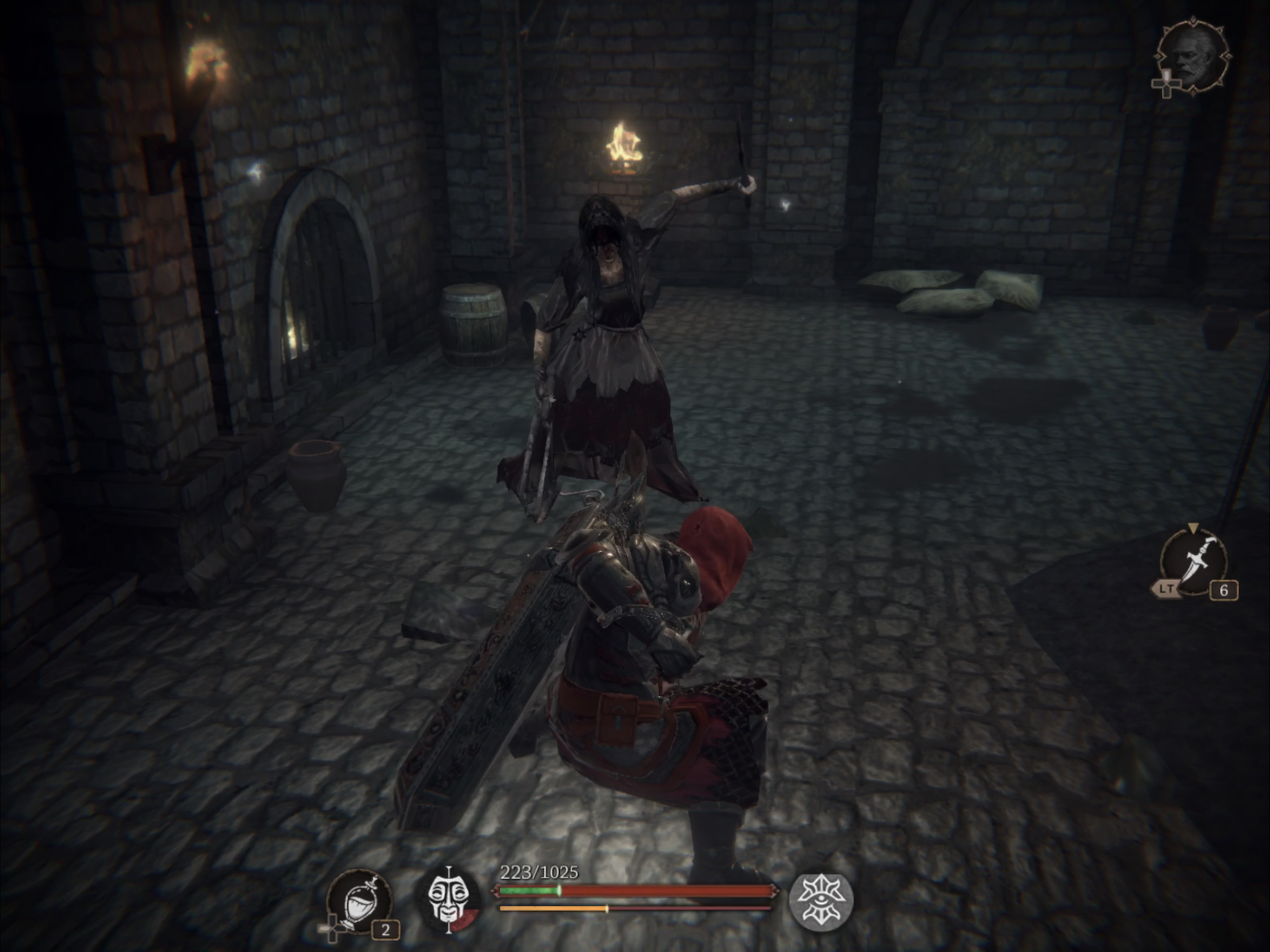 Adding a little spice to the usual Dark Souls formula are the three other playable characters. Each character has their own unique skills, fighting style, and upgrade tree, although they share experience. Meaning all four characters have the same number of stat points to invest, but investing an immundus (a skill point) in one character means it cannot be invested in another. Characters can be swapped to at any point except during combat, although a new character will automatically enter the fight upon death, unless all characters are already dead. While each character plays similarly, they each have a very different feel. Terrance, for example, specialises in light attacks and dancing around enemies, whereas Norwood prefers to pummel them into submission, or bash them to pieces with his iron coffin.

Overall, Pascal’s Wager feels great to play despite its quirks. The combat is great and more than makes up for the graphical flaws and dubious voice acting, the character swapping mechanic is new and interesting, and it is delightfully dark. Despite its problems, I can’t wait to spend more time with it, and very much look forward to where it’s taken in the future. It has without a doubt exceeded my expectations and, with a little help, could readily meet my hopes. All it would take is a bit of polish, a few fixes, and a lot of editing.