There are now two LEGO games in the Apple Arcade store: LEGO Brawls, and  LEGO Builder’s Journey, and they couldn’t be further apart when it comes to tone.

LEGO Brawls is a frenetic, zany combat game that does its best to mimic a Super Smash Bros. vibe using over-the-top item-based combat on varied stages. It has a lighthearted, joking spirit that’s more or less in line with every piece of LEGO media that’s been released since LEGO Island made its way to PC in the late 90s.

But now, LEGO has its own in-house developer, Light Brick Studios, and they’ve taken a completely different approach to LEGO with their first game, LEGO Builder’s Journey. The result is a more meditative, slow-paced, and nostalgic game offering players puzzles to solve through building structures with bricks to navigate paths through each level. 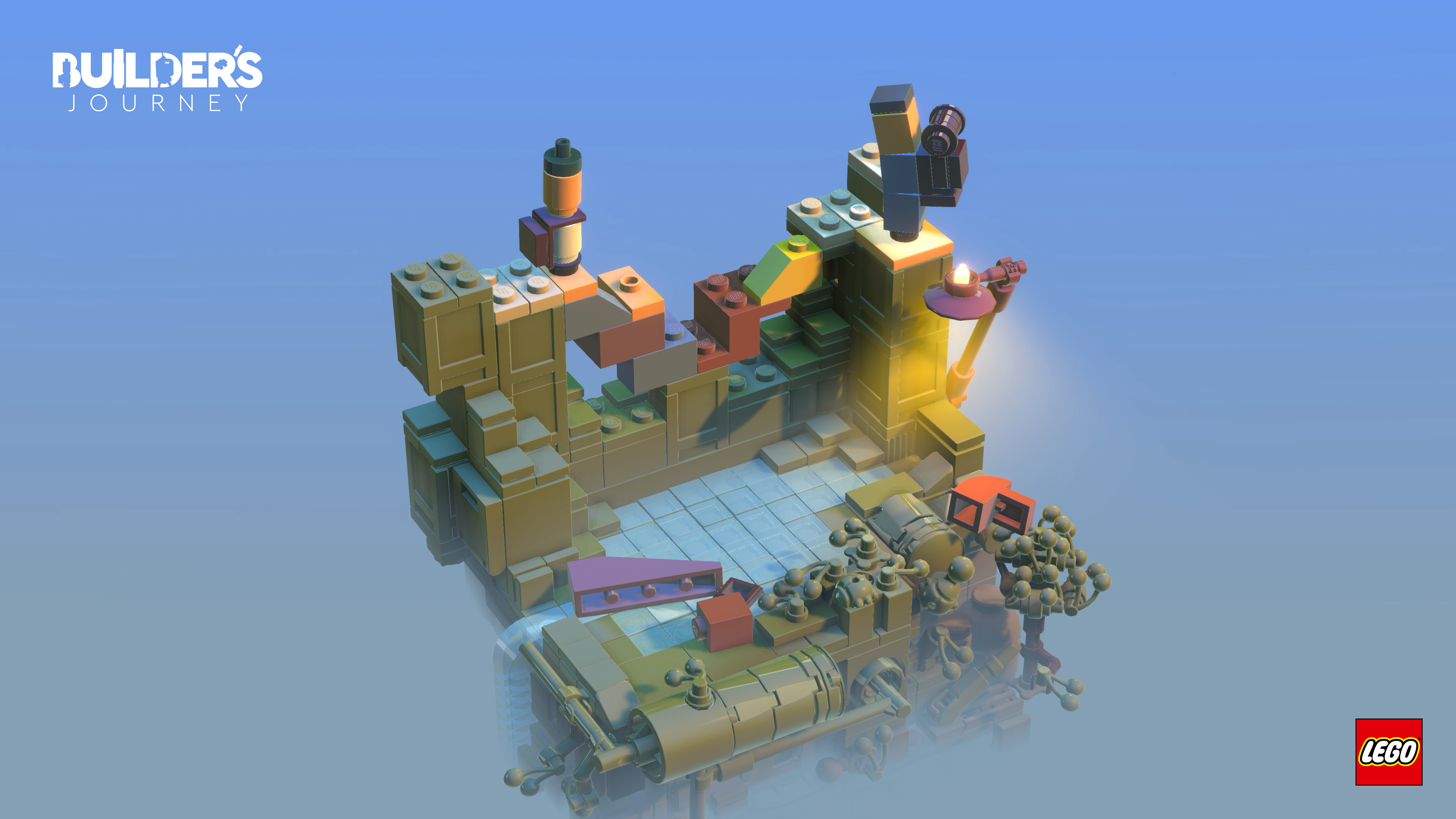 The change in tone is made immediately obvious the moment the game opens, with its somber dynamic lighting, thoughtfully-designed landscapes, and atmospheric sound design filled with reverberating sound effects and slow, ambient music. The game is, in short, absolutely gorgeous — an unusual bit of praise to give a game with characters and environments made up entirely out of LEGO bricks, but one that’s well-deserved. Light Brick Studios has taken a familiar toy and turned it into the building blocks of a believable, enchanting world.

The most telling change, however, is the complete absence of LEGO’s iconic minifigures. The characters are instead represented by a minimalist stack of blocks, showing emotion through posture and movement.

This movement is used to remarkable effect, telling a wordless story of a mentor figure teaching the player the ins and outs of building and creativity.  Then, the mentor is forced to leave the character behind after being called off to perform what amounts to meaningless, thankless drudge work as the player sets out on their own adventure. 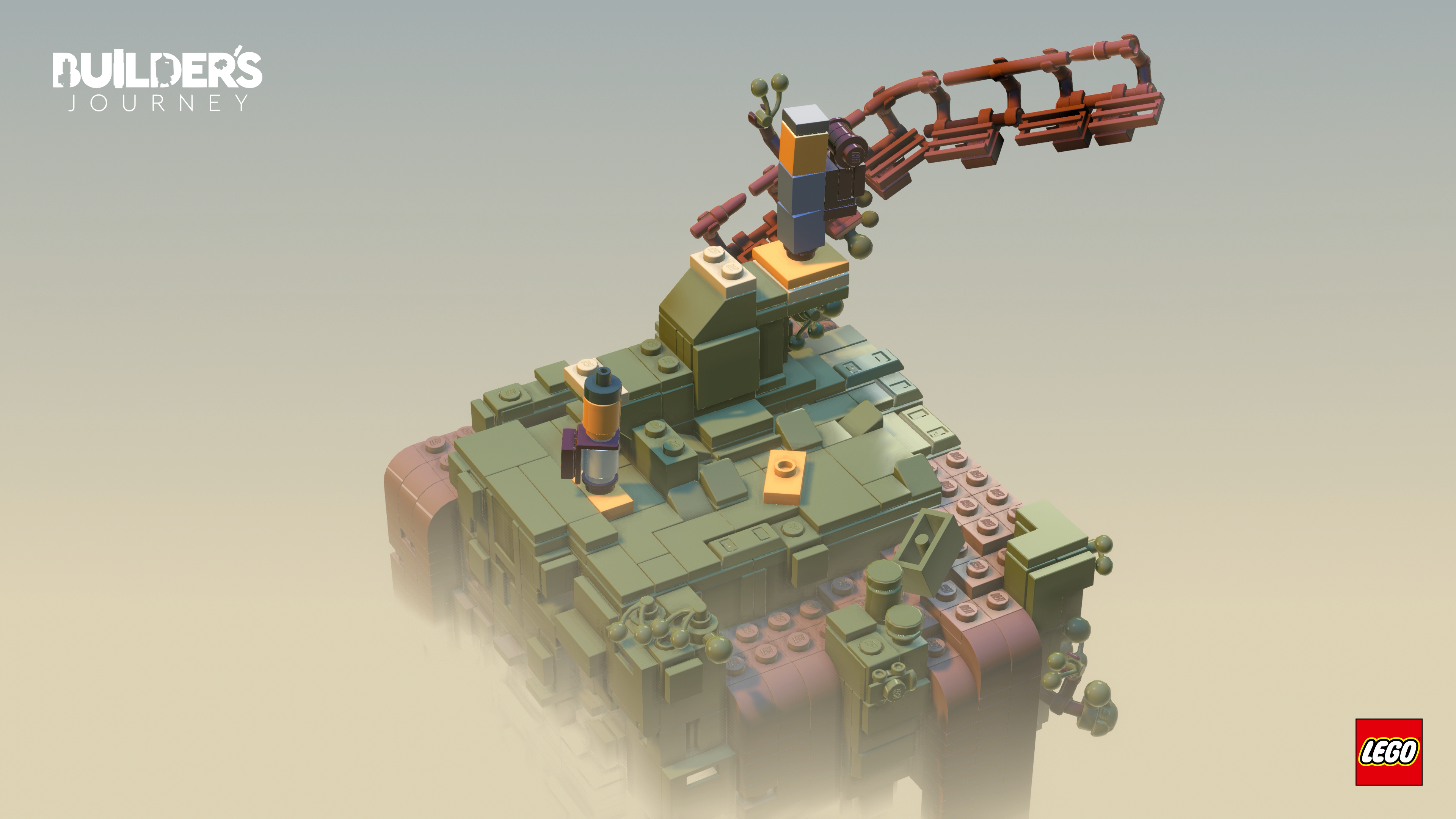 Some people have compared LEGO Builder’s Journey to Monument Valley, and not entirely without reason. They’re both gorgeous, isometric puzzlers that guide players through an ambiguous but oddly-moving story, and they both have a level of polish that is not often achieved in mobile games. However, while the types of puzzles players face both involve progressing through the world by manipulating the environment, Monument Valley has its Escher-inspired worlds that lead to puzzles which require a bit of mind-bending logic to solve. In Builder’s Journey, the puzzles are often a lot more straightforward, so players rarely are treated to the kind of “Aha!" moments that made Monument Valley click with so many.

The gameplay of Builder’s Journey is fairly simple — select, move, rotate and drop bricks to where they’re needed, while using special orange bricks to guide your character. The challenge comes in figuring out how to use the limited bricks available to either solve a challenge or create a path to the goal. 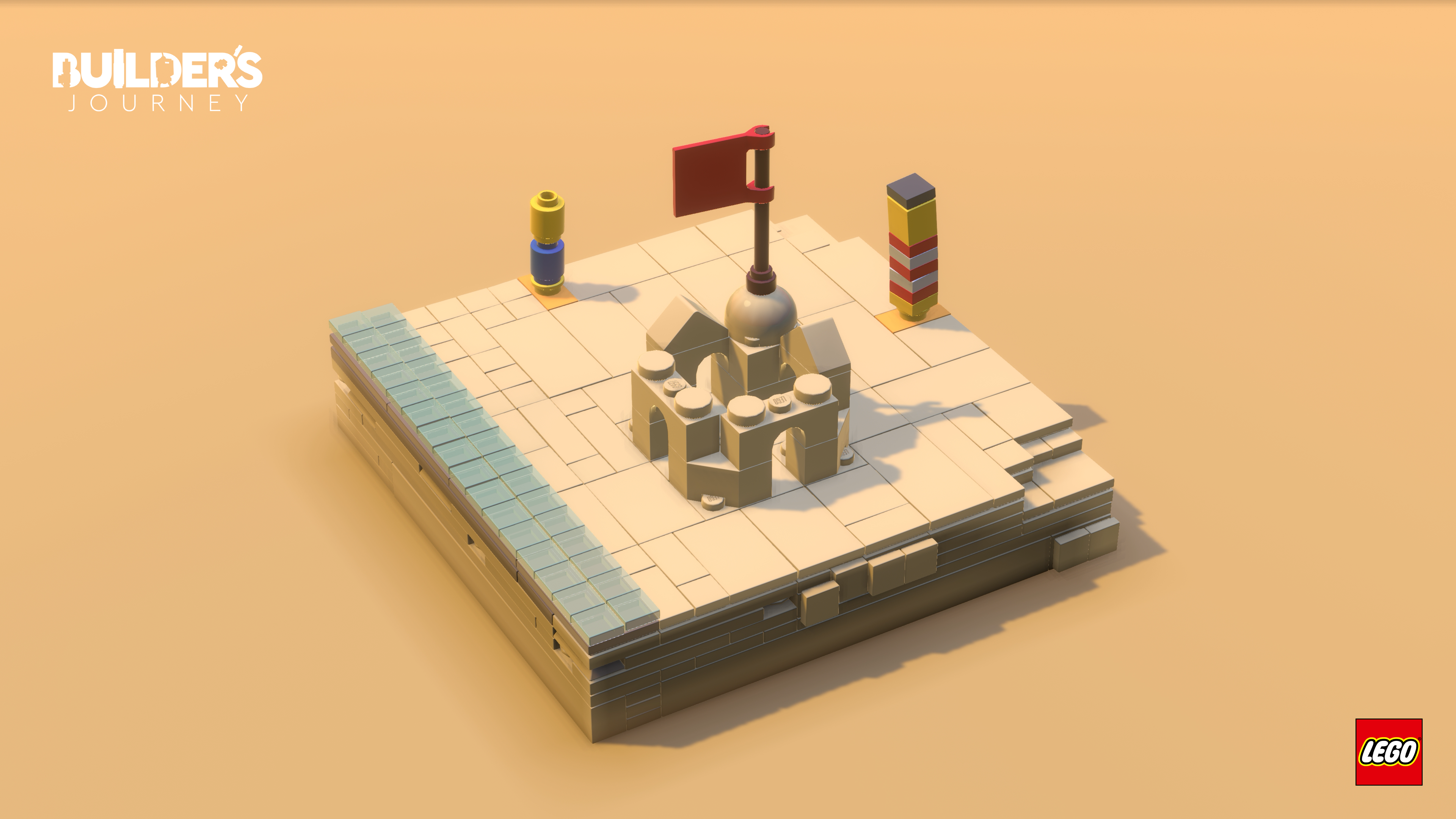 Sometimes puzzles require outside-the-box thinking, sometimes they requires level-specific gimmicks, and sometimes they require hunting for hidden bricks, but the puzzles never get unreasonably hard. Often, in fact, the game lets players come up with their own solution instead of forcing them towards a specific answer — a design choice that fits well with both the game’s underlying message of creativity and the philosophy behind LEGO bricks themselves.

There’s a great, tactile feel to the building mechanics, though the game is in no great rush to connect the blocks or let you drop an unwanted one. This is perhaps intended to match the overall sedate mood of the game, and for the most part it works. However, there are times when timing and quick action matter, and those are the times where the game’s easygoing attitude towards player input can cause some frustration, though never enough to make players close down the game in anger.

I’ll avoid spoiling the story, but it’s one that will hit home with anyone who has grown distant from a close friend or a loved one because of their work, and also for anyone who has pursued a career in what at first appeared to be an exciting field, only to discover that the actual work being offered is an absolute slog. I would not be surprised to discover that whoever came up with the plot had a previous job that did not test their abilities or stir their creative juices.

But for all its virtues — and it has many virtues, LEGO Builder’s Journey feels a bit short by the end. There’s 34 stages, which sounds like a lot, but each one can be solved in just a few minutes, leading to a game that can be easily beaten in an afternoon. Despite its free-form approach to puzzle solving, the game offers very little incentive to replay it, so it’s not really a game you’ll keep installed on your phone for long.

It is, however, a game that’s well worth the time it takes to play. If you’re already a subscriber to Apple Arcade, LEGO Builder’s Journey is a must-download, if only just to see how much a game can accomplish in a story while taking such a minimalist approach.

Light Brick Studios has proven itself to be capable of great things. It’ll be tough for them to top themselves, but I look forward to seeing them try.

NOTE: LEGO Builder’s Journey is available on mobile exclusively as part of Apple Arcade, a premium gaming subscription service from Apple. Without being a subscriber to Apple Arcade you cannot download and play this game. Apple Arcade is $4.99 per month and does come with a free one month trial, you can learn more about it on Apple’s official website or by visiting our dedicated Apple Arcade forum.