Cardpocalypse is the game each and every battling card game enthusiast has been waiting for. You begin the game as Jess Carter, a young girl just enrolled at Dudsdale Elementary School. It doesn’t take long for you to find out that everyone at Dudsdale loves Power Pets, the latest craze card game and television show… that is, everyone except the teachers. They more or less tolerate it at first, but after the initial tutorial stages you end up getting the game banned from the school.

Don’t worry, folks, the game doesn’t end there. In fact, it starts there. Your cards were taken but your will never was, and neither was the will of literally every other student in the entire game. You’ll start out once more with a pretty limited deck but there’s so many great ways to build it up that I feel by the end of this review, you’ll already be downloading the game.

For starters, there’s a whole buttload of missions to partake of in the 5 in-game days you’ll be playing. I’m talking somewhere between 50 and 100. Each of these missions offers unique rewards including cards, candy (to be traded for cards), stickers, and more. A lot of the missions can be completed multiple ways and different reards, or nothing at all, might be earned. Missions are also different in every way. You might be doing just a simple battle or dousing a shirt in paint to make it uglier. Many of the missions fit in really well with the school setting and it’s one of the many things I love about Cardpocalypse. 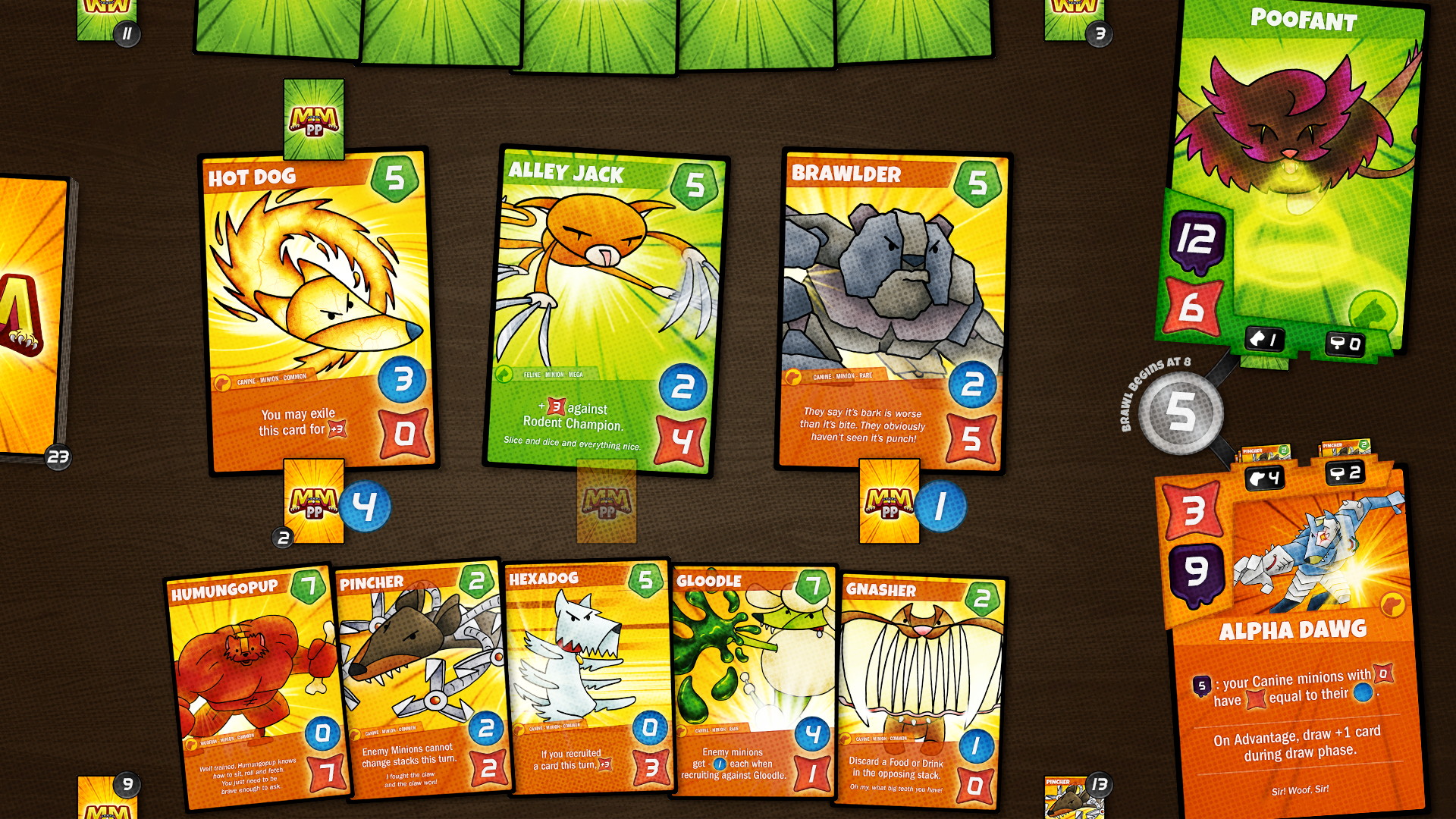 Another way of earning more cards is to trade. You’ll find a whole host of different vendors around the school. Some will only allow candy-trades, some will be locked until you complete a quest, and some might carry just the card you’re looking for to complete your deck. Trades are a 1:1 ratio in terms of rarity so the 1 legendary is worth 2 rares which is worth 4 commons. It’s easy to stock up on a whole lot of cards, too, so by the middle of the game, you’ll be able to trade pretty much anything with anyone.

Battles in Cardpocalypse are really fantastic and can take anywhere from 2 minutes to 10. Your champion card is the main focus here and, if it dies, you lose. You can carry 20 cards with you into battle and draw either 3 or 4 cards at the start, with one more each round after that. Each turn you start with 1 more food than the last and you can deploy either minion or mutation cards with said food. It’s about what you’d expect from a traditional card battler. You choose what each minion will attack, and what your champion will, and then end your turn when you’re out of food and attacks.

I’m happy to say that building your deck is going to start out slow and become WILD after a while. This game comes with hundreds of different cards of four different factions — Woofians, Meowtants, Pipsqueaks, and Sinnisers. Each one has their own strengths and weaknesses and working your deck around those can make you nearly unbeatable by the end. You’ll want to pick one early and stick to it, or two at the most, as trying to spread out all decks evenly will leave you too weak to progress easily. 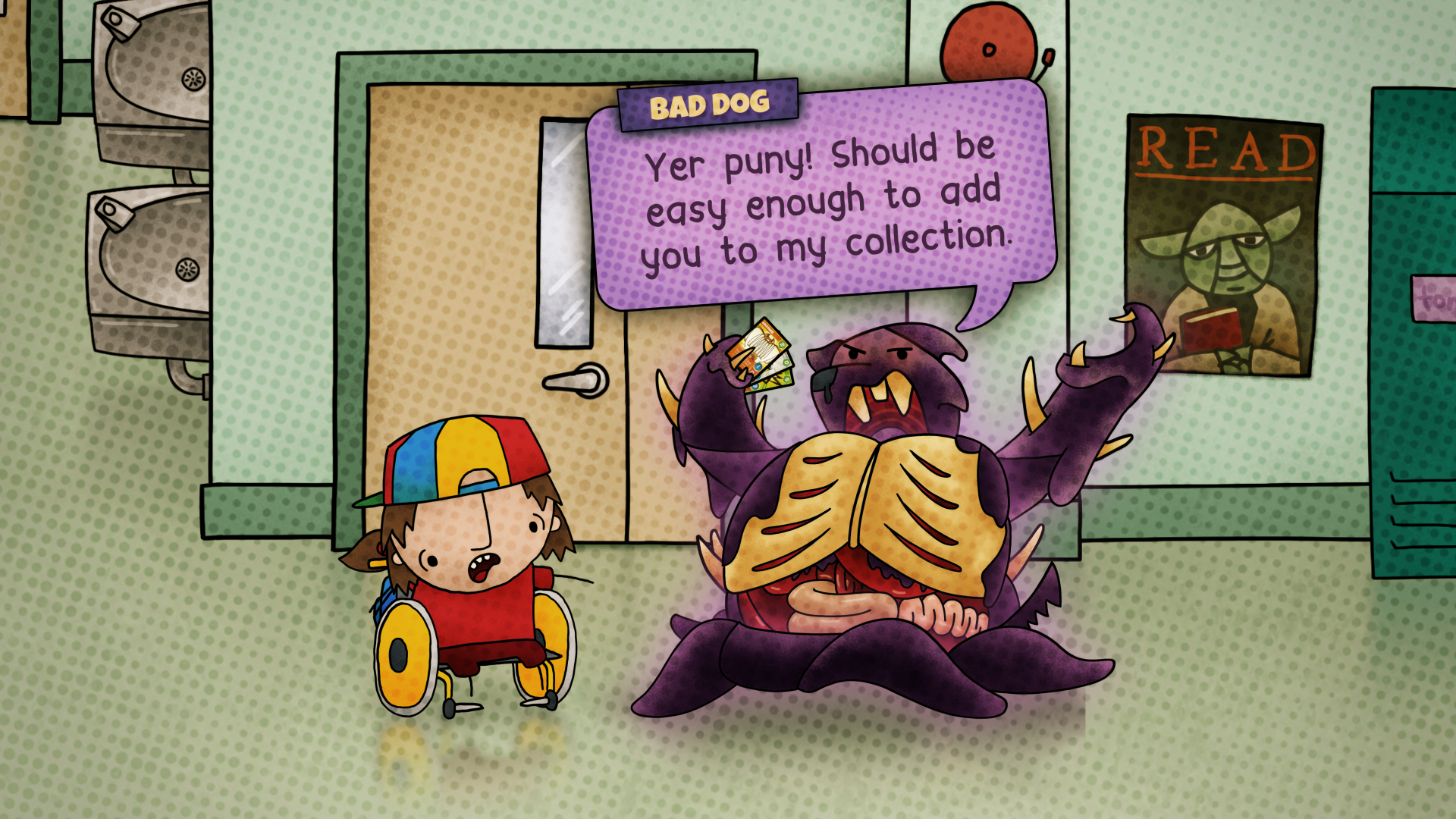 In short, the Woofians are solid defenders and buffers and the go to for anyone that’s a beginner at card games. They’re great at keeping your hero healthy and your minions powerful. Meowtants are the ninja of the game and often have charge minions that can attack you on their first turn or hidden ones that cannot be attacked when they’re first deployed. Pipsqueaks, which ended up being my choice, have a lot of swarm skills which give them +1 attack for each minion deployed on that turn. They’ve also got a lot of food-related skills, giving them huge boosts at the cost of permanent food while they’re alive. Lastly, Sinnisers are the sneaky, lethal guys. They can outright kill troops if they hit them and deal damage as well as both buffing and debuffing minions.

To take it a step further, next comes the best part of the game — stickers. Stickers can be attached to ANY card to change it drastically. You can add a health, attack, change the name, or even a skill to your cards. Later in the game, you’ll even find special stickers that will change a card’s faction so if you just got an amazing Legendary card for a faction you’re not using, you can change it to yours. It’s a fantastic feature that, again, fits perfectly in the school setting and gives you a lot more options in your strategies.

The final part of the game which will be customizable I hesitate to tell you about. To keep things simple without giving you any spoilers, the rules of the game will change based on your choices. This could help or hurt you, but as long as you pay attention and choose things based on your strengths, you’ll be fine. Personally, I became more or less a god with mine!

The story in this game is solid as well and will keep you wanting to play for the 20 or so hours it will give you. It’s a little bit on the obvious side as there’s a mysterious purple goo around the school. You and I both know what that goo is, but that doesn’t stop you from having to explore all around the school to try and figure it out. Even so, the story kept me interested and the characters you make friends with keep things lighthearted and fun.

The music and graphics are pretty fantastic and fitting, too. A lot of the music is rock and hits you right at the start of the game. They’re all custom songs, too, which just make the game all the more fun, especially when you pick up a new champion and get to hear a totally MEGA intro. The graphics are reminiscent of South Park with their patented cutout style and look great. As such, the battery consumption is so heavy that even with my new iPad plugged in, it was still draining, though not all that fast.

Cardpocalypse is perhaps my favorite game on the Apple Arcade. The deep strategy and customization offered here is amazing and gives me so much replayability that I could easily see myself playing it at least four times and still not running out of new things to try. If you enjoy battling card games or just think you want to try one out, this is the game for you.

NOTE: Cardpocalypse is available exclusively as part of Apple Arcade, a premium gaming subscription service from Apple. Without being a subscriber to Apple Arcade you cannot download and play this game. Apple Arcade is $4.99 per month and does come with a free one month trial, you can learn more about it on Apple’s official website or by visiting our dedicated Apple Arcade forum.