Our forums don’t usually get top billing in a review, but I have to hand it to our community. The discussion thread in our forums has been raving about Void Tyrant (Free) so much, I had to take a look. Wow. I was blown away by this free to play, pay once to fully unlock game. The folks at developer Quite Fresh and publisher Armor Games have a knack for simple but pretty layouts, and their space adventure has some real chops underneath the smooth veneer.

You play Void Tyrant by drawing cards from a deck consisting of numbers between 1 and 6. Your goal is to get as close as possible to 12 without going over. If it sounds a little like a The Price is Right game, you’re on track with how the game flows. You also have a deck of usable cards that offer a variety of buffs and help tilt the odds in your favor. Your opponent also has cards that will skew results to mess with you. My least favorite of these has to be the Incendiary card which reduces your maximum goal by 1, from 12 down to 11. It sounds insignificant, but the margin to win is usually only 2-3 numerals to begin with and you could see a 30-40% reduction in wins when you have that debuff on you because your opponent still can go up to 12. 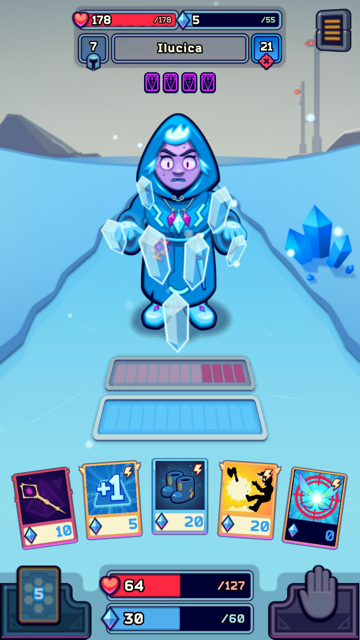 Void Tyrant is a light role playing game that takes you on an interplanetary trek through various biospheres in an effort to rid the cosmos of evil. You do this by taking turns flipping cards over and comparing the results. WAIT WAIT, COME BACK!! It’s actually a very addicting game that offers a number of ways to manipulate a very simple core combat concept. Between gear you gather up, special cards that can be levelled up and discovered, and followers you can escort along the way you’ll see a power curve within each run you make in game. When you can combine these with base upgrades and unlockable classes and races that persist from one run to the next, there is a very palpable feeling of progress that keeps you chasing the carrot for hours and hours.

The mechanics open up more and more as you unlock new classes, new races, and new travelers that accompany you. Your most basic cards offer simple numerical increases to your card count total, other cards can debuff your opponent or give you insight into the next card you or your opponent draws. The deck building side of Void Tyrant is robust but not overwhelming. Each time you play a number card, you can choose to discard one from your hand and replace it with another. There are special events that allow you to pare down your deck or make duplicates. Generally speaking, the further you go into your adventure, the better the cards become.

Each planet you visit has its own secret areas, quest objectives, and end boss. Once you conquer enough planets you move on to the final destination. Getting there is tough enough and since the latest content update, the difficulty of the game is quite challenging. Only through the base upgrade and unlock system will you stand a chance of clearing the adventure. Side quests and a number of prestige like systems allow you advancement from one play through to the next, and this is the primary route of advancement the game offers. Like most roguelike games, Void Tyrant sets up an impossible mission at first that slowly becomes more and more attainable as you set more and more power pieces into place.

The game does have in-app purchases as almost all free games do, but they are what I would consider the best kind of IAP. The game only has 3 items that can be purchased as one-time buys and if you get all 3, you basically unlock the ad-free full experience for only 4.99. The items you get allow you access to fortune cards, a coin doubler of sorts, and one ressurection each time you play a run through of the game. While these are indeed nice things, they dont break the game by having them, nor do they cripple you if you go without.

Void Tyrant is a fantastic game. At $5 it’s hard to find a better value for entertainment or longevity as I have already invested numerous hours delving in and unlocking base upgrades. We don’t usually find something like this under $10, much less as a free to play with an option of being a single purchase game. I will have this game on my phone for a long time to come, and for good reason. If you like card games, or roguelikes, or space adventures, Void Tyrant has something for you.