Kids, looting in real life is bad. Never do it. Looting in video games? Well, that’s a different story. Sometimes the loot grind can be a drag, but when it’s the entire point of the game and is played for laughs to boot, as it is in Ubisoft’s action RPG Mighty Quest For Epic Loot (Free), it can actually be a lot of fun.

The game is set in the land of Opulencia, which was once overflowing with the kind of riches that all fantasy RPGers dream of: awesome weapons and armor, gold, all that good stuff. But the king has been overthrown, or perhaps killed off. Even his former subjects aren’t really sure, but what is clear is that there’s opportunity for you to grab some of that loot back from the monsters who seem to have claimed it, and possibly even see how that throne looks with you sitting in it.

But we’re getting a little ahead of ourselves here. You can’t do any looting until you know the basics, and you’ll want to know how to get the epic loot in the game’s title without dropping too many greenbacks. Let us be your guide on how to succeed in this mighty quest. 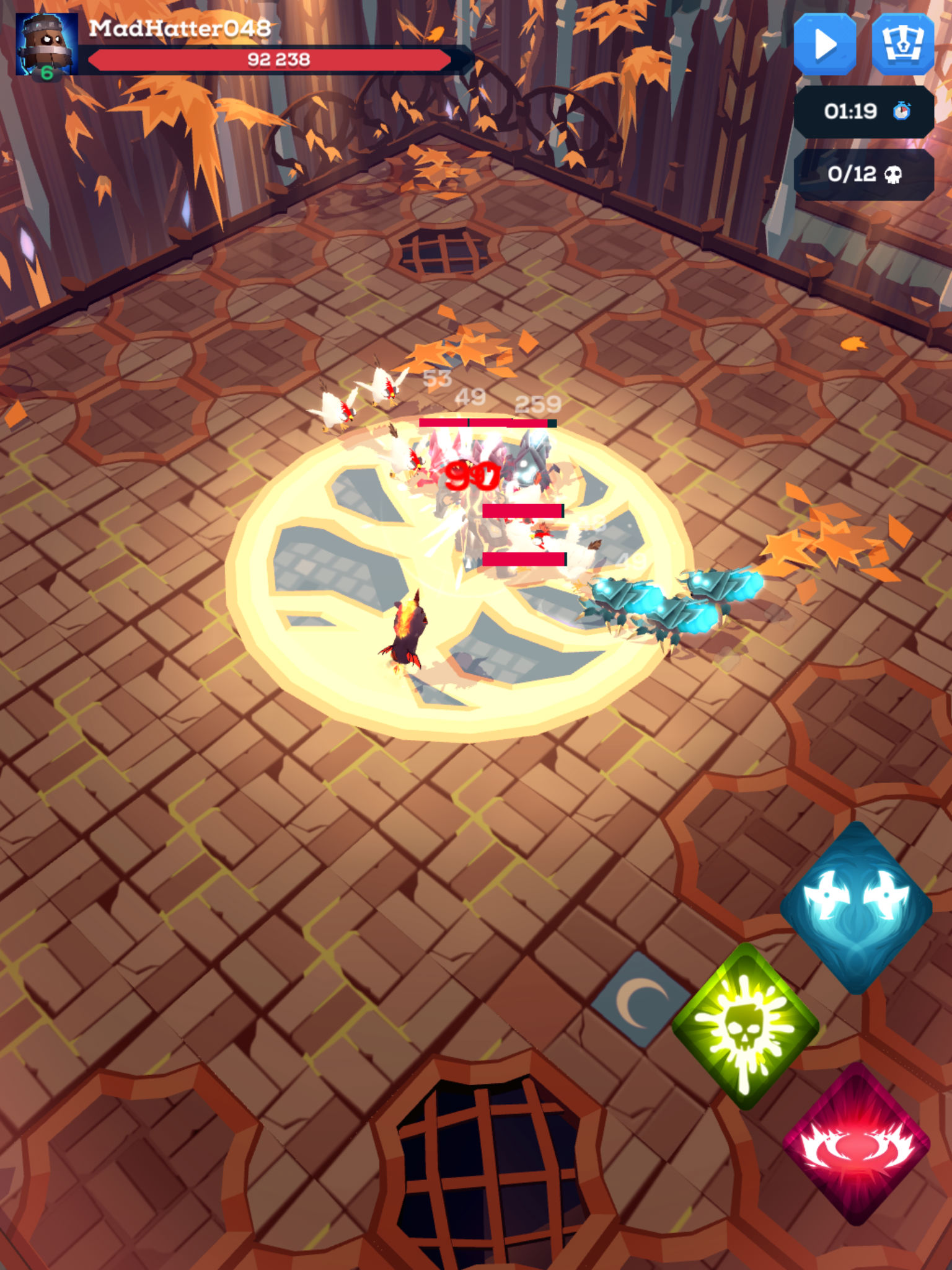 Mighty Quest For Epic Loot asks you early on if you’d rather play right-handed or left-handed, and it’s not just being polite. This is absolutely a game you can play with just one hand, using your thumb to drag on the screen to move your looter around, and then tapping anywhere on the screen to attack the closest enemies.

The only other aspect of combat you’ll really need to master is the use of Skills. These are extra, more powerful attacks activated by dedicated virtual buttons on the opposite side of the screen from your preferred side. You can have up to three Skills equipped at any one time, though there are more than that to unlock as you advance. Every Skill has a cooldown timer before it can be activated again, and the button will grey out until it’s next ready for use. Leveling up your Skills can increase the damage and duration of their other effects, as well as reducing their cooldowns.

Bonus tip 1: Take a look at which skills can be used together to set up combos. For example, Black Hole pulls your enemies toward it, while Landslide slows them down. Either can be useful for keeping groups of monsters in one place, allowing you to hit them all with a second, more damaging Skill.

After gaining a few levels, you’ll also be able to equip Talents, which are not separate attacks but rather buffs to the damage of certain special effects caused by Skills. You can level these up as well, so it makes sense to equip and power up Talents that coincide with the Skills that suit your play style the most.

Bonus tip 2: To autoplay or not to autoplay? That is the question, as a certain bard once said. A few levels into your Mighty Quest experience, you’ll acquire the ability to autoplay levels by tapping the ‘play’ icon at the top of the screen. Doing so means your looter will run around and fight automatically, which is cool. Unfortunately, you’re almost guaranteed not to find every chest or kill every monster this way, since he takes the most direct route to the end of the level at all times. On the plus side, you can assume control of your looter at any time, so autoplay is helpful in small doses even if you don’t want to rely on it too often.

Gimme the Loot: An Overview of Weapons and Armor 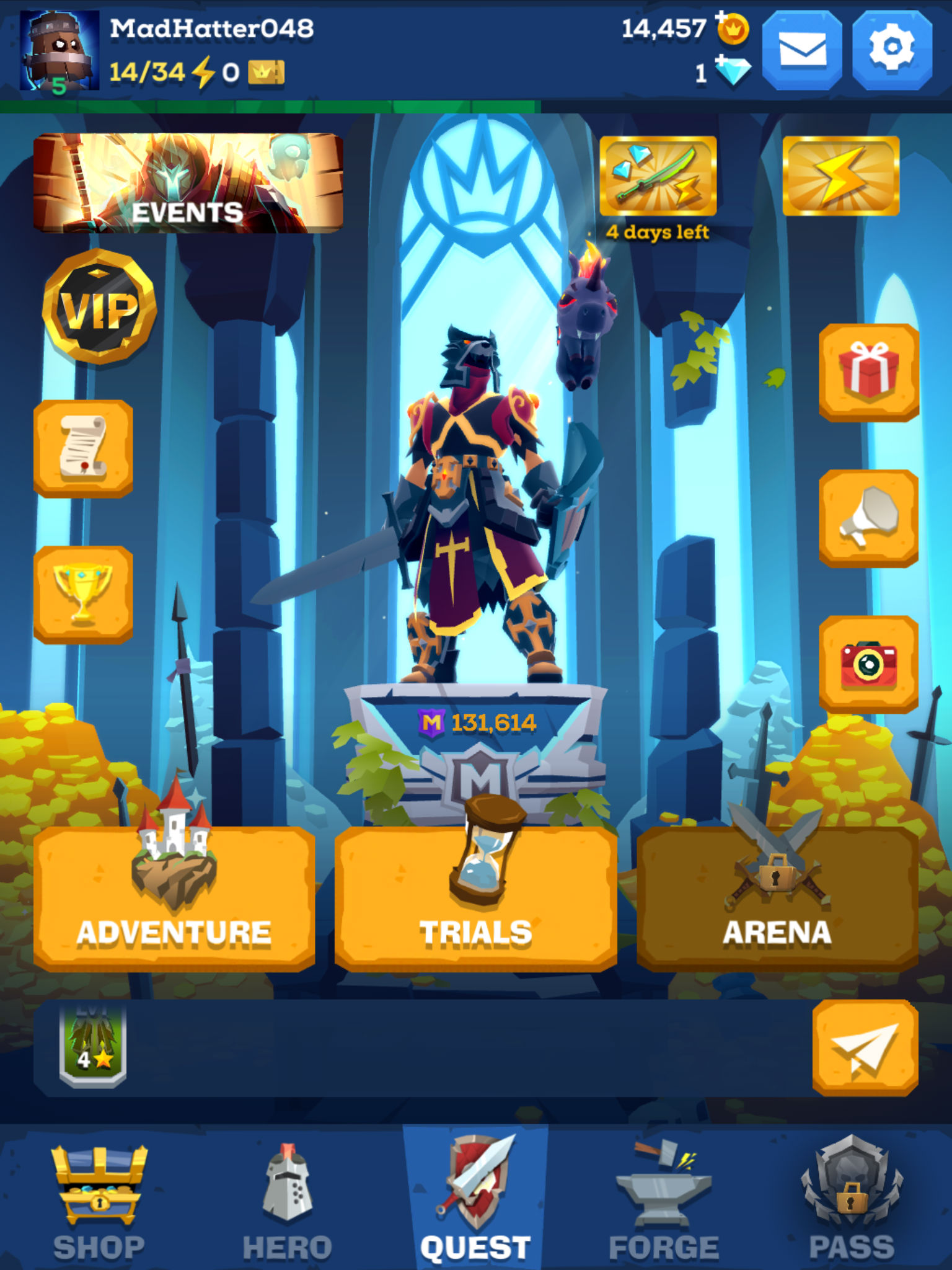 As you might expect, the damage you do and your HP and other stats are determined entirely by your weapons and gear in Mighty Quest. So you might say looting isn’t just a job, it’s a way of life. Ahem.

There are six gear slots to fill on your looter:

Every piece of Gear has a Might score, which is a numerical value that indicates approximately how tough it makes you in the grand scheme of things. Note that your overall Might could still be misleading — if, for example, you have some really great Greaves that increase your HP by an insane amount but your DPS is still low, you’ll be hard to kill but still take a while to chop through enemies. In other words, every stat matters, but having a Might higher than the suggested score for any particular level means you’ll probably be able to clear it without too much trouble.

The potential of any gear comes down to two things: its color and its rank. Currently, gear comes in three colors:

Within these colors, gear can also be found in ranks ranging from one to five stars. However, it’s also possible to bump gear up to the next rank by maxing its level out and then using special items called Promote Stones to add a star to it. In fact, you can even raise 5-star items to 6 stars in this fashion. Leveling up gear is done by the time-honored method of sacrificing other gear and items called upgrade boosters, then paying a certain amount of gold.

Now that you understand the basics of loot, let’s discuss where to find it without paying for it …

How to Get Epic Gear for Free

It’s possible to get even the best items from the Legendary and Epic ranks without sinking money into the game, but it’s kind of a multi-step process. For starters, you should know that you can earn gear simply by adventuring, as you’ll often receive one to three pieces simply for clearing a level. This tends to be lower rank equipment, but can still be useful early on or as fodder to feed and upgrade your better stuff.

You’ll also find 2 to 3-star gear in Rare Chests, which you can find in the Shop, accessed via the treasure chest icon on the game’s bottom nav bar. You can open one Rare Chest every time you acquire five Rare Keys, or by paying 20 Gems. The best loot is in Epic Chests, which guarantee a 3 to 5-star items and take 100 Epic Keys or 150 Gems.

“Who, whoa, whoa. Hold up a second. Keys? Gems? What are you talking about?" Fair question! Keys can be acquired as rewards from the game’s Daily Rewards chart, or by completing Daily Missions or Achievements. They are specific to each kind of chest, so keep that in mind.

Gems, on the other hand, are the game’s premium currency, which simply means you can purchase them for real money if you choose to do so. But you can also acquire them for free via the following methods:

This isn’t an exhaustive list, so be sure to keep tabs on the Daily Missions and Achievements too (though Achievements at the time of this article seem to pay off in everything but Gems). In any case, no matter how you rack up free Gems, you’ll want to save them to open Epic Chests. There’s still luck involved, but it’s absolutely possible to grab 5-star Epic or Legendary gears from these chests, and even one piece can make the early game a ton easier for you. If you have the patience, saving 1,350 gems to open 10 Epic Chests is an especially good deal since you are getting 10 for the price of nine.

How to Get Free Energy

Yes, there’s an Energy system in Mighty Quest For Epic Loot, and while that’s a little bit of a bummer, it’s also not at all unexpected for a game like this. You’ll use Energy any time you start a level, even if you are using an auto-clear ticket. Your max Energy does increase every time you level up as a player, which is nice. You can also exceed your max Energy temporarily by receiving more as a reward. 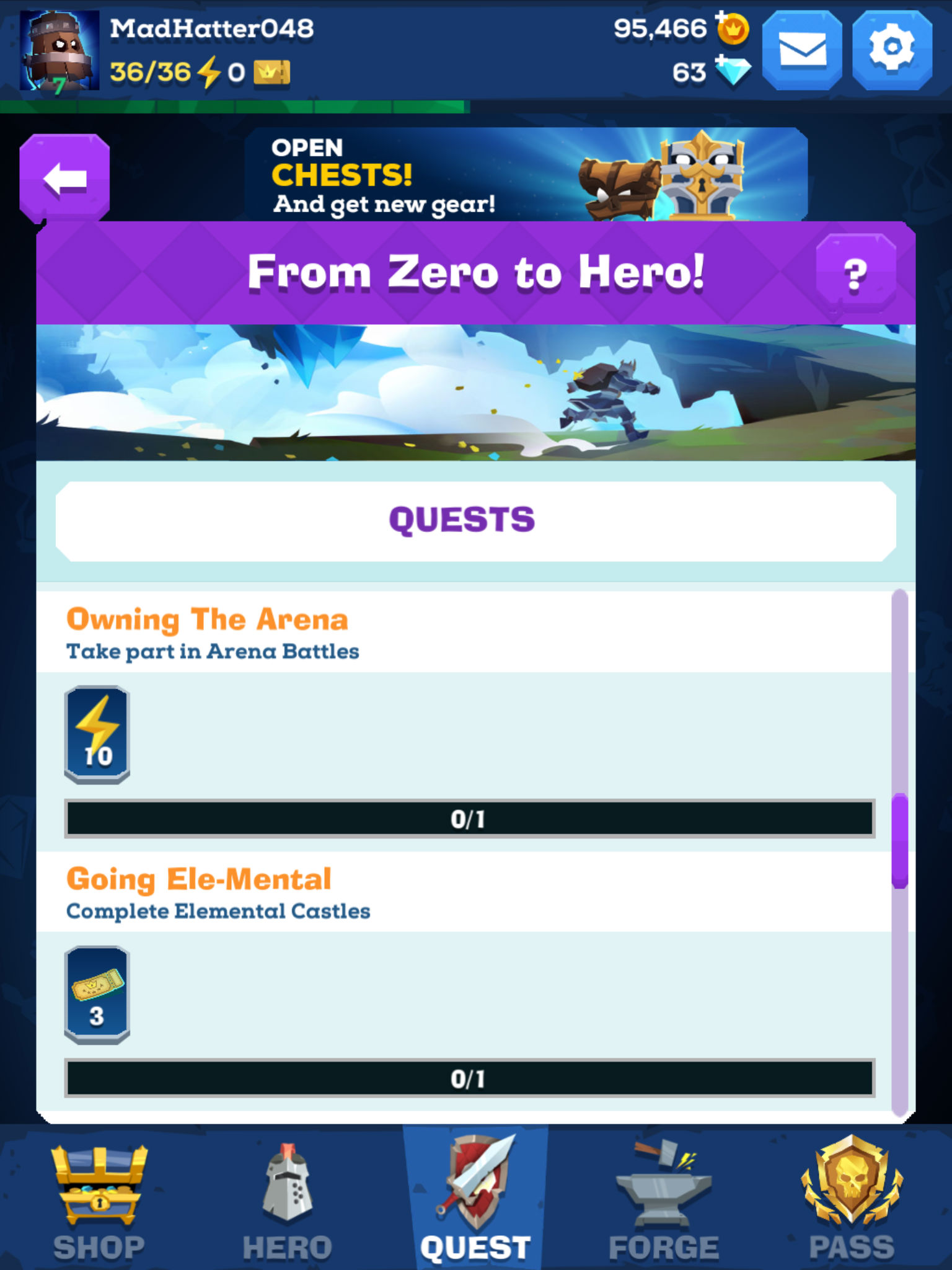 But I digress. Energy refills over time at the rate of a point every seven minutes. You can also grab some free energy by …

So What’s the Difference Between VIP and the Epic Pass?

Mighty Quest For Epic Loot goes a bit beyond many mobile games (or video games in general, for that matter) by offering not one but two different paid subscriptions. There’s both a VIP option and something called the Epic Pass. Yes, that could be confusing, but let’s clear up the differences between them to lessen that.

The VIP subscription costs $9.99 a month and does things like boost your Energy (both max Energy and faster refill rate), gives you extra daily trials, makes a special VIP Chest available, and more. You can see the entire list of benefits here: 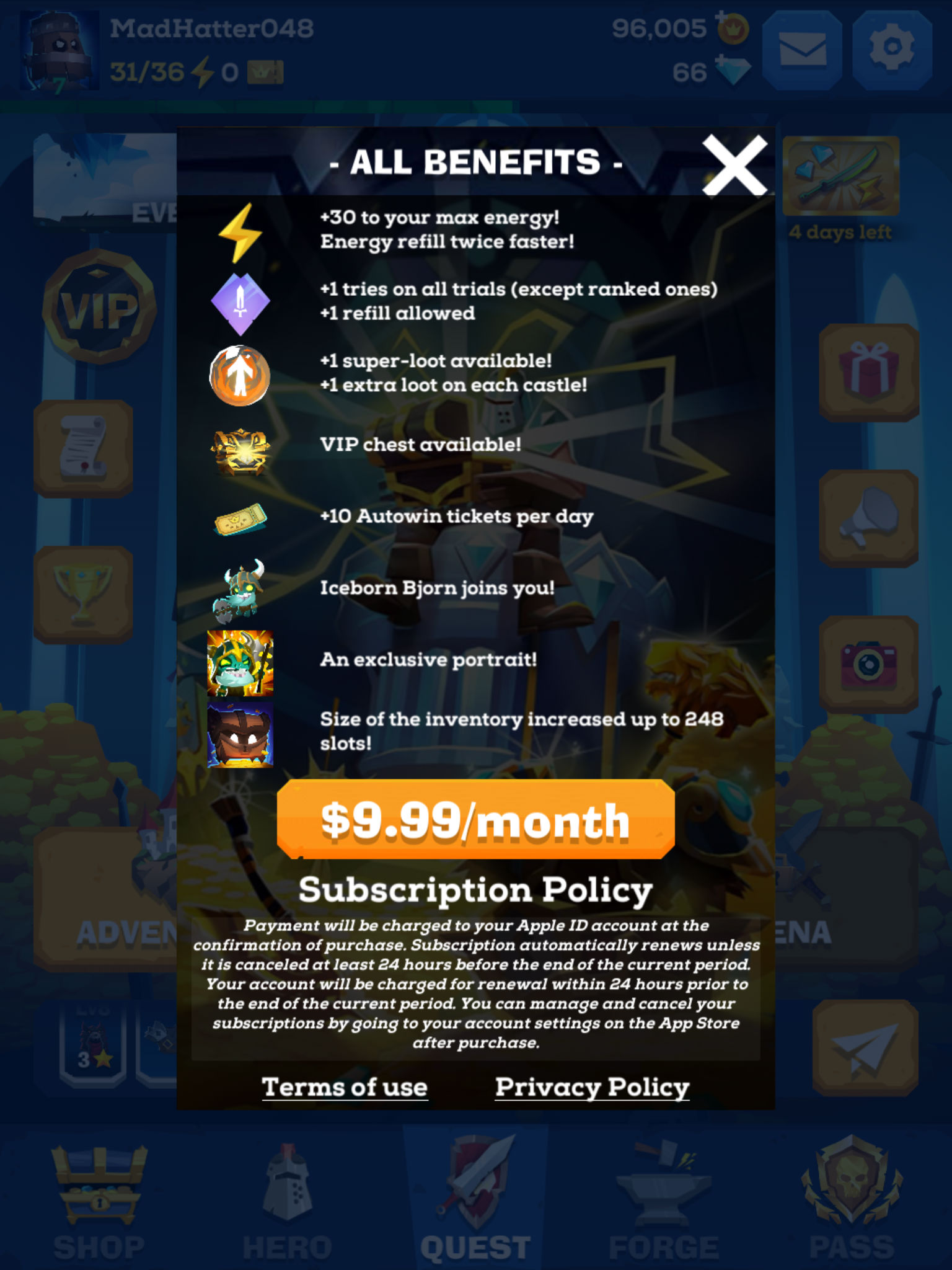 In contrast, the Epic Pass is more like the Battle Pass from Fortnite or the many imitators it’s spawned since. It offers a tiered series of rewards over the course of a “season" of a little more than two months. There are both free and paid rewards available at each tier, with the paid rewards obviously better than the free ones. Weekly missions help you make progress toward the next tier. The Epic Pass costs $8.99 per season (at least at launch), and there’s also an option to buy the pass and get 10 tiers instantly for $21.99 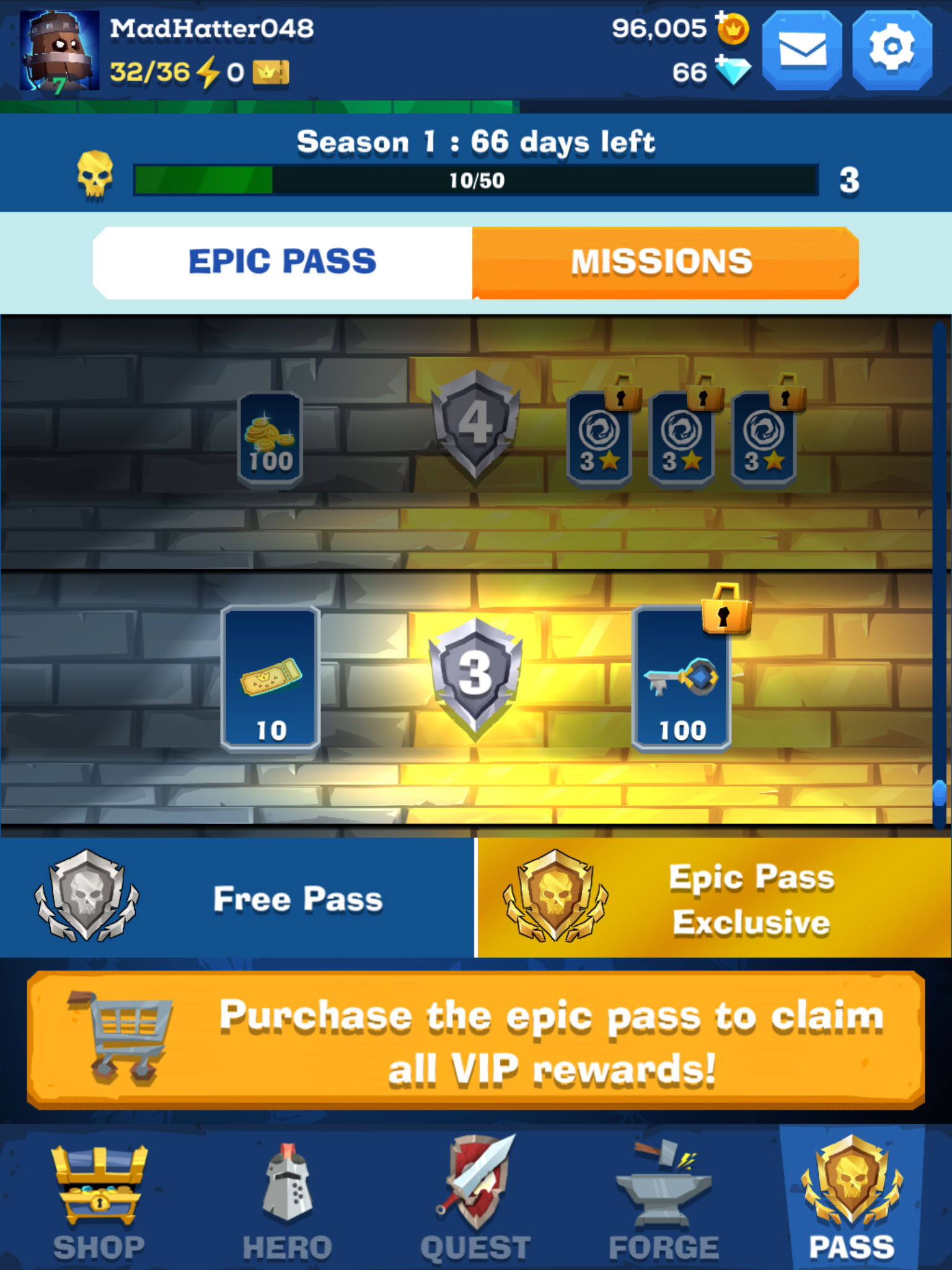 Which one is right for you really depends on what you’re looking for. VIP status provides benefits that you’ll be able to take advantage of every day while playing, but is more expensive. The Battle Pass is cheaper but only really pays off if you’re going to play often enough to get through most of the tiers in a season.

At least for the time being, there’s no option to buy either of these add-ons with Gems, so you won’t be able to grind them out for free like you occasionally can in other games. That means you’ll have to pay if you want them, so hopefully you now have a little bit better idea of whether one or the other might be worth it for you.