Total Party Kill (Free) is the latest release from developer Jussi Simpanen, aka Adventure Islands, who has delighted us for years with his puzzle-centric platforming games like Super Dangerous Dungeons, Tiny Dangerous Dungeons, Duke Dashington, and the criminally underrated Heart Star. Total Party Kill is another that’s built on a platforming foundation but is seasoned with puzzley goodness, and in this case the puzzling aspect is extremely clever. In fact it’s right there in the name: Total Party Kill. 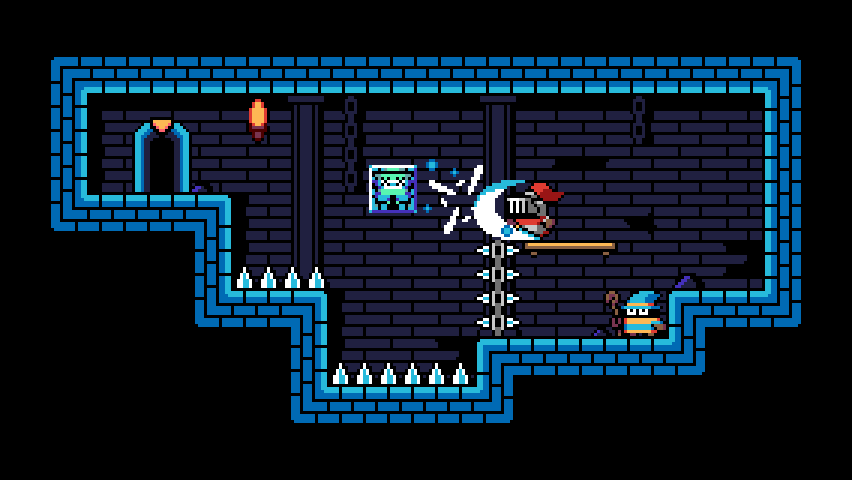 In the game you start each level with a party of three characters: A Mage, an Archer, and a Knight. To pass each level you’ll need to, well, sacrifice one or more of your own party members by utilizing each one’s unique ability. The Knight can knock another party member with his sword, thus launching him across a level and to otherwise inaccessible areas. The Mage can freeze a party member into a block of ice that can be used as a platform. The Archer can shoot arrows which move objects or pin another party member to a wall to create a usable platform.

The real enjoyment in Total Party Kill is figuring out the clever ways in which each level is designed to utilize these various skills. Often you’ll even need to combine a couple of your party members’ skills to create a combo effect that’ll get you out of a jam. For instance, you may need to freeze the Knight using the Mage, but then use the Archer to shoot arrows at the frozen Knight to move that block of ice over to a button that will open up the exit door. It’s basically a nonstop parade of levels that will make you smile once you realize the trick to solving them.

If I had one criticism of Total Party Kill, it’s that I enjoy it so much I wish there was more of it. There’s 60 levels in total, but many of them are over really quickly and so far none have really tested my skills all that much. It’s satisfying to figure out HOW to solve a level, but it’s rarely a challenge to actually execute that solution. Which is expected as this is a puzzle game first and foremost, with platforming being secondary, but I wouldn’t at all mind more levels, especially some with a more hardcore challenge. That said, what’s here in the initial release of Total Party Kill is a total blast through and through, and it’s free with ads on both iOS and Android with a one-time IAP to remove them, so there’s no reason not to check this one out for yourself right this minute.