I can’t tell you how many times I’ve played a visual novel about a man chasing after a woman, and quite frankly that theme got exhausting quickly. But a game that does the opposite, and has you chasing after a bunch of men? That doesn’t happen quite as often. Dream Daddy (Free) is a visual novel about being a dad, befriending dads, and dating dads. The game is chock full of dad jokes and bad dad puns, yet it never gets old. More importantly, it’s a lovely take on single parenthood and the benefits of community.

You, a Dream Daddy in your own right, and your teenaged daughter Amanda have moved across town to a neighborhood entirely populated by hot single dads and their children. While there, you will help guide Amanda through the end of her senior year and towards the art school of her choosing; she will struggle with high school friendships while still becoming someone the neighborhood kids can look up to. The relationship your character has with Amanda is the pulse of the story, tying everything together while showcasing how a great dad can interact with his child. She’s turned out witty and sarcastic, and seems okay even though your spouse passed away years ago. She does sometimes hide things from her parent, but what teenager doesn’t? She’s an exceptionally good kid regardless. Wow, I sound like her actual father. 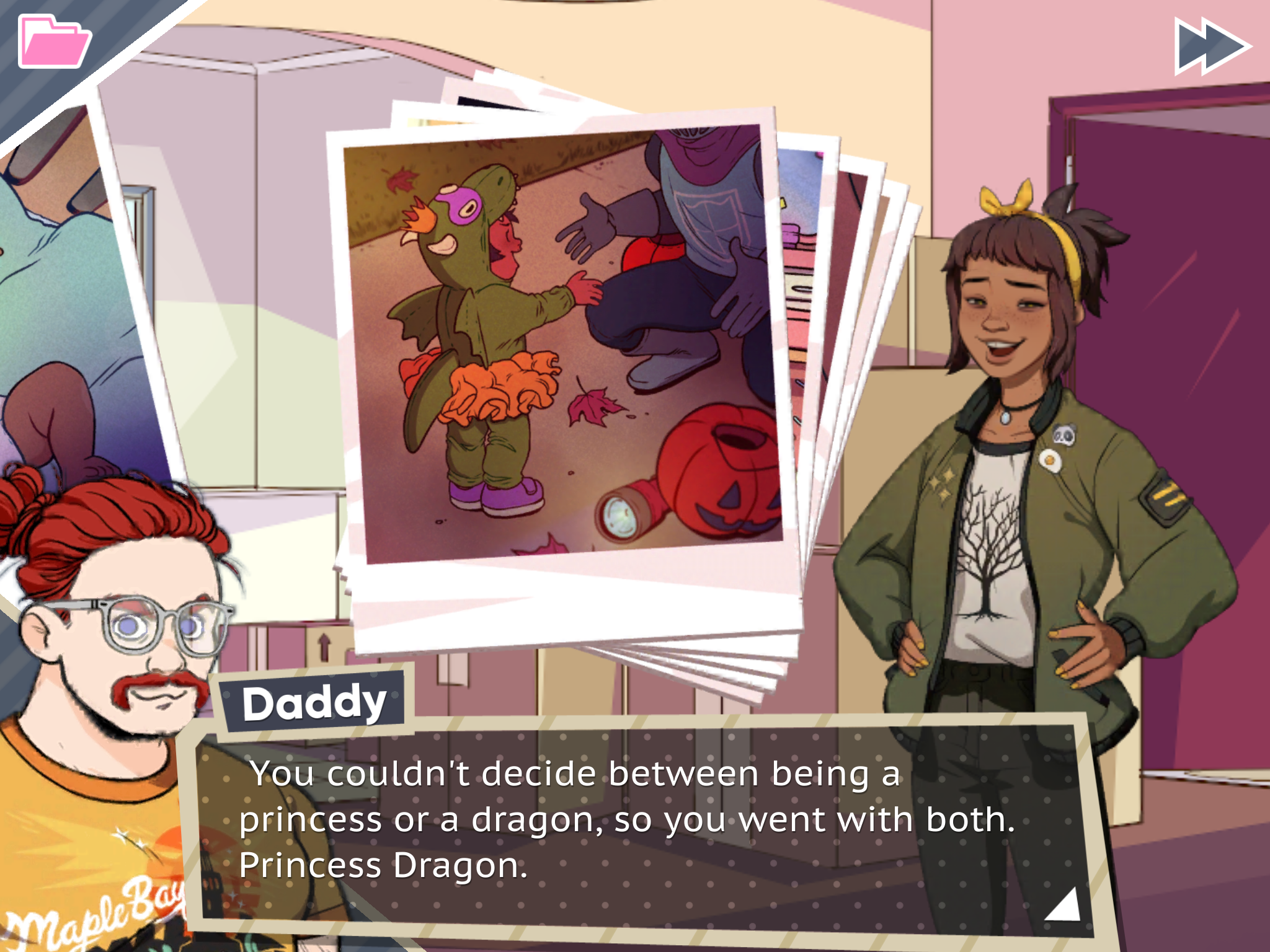 Outside of your home, there are seven dads eager to make your acquaintance. Yes, I said seven dads: there’s Craig, Mat, Brian, Robert, Damien, Hugo, and Joseph. Each dad wants to get to know you better, and has three opportunities for you to date. That means three times great dad fun! You’ll likely be drawn to one right off the bat (we all have a type), but each one has their own strengths so there’s no harm in dating around instead of just spending time with one dad.

While the dating premise of Dream Daddy may seem shallow, creating friendships with the other dads successfully explores the effects of being a single parent. Each dad is different, and raises his child/children differently, but each also has the same motive: to raise their offspring to be happy, healthy, and self-reliant. 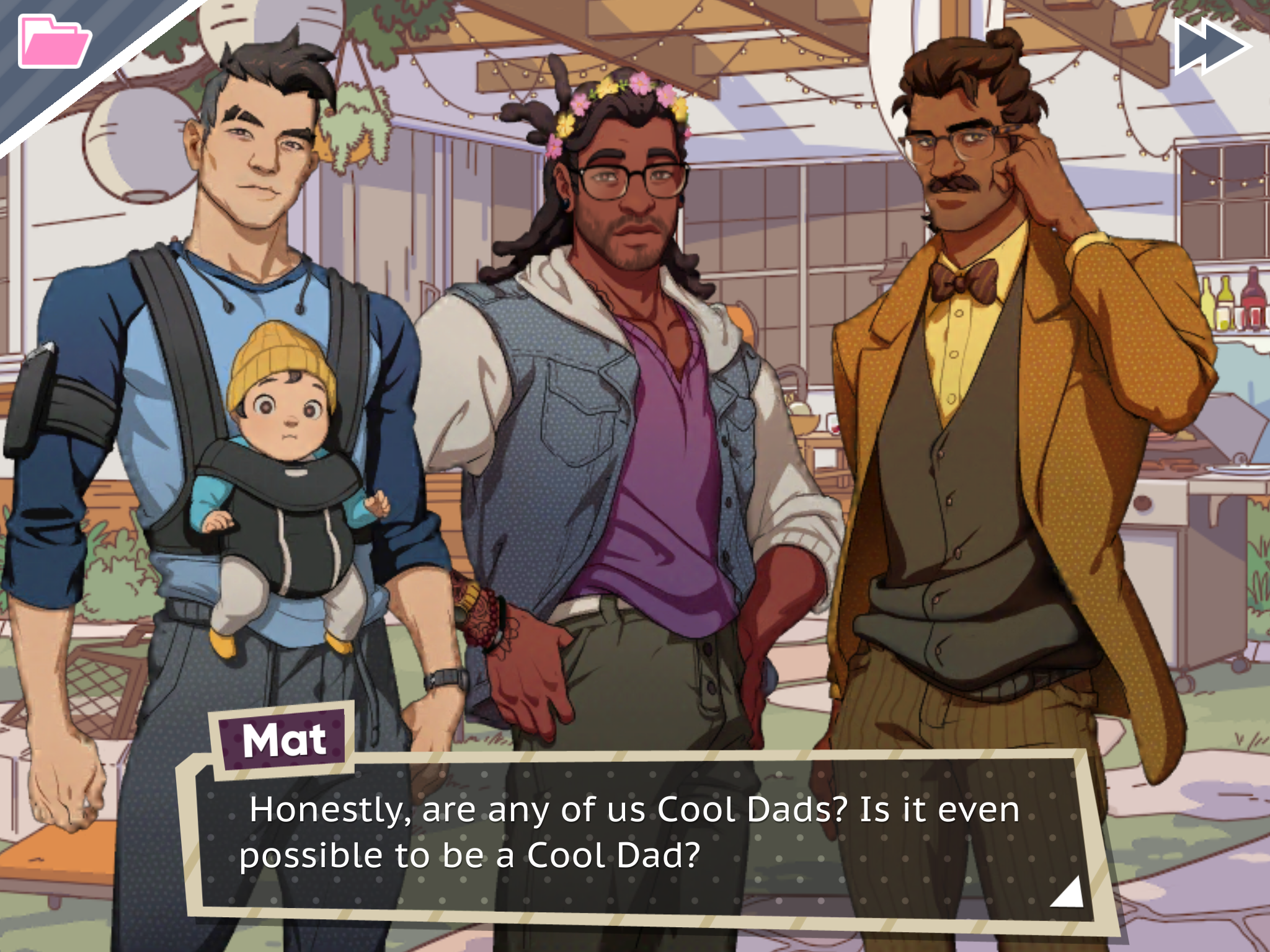 Not everyone on the block is a stranger, as your old college buddy Craig is among them. Nobody stays a stranger long, though, as each dad is very active in the community. Dream Daddy almost reads as a how-to guide to fathering. Each parent has their own style, and each clearly loves their children more than anything.

Despite the struggles of being a single parent, in the game you are clearly an active member of your daughter’s life. You took her to her first concert when she was 12 despite being wary of the pop music that was featured. My dad did that exact thing, taking me to a Backstreet Boys concert when I was 12; it remains a very special memory, even 21 years later as I prepare to see them once again. Dad won’t be escorting me this time, no surprise there! 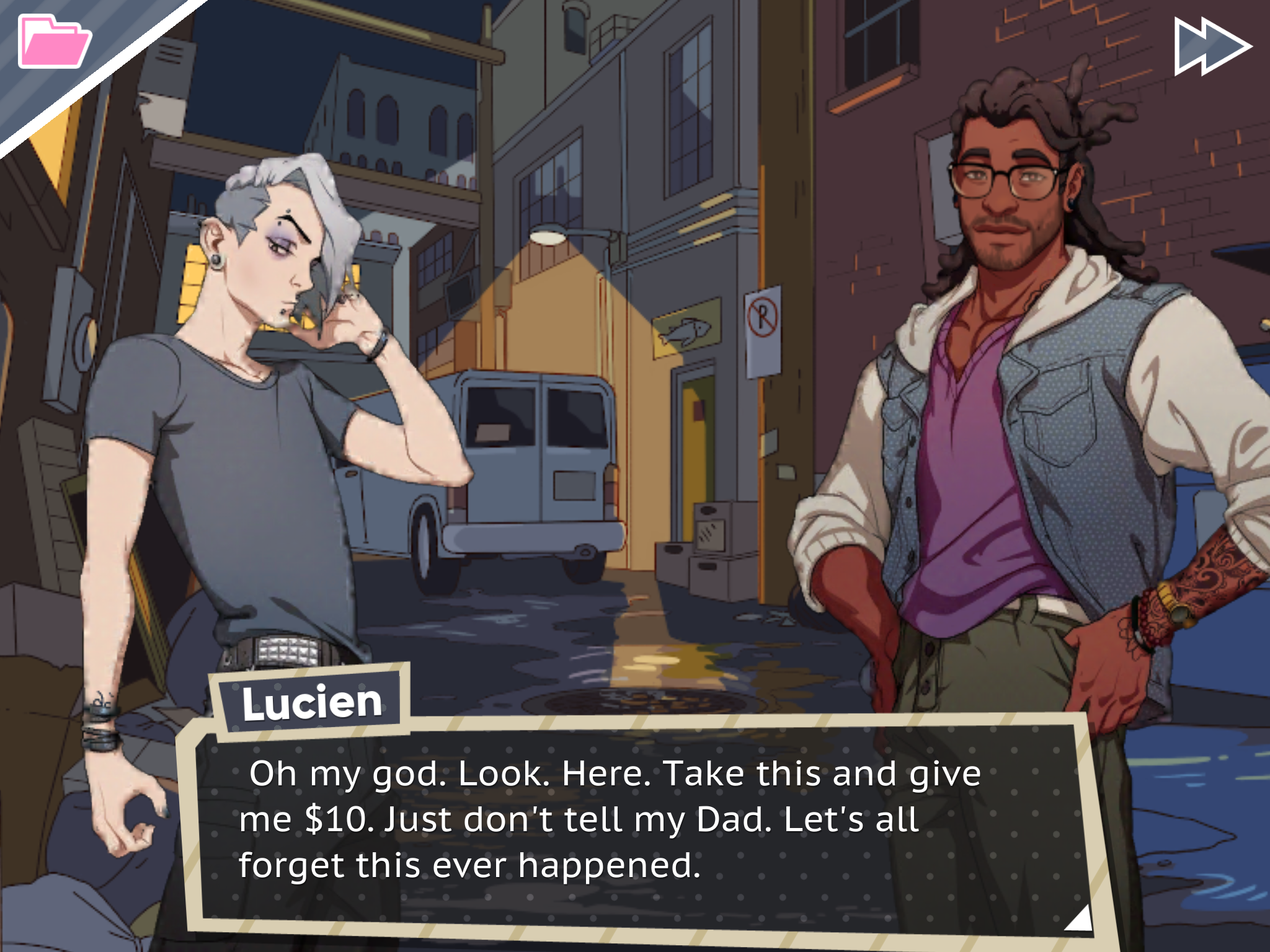 There are many times I found myself belly-laughing, like when you’re on a date and seeking weed. Just one weed. I nearly died; your character is just so hopelessly clueless in such a dad way. And they must love mashing reality shows together to create new ones. True Life: I’m a House Hunter is just one of many referenced in Dream Daddy. Most importantly, there is an entire scene devoted to butt jokes, and that’s when I knew I was in love with the game. It doesn’t take itself too seriously, and is often in it for the laughs along with the sentimentalism.

Dream Daddy has an interesting price structure. The game is free to download, but dating dads (the bulk of the game) is behind a paywall. I’m not questioning this in the least; the game is a premium experience and deserves a premium price tag. The odd thing is that you can either purchase three messages for $4.99, allowing you three dates, or you can pay $14.99 to unlock the entire game. You can technically get to the end of the story with only three dates, but where’s the fun in that? Variety is the spice of life. 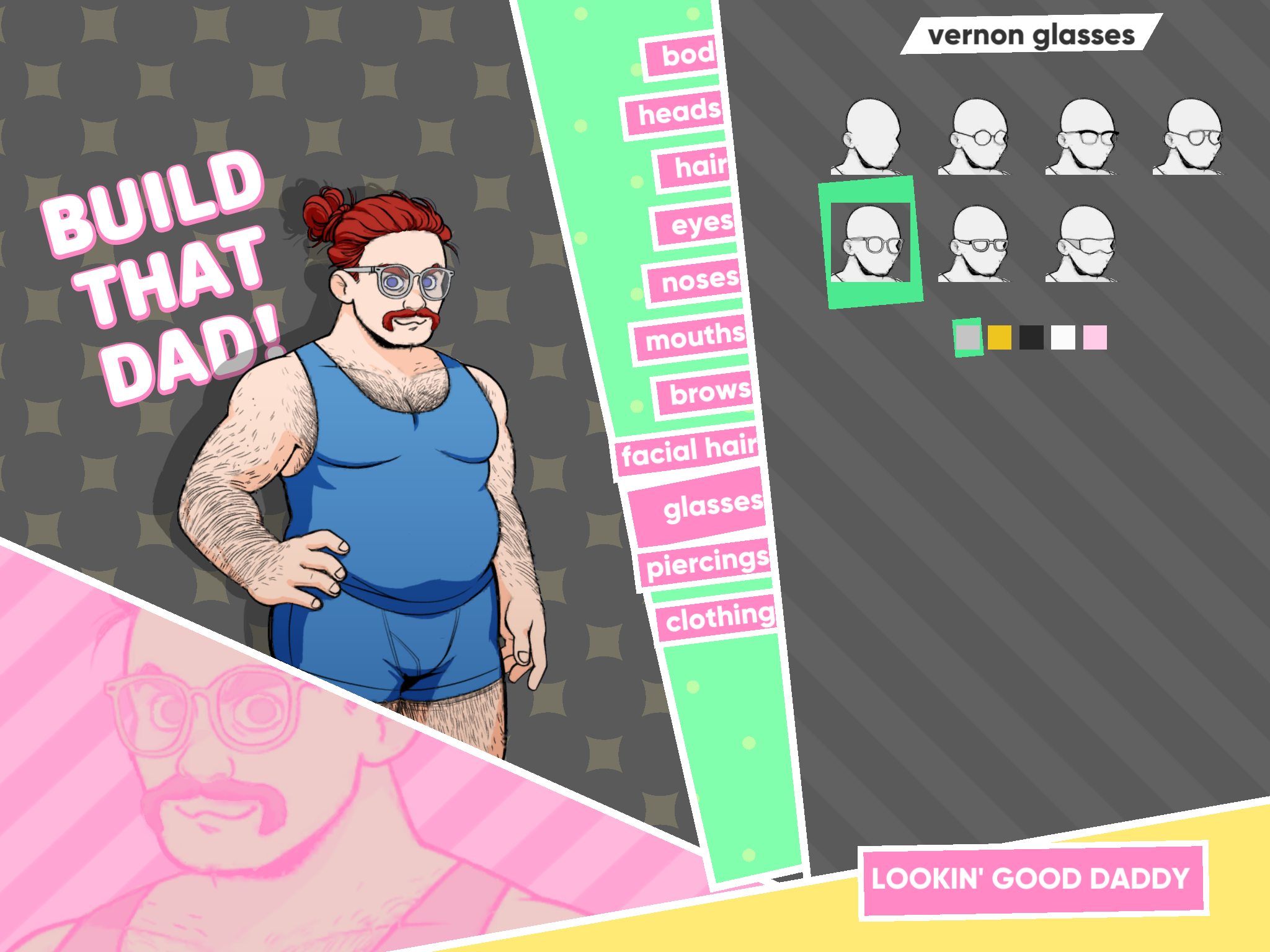 The game begins by having you create a dad. The dad creator offers a surprising amount of options, from body type and head shape to clothing. Want to create a red-headed dad with the infamous “dad bod" and 80s classes? You can! Want to create a skinny goth dad with blue lipstick and sweatpants? Go for it! Your dad represents you, the player, in the story and you’ll see him often.

As a visual novel, Dream Daddy plays kind of like a choose-your-own-adventure book. You read the story and it advances, and every so often you decide which path to take. The nice thing about Dream Daddy is that you can explore multiple paths, by dating many dads simultaneously.

After initially meeting all the dads, you join Dadbook to keep in touch. Dadbook contains complete profiles on all the cul-de-sac’s dads, and from here you can choose who to spend time with. Each date is given a score, based on the options you choose and how you fared in any mini-game that appears. You can also replay dates to get a better score.

Speaking of mini-games, each one is entirely self-contained and features a new type and style. For example, there’s one when you’re trying to advance through a crowded dance floor; in another, you’re put into a GameBoy-styled RPG where you need to take turn-based actions. 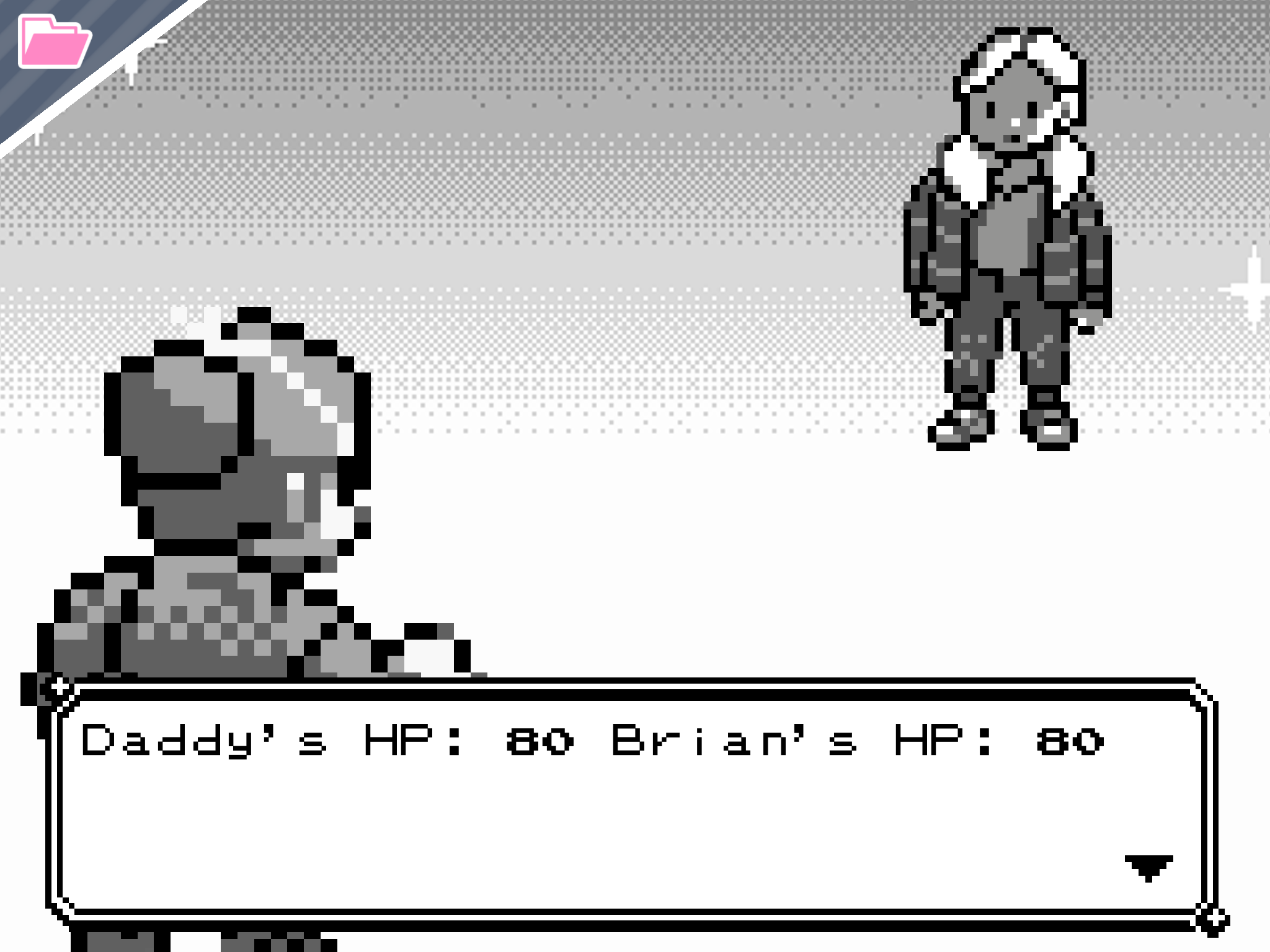 There are countless visual novels devoted to dating a bunch of very busty women, but few that turn that trope onto its head; Dream Daddy does that through objectifying men. Not in a mean way, or even an overly-sexual way – instead, Dream Daddy makes virtual dating wholesome and punny. It shows the importance of community and friendship, especially for a single parent. It’s not so much about the dating as it is exploring new interests through new people. I’m so appreciative of the experience.