Released last month, one-finger flinger Ordia ($3.99) seems to have flown entirely under the radar. Until, that is, it received an Apple Design Award last week. So, prompted by Apple’s choice, and despite a general disinterest in flingers, I decided that if it can make it to the Design Award stage, I can probably spare a few days and give it a shot. Besides, it does have some great art.

Now, three days later, I’ve jumped all the jumps, collected all the collectables, and dodged all the hazards. Yet I am left with a question: What is it that is so elegant, so exquisitely tuned that it captured Apple’s attention? Was it, perhaps, the delightful feedback when pulling back to jump, or the tactile bump on first launch? Or maybe the smooth gameplay, seamless animations, and forgiving difficulty? Perhaps it was a mixture of it all, or something else entirely—who can say? Regardless, there is something to be said for a short game with nearly flawless components.

Ordia is a visually impressive game. Using three distinct colour palettes it crafts a delectably minimalist experience across three detailed “worlds”, each with its own atmosphere and style. Even on the scale of a single level, an effort has been made to liven up the background, and it shows. There’s always a bush, a waterfall, or some other touch that adds a certain flair to levels that would otherwise be lacking. The overall effect is wonderful, and it’s hard to find anything that deserves criticism, save (and I’m really stretching here) maybe walls in worlds one and two could use a little more… style. As it stands, they are little more than bland mono-colour boundary lines. 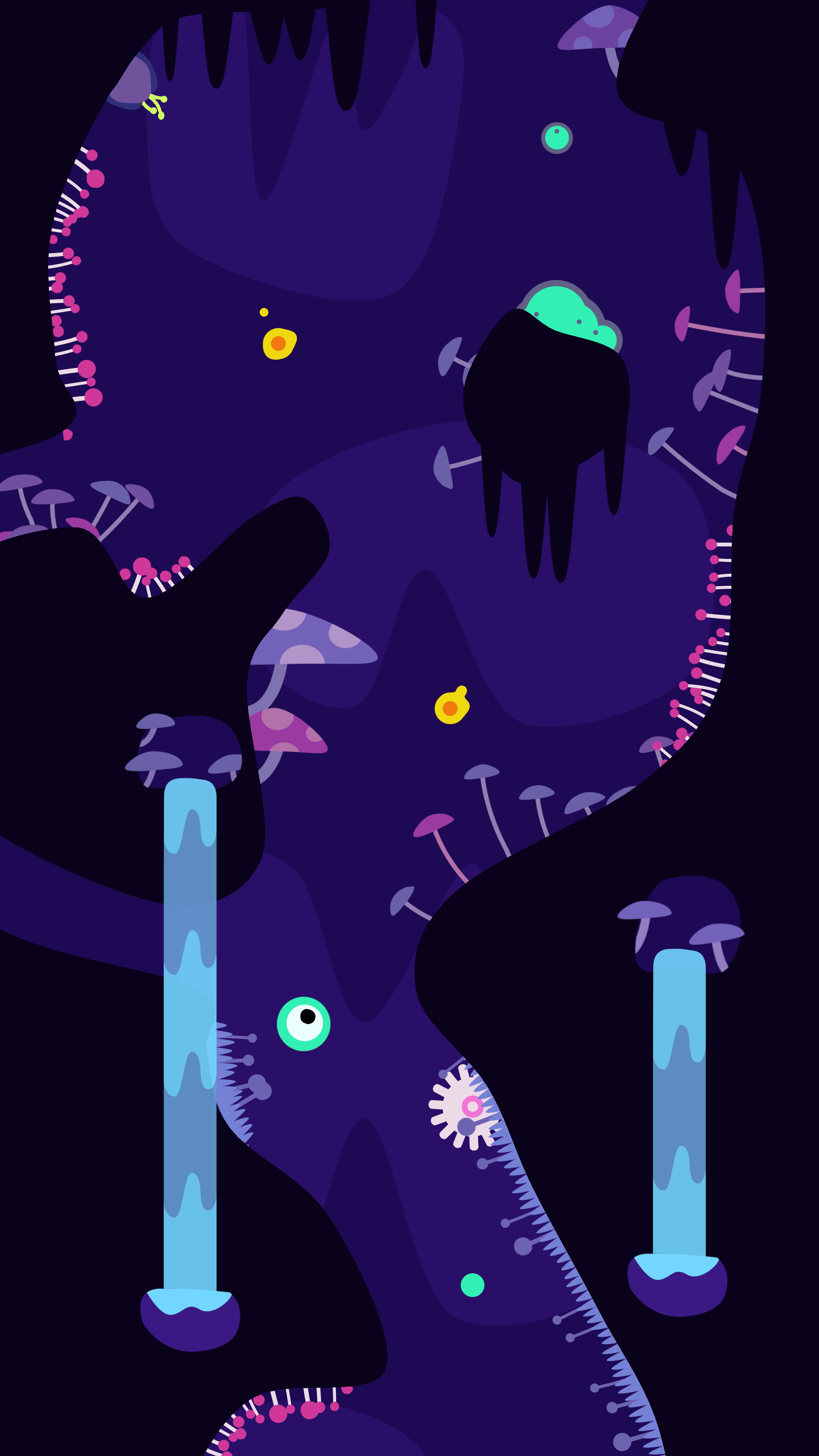 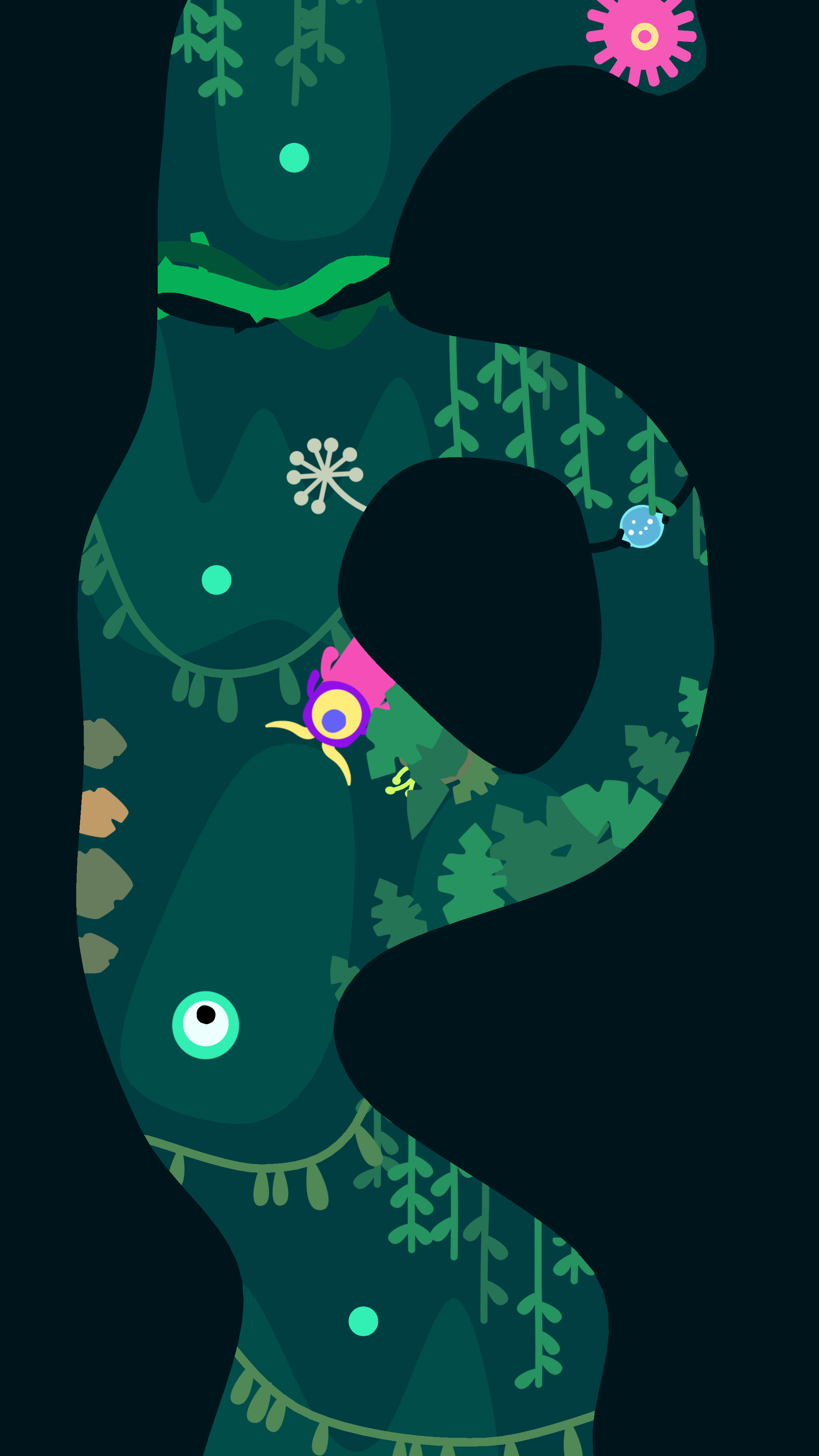 More than just a pretty decoration, though, colour is used to differentiate between hazard, hang point, and other useful or interesting objects. Take, for instance, the colour teal. The blob of primordial goop we fling is teal, and hang points are teal. That’s it. Whenever this colour is used, it means that surface or point is safe and can be stuck to, or on, and jumped from. Pink, on the other hand, always denotes a hazard––touch it and you’ll collapse into composite materials like the loosely grouped ooze you are. Yellow, though, is a bit of a rule breaker. Rather than a single use, it covers just about everything teal and pink don’t: Springboards, tasty morsels, and floating jump points. Whenever yellow is used, you know it’s different.

Despite what the rather tame art style would imply, Ordia isn’t precisely a relaxing game. Don’t get me wrong, the moment to moment pace is prettylaid back, and outside of time trials there’s no pressing need to rush to the end. There’s plenty of time to line up the shot, breathe, and double check before leaping from one brief point of security to the certain safety of another point, between which dwells an angry group of angry pink plants. Until, rather suddenly, it is no longer quite as easy as it once was, and you’re left desperately aiming, leaping, and trying oh so very hard to avoid the spikes on the walls, the red blob chasing you, the terribly hungry worms in the walls, or some other dastardly hazard. They are all found in the most inconvenient of places, and they all want nothing more than to ruin your day––and they’re quite good at it, too.

Fortunately, all those complications are introduced slowly, and it is not much trouble at all to adjust and keep pace. Right from the start, however, is something of an extra bonus for the entrepreneurial and completionist spirits: Each level contains ten yellow, absolutely delicious morsels for our dear leaping slime. They can be found behind false walls, by bouncing off yellow seed-like plants, or, sometimes, in plain view. Getting them usually requires some fancy fingerwork, or waiting just a little longer than comfortable before flying away to safety. A few, though need no more than a carefully aimed leap. Really, it just depends on the level and, to some extent, the world.

Despite the picture I’ve painted so far, though, not all of Ordia is perfect. While it is certainly hard to find flaws, they are there––the most notable of which is the level design. Every game has a certain amount of level design, and it could be argued that it is the single most important part of the experience. Unfortunately, it seems that some parts, some hazard sequences, are used multiple times between levels. Nothing so blatant as recycling whole levels, of course, but… nevertheless, it is noticeable. Perhaps it was done to keep the overall difficulty curve smooth, or to extend an otherwise too short level. Or, maybe, it was simply an oversight. It’s impossible to say for sure, though, and any theories as to why is nothing more than speculation. Besides which, it is a small complaint, and a small blemish on an otherwise spectacular game.

Additionally, and while I wouldn’t consider it to be a flaw per se, Ordia is a rather short game, clocking in at a mere 39 levels in all (including the bonus time trials). That’s, say, about three days worth of game, or less if you really want to push it. Bumping that up a bit, though, are two additional modes for each of the thirty base levels: Time trial, and hard mode. In time trial, players are given a time to beat and must complete the level. Quite often the given time is very generous, and fifteen, twenty, even thirty or more seconds can be trimmed off. Hard mode, however, is a different beast. It removes all checkpoints, and hazards are more difficult. What does that mean practically speaking? Well, if you die you have to start over. While I haven’t noticed a difference with the basic pink spikes, the rotating buzzsaw creatures are faster and worms are more aggressive. In short, all hazards are faster, or give you less time to traverse them in some other fashion.

All in all, Ordia is a hell of a game. It’s absolutely gorgeous, the animations are buttery smooth, and the sound effects and haptic feedback are incredibly satisfying. So satisfying, in fact, that if you aren’t actively paying attention, you don’t even notice them. It sounds counterintuitive, but you don’t want your sound effects to shout too loudly or they’ll become distracting. Apple was right––it’s a great game, and well worth the time invested. Everyone, but particularly one-handed gamers, fans of finger-flinging fun, connoisseurs of minimalism, or folks looking for a solid offline portrait game, should give it a shot. Unless an inflatable pink hazard or pushy choral chimes are involved, you can’t go wrong.