If there’s one thing that most people would agree on, especially if said people are mobile gamers, it’s that we don’t need more zombie survival games. There are as many varieties as there are takes on the undead, so coming up with something unique is hard. Good thing Infectonator 3: Apocalypse ($4.99) is almost the complete opposite, as your goal is to make sure zombies overrun the entire world. And while playing as the zombies has also been done before, Infectonator 3 presents it as a blend of strategy, action and humor that I’ve never seen tried in quite this way, which gets it an ‘A’ for effort right off the bat.

The basics aren’t hard to grasp thanks to the tutorial. Every level starts with the goal of killing as many humans as possible before you run out of zombies, which is easier than you might think because every member of your undead horde is only around for a limited time before they fall apart — the kind of logic that a ton of victims would have liked to have seen in horror movies. You start the downfall of each region by tapping and infecting one poor soul with the zombie virus, after which he or she does the expected thing and goes around trying to eat the brains of others. Part of the fun early on is watching the behavior and dialogue of the humans, as they seem to know they’re in danger but don’t exactly grasp the severity of the situation. Each level ends when either all the humans or zombies are dead. Er, dead again, I guess, in the case of the latter.

Infectonator 3 isn’t content to let you sit back and admire your handiwork, which might be how it got classified as an Action game in the App Store. While your original zombie goes to town, you have the chance to add to the chaos by dropping in more zombies, though the supply is limited. You can also tap on doors to open or close them, ensuring people are either available to be eaten or trapped and made to suffer a horrifying fate, depending on the circumstances. If things are looking particularly grim and mankind proves too hardy, you can even resort to items like grenades to kill them directly, which isn’t too elegant but gets the job done in a pinch.

Your skill at using all the zombie-spreading tools gets increasingly tested the further you go, because even though we humans can be pretty dense sometimes, we’ll eventually figure out when something like a full-on zombie apocalypse is going down. The game tracks your effectiveness in terms of both local and global panic levels, so if you dilly dally too long in destroying certain areas of civilization, the panic level will mean police and even the military catching on to what you’re doing. In terms of the long game, you’ll start to realize when you might be up against it when you start a level and the plain old defenseless civilians are outnumbered by gun-toting protectors, which ratchets up the difficulty immensely if you don’t carefully plan where on the globe you’re attacking and win more often than you lose. The nations of the world will also start searching for a cure to the zombie virus, much more effectively than in, say, The Walking Dead. Throw in the tricky but humorous boss battles and there’s plenty to tax both your reflexes and your wits. 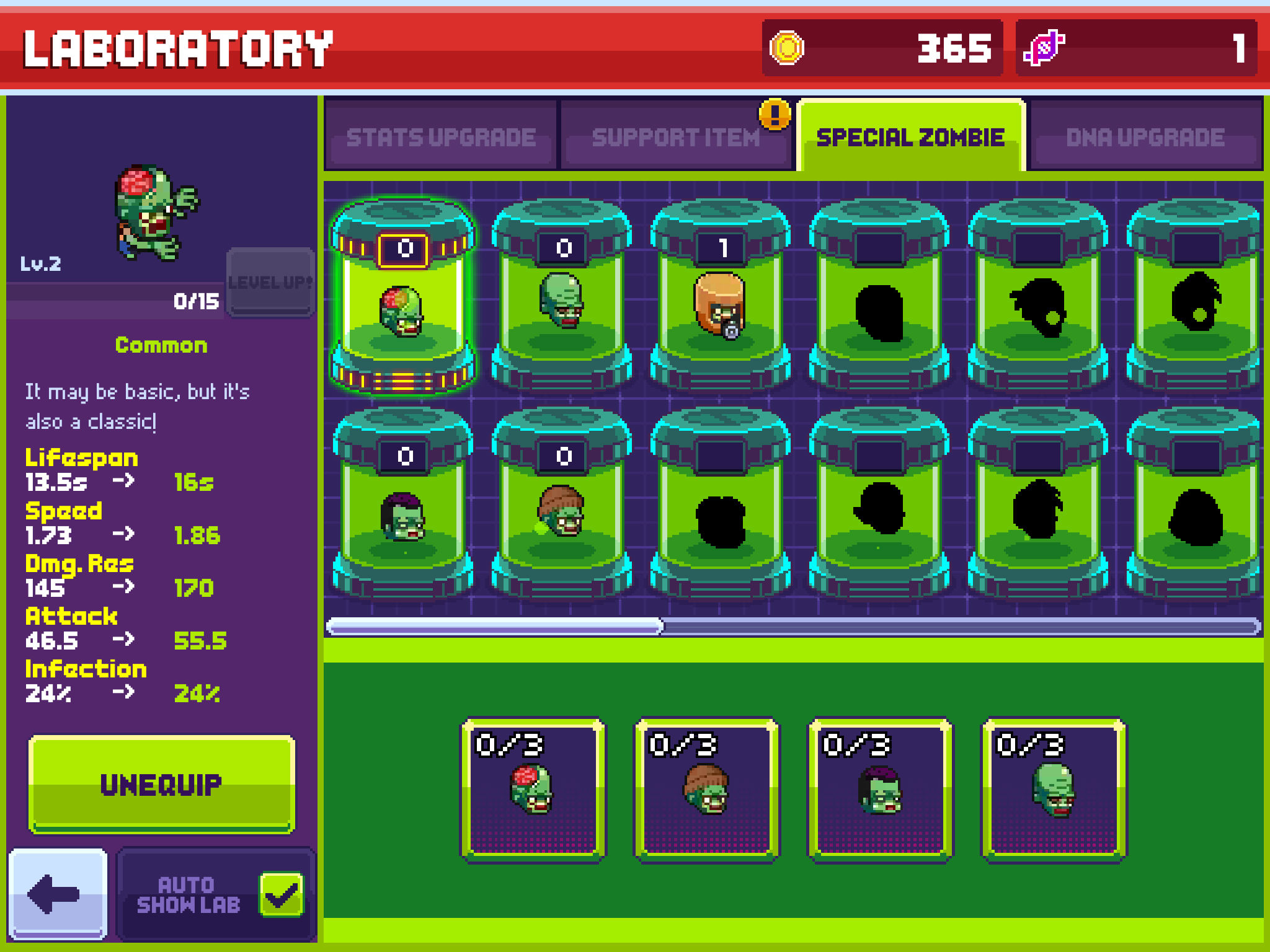 So what’s a lord of the undead to do to make sure you keep up with the still living Joneses? Hit the lab, of course, to cook up special zombies with all kinds of nifty properties. Once unlocked, special zombies can be crafted from lesser walkers, which in turn can be leveled up in stats like speed (’cause you really need those World War Z-style sprinters on your side), lifespan, damage resistance, infection chance, and more. By carefully spending your coins on improvements and support items and researching more special zombie formulas by combining DNA fragments you acquire, you just might have a fighting chance to overrun the entire globe. 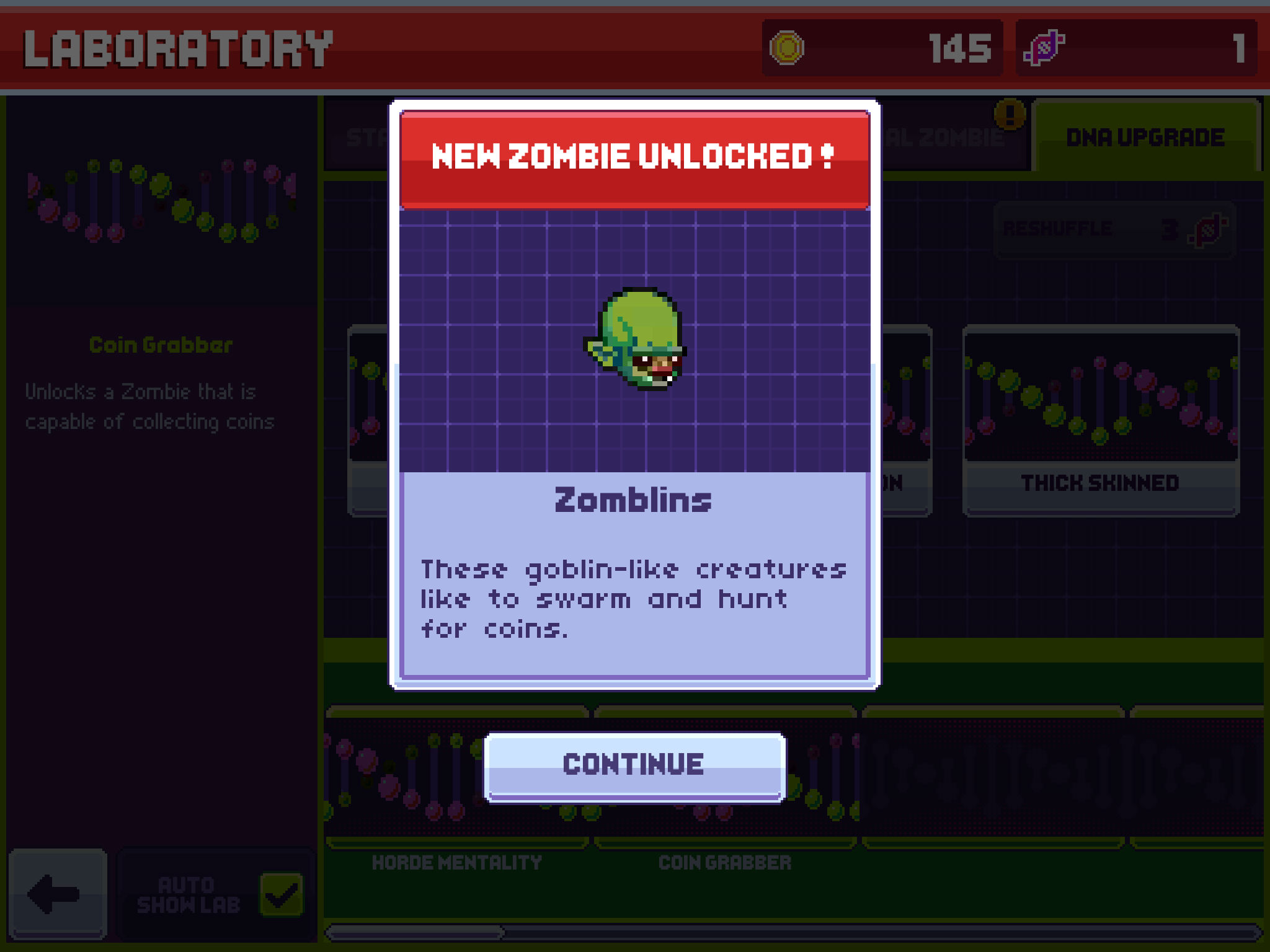 While the challenge involved is serious, the tone is anything but. The combination of Infectonator 3‘s mildly pixelated, intentionally retro visuals and a nonstop barrage of puns and jokes puts the game’s tongue firmly in its cheek, even set against the backdrop of the potential end of all that exists. There are several special zombies who are on the nose (but no less funny for it) parodies of other monsters from pop culture, send-ups of politicians and musicians, and basically is played for laughs that can be. Even the newscasters who pop up in-between levels are unintentionally in on the fun, and you’d have to be pretty self-serious not to smile at least a few times while playing.

The only real obstacle to my enjoyment of every minute I spent trying to destroy the world was some touch-related issues in both the map and game screens. There were occasional times where I found it difficult to select a certain nation or region, especially some that were geographically smaller. Selecting the wrong one means you have to tap the back arrow to go out and pick again, leading to some momentary frustrations. During levels, there were also moments when I swore I’d tapped to place something and it didn’t happen, and would have to select a zombie or item again to drop it in. There’s also an instinctive feeling that you want to be able to drag the map around, which only led to me sliding the app out of the active window altogether. None of these things came close to ruining my overall love for the experience, but when you see the score fall half a star short of perfect, that’s why.

Then again, almost perfect ain’t that shabby. There’s a very good chance you’re not looking for another zombie game for your phone or tablet, now or perhaps ever. But Infectonator 3: Apocalypse is good enough for you to cast aside your many preconceived notions and give it a shot, because trying to end humanity is actually a lot more fun than you might think.