The tower defense genre has a long and storied history on the App Store, featuring well known titles and obscure gems alike. Standing out amongst the latter is Dungeon Warfare, a wonderfully difficult yet seemingly overlooked take on the traditional lane-based formula. Despite releasing two years ago, it still holds up for an occasional bout of strategy and adventurer-murdering with its diversity of traps, traps, and flair.

Dungeon Warfare 2 ($4.99), first released on Steam in 2018 and now available on mobile, offers much of the same things that make its predecessor interesting—a multitude of unique and challenging levels, many with multiple objectives that often cannot be completed in a single attempt; dozens of traps, each useful for different strategies; and a ridiculous amount of replayability. As a tower defense title, it excels in delivering a variety of strategies and approaches to each level despite using a rather plain approach to delivering enemies. More than just a tower defense, however, it also delivers a certain something—something that, if I’m not mistaken, is entirely reminiscent of the old Dungeon Keeper: It feels like a dungeon.

Each level is different, requiring thought and preparation in order to succeed. Where one might have environmental hazards (chasms, rivers, or lava flows) and an optimal strategy may include traps which forcibly move enemies, another may be nothing but walls, or even entirely open. Not only in design are they unique either, as there are a number of tilesets for visual flair—although there is much less diversity here than in the design itself. Nevertheless, switching between jungles, caves, mines, deserts, and volcanic wastelands offers just enough eye candy to please my attention-starved monkey of a brain.

Of course, art and level design are all well and good but the real appeal is the gameplay, the strategy, and the challenge, right? Those are the meat, bread, butter, and potatoes of the matter, and they are all there. Unlike a Kingdom Rush game where tower placements are pre-defined, Dungeon Warfare 2 leaves most of that to the player’s ingenuity, instead preferring to, for most levels, define one or more paths for enemies to travel. To the sides are walls, which can hold a single wall-type trap (think darts, chakrams, flame throwers, and swinging axes). The floor, as well as the walls, can hold traps—they’re just floor-type traps instead (think spikes, meat grinders, gravity wells, slime pits, and spinning pillars of death). A mixture of both is required, as there is only a limited amount of space for either in the critical choke points.

While it is technically a floor trap, it is worth dedicating a paragraph to the barricade. This mighty hero-blocking trap is unique in that it is the only semi-permanent structure which can be constructed which can change the preferred travel path. Adventurers will always follow the path of least resistance, even if that means taking the long route through the passageway full of meat grinders, angry demons, and swinging axes. Block that off too, though, and they’ll immediately return to the shortest path and break through any barricades which first diverted them. 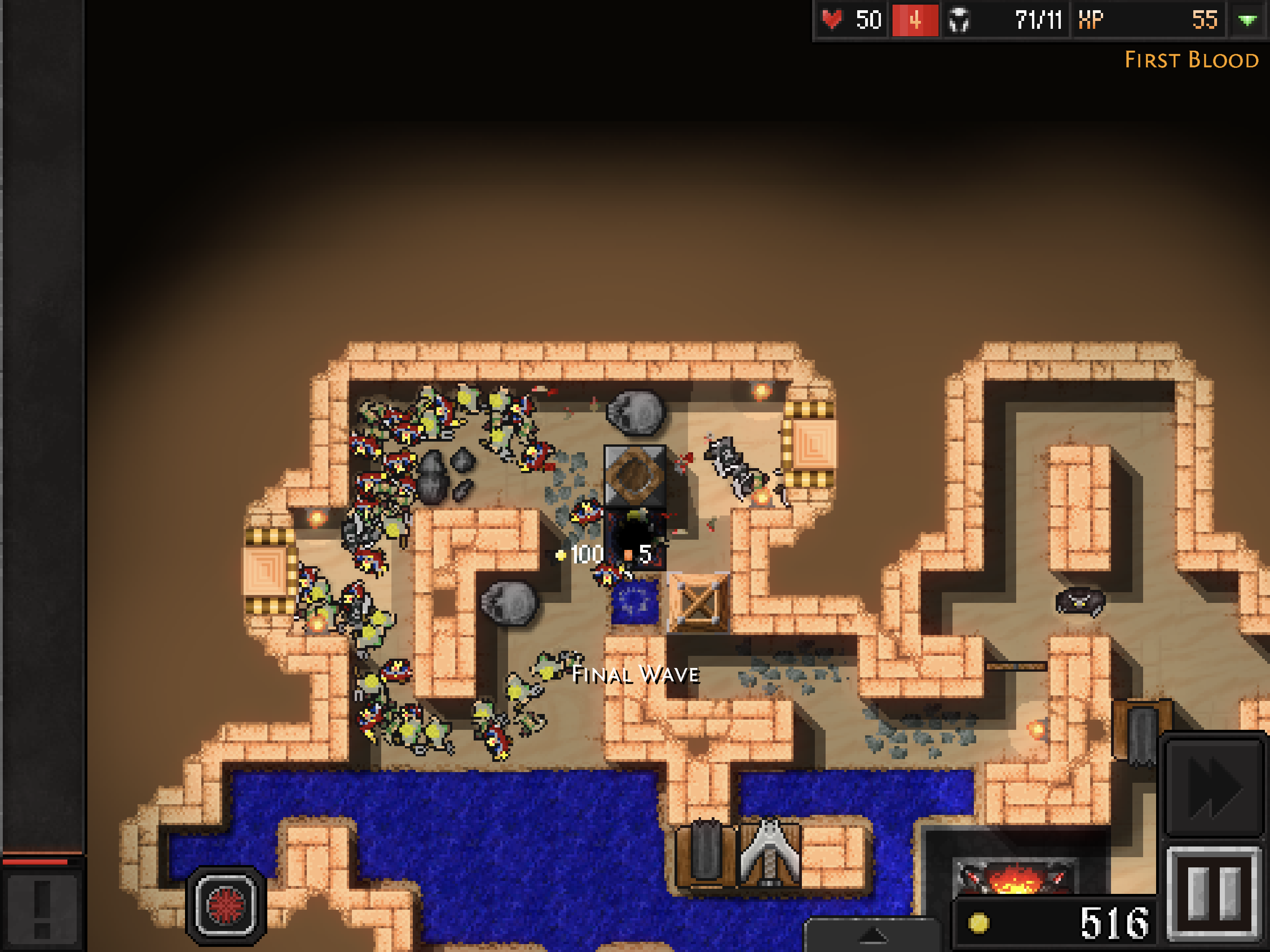 The diverse tilesets, multitude of traps, and crazy number of levels are only a part of Dungeon Warfare 2’s draw, though. Properly rounding out this smorgasbord are skill trees and upgrade tiers which, as far as I’m aware, outright cannot be fully completed. That is to say, there simply are not enough skill points and upgrade points available to fully max every tower and every skill available. Fortunately, both can be reset at the push of a button, requiring no currency or experience penalty. This is something I have taken advantage of several times to complete a particularly difficult level, or simply to better use the points available to me.

While the trap masteries are fairly boring, offering only stat increases, perhaps a cost reduction, and unlocking upgrades at levels five, ten, and fifteen, the three skill trees are anything but. Each tree is strong, but emphasises different playstyles and situations. The Brute tree incentivises rushing every wave and amassing a horde of traps by reducing the penalty to build multiples of the same type, and strengthening them when they are placed together. The Elite tree specialises in optimising a few select traps, emphasising a focus on kill zones and making the most of limited numbers. The Greed tree focuses on amassing vast sums of gold and experience, providing more and stronger benefits with increasing amounts of gold. Each tree is useful and has broad applications, but will excel if applied in its preferred niche. 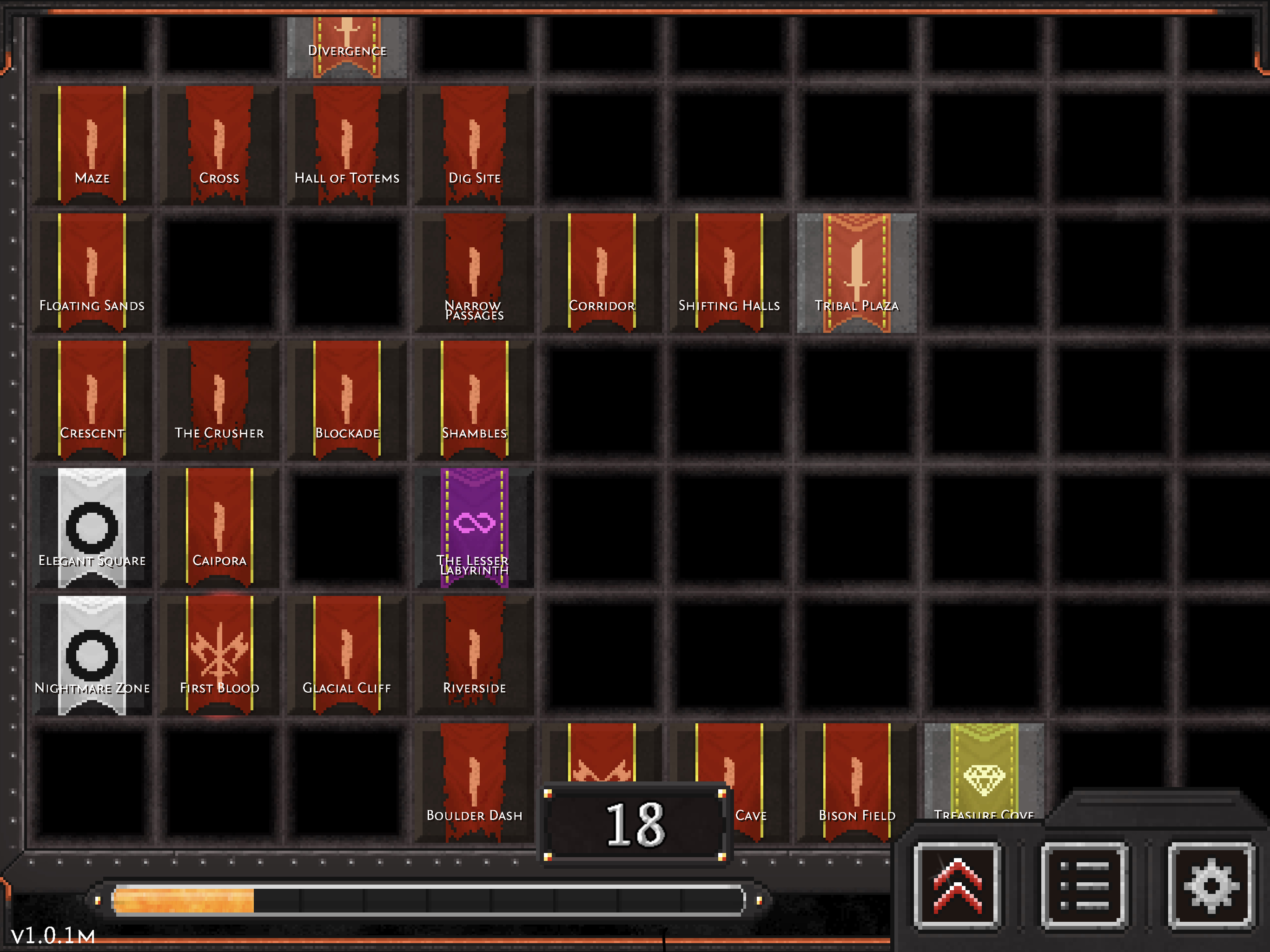 Dungeon Warfare 2 isn’t all sunshine and rainbows (or, as this is a dungeon, bubbling tar pits and screaming heroes), though. It does have flaws—notably, it can be a little too much of a tower defense. If that sounds unlikely, I would ask you to take a moment and reflect on Field Runners, the old Gem Keeper, or even a Bloons TD. What is it that makes them so appealing? For the most part, it isn’t that they’re a gritty, hardcore tower defense. It’s their quirkiness. They have a charm to them, and it sets them apart from games like Dungeon Warfare 2 which rely on a strategy and a cunning design above all else. While that is certainly an appealing niche, it also removes it from broader appeal. To be entirely fair, Dungeon Warfare 2 does have a certain resemblance to Dungeon Keeper and can tap on that nostalgia to some degree, that doesn’t make up for a story (as in Kingdom Rush), wit and humour (as in Field Runners), or just plain weirdness (Any Bloons TD out there).

For a more strategy-focused, traditional tower defense, Dungeon Warfare 2 hits it out of the park. It is hard, it is unique, it has great level design, and it has a ton of replayability. For players interested in scratching the itch left by Kingdom Rush: Vengeance, those looking for a more premium experience, or those who recall with fondness lane-based tower defenses, this is a steal. For folks who aren’t interested in planning and thinking out the best way to approach a level, or who find the whole dungeon aesthetic to be a turn off, maybe look elsewhere. Regardless, I have thoroughly enjoyed returning to levels I once found incredibly difficult, buffing them up with experience modifiers, and securing a flawless victory with a new strategy. Hopefully, you will too.