Dragalia Lost‘s new “The Hunt for Harmony" event is here to ring in the warmer climes of Spring. Just like Accursed Archives that came before, we’re looking at the latest Facility event, and this Hunt for Harmony guide should help you clear the varying difficulties of the Vernal Games and the 5-wave run of the challenging Full-Bloom Festivities.

Despite looking all cute, colorful and cheerful, we’re still going to be bashing around bosses throughout this event – and it’s one you’re going to want to focus on if High Brunhilda is still in your sights.

Even without that specific goal in mind, you’ll want to grind paper-mache to upgrade your Dragonata and bolster your Water-attuned adventurers for whatever lies ahead. 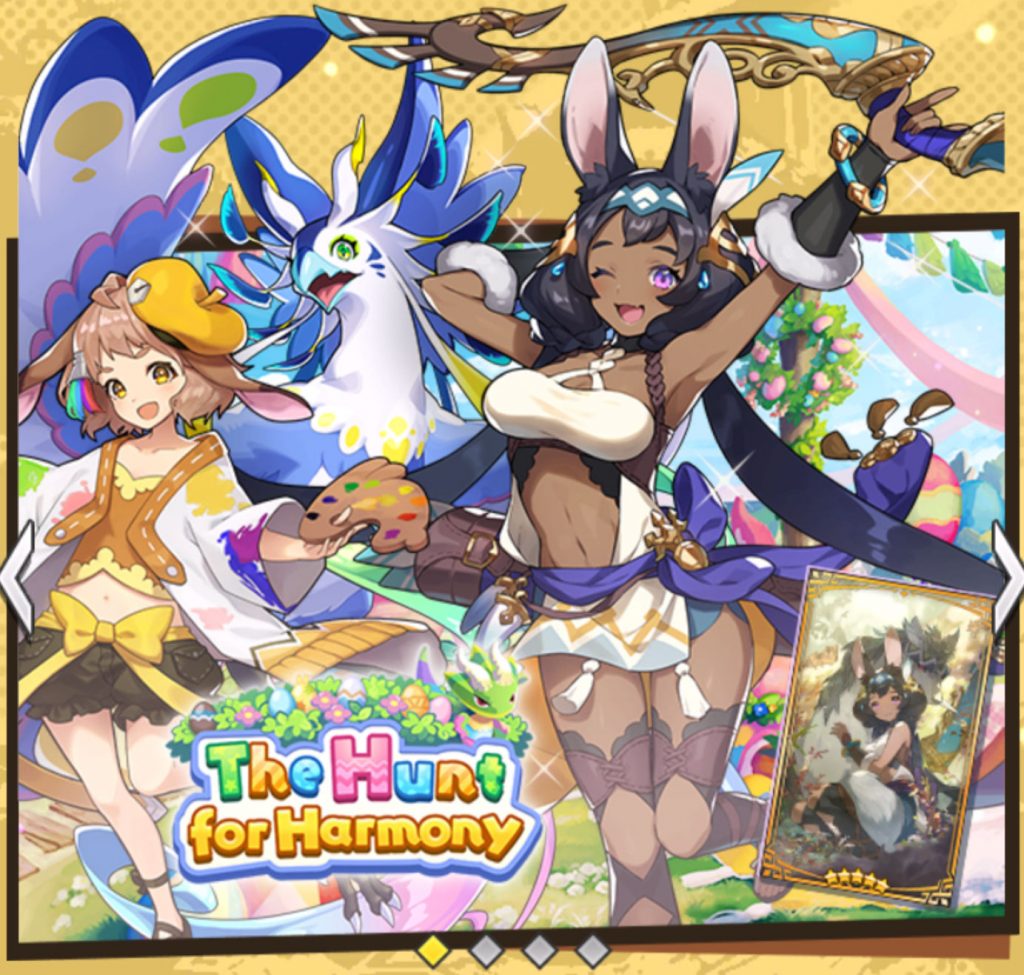 Unlike the other elements in Dragalia Lost, Water-attuned adventurers are oddly split between roles and tiers. If you have characters like Lily, Xander, and Xianfried, you’re pretty much good to go on the offensive side of things. Dragonyule Cleo is another obvious pick, but newer players won’t have had the privilege of her just yet.

If you’re without a 5* Water adventurer, Orsem is a decent option, with characters like Elisanne, Karina, Thaniel, and Luther useful for filling in any gaps. Fortunately, the event banner includes very capable newcomers like the bow user Laranoa, dagger girl Fleur, and the colorful dragon Simurgh.

The main problem here is that most viable Water adventurers fit the Attack or Defense role, so unless you have a well-equipped Thaniel or even the 3* Ricardt, you might be better off bringing an off-color healer like Hildegarde or Heinwald. Lowen would most likely get burned alive thanks to his Wind attunement. You wouldn’t want to roast a little kid, would you?

Newcomer Simurgh can really pack a punch with her +40% Overdrive Punisher, but by offering only HP boosts, she’s more about boosting the damage of Healer or Defense units more than adding more muscle to your attackers.

As for dragons, Leviathan has a proven track record thanks to High Brunhilda and the recent Flame Golem Void battle, but Vodyanoy will bolster any attackers with its high Strength gains, whereas Poseidon’s split HP/Strength boons can help out with healers or other squishy characters. Poli’ahu can aid with her Freeze effects. Just try to stay away from base Mercury and 3* dragons. 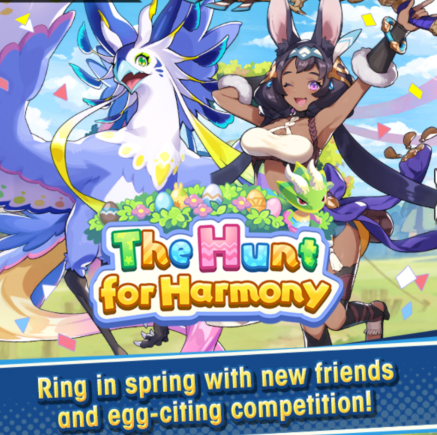 With Spring now in full bloom, Luca and Sarisse have whisked our protagonist off to the yearly Sylvan celebratory banquet. And while most forest folks welcome the human after his heroic deeds at Luca’s village, the Sylvan elders aren’t quite so quick to give up the tradition of a Sylvan-only event.

Hoping to use the wish promised by the yearly painted egg hunt to force the Sylvan elders to open up to new cultures, our heroes head out into the forest – but they’re not the only ones on the hunt.

Mistaking them for powerful dragon eggs, fiends begin stealing competitor’s hauls. Deeper into the forest, we find the Water dragon Simurgh raging at the loss of her own. Calmed by one of Luca’s contraptions, our heroes turn their attention to retrieving the true dragon egg, all the while collecting paper-mache to create a traditional Sylvan Wishing Doll in the shape of a dragon in the hopes of welcoming another into their fold.

With the help of our heroes, the little painter Fleur is crowned the victor and wishes to leave the forest to work on her art. But with the closing of one event comes the start of another – The Vernal Games, which pits our warriors against a series of powerful beasts.

The Warm-up stages of the Vernal Games mission acts a little like a teaser of what’s to come. You’ll face off against the same boss even in the real thing, but this one is far weaker by comparison and is gated behind a single small adventure map before reaching its lair. Extra difficulty settings require a higher facility level, so make sure you’re always upgrading.

Like many other bosses, this one isn’t alone. Weaker teams will want to focus down the additional enemies to avoid death by combos, but high might teams can easily overpower the entire map with some AOEs and wide force strikes. Plenty of enemy attacks stun in these fights, so proper resistances will make the job far less likely to be lost to RNG.

As for the boss itself, it’s big enough to cleave wide areas with a single swing, and will use that momentum to pivot on the spot. It will usually start with this attack if you get close, but can opt for a wide dash that you’ll want to avoid. Then there’s its ranged boulder toss indicated with a purple marker. Steer clear of the dropzone, and you shouldn’t have much trouble. Just break it and go in for the kill; but be sure to beat up any additional enemies that spawn during the fight, as Menaces can still pop up to drop some rare loot.

Every now and then, a clear of the Expert difficulty Warm-Up will unlock the “Finals”. The main difference here is that you won’t have to push through the adventure map, and will instead be thrust right into the boss encounter.

Other than the far more generous paper-mache drops and slightly higher Might requirement, this isn’t much more difficult, so the strategy remains more or less the same.

Clear this each and every time it appears to drastically reduce the time and stamina you spend farming paper-mache for your facility.

As the main attraction of this Water facility event, Full-Bloom Festivities: Expert swaps out the single battle for a series of waves, culminating with the very same boss from before.

Wiping or timing out will still count as a “Clear”, deducting stamina and dishing out rewards based on your final wave. But with rewards ranging from powerful 4 and 5-star weapons to even summon tickets, this is where you should focus your efforts for the duration of the event.

Optimization is key here. Waves follow a scripted pattern, so knowing where to meet your enemy can make for a much easier battle.

Note: Consider investing 1-3 wyrmrite to speed up your facility upgrades after level 8 or so to save some time. You’ll be getting plenty of the stuff throughout the event, anyway. Not only will the facility boost your clear rates with massive damage increases, but a maxed out facility is basically mandatory for what comes after. It’s a great shortcut to your next Halidom upgrade, too.

Enemies spawn in a + position on the map with healing goblins featuring on the far ends. You’ll breeze though this.

Enemies spawn in slight curved lines across the east and west of the battlefield. Stay in the center to bait the melee attackers and quickly dispatch them with a full-circle skill. Then just take out the healers around the edges.

Enemies spawn in a diamond formation around the map with bulls on each point and wolves on the diagonals. With good enough timing, you can catch them all as they all charge and jump into the centre.

A more scattered wave spawn, you’ll want to take down the shrooms before they have a chance to stun you, as rats and wolves will attempt to finish off any sitting ducks. Like most other waves, just try to bait them all into one spot for a quick kill.

The boss appears in the center of the arena with four dogs ready to jump in. He’ll do a wipe swing just before the jump in, so transforming into a dragon right as the wave starts will usually avoid the hit and kill the lunging wolves. He’ll slip into Overdrive quickly and charge around the battlefield, so having copies of A Mother’s Love wyrmprint can lead to an even quicker Break.

Bulls enter the fray when the boss reaches around half HP, so using your second dragon charge or abilities here will usually knock them out as they charge toward you. Pair them with the boss for an easier time.

Stronger teams will be able to take the boss down by this point, but any kind of delay will see it spawn two Flame Golems almost identical in style their Void Battle counterparts. The hulking beasts will aim to interupt you with similar attacks to the boss. Focus these down if the boss is going strong. Otherwise, just end its life.

A challenge not for the faint of heart, this is the epitome of the event and isn’t at all required to gain all of the rewards. Like in Expert, this is a gauntlet run of 5 waves, and wiping or timing out will cost you stamina, with the rewards not really being worth it unless you can consistently reach the penultimate wave. Prime team composition, helpers, and a maxed out facility is all but mandatory.

This isn’t a task I doubt I’ll manage to best myself before the event ends, so I can’t offer much sound advice. What I can suggest is carefully memorizing each enemy spawn zone and devising a plan to take down its more problematic monsters before the have a chance to ruin the run.

The key to these types of fights is to optimize your wave clear time, as you’ll need plenty of it to defeat the boss at the end. Axe users are usually favorable here as a force strike can bring them in and stun survivors for a time, so build your team accordingly.

We won’t be able to update this guide with any sound strategies as time goes on, but the Dragalia Lost community makes a habit of showing off speed-runs or heavily documenting viable solutions as an event goes on, so keep your eyes peeled.

Like most events, the Hunt for Harmony is a fantastic way to earn a bunch of upgrade materials like mana, rupies, wyrmprint water, and those all-important Damascus Crystals. It’s in everyone’s best interests to completely wipe out the reward box in any event, and this is one certainly no different.

Rewards are handled the same way as in the last event. Completing quests and boss battles earns not only the “Eggsploration Points” needed to advance the point reward list – which earns you rewards at set milestones – but also the Woodland Herbs used in the event-specific Treasure Trade for items of your choosing.

The amount of Eggsploration Points you earn through battles can be increased by hitting certain goals (like limiting damage taken, and transforming), and can even be multiplied by equipping and upgrading the event-specific wyrmprint “A Mother’s Love”.

Not only will you want to use early Woodland Herbs to acquire and upgrade multiple copies of this wyrmprint to accelerate your reward rates and facility upgrade materials, but its Gauge Accelerator perk will be almost certainly be needed to best the event’s higher difficultly boss runs, as it decreases the time required to inflict Break.

For an efficient event, stock up on A Mother’s Love wyrmprints early on, then pick up mana, champion’s testaments, and crystals to boost your team strength and speed up the rest of the event. Be sure to grab rare items like Damascus Crystals, Steel Bricks, and Twinkling Sand before the event ends. Even if you can’t make use of them right now, you’ll kick yourself when you do. These things are usually locked behind monthly Void Battle rewards.