Strategy games have been a long time interest of mine—from Warcraft III to the more recent League of Legends or Clash Royale, I’ve been playing them for quite a while. I’ve never actually played a Tactical RPG, however, so I was intrigued when I first heard about a small developer looking for testers for an upcoming game. Turns out that game was Shieldwall Chronicles: Swords of the North($9.99), and it’s actually pretty neat.

Between the thirty-plus hour campaign (an interesting campaign no less), challenging levels at five different difficulties, and more than enough characters to drink a tavern out of business, Shieldwall Chronicles is a very, very replayable game. More than that, it’s a fun game—once I figured out its quirks and made the necessary changes, there wasn’t a minute of unenjoyed strategy.

The immediate draw, of course, is the story. You, the player, lead a mercenary band hired to guard a caravan as it travels into the northern realms. Along the way, the party is drawn into a conflict which threatens to destabilise the established order—and maybe make a pretty penny along the way. While there is nothing revolutionary to be found here, that is alright. It is an enjoyable experience, and the characters are well written. In addition, branching story paths provide additional gameplay beyond the initial play through. If more games offered this in a well-done package consistently, I would be a happy man indeed.

Getting the basics down is pretty easy. The game offers a helpful tutorial which introduces the important mechanics. Actually playing the game, though, can be a little more complicated. For a start, the size of the character roster alone can be a little intimidating: Fifteen different classes, each with a male and female variant, each with their own skills, backstory, and use case—nevermind the subtle mechanics which aren’t covered in the tutorial. Shieldwall is designed to last well beyond the campaign itself. It’s meant to provide the thirty-plus hours of the campaign, plus a good twenty in party composition for the truly hardcore. 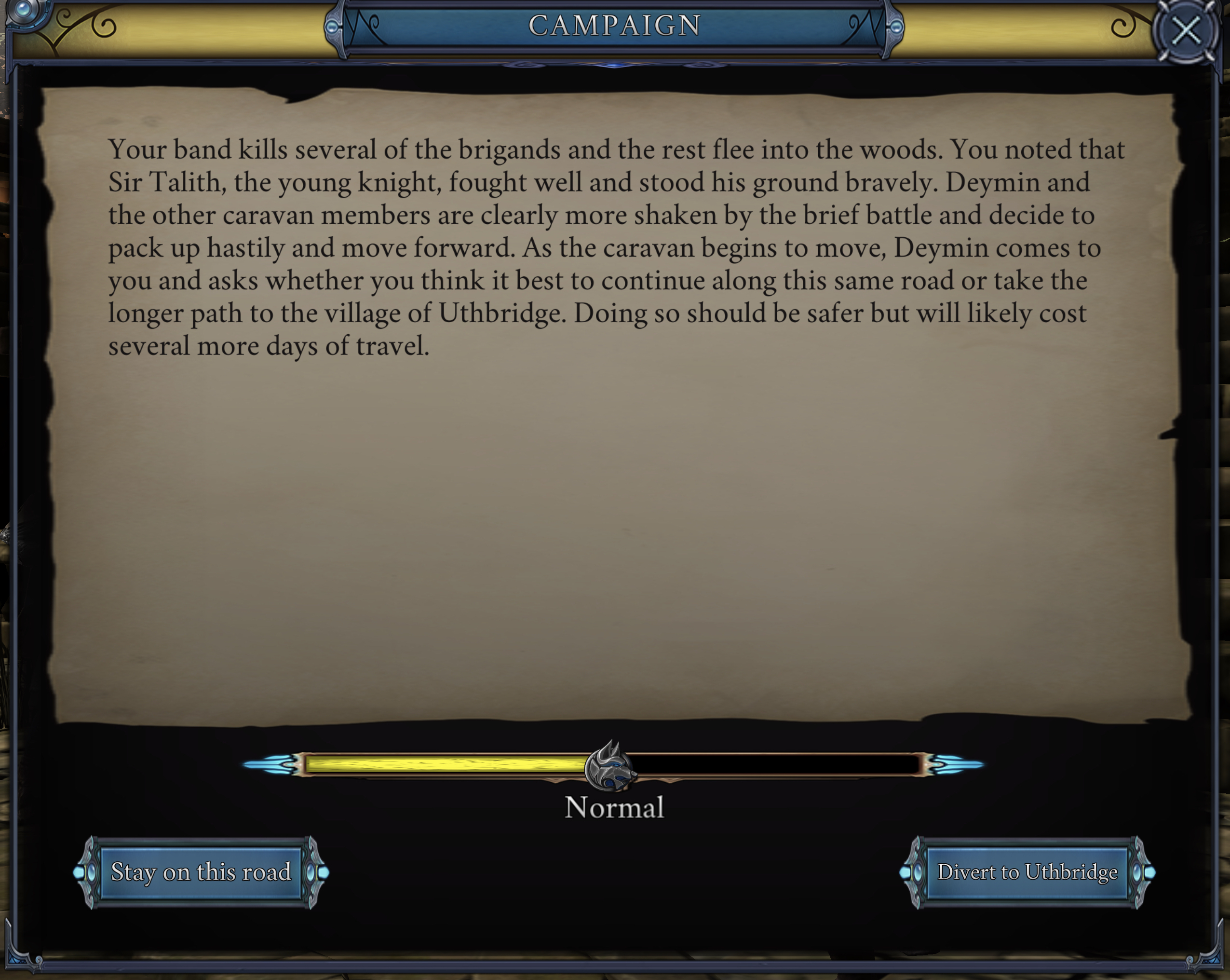 All this leads to the actual meat of what we all care about: Gameplay. Does the game play well, and is it fun? The answer to both is a confident yes. The turn-by-turn action is, depending on the difficulty, either incredibly easy or crazy difficult—requiring a fair amount of thought and planning each turn—at the player’s discretion. Of the two combat systems, complex or simple mode, I had initially intended to play in complex mode on hard. Unfortunately, hard proved far too difficult for the tactical noob that I am, so I quickly dropped it down to normal. This didn’t solve the problem, however; complex mode itself was the problem. Put simply, actions in complex mode, whether they were skills, movement, or attacks, were prohibitively expensive—especially for slow characters, like the dwarf or tree spirit.

Fortunately, switching to simple mode provided a simpler, but more enjoyable (and definitely better balanced), experience. Instead of a single pool of of action points to allocate to movement, attacking or using skills; each has their own pool or allotment. This means that instead of having to weigh movement against skills, attacks against movement, and skills against attacks, the only thing that has to be considered is whether I would get more value out of my limited action point pool by using a skill this turn, or next turn. Thus, while the intent of complex mode is to provide slower and more tactical gameplay; in actual play, it seems to only make the game inordinately difficult in the beginning.

As it turns out, iOS isn’t the first platform Shieldwall Chronicles released on—that honour belongs to Steam. Nevertheless, the port is quite admirable… as long as the device it is played on is an iPad. While technically released and playable on iPhones, and while it does support cloud saving (only for iOS devices) for easy switching between phone and tablet, it is simply not suited for a smaller device. The screen is just too small, and there is too much that needs to fit on it for the game to really excel. Despite that, however, it is playable, although not as comfortably as on an iPad—any iPad.

All things considered, Shieldwall Chronicles is a pretty solid game. It needs some work—specifically on the complex combat system, and for play on smaller screens—but, on the whole, it is a fun, well made game. When there are so many games that are made for consumption and consumption alone, it is good to find one now and again that is made by someone who cares, for players who are looking for quality. Despite its flaws, Shieldwall Chronicles: Swords of the North delivers just that.