So here’s an interesting question: Is Revolve8 (Free) really an RTS game like Sega claims it is? Well, yes, by the widest definition anyway. Before diving into the guide part of this guide, allow me to explain.

There’s definitely resources to manage, a base to protect, and real-time decisions on which units to place on the playing field, so most of the RTS boxes are indeed checked. But Revolve8 has more in common with games like Clash Royale or the recent Command & Conquer mobile title than PC games from that genre, with a card-based system for collecting and leveling up heroes and units that should feel very familiar to anyone who’s been paying attention to mobile games for the last few years.

That said, there’s an interesting story behind all of it and an impressive single-player mode too, not to mention a very unique art style concocted by its all-star dev team. Those might be enough to help Revolve8 carve out a niche for itself, so let’s start talking about the tips and tricks you need to know to avoid getting your butt kicked, shall we?

Revolve8 Tips for Beginners: The Basics and Object of the Game 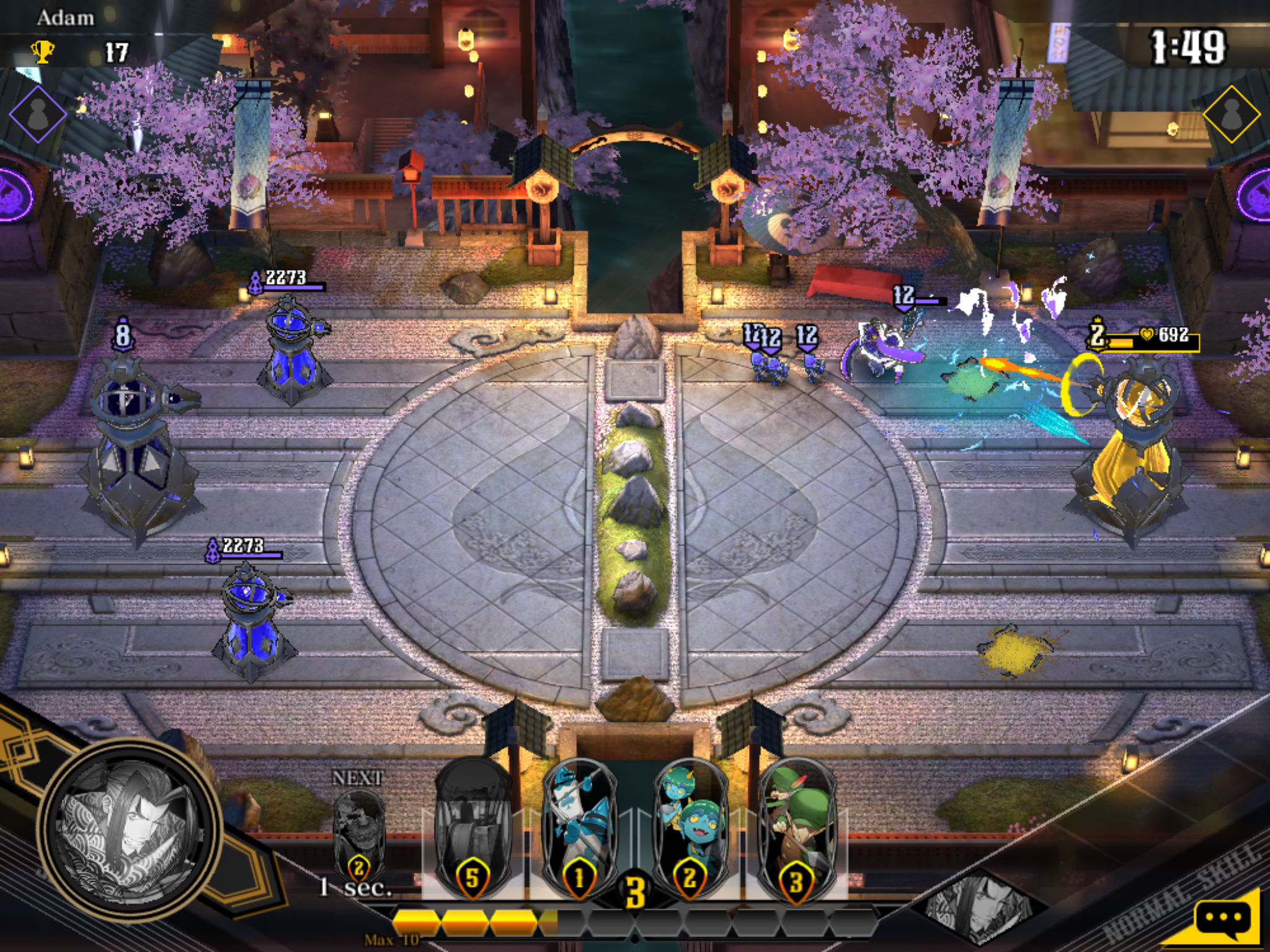 If I simply said here, “take Clash Royale and turn it sideways," there’s a good chance that most people who stumble across this guide would know exactly what I mean. Revolve8 matches pit two players against each other with the goal of destroying the opponent’s main tower, which in turn is protected by two smaller towers. There’s also a time limit for each match, so if no one destroys the other’s main tower, the win goes to whoever has destroyed more small towers (those count as one point each) or whoever scores the first tower takedown in overtime if the score is tied at the end of regulation.

The heroes and units available to you are displayed as cards at the bottom of the screen, along with a number that represents their cost to play in Ink — which, trust me, makes sense in the context of the game’s story. The Ink meter fills from left to right over time, and when you want to play a card, you simply drag it onto the playing field, with legal areas to summon helpfully highlighted for you.

A big part of mastering the play, as in many mobile RTS games, is knowing which units counter each other properly, and then playing them at the proper moment and location. However, the heroes in Revolve8 also possess skills that you can activate: All heroes’ normal skills will display as small buttons in the lower-right, while the designated leader of your deck will have a large button for his or her SP skill on the left. Playing these skills at the right time can be the difference between pulling out a closely fought battle.

Bonus tip 1: SP skills only become available with two minutes remaining in a match, and they can only be used once per battle, so pick your spot wisely.

Bonus tip 2: Since heroes have skills and minions/units do not, there’s really no good reason not to have the maximum of four heroes in any deck.

What to Do Before You Dive Into PvP

While it’s too early to say for sure how good or bad the matchmaking system is in Revolve8, one thing I can say with some certainty is that if you make a head-on leap into PvP too soon, you’re going to get crushed. Even in League 1, where you and your opponents will have limited cards from which to choose, the people you come up against will already have much more powerful cards.

The simple solution to this is to not get too carried away playing PvP matches until you’ve completed the game’s tutorial and explored some of the solo levels, which you can find by tapping the ‘Quest’ button on the main navigation bar.

Here you’ll find both Main Quests, divided into a series of chapters (nine at launch), which lay out the lore and introduce you to important gameplay concepts. Each chapter is divided up into a series of battles against the AI with specific win conditions, interspersed with story bits that you can either read, listen to or skip.

There are also Hero Quests, which explain the back story of a specific hero and give you pointers on how to use them effectively. You might even learn why the Emperor is running around the game naked if you don’t already have an idea on your own.

In any case, playing both types of Quests is a good idea not just to learn more, but also because they reward you in both Jewels (the premium currency) and gold. There’s no energy mechanic or anything to stop you from playing as many Quests as you like, but take note that additional ones won’t unlock until you move up to the next league, so in that sense, the solo and PvP modes really do work together here.

How to Get Free Cards in Revolve8 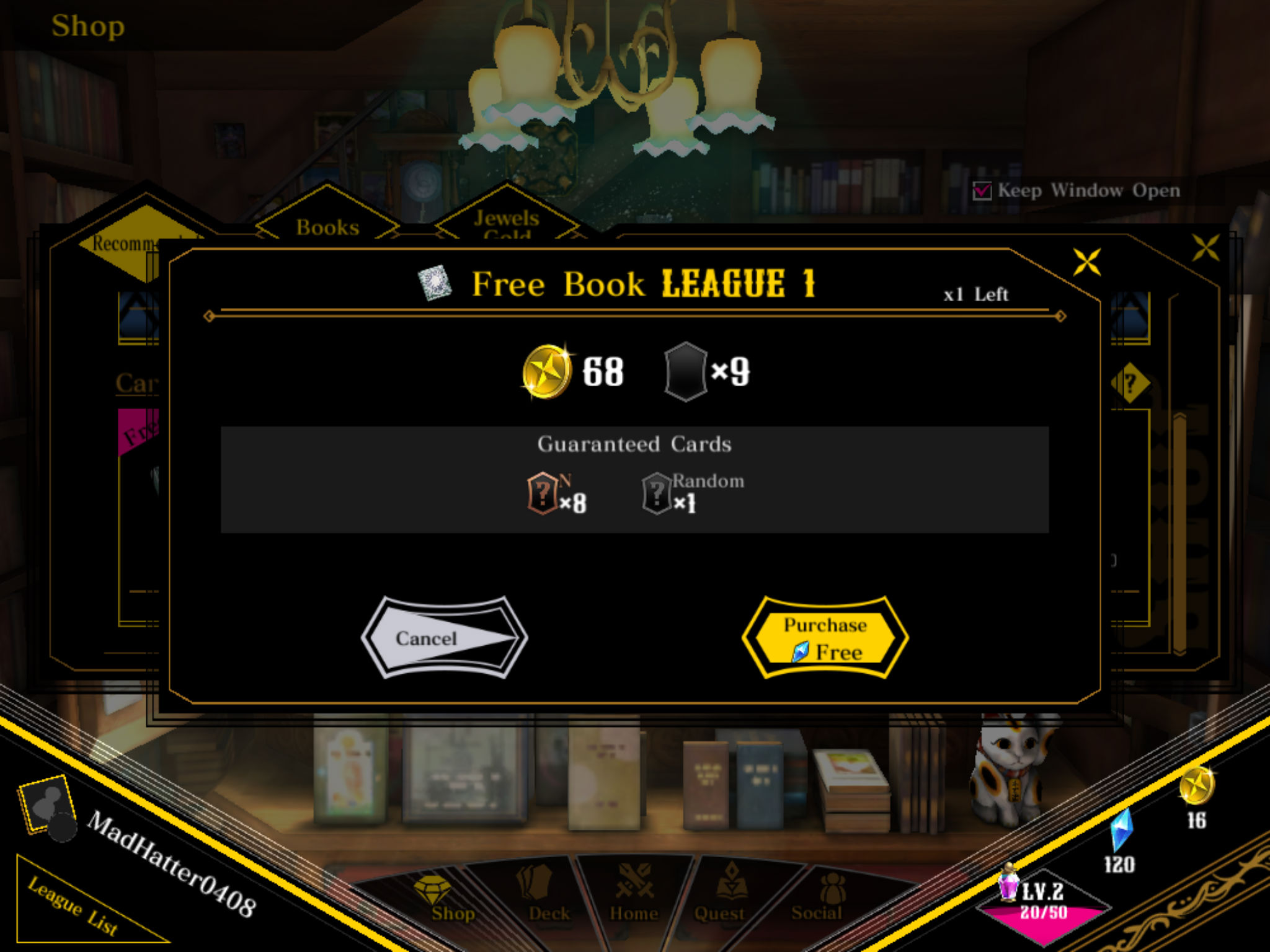 Not going to lie, this is the big one, maybe the only reason you are reading this guide and put up with what I’ve written so far. You need more cards to unlock more heroes and minions and level up the ones you already have, and you’d prefer not to pay for them. Fair enough.

Cards come in books, which are powerful artifacts in the world of Revolve8. You can buy them for Jewels in the Shop, but you can also score some for free. Here’s how:

You can, of course, buy books in the shop to get cards too, and that technically can be free if you haven’t paid for the Jewels. That sounds like a silky segue to me …

How to Get Free Jewels and Gold 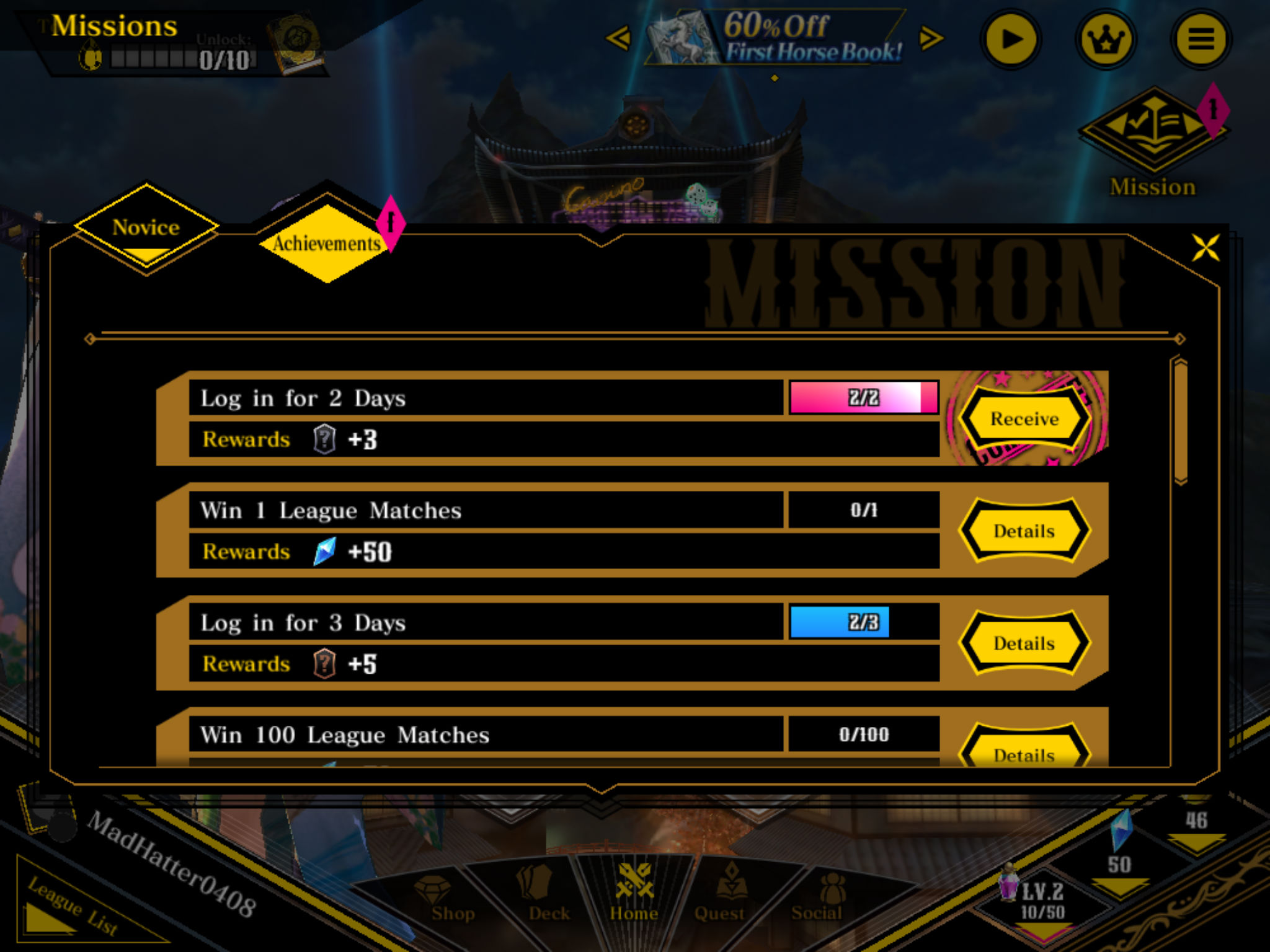 A quick refresher: Jewels are the premium currency, and you can use them to buy books in the store or skip the timer on reward books won in battle. Gold is needed to help level up your cards in addition to owning the proper number of copies of said card.

So both are important, and you can nab some of each for free. Let’s review:

Bonus tip: How should you spend your jewels? It’s up to you, of course, but the consensus of people who have been playing since the game was in beta is that you get more bang for your buck by buying books instead of using Jewels to skip the timer on your match reward books.

How to Level Up Your Cards

For some reason, Revolve8 makes the process of leveling your cards a little trickier than it should be, or at least a tad less intuitive.

When you have cards ready to be leveled up, you’ll see a green number down in the bottom nav next to the ‘Deck’ button.

Once you tap on that, you’ll be taken to the deck construction screen, and the cards that are ready to level will have green arrows next to them. 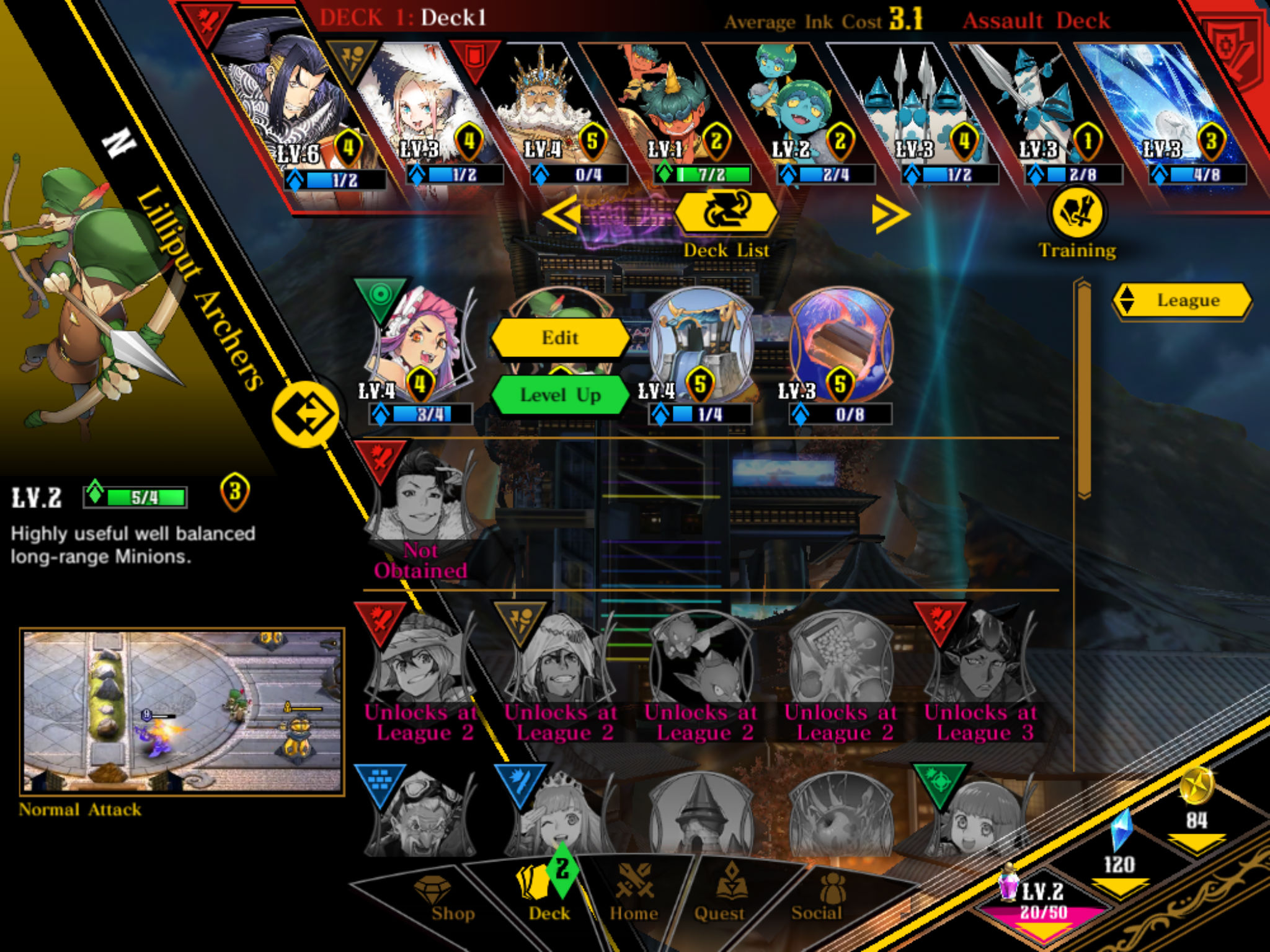 If a card is not in your current deck, the process is easy: Just tap  on it and you’ll see a green ‘Level Up’ button. Tap on that bad boy and as long as you have enough gold, you’re all set.

The extra step is for cards that are in your deck. For them, you need to tap on the card, then tap on the yellow arrow icon that will briefly say ‘Lv. Up Possible.’ Then look for the button in the lower-right corner of the screen and tap it to actually level up your card. 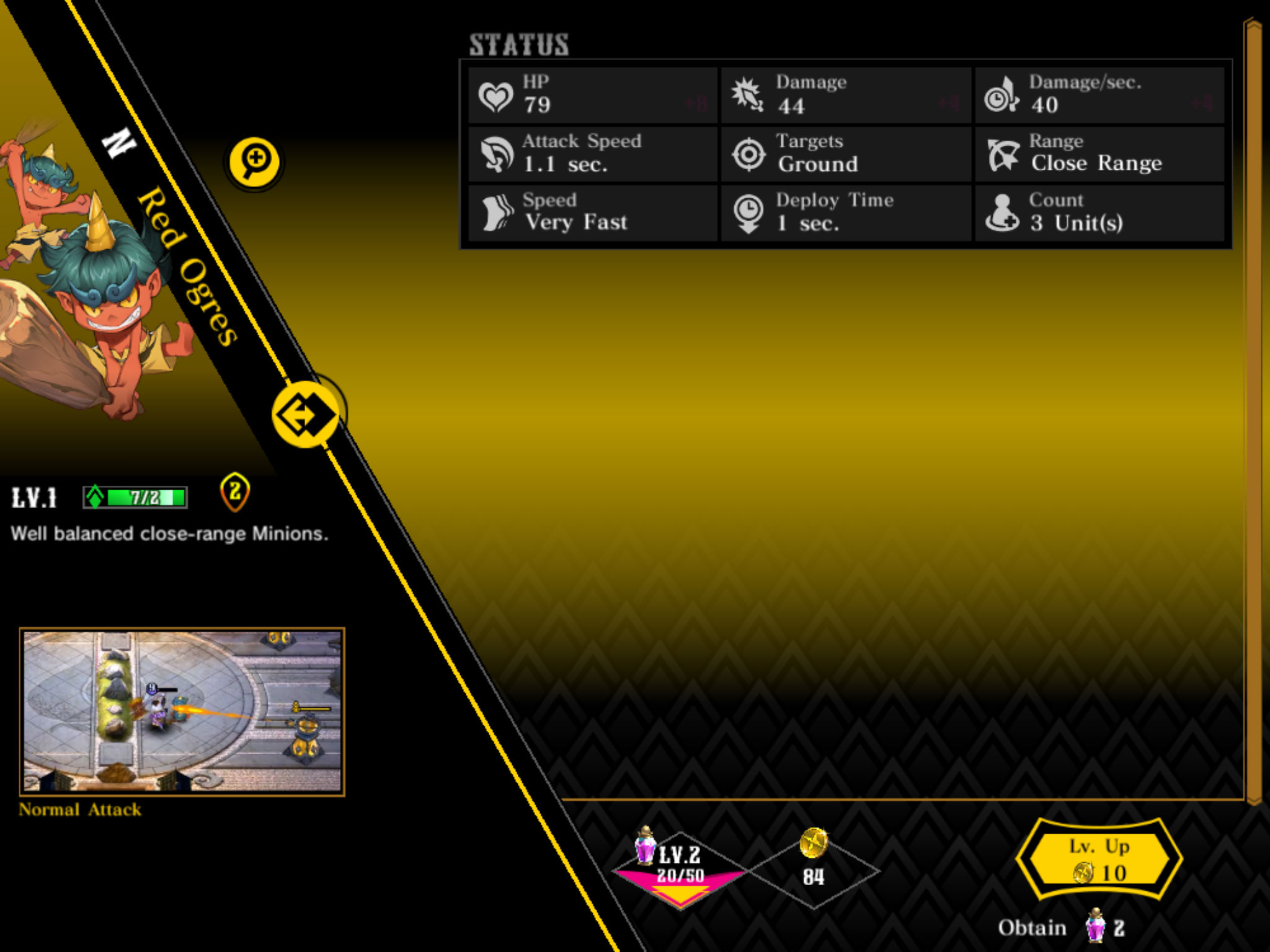 It’s not clear why there’s this extra effort needed for the cards you are already using the most, but at least I’ve hopefully cleared things up for you. Good luck mastering the game.