I don’t think it’s hyperbole to say that Threes was revolutionary when it arrived in early 2014. Its “swipe to move the entire board" gameplay was a perfect fit for a touchscreen phone and brought with it a unique type of strategic high scoring gameplay. As is the case with pretty much anything new and unique on mobile, many games in its wake copied that core mechanic from Threes, whether wholesale (*cough* 2048) or just by building different types of mechanics on top of it. In the case of Kenny Sun’s new release Twinfold ($3.99), its elevator pitch is “Threes but mixed with a roguelike dungeon crawler" and it’s absolutely stellar. 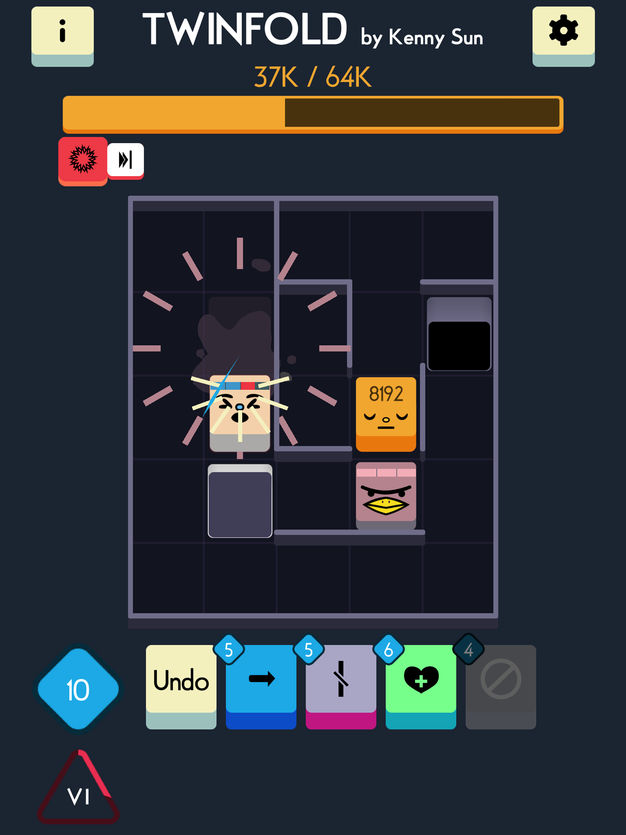 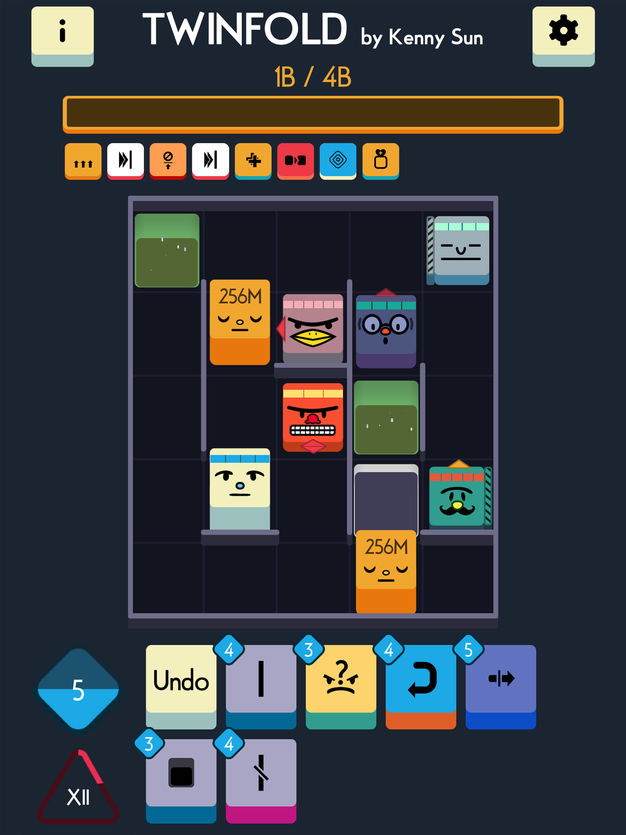 You’ll start on a randomly generated game board with at least a couple of enemies spawning around you, as well as a random setup of walls creating the “dungeon." You swipe in the cardinal directions to move your character as well as any enemies in that direction. Enemies have a number on them and, as you might have guessed, can be combined into each other to double that number and smush them into a singular enemy. You can also move your character onto an enemy and that enemy’s number will translate into XP which fills up a progress bar at the top of the screen. Defeat or combine all the enemies in a room and the walls will disappear and reappear in a new configuration, signaling the next “room" of the dungeon.

Those previously described enemies are passive but there are also active enemies that will pursue and attack you. These guys have a life bar displayed as a headband of segments and the trick with them is to plan your movements in a way that they’ll run into walls trying to get you. Each time they hit a wall they’ll lose a segment of life. You also have a similar life bar and running yourself into walls will similarly deduct a segment of life, but you can also regain health by gobbling up enemies. Every time you fill up your XP bar you’ll level up and get to choose from 3 random power-ups to equip for the remainder of your run. These are all just the basics that you’ll learn in the first few games you play, and in fact there’s all sorts of additional details and gameplay wrinkles that you’ll learn by getting deeper into the game.

The kicker for me with Twinfold is that it doesn’t just feel like Threes with some extra game mechanics tacked on. The movement style and combining sure, that’s Threes through and through. But Twinfold is a highly tactical game that’s all about really thinking through and planning your movement. It feels like something wholly new rather than one type of game mechanic with another genre bolted on top, as many Threes riffs feel like. This is all done with the level of quality and craftsmanship that we’ve come to expect from Kenny Sun. I have a feeling that the Twinfold rabbit hole goes extremely deep and this will be the type of game that people will chew on and be figuring out new strategies in for years to come. If you enjoy the types of games that Michael Brough puts out like 868-HACK or Imbroglio, and enjoy the mechanics of Threes, I can pretty much guarantee you’ll fall in love with Twinfold.