Nintendo’s Dragalia Lost (Free) seems to be getting new content far quicker than most mobile games. After announcing changes and future events, a new event and a new summon showcase are both live in game. Alongside these bits of new content, the team announced changes to the Daily Login bonus and the previously announced Tenfold Summon Voucher has now been distributed so check your gift boxes.

“A Wish to the Winds" sees players try to acquire a Wind Shrine which is exclusive to this event. You have a chance to build one for your Halidom by taking part in the event. Event-specific wyrmprints let you receive more windwhistle grass which can be used to upgrade the Wind Shrine. This event is on until November 26th at 1 AM. You also need to have cleared Chapter 2/ 1-1 to participate in event quests. The new Summon Showcase is “Winds of Hope" as revealed earlier and it is on until November 30th at 1 AM. Louise is the featured adventurer while Garuda is the featured dragon for this event. Going forward, the daily bonus will reward you with 5000 mana instead of 1 quality honey for Day 1, 5000 mana instead of 3000 mana for Day 2, 20000 rupies instead of 10000 rupies for Day 4, and 2 exquisite honey instead of 1 exquisite honey on Day 8. All players who have played the game before November 15th will get 3 quality honey for this change. 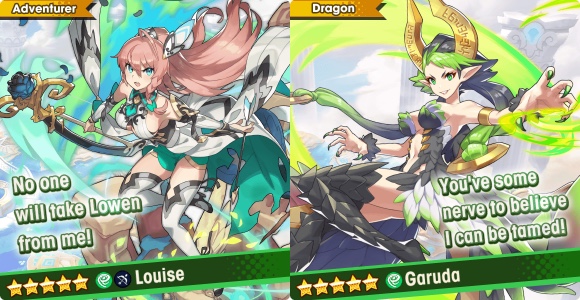 I’m still very impressed at the pace at which content is added to the game. While you still need to use another iTunes account or sideload it for Android, the game is well worth your time so far. Dragalia Lost is free to play on iOS and Android Read our review of it here.