It’s a cat quest of an entirely new variety in Piffle (Free), full of ball-bouncing goodness, robots, and cat onesies. It begins with a short scene where you and your best pal – wearing matching cat and dog onesies – but you cannot meet for coffee as a robot appears and drag them off. It’s up to you to break blocks, defeat the evil Doc Block (I see that Spider-Man nod!), and save your dog-eared buddy.

Piffle is created by Hipster Whale and Mighty Games, two developers that have made some great mobile games to date. Hipster Whale brought Frogger into the 21st century with Crossy Road, and made the equally addictive Disney version of the game. Mighty Games is the team behind Shooty Skies and Questy Quest. Piffle is free-to-play with in-app purchases available for coins and items. Ads will be shown periodically; any in-app purchase will disable them altogether. 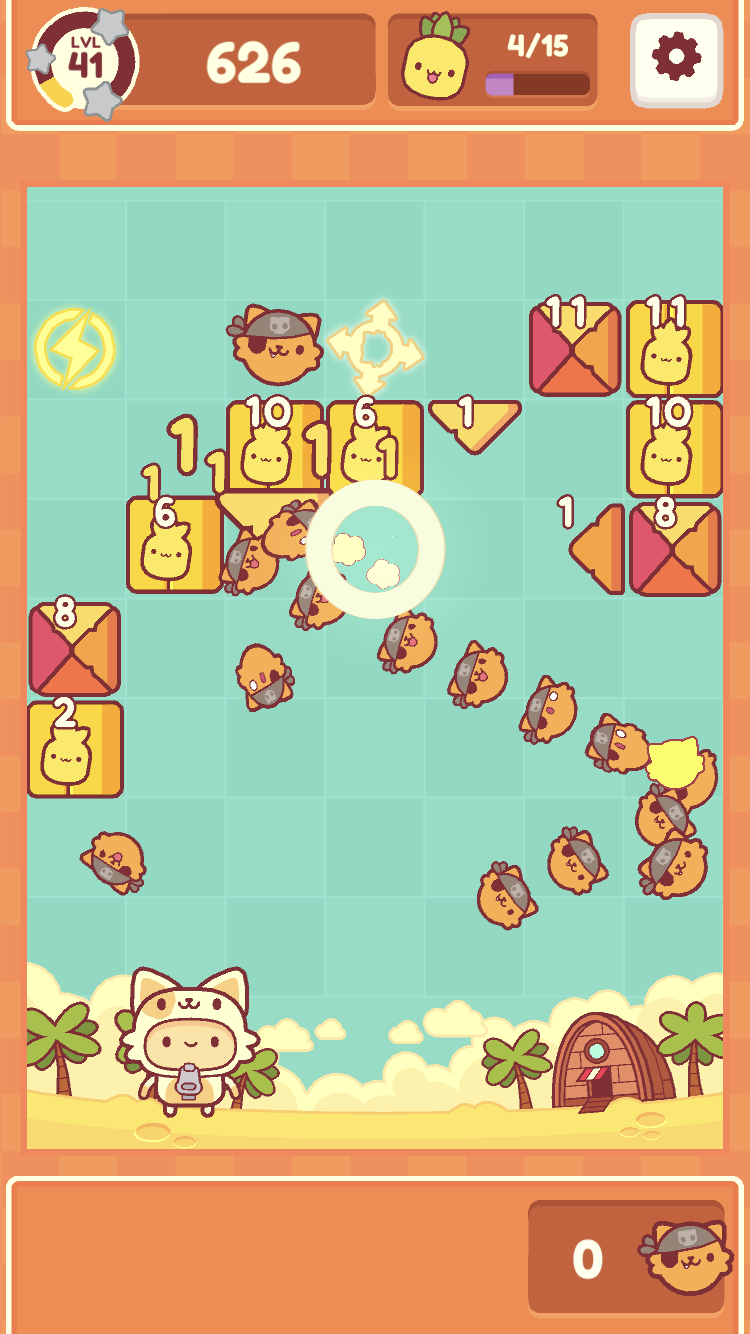 If you’ve played any form of brick breaker in the past, the gameplay of Piffle will be instantly familiar to you. You don’t need to catch Piffles as you would the ball in a traditional brick breaker; instead, your character jumps to where the first one lands and you take your next shot from that point. However, the gameplay still very much resembles a traditional brick breaker in that you have to make the most of each turn, trying to hit as many blocks as possible with every shot. The goal is to break blocks by hitting each the specified number of times.

You can pick up extra Piffles as they appear in the sky. Other than Piffles and blocks, Piffle-altering items will appear such as lightning bolts to electrify your party or spinning arrows that send them off in every which way. As you progress, new varieties of block will appear, such as ice cubes that glide back and forth, quickening their pace as they descend. If a block reaches the bottom, where your character is standing, it will crush you and you will lose a life. Lives refill slowly over time. To complete a level, destroy the given number of blocks, or in later levels, collect a given number of pineapple blocks (yellow, but function normally).

There is a good level of glee associated with watching dozens of Piffles fly across the screen, glowing and bouncing and making tiny little mew sounds. No matter how many features a game may have, or the amount of replayability it includes, there is nothing quite like the emotion an enjoyable game creates. For Piffle, that’s a form of glee mixed with childhood wonder. I mean, the balls are shaped like cats and meow for crying out loud, could there be anything cuter than that?! Levels feature a fast-forward button in case the Piffles get a bit whacky and will take quite some time to return to earth, which just intensifies the fun. 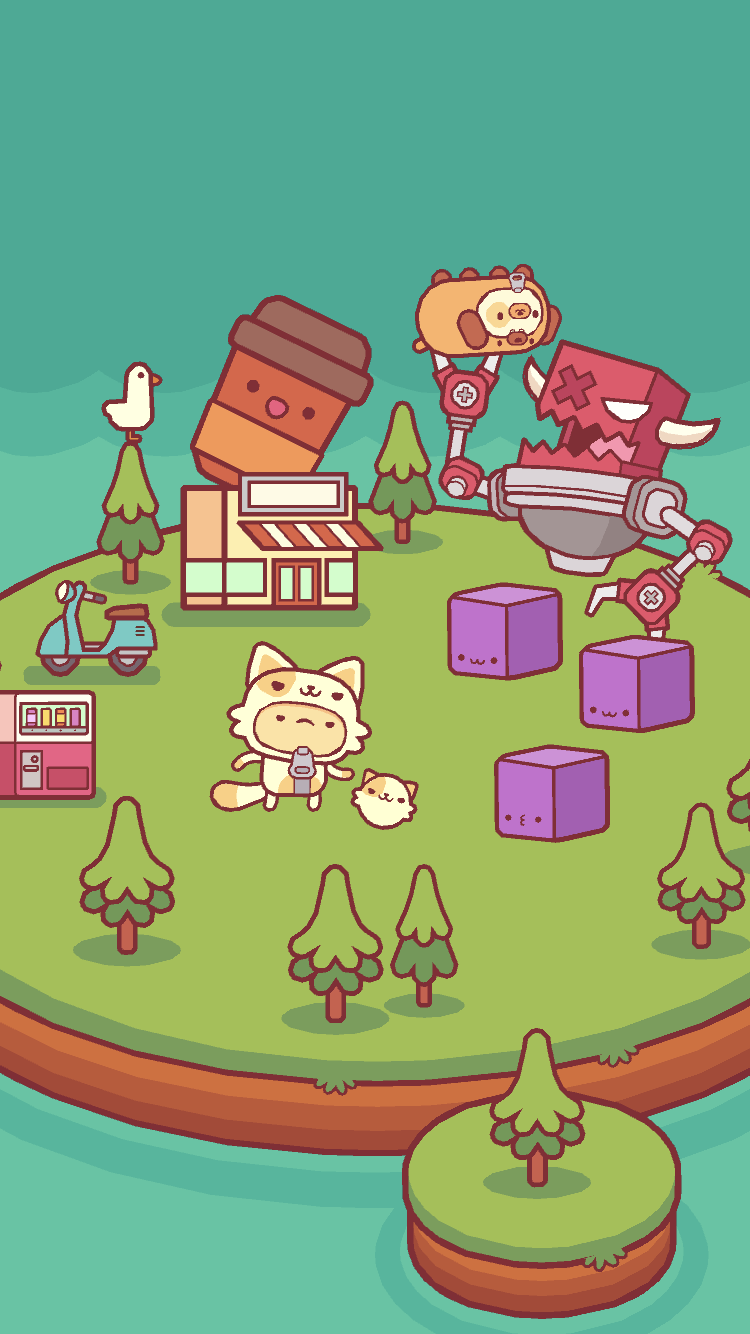 The game starts with straightforward gameplay an no extra, slowly adding items that can be used per level or once. Level items include super Piffle balls (adds a bit of extra oomph to your shots), bounce vision (extends the viewing distance of the trajectory significantly), and a can of Piffle balls (adds three Piffles to your starting number). One-time items that can be used once in a level include a bomb (blows up the area around contact), a mallet (to break a specific block), a stoplight (stops blocks from descending for a couple of turns), and a shuffler that shuffles the current blocks. If you run out of level items, more can be purchased for coins. Otherwise, both types can be found in treasure chests.

There are several ways to earn chests, such as getting three stars on levels. Passing a level rewards you with up to three stars based on your final score; you can always return to collect any stars you may have missed. After collecting 20 stars, you’ll receive a golden chest. You can also complete achievements to receive normal purple chests. Achievements are goals such as “break X number of blocks" or “three-star X number of levels." Any completionist will be keeping a close eye on this list just to say they’ve done it, but it’s just as easy to earn the achievements by playing the game since each is mostly a measure of time. 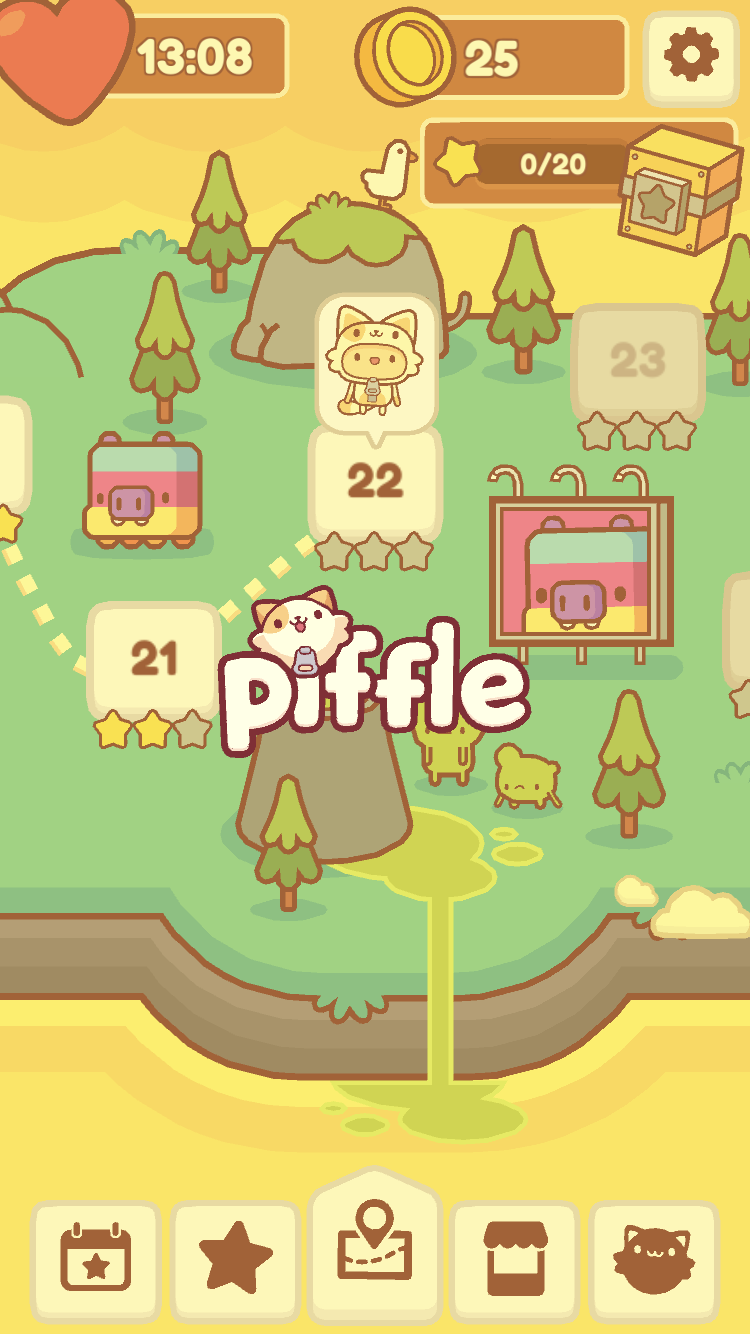 Piffle is structured like many other free-to-play titles, giving players reason to return each day (or multiple times in one day). The events tab includes daily bonus challenges (difficult, seemingly endless levels) and special events (for example, Snowball Quest starts later today and Dance Off starts next week). There is crafting available to create newly-styled Piffles; my current favorite is Patches the pirate. They don’t act any differently but look darned cute. The items you’re collecting are often things a cat may hoard, like a spool of thread or feather.

Each part of the game adds a layer of replayability. Levels can be returned to. Crafting is a form of collecting, and if you have a gotta-catch-em-all mentality you’ll obsess over it. Daily events are a given, as are special events. There are also online leaderboards to compare yourself (or show off) to your friends.

Hipster Whale and Mighty Games have created yet another amazing free-to-play mobile title with Piffle. The adorable factor is part of it, but it is also the incredibly smart design as a whole. The levels are never frustrating (although waiting for lives can be). The slow addition of anything “extra," from items to events, means the entire first day of play is filled with opening up new parts of Piffle. After that, it’s easy to settle into the gameplay and just enjoy your time sending cats flying into the atmosphere. I have played Crossy Road since day one and expect similar longevity from Piffle.