Welcome to your SwitchArcade Roundup for September 28th, 2018. It’s your splatter in spirit Phil with a final roundup to end the week that features news, new releases, and a heck of a lot of discounts. Before we get into all of that, let’s delve into our Game of the Day! 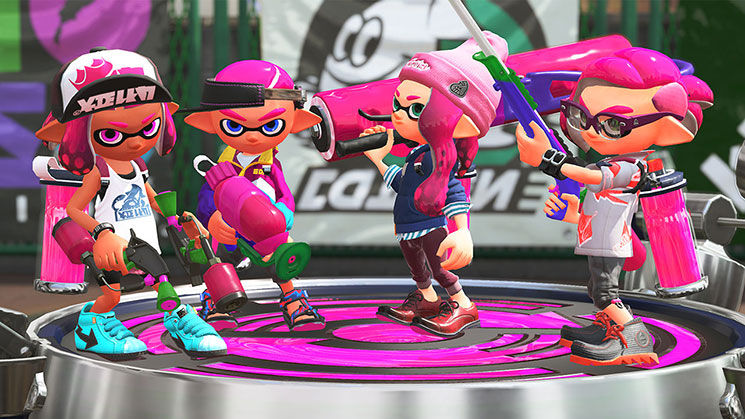 Since we have some Splatoon 2-related news later on today, let’s take some time to give Nintendo’s ink-splosive game its much deserved title of Game of the Day to cap off the week!

Splatoon 2 has been updated for more than a year now with both major and modest improvements in all of its functionality, balance, and modes–from a massive single-player update with the Octo Expansion, to the addition of a multitude of fresh maps, weapons, and gear. 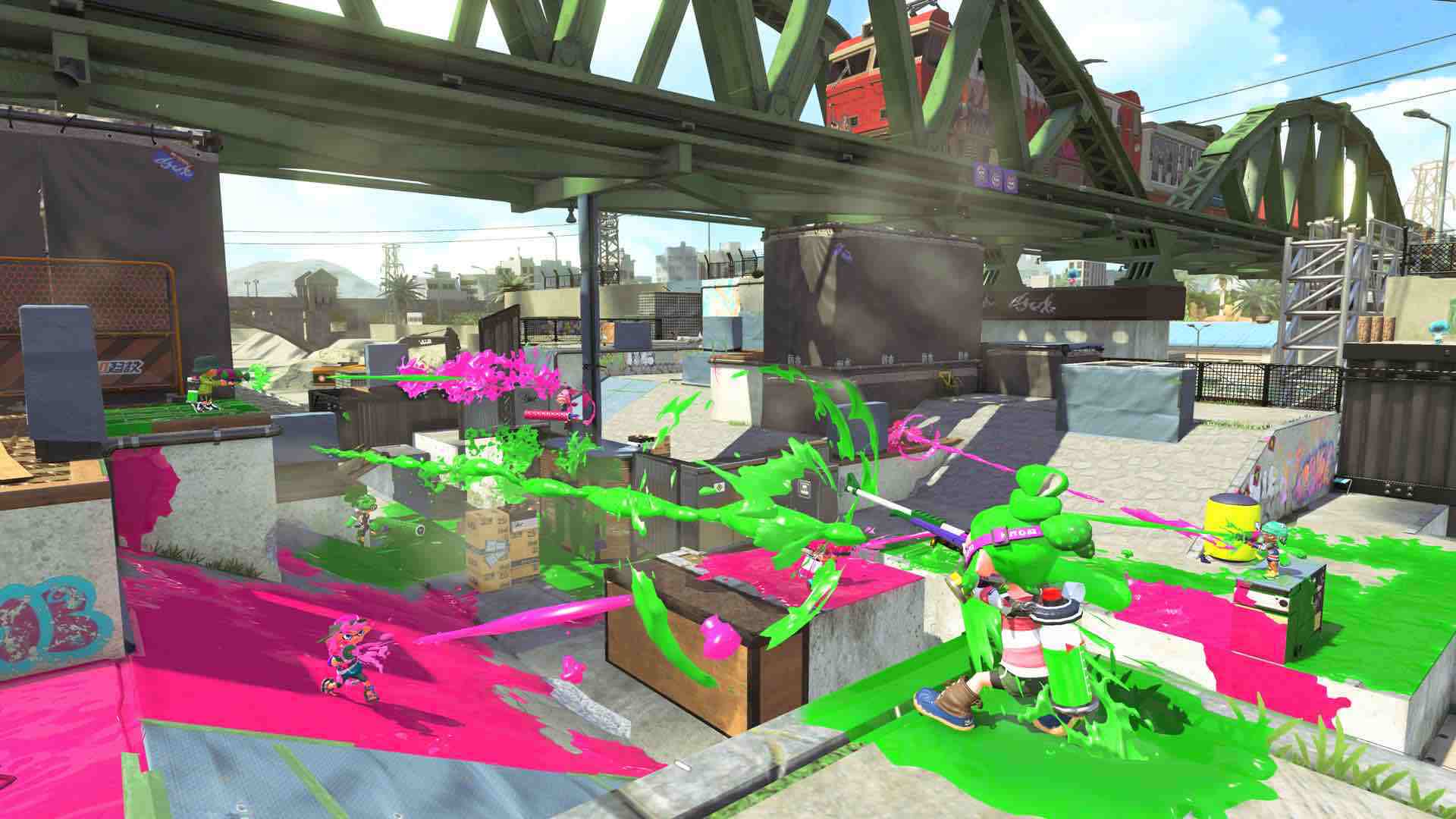 The core gameplay remains as clever and as enjoyable as ever, having players mark up walls and floors with their team’s own colored ink as not just a way to take control of as much of the map as possible (for the main mode of Splatoon 2, at least), but also as a means for multiple amounts of mobility. Inklings can dive in their own ink to travel faster and to traverse up walls that are otherwise too tall to scale. When they dive in their own ink, their splat guns refill, ready to splat more walls, floors, and foes alike. When in another team’s ink, it serves as a poison, slowing their run to a mere trudge and having them take slight damage, making them an easy target for opposing players. 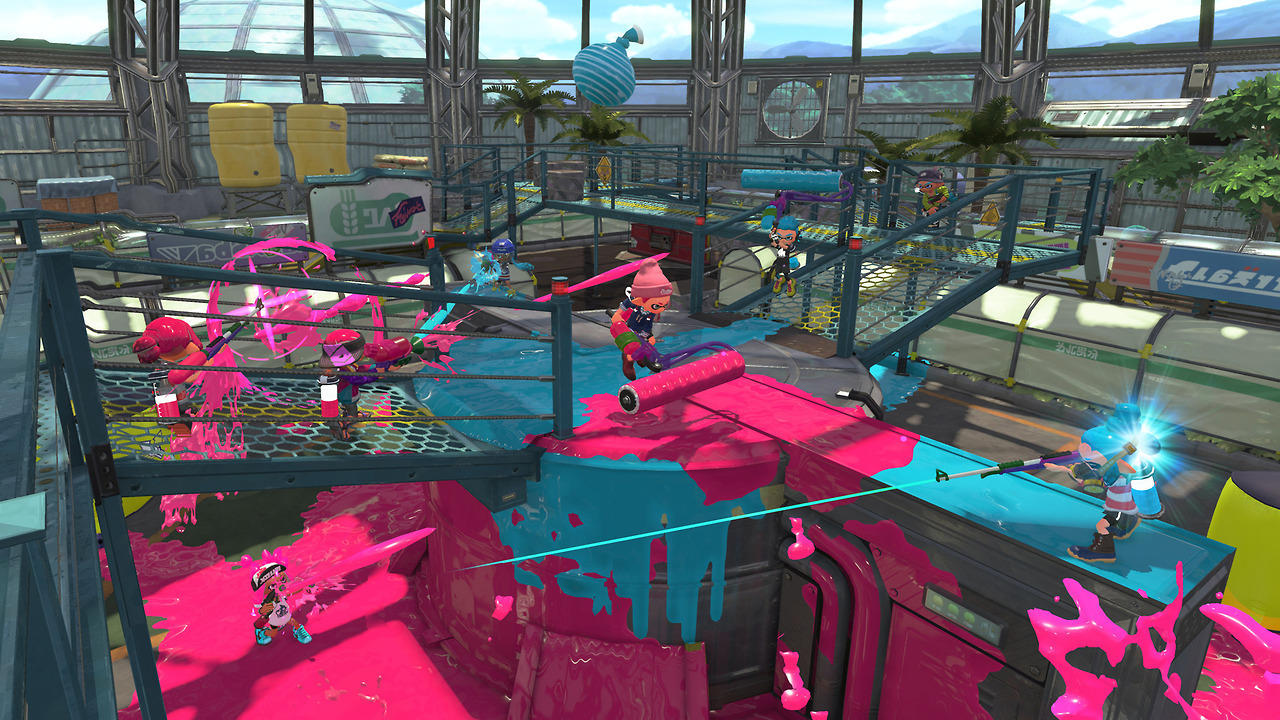 Splatoon 2 isn’t just one of the most popular multiplayer Switch games by accident. It says something that despite Nintendo’s online systems being basically the bottom of the barrel, fans of the game continue to play and enjoy splatting each other online. Splatoon 2 is just that good of a core idea, and one that has been expanded upon greatly to make for one of the Switch’s finest games.

Splatoon 2 Ver. 4.1.0 includes new goodies and releases sooner than you might think 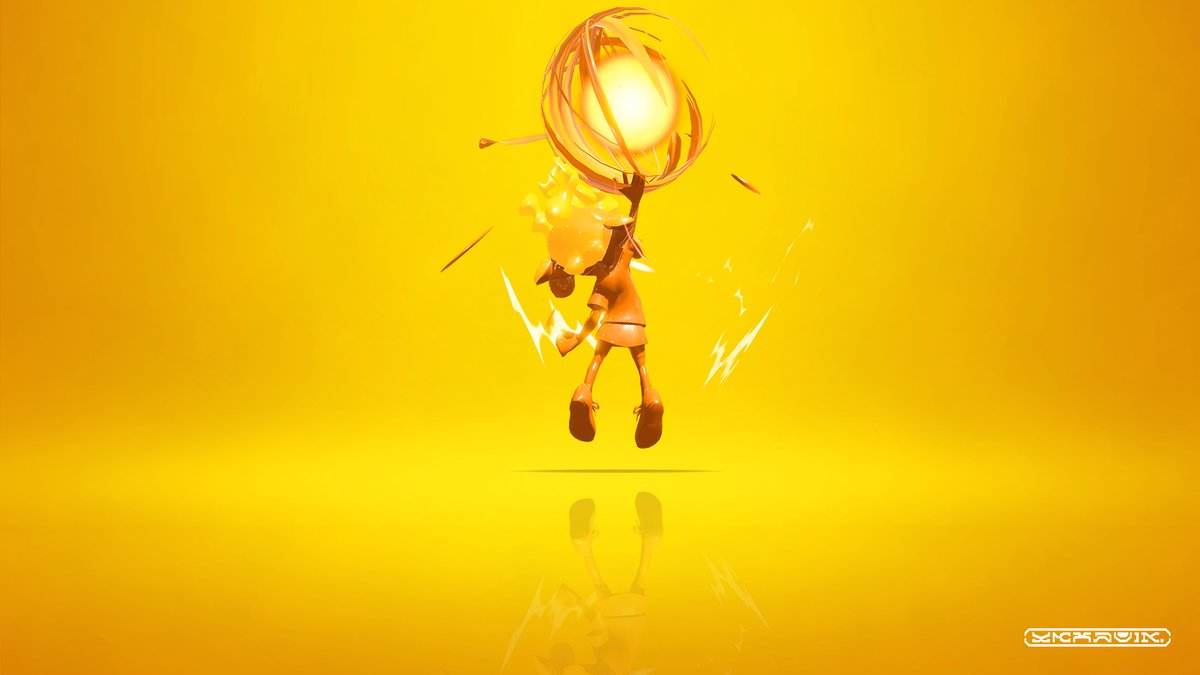 Nintendo’s Splatoon 2 is winding down a little bit when it concerns new content. The next update, Ver. 4.1.0, showcases the last planned stage to be added to multiplayer, Skipper Pavilion. In addition to the new stage for online battles, new weapons of the Sub and Special varieties will be added, as well as some new music.

One such new weapon of said Special variety, the Booyah Bomb, is very reminiscent of a certain Saiyan’s special move in the Dragon Ball series. The weapon causes your Inkling to chuck a charged bomb, resulting in a massive explosion. The Booyah Bomb can have its charge time shortened by having your team utilize the “Booyah!" command. “Inklings of Splatoon, lend me your Booyahs!"

A new Special Weapon called the Booyah Bomb is coming to #Splatoon2. Once activated, charge it up faster by signaling “Booyah!” Teammates can also get a small bonus to their special meter with "Booyah!" rally cries of their own! Unleash it once it's charged for a big inksplosion! pic.twitter.com/3aQRJYcwzk

From Fighter EX Layer, Skullo Mania will unleash fury on SNK Heroines: Tag Team Frenzy when Skullolady joins the roster. Already a favorite character of mine, Skullolady is the second crossover character to be added to the roster via DLC, and she will be live for everyone to download starting on October 11th. Check out Skullolady’s introduction with this all-new trailer:

For a full year Mario Tennis Aces is getting a new character a month to add to the roster. All you need to do to unlock them is to play an online Tournament match within the month of that character’s debut. Of course, for those who don’t want to subscribe to Nintendo Switch Online just to have characters ahead of time, you can always just wait the month after to unlock them. Essentially, playing a match online is early access to these characters.

Next month, the character that will be available early for online Tournament players is Birdo, who debuted in the North American version of Super Mario Bros. 2, way back on the NES. Birdo is no stranger to Mario sports games, even having appeared in several previous Mario Tennis titles. Take to the court with Birdo when she debuts as the newest Mario Tennis Aces downloadable character in just a few days.

After the success of Dragon Ball Xenoverse 2 on the Nintendo Switch, now comes Dragon Ball FighterZ, taking warriors from the Dragon Ball Z and Dragon Ball Super series and pits them against one another in up to 3 vs. 3 battles. Containing a story created specifically for the game, ranked and friendly matches, a lobby where you can engage with other players, and insane, hard-to-tell-it’s-not-the-actual-show anime visuals, Dragon Ball FighterZ was a game I held off on buying on my PlayStation 4 in hopes that it would somehow receive a Switch port. Looks like my waiting has paid off!

Whether you’re ridiculously stubborn like us Americans and call it “soccer" or know it by “football" like the rest of the world does, the sport is back on Switch, as is EA’s FIFA series for its sophomore effort on the Switch. Though not as content-rich as the other versions of the game around on different platforms, FIFA 19 does appear to improve upon the past year with better, improved gameplay for Switch owners. Plus, it’s still the only console version of FIFA that you can play anywhere you want.

Archery, combat, 6-player battles that are exclusive to the Switch version–oh my! Have some exciting days and nights with Towerfall, the party game that many players just can’t seem to quit. For good reason, too, as it’s quite addicting to fire off arrows at your friends and family (aka foes). The Switch version of Towerfall features all past DLC, the aforementioned battles for up to six players, and two guest characters from the indie hit Celeste. Make sure thy aim is true and let loose on your opponents today.

What do you get when you combine a card game with a tabletop board game and role-playing elements? No, not Final Fantasy Dungeons and Dragons: Texas Hold’em Edition. (Okay, even I will admit that was a forced joke.) Instead, you get Armello, available in its standard form and a complete edition, containing every major character, clan, and quest for less than you’d pay by buying them all piecemeal. While the involved rules of Armello won’t get your friends and family playing right from the onset, once a game does begin, you can bet it’ll be rewarding and a good time for all.

Set in a fantasy world, this 2D platformer takes on an 8-bit appearance, trying its best to be as authentic as possible to games from the NES glory days. Every area in Alwa’s Awakening is connected to one another, offering a Metroidvania approach to its design–complete with discovering new upgrades to reach previously inaccessible areas of the world. For beginning players, there’s an Assist Mode available, offering the ability to show item locations on the map as well as bringing players back to life directly at the spot they died at.

That does it for this week of the SwitchArcade Roundup! Next week ought to be quite exciting, as it sees the releases of Mega Man 11 on Tuesday and Super Mario Party on Friday. Until next week, I hope everyone has a fantastic weekend!

…What, I’m forgetting something? …Okay, you got me–Keep your Joy-Cons charged and your Switches loaded with great games!