KataKoto (Free) is a Japanese onomatopoeic word for when something is making a clip-clop or click-clack sound. It is also the name of a game about moving a little cube around various levels, trying to turn off all of the colors of the grid by matching them with the appropriate side of said cube. Both of these KataKoto can be pleasing if you’re in the right mood, and annoying if you’re in the wrong one. While not the most innovative of ideas, when things are going smoothly, KataKoto (the game) has a really nice rhythm to it. Awkward controls and forced ads spoil the festivities somewhat, but you still might find this an enjoyable enough way to spend an hour or two. 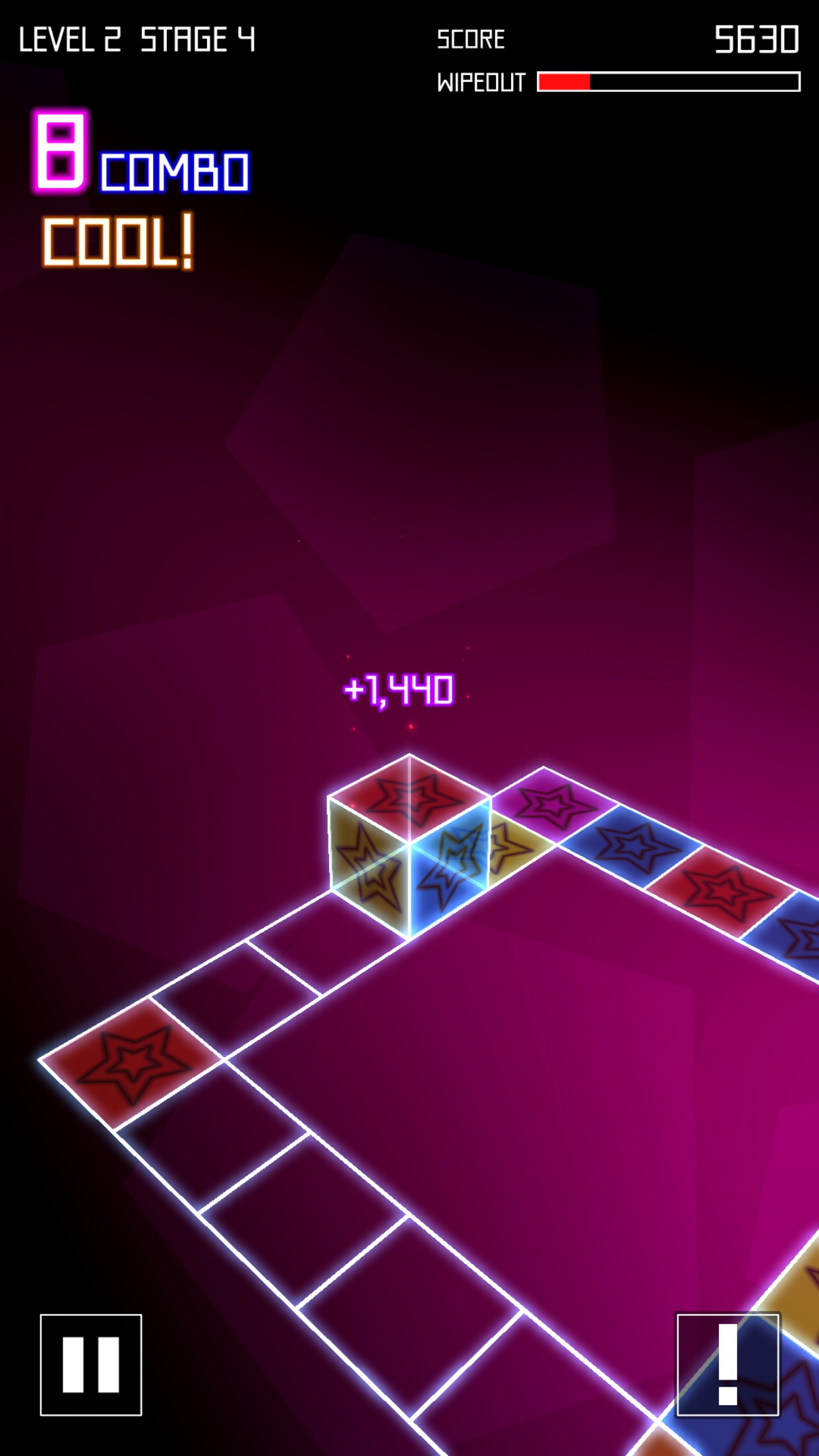 So, you’re a cube. These things happen sometimes. You’ve got two yellow sides, two red sides, and two blue sides, with each pair of matching colors handily painted on opposite sides from one another. All you can do is roll in one of four directions along the level’s grid. Fortunately, that’s all you have to do. You’ll see that some of the grid squares are filled in with a color. It could be red, blue, or yellow. It may even be purple, orange, or green. Your goal is to run over all of those grid squares, making sure that you’re touching them with the appropriate side of your cube. Match the colors up right, and the grid square will be left empty. Clear them all, and congratulations, you finished a level.

At first, you’ll only have one gameplay mode to play. The Challenge Mode has you run through 100 pre-built stages, earning the requisite three stars based on how well you solve each level. As you earn stars, you’ll unlock various cosmetic skins for the colored squares. There are quite a few, but if you’re pretty bad at the game and can’t rack up the stars, you’re not really missing out on anything too important. All you need to do to move forward is just beat the level, and you can frankly trial-and-error your way through even the most difficult of them given enough time. There’s always a proper route through, however, and finding it in each stage is the key to the fun here. Do that and you’ll have a nice smooth roll through the level, putting together a hefty combo and earning a high score.

Well, that’s provided you don’t have any control misfires, anyway. KataKoto is played from an isometric viewpoint, so it’s not always clear exactly which way you need to swipe to move. All you’ll lose from a wrong move is a little time, but time is of the essence in order to keep your combo going and make the most of the ace up your sleeve, the Wipe Out. As you clear the grid, a meter up in the corner will fill up. Once it’s full, you’ll enter Wipe Out mode, where everything comes up cube. Your cube will become one solid color, and all of the remaining filled grid squares will change to match it. You can clear out problematic areas or boost your score while Wipe Out is in effect, but it only lasts a short time. If the controls fail you here, you will definitely lose out on getting the best score possible. 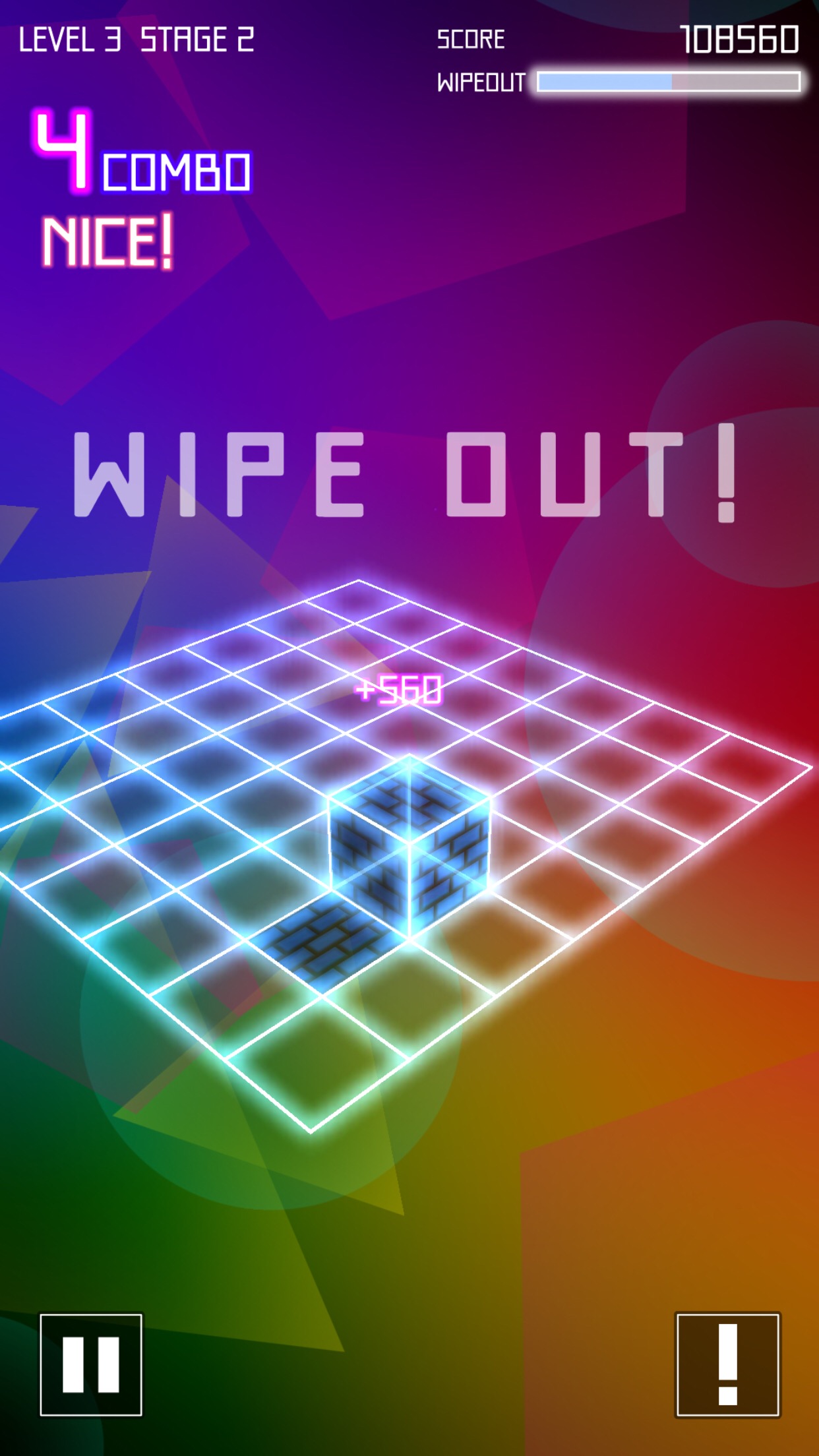 As you play through the Challenge Mode, you’ll eventually unlock the game’s other mode, Survival. In Survival Mode, you have to a randomized set of stages in a timed challenge. There are three courses of three different difficulty levels, and you’ll need to play through the entire Challenge Mode to unlock the third and final course. In Survival Mode, you’ll earn extra time by putting together combos, so it’s more important than ever to find the golden path through each stage. Aimlessly wandering around too much will end your run in short order. Clear all of the Survival courses and the Challenge Mode stages with three stars, and you’re all done with the game.

The visuals are simple and clean, the sound effects are satisfying, and the music is surprisingly good. KataKoto isn’t one of those games that you play purely for the aesthetics, but once you’re at the proverbial party, you’re not going to mind the atmosphere. The game is free to play, and indeed there is nothing you can buy at all even if you wanted to. Instead, you’ve got mandatory video ads that pop up every five levels in the Challenge Mode, and every ten levels in the Survival Mode. It’s a bit annoying that you can’t get rid of them by buying an IAP or something, but given how few people apparently buy such IAPs, I guess I can’t blame the developer for passing on including one.

KataKoto isn’t going to last you a very long time, but it’s engaging enough to keep you busy for a couple of hours at least. There’s no real reason to come back to the game after you’ve cleared all of the stages, which is perhaps the biggest weak point in the whole affair. The sometimes-fussy controls can be a bit of a bummer, and you’ll have to deal with the semi-frequent video ads, too. If you can cope with all of that, you might want to tumble KataKoto around in your brain for a bit. As puzzle games go, it’s a bit on the breezy side, but that might just be what the mood calls for sometimes.