There used to be a tv series that predates the App Store and even predates the majority of phone games. It was about adorable cartoon critters that were all friends and loved each other. They would in very short intervals meet very very violent and graphic ends. The name of this show was the Happy Tree Friends. The game I am looking at today reminds me a bit of the Happy Tree Friends in that you play as a lovable bear that, well… is responsible for some extreme violence. In a very cuddly way, I suppose. And technically, you’re a human wearing a bear outfit, but… close enough, right? Barbearian ($8.99) continues in a convincing manner the age old genre of top-down, isometric action games.

Barbearian carries itself somewhere between Kick Ass Commandos ($1.99) and Cat Quest ($4.99). It’s very easy to see why there is hype about this game. With playful colors and vicious combat there is a lot to catch the eye while you plow through hordes of enemies. There are times when I will get distracted just by small details like the shimmer on the surface of water or by the way my minions reorganize themselves each time I move around. The most regrettable thing about the game is also a selling point in a lot of ways. The perspective puts too much on the screen to take in the details like I did while playing Cat Quest. The trade off to this is that each fight feels more epic and more insurmountable. Waves upon waves of enemies crash upon your axe as you cleave through the masses in hopes to find out more about why you have been teleported to this strange land.

Unlike some shooter games, like JYDGE ($8.99), you’re M.O. does not stray from the ultimate objective of clearing through the horde of enemies axe first. Other than the side-mission of saving a minion each level, you need never look further than the tip of your axe to be led forward on your quest. There are no stealth missions nor creative objectives given at the start of a mission. Just pure hack and slash. While some may find this off-putting, I enjoy it as an unwavering focal point. You’ll never really wonder what you are supposed to do when you play Barbearian. Just swing away until you get to the end. 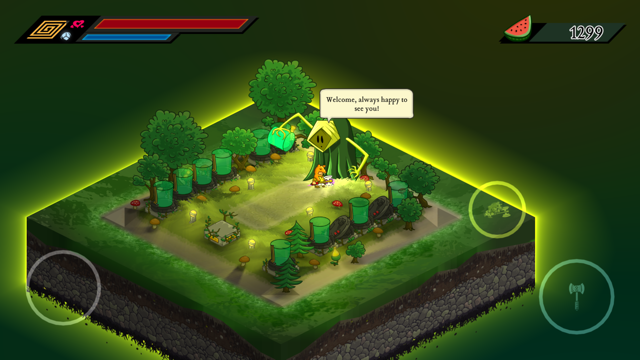 On your way there, the game offers a variety of buffs and boosts that can be bought with the game’s only currency, slices. These bits of watermelon can be earned by fighting enemies and completing missions. There are no IAP nor are there any ads or other types of distractions in the game. You can increase your health and mana pool, buy and upgrade minions, and purchase increasingly ridiculous ranged weapons that can occasionally spawn from slain enemies. The power of ranged weapons goes from possibly helpful to deleting half a screen of enemies. My favorite is the gravity gun which gathers up all nearby enemies and after a delay deals a moderate amount of damage. My favorite tactic with the gravity gun is usually to fire off a bullet and before it detonates, charge in and pop any lower health enemies and send them scattering. In addition to ranged weapons and an axe, you also have the aforementioned charge ability that damages and bowls over enemies that has a short cooldown, and a rage ability that slowly charges as you make your way through a level.

The feeling of wading into and through a rush of bodies feels like the essential lure of Barbearian. This is the game you want to play when you don’t want to wait for enemies to spawn, no matter how quick you manage to frag ’em. I mentioned JYDGE earlier and really this game comes in where I felt like JYDGE fell a little short. You can slide the difficulty sliders down to a point where you can succeed without much thought or foresight, but the great thing is that even on the default difficulty, this doesn’t work. You have to plan out your attack while still facing dozens of attackers at once. Depending on the makeup of the denizens currently facing you, your strategy might end up completely different. If a level has spawning crystals that summon new mobs, you may want to rush to them and disable them. But what if there are stun minions between you and them? You have to prioritize and enact different strategies to get through a level in one peice. The game is strategic without sacrificing speed of gameplay, and can be adjusted to offer a much easier arcade experience too. 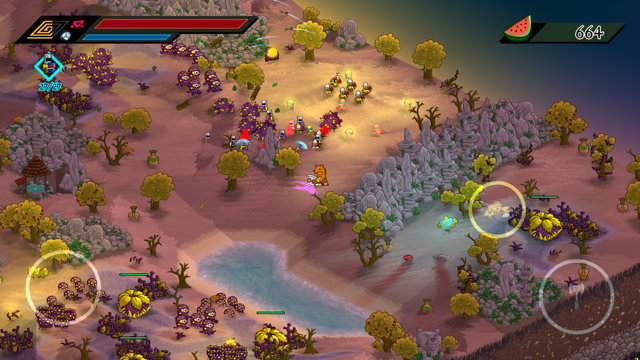 The question I think anyone is going to ask of this game is not if it is a good game. Even a cursory glance will show solid App Store feedback as well as a bright and vibrant display of carnage from screenshots and gameplay videos. The question is how does the game measure up to its $8.99 pricetag. The game shows estimates of about 12-13 hours of gameplay just to progress through the story, and with the normal levels plus boss levels this is a lot of shooting fun you can dive into. Ultimately you can customize how tough the game is and no matter how rough it gets, Barbearian will look gorgeous throughout and will feel amazing whether you use a MFi controller or the touch controls. It feels completely different when the difficulty is adjusted so there is value in getting into the options and fiddling around. When people ask where the good premium games are, Barbearian is one I will point to, with gusto.