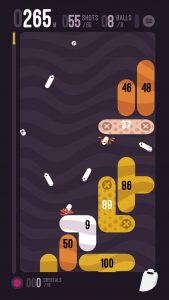 As you dig a hole in real life, it will become increasingly difficult as you tire out. With Holedown it’s similar, although it’s the challenge that ramps up instead of your exhaustion. From the solo developer of Rymdkapsel ($3.99) and Twofold Inc. ($3.99) comes Holedown, the game that takes ball bouncing underground. The neon colors and self-described “quirky acid space soundtrack” light up the otherwise dark world you are traveling through.

Holedown’s trailer evokes memories of traditional brick breaker games but in a very futuristic way, in large part due to the color scheme. There are six planets to bounce through until finding the core of each, but it’s not as simple as just falling and reaching it; instead, expected bouncing patterns are mixes with unpredictable ones so you won’t always be able to predict what will happen, and a limited number of balls means your moves must be carefully planned. That’s not to say holedown will be extremely difficult off the bat, as the game should slowly increase the skills required as the levels progress.

The minimal design of Holedown is meant to emphasize maximum fun, and with downright flurries of balls bouncing on-screen at times I can see how that may be achieved. Holedown promises one-handed play — always important for those who spend time standing on buses! — and an endless play mode, with five achievements, 11 leaderboards, and cloud saves across devices.

Holedown is developed by grapefrukt games, which consists one one man: Martin Jonasson. His goal with this title is to recreate the feeling from brick breakers when the ball gets caught in one place and bounces about furiously. He has collaborated with Niklas Ström for sound and music, and Catherine Unger for additional art. At this time, we are mere weeks away from downward brick breaking: it was announced on Twitter that Holedown will be released July 26 on iOS and Android.