Welcome to the SwitchArcade Roundup for July 5th! I hope your July 4th was good, regardless if you were in America eating some barbecue and watching fireworks, or elsewhere, enjoying a normal Wednesday. Unfortunately, developers decided that releasing a game after the holiday, and not before, so that people could spend said holiday playing games that released before, but I guess it’s the weekend coming up. Anyway, there’s a ton of new games today, let’s talk about them.

I don’t know why I was quite so excited for this one to pick it up right away, but I despaired a little at not being able to dive into this on the July 4th holiday. This is a fighting game with simplified controls and no complex button movements. All specials are done by holding a lower diagonal and holding A or B. What’s odd is that there are normal moves available by tapping A or B, but the difference between a tap and hold is slight at best. Thankfully, you can skirt around these restrictions by setting buttons to specifically be “Tap A” and “Tap B”, giving you a bit more control if you please.

Also, this game is surprisingly tough in singleplayer, with CPU opponents that are coming after you right away. It’s a definite trial by fire. Thankfully, the game offers lessons on how to use different maneuvers and tricks, and it does so in a minimalist fashion. So you don’t just get tossed around, if you’re a dabbler in fighting games like I am, you can learn the tricks that make Justin Wong and Punk who they are. Then, when trying to incorporate them into your play, you can get utterly smashed by the opposition. Fun stuff. I’m looking forward to diving more into this one and playing a bunch online.

This is a fantastic platformer for people who like time trials and speedrunning in particular. It’s ostensibly an auto-runner platformer, as you can play it that way on iOS, but with controller support it turned into a normal platformer. Though, getting super-fast times is a lot easier when the game is keeping you running constantly forward! Regardless, it’s a lot of fun – Shaun took the review on iOS and awarded it five stars, and I would have done the same if I had the review. Great game, and if you never played it on iOS, definitely check it out on Switch.

The conclusion to my favorite modern point-and-click adventure game is out now. If you bought the previous episode, you get a discount on this one. The conclusion sees the heroes Bwana, Kito, and Lina find Underland, but not everything is as it seems, with dark mysteries to discover in the jungle. The Afro-Caribbean themes are still a fantastic style for this series, and it’s absolutely, absolutely gorgeous. The music and voice acting are fantastic, too. Check out this series if you haven’t yet.

Online multiplayer fans, take note: this tower defense/strategy game features the ability to play in four-player matches, including two-on-two matches. It’s a hero-driven game, with 12 heroes you can command, and then you summon tons of units into battle, with over four thousand units able to battle at once. There aren’t a whole lot of options available for console strategy fans to check out online battle games, so this is a way to go. This is also on mobile as a free-to-play game if you want to check it out before playing it on Switch, or if the paid release sounds more like your thing.

This game originally released on the Vita in 2012 in Japan, before getting a revamp for modern systems, and seeing a release on a bunch of platforms, now including the Switch, and at a cheap price! Command giant robots into battle against smaller, same-size, and bigger robots, while you defend Martian colonies from some evil forces! There are 35 missions, a mode where you battle large hordes, and plenty of robot customizations. Worth it for the Gundam fan in your life, perhaps?

Often, when we hear of D3Publisher, it’s a game with hot men. Sadly, this game doesn’t feature any hot men, for people who want games about hot men. Instead, this is a point-and-click horror adventure/hidden object game where you can swap between the real world and a dark hallucination to discover the truth about the abandoned hospital he’s forced to collect supplies from. Also, there’s a weird cat. Which, all cats are weird creatures we can’t understand. Get a dog.

This isn’t actually a sequel to Bad Dudes vs. DragonNinja, necessarily. However, this is a Data East arcade beat ’em up featuring dudes who aren’t necessarily good or polite, but they don’t care much for terrorists. New York City got nuked, and 20 years later, the terrorist group Big Valley has taken over the nuclear wasteland, and it’s up for these two crude dudes, hired by the US government, to get rid of Big Valley and help clear New York so it can be rebuilt again. Because we can’t have Chicago become our replacement metropolis, noooo. Also, why don’t we build a New New York somewhere that won’t get ravaged by climate change, and would be safer from sudden nuclear strikes? Those are questions for a game besides Two Crude Dudes. This game just wants to beat up post-nuclear terrorists.

Pong meets baseball in this game by Toge Productions and Mojiken. You and an opponent battle to knock a ball around an arena, breaking your opponents barriers and eventually their crystals, to achieve the great victory that was foretold by ancient prophecy. It looks fun, and it kind of reminds me of Lethal League, which would be awesome on Switch. However, everything would be great on the Switch, but, y’know, where’s the lie?

Hey there Asteroids fans! This game features giant space rocks and vector graphics that totally weren’t inspired by Asteroids at all. Instead, this local multiplayer game uses the chaos of an asteroid-filled screen for local multiplayer shenanigans, as you try to be the last spaceship standing, while surviving a ton of debris. Though, joke’s on you: if any of this junk gets in orbit near your home planet, we’re talking instant Kessler Syndrome here.

This puzzle action game has you trying to kill all sorts of bad dudes (do not fear, eponymous Bad Dudes) and to make it look like an accident. Try to avoid being seen by cops, cameras, or bodyguards, and make those do-badders die from some vigilante justice. Though, I think this screenshot from the description of the game describes the tone it’s going for: 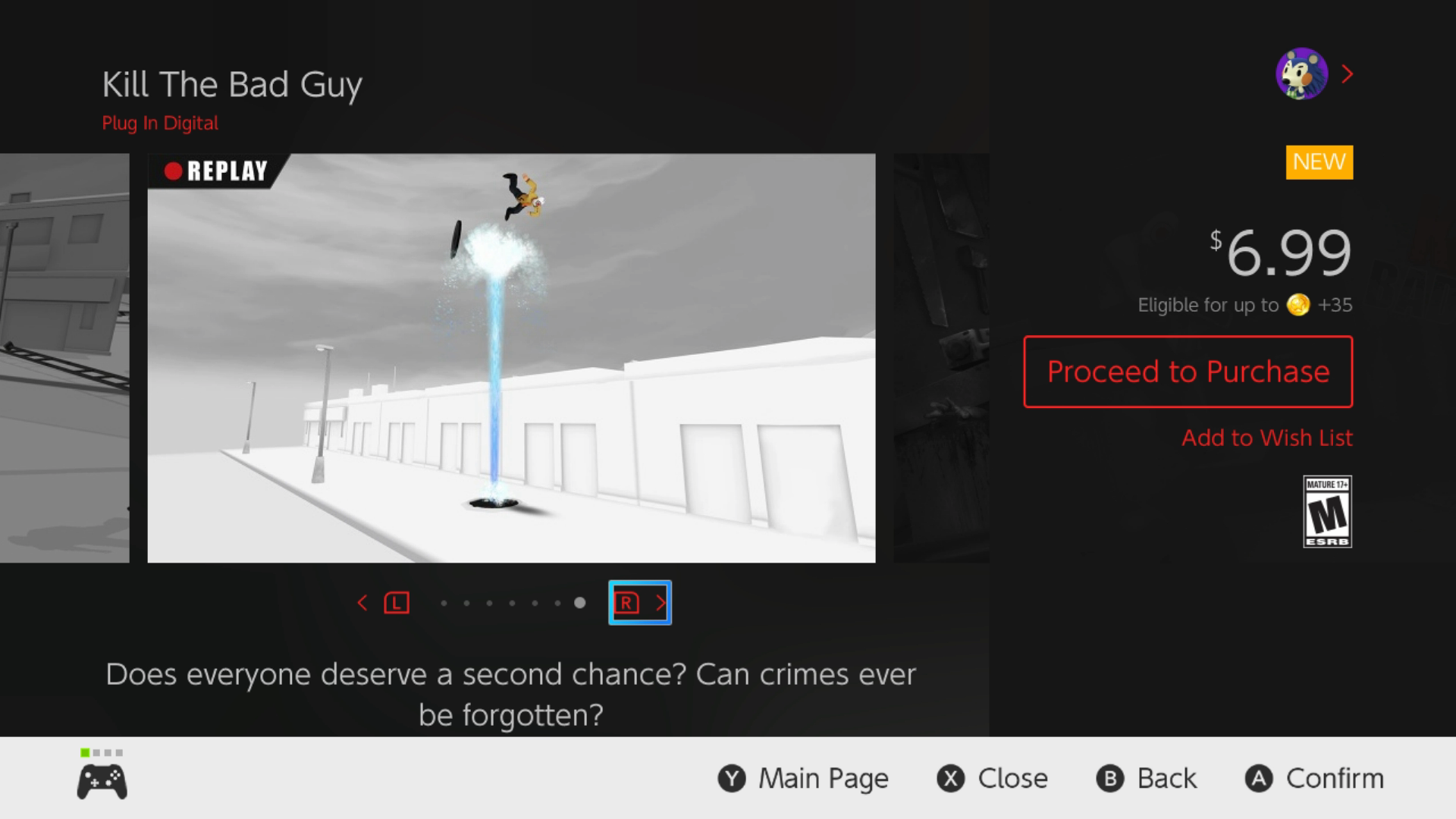 HAMSTER’s classic arcade release this week sees them reaching deep into the Samurai Shodown fighting game series to deliver the 2003 release in this franchise. Yes, the NeoGeo long outlasted every other 16-bit system. Granted, perhaps SNK just couldn’t get any hardware after that off the ground, but if NeoGeo was still good for it, then hey, why not? Contemporary reviews weren’t great, but I think that 2D games in general have much greater acceptance now that we’re more mature as a gaming culture and beyond the relative puberty period of 3D gaming.

I remember these Squids RPGs back in the early years of mobile. Well, the game wound up on consoles including the Wii U, and now Squids sees second life on the Switch. This turn-based RPG has you launching your squids across the battlefield, bumping into enemies, pulling off combos, and making strategic positioning really important. These games were quite fun back in the day, and I’m sure they’re well worth checking out in modern times.