If you’re tired of catching pocket monsters on your phone and want to try for something a little bigger and possibly with a lot more teeth, Jurassic World Alive (Free) is the game you seek. Is it lazy to call it “Pokemon GO with dinosaurs"? Probably! Is it easier to understand that way? Heck yes. Is it accurate? Well, sort of.

The central conceit of Jurassic World Alive is an awful lot like PoGO, in the sense that you hunt for things to collect on an in-game map that is overlaid on the real world — in this case thanks to Google Maps integration. Perhaps as an homage to the end of The Lost World, though hopefully not because that was the worst part of that movie, dinosaurs are loose in the real world. Your job is to get as many of them as you can on your side.

You can’t catch them by throwing a two-tone ball at them, as that would be silly. These are thunder lizards, after all. Instead, there’s a mini-game that represents you flying a drone to shoot darts at the dinosaurs and collect samples of their DNA. Get enough DNA strands and you can either unlock a new dinosaur or level up one you already own. Plus you can play God and combine two types of DNA to create rarer hybrid dinosaurs, completely thumbing your nose at the films that said that was a horrible idea. Once you have enough dinosaurs in your collection, you can form your best team of eight and take them into turn-based battles against teams formed by other players.

We’ll help walk you through all aspects of the game because we’re nice like that. Let’s start with the most basic question of all …

How to Get More Dinosaurs for Free

We did mention that Jurassic World Alive was free, right? Well it is, and you don’t even have to spend money on gacha-type stuff because finding more dinosaurs is totally up to you.

If you tap on the map button right in the middle of the bottom nav bar, you’ll call up a Google Maps representation of your current location (yes, you need to give your iPhone or iPad permission to share your GPS data). The map can be turned by tapping and dragging or pinched to zoom in or out. On said map, you’ll see the locations of relatively nearby dinosaurs, which you can tap on to find out how far away they are and more info about them. 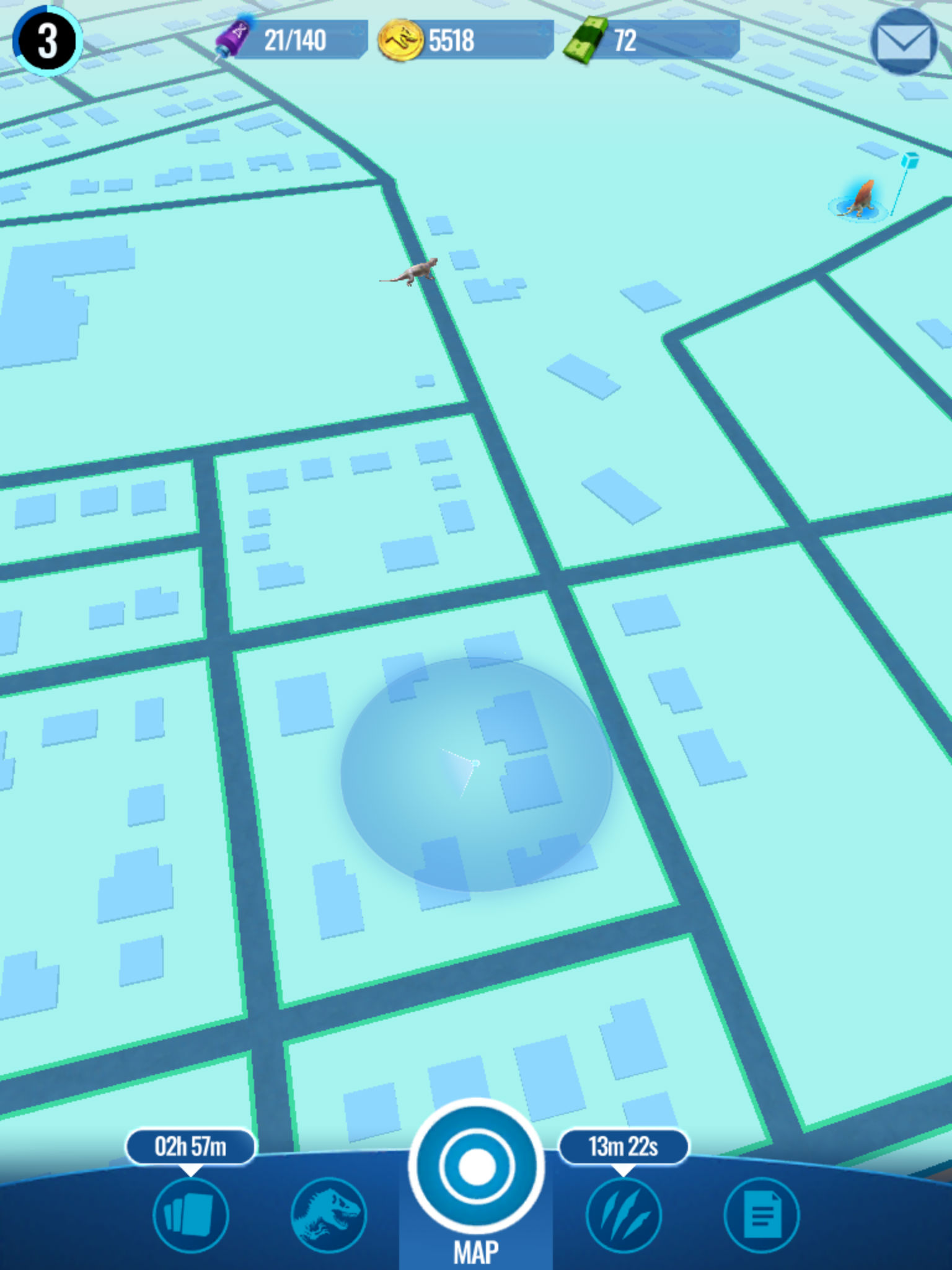 The blue pulsing circle represents the area in which your drone can operate, so all you need to do is move to where a dinosaur is within the circle to start the drone mini-game. Just tap launch and away you go.

You’ll then have a short amount of time to get as much DNA from the dinosaur as possible by dropping darts on it. Simply drag the crosshairs over the circular target area on the dinosaur and release your finger from the screen to fire a dart. The closer you get to the center, the more DNA strands you’ll acquire, with a bullseye rewarding you with the maximum amount for your current level. Dinosaurs aren’t that bright but don’t just stand there and let you dart them without moving, so you’ll have to account for them walking around. The dart also takes a second or two to hit the target, so getting good with the drone is a matter of aiming for where the bullseye will be in a second or so.

When your drone’s battery expires, you’re told how much DNA you’ve collected. If you have enough to create a new dinosaur, you can do so simply by tapping on the button that appears and parting with some coins, the game’s basic currency. There are other ways to get more DNA, and we’ll discuss those in this article as well, but the point is that you never should have to pay to get more dinosaurs. Unless you’re the really impatient type, that is, in which case we can’t help you.

How to Get Free Cash

Since this is a F2P game, there is a premium currency as well, and it’s been given the least creative but perhaps most appropriate name possible: Cash. You can use this to speed up incubators so they release their rewards instantaneously, as well as to refill your supply of darts when you run low. Cash can be purchased for real money through the magic (not really) of IAPs, but we prefer to get it for free when we can.

There are a couple ways to do that. The first is to long in several times a day, as there is a free incubator available in the ‘Market’ tab every six hours. The rewards within increase as your player level goes up — which you do by creating new dinosaurs and leveling up existing ones — but a few units of Cash are always part of the deal. 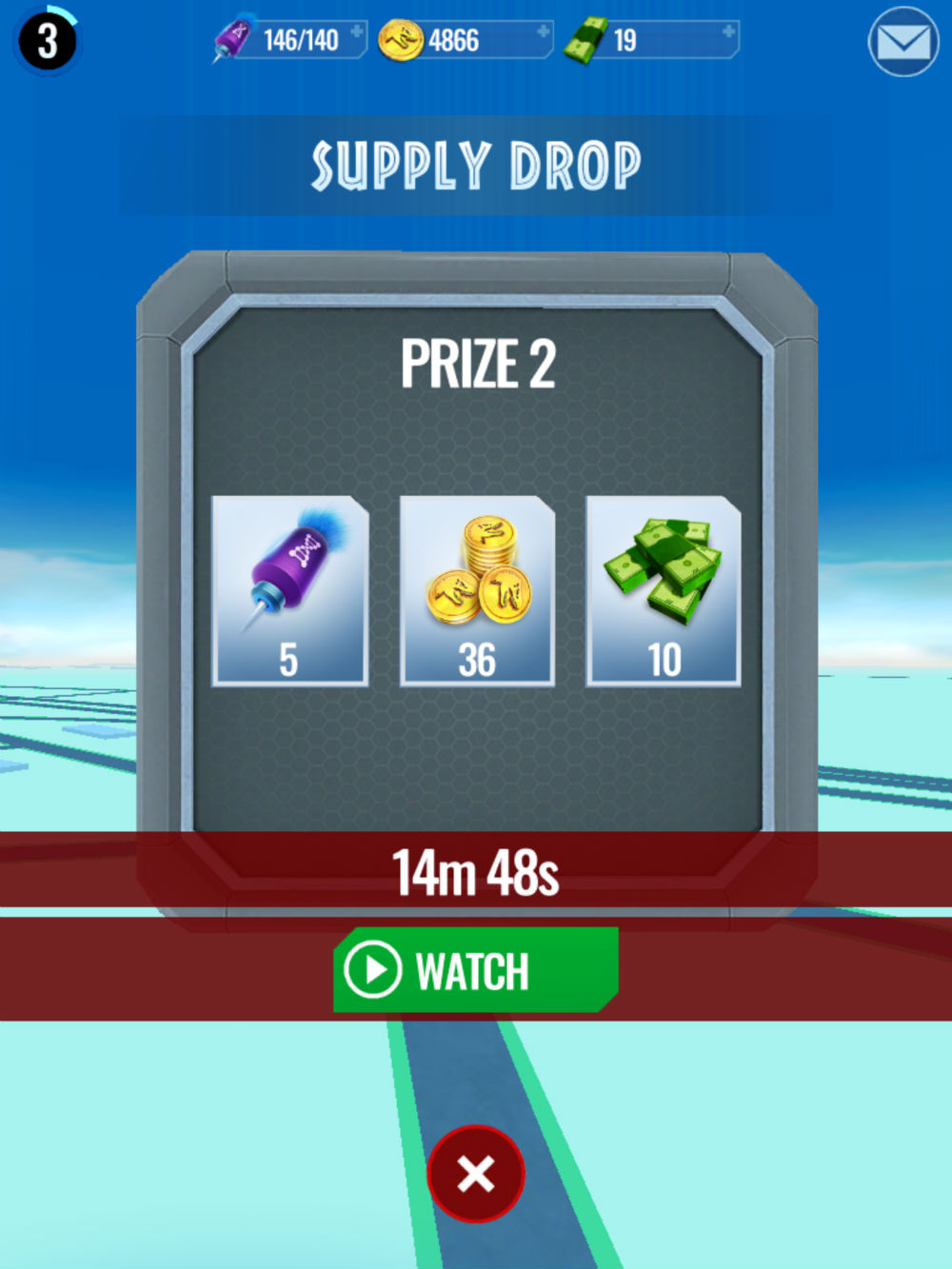 How to Use the Augmented Reality (AR) Features

Seeing dinosaurs on your screen is great and all, but seeing them in the real world is undeniably better. You can do that in Jurassic World Alive alright, just not while you’re playing the drone mini-game. That might be the one thing that surprises people who are accustomed to playing Pokemon GO the most.

Instead, you’ll need to go into your collection and tap on the profile of the dinosaur you’d like to see in AR. You’ll then see a small ‘AR’ button that you can tap to harness the awesome power of augmented reality for yourself. The next screen you see will ask you to move your device until you have a surface on which to spawn the dinosaur, which you can do by just tapping on your screen. 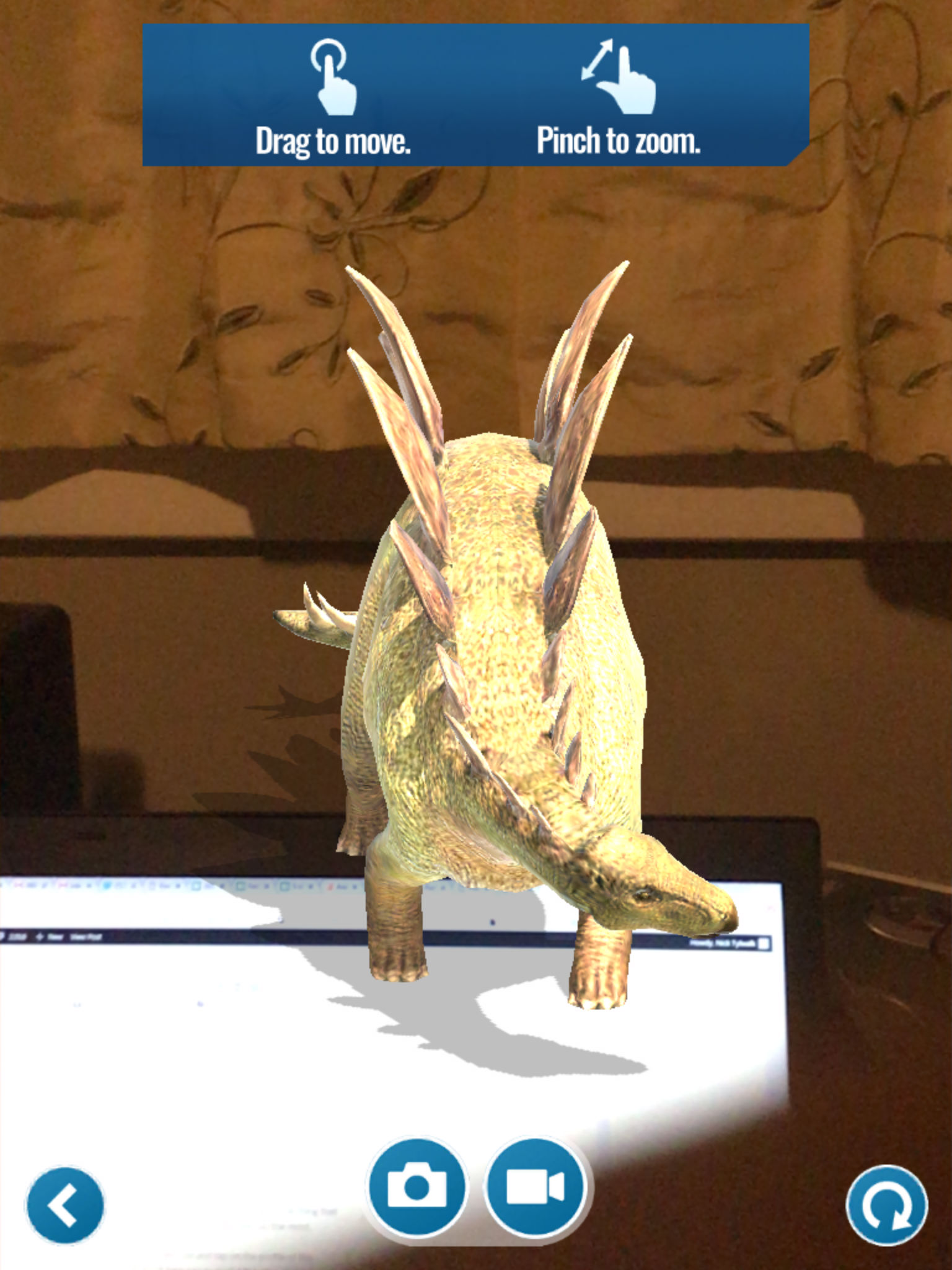 Once placed, the dinosaur can be moved by dragging or re-sized by pinching, but his incredible bloodlust cannot ever be sated. Just kidding, wanted to see if you were still paying attention. You’ll have the option to take a pic or capture video of the dinosaur with buttons at the bottom of the screen, and you can leave AR whenever you so choose by tapping on the arrow button in the lower-left corner.

Collecting dinosaurs is great, and if that’s all you want out of Jurassic World Alive, that’s certainly a very viable option. However, there’s something that appeals to the inner 7-year-old in all of us when it comes to seeing them bash and tear into each other, and the game lets you do that with turn-based battles in the boringly but appropriately named Battle mode.

Here’s how it works: While you can enter Battle mode as soon as you have four dinosaurs at your disposal, you can actually select up to eight to be on your team. Perhaps obviously, you can find the ones on your current team by going to the ‘Collection’ tab and then checking out the ones under ‘My Team.’ You can also change those dinosaurs; just tap the ‘Modify’ button, tap on a dinosaur you want to change out and then tap on another one in ‘My Collection’ to take its place. 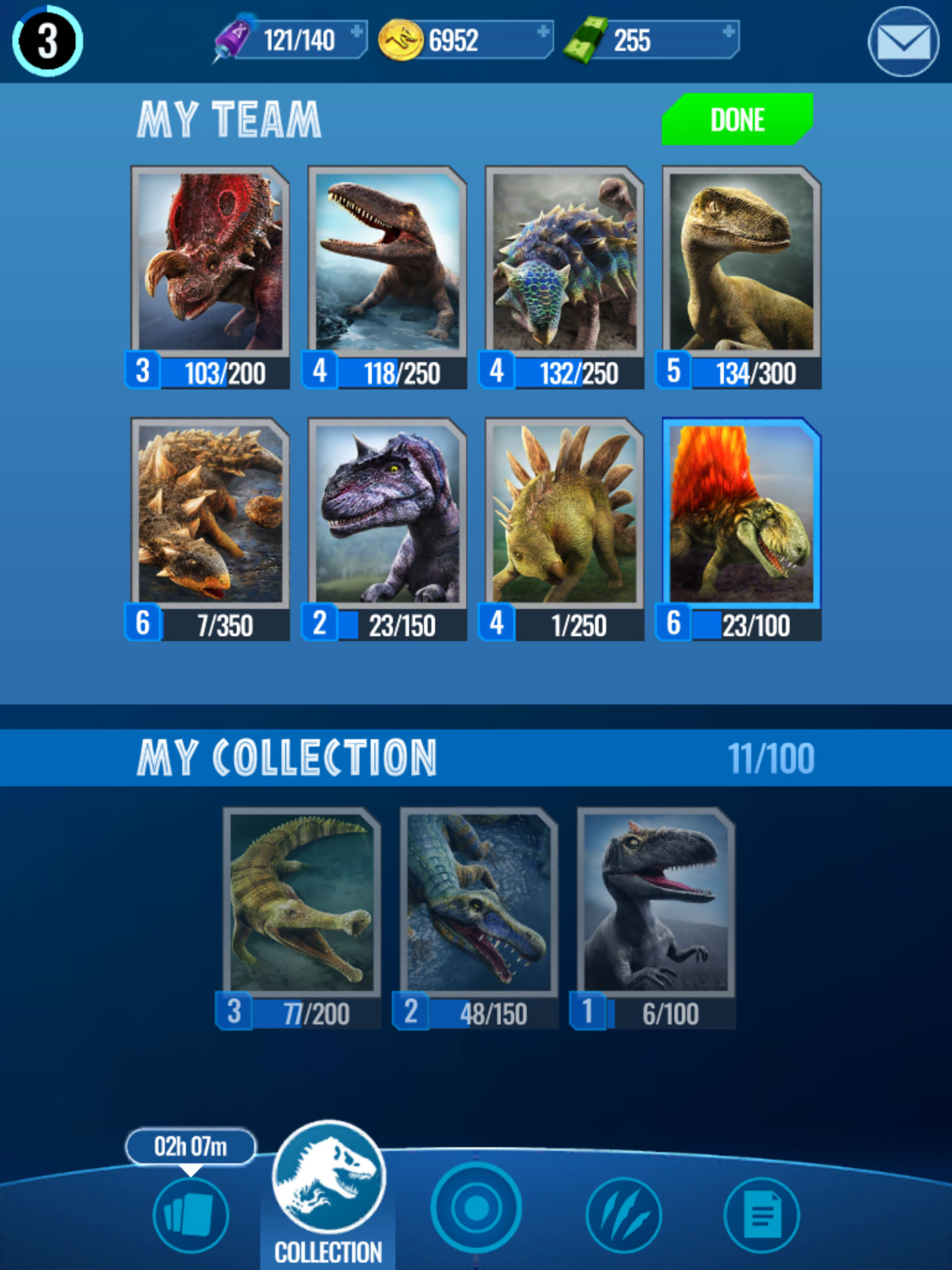 The PvP takes place on a ladder system similar to many other mobile games. It matches you with an opponent on a similar part of the leaderboard, giving you trophies if you win and subtracting some from your total for every loss. Why do you want to climb the leaderboard? Well, each new tier not only introduces a new environment in which to fight, it also brings increased victory rewards and dinosaurs you can only get by playing and advancing in PvP. Also, you know, for your self-esteem. After each victory, you’ll also receive a special incubator with DNA and coins. There are four slots for these, but you can only have one on a timer to open at once unless you choose to pay Cash and skip the whole miserable waiting process.

The actual combat is turn-based RPG goodness as you like it, though very simple. Four dinos from your team of eight are chosen at random to compete against a team of four from another player. The object is to knock out three of their dinosaurs before you lose three of your own. On each turn, you’ll be able to choose from two or more attacks and abilities while the enemy dinosaur does the same. The faster dinosaur always goes first (though there are abilities that can change this), so speed is a very important dinosaur stat. In any case, your only choices on each turn are to pick an ability or swap your active dinosaur for one on your bench. Doing that can buy you some time and avoid a KO, but a swap means your opponent gets a free attack on you, so it’s something you should only do in an very unfavorable matchup or when it’s desperation time. 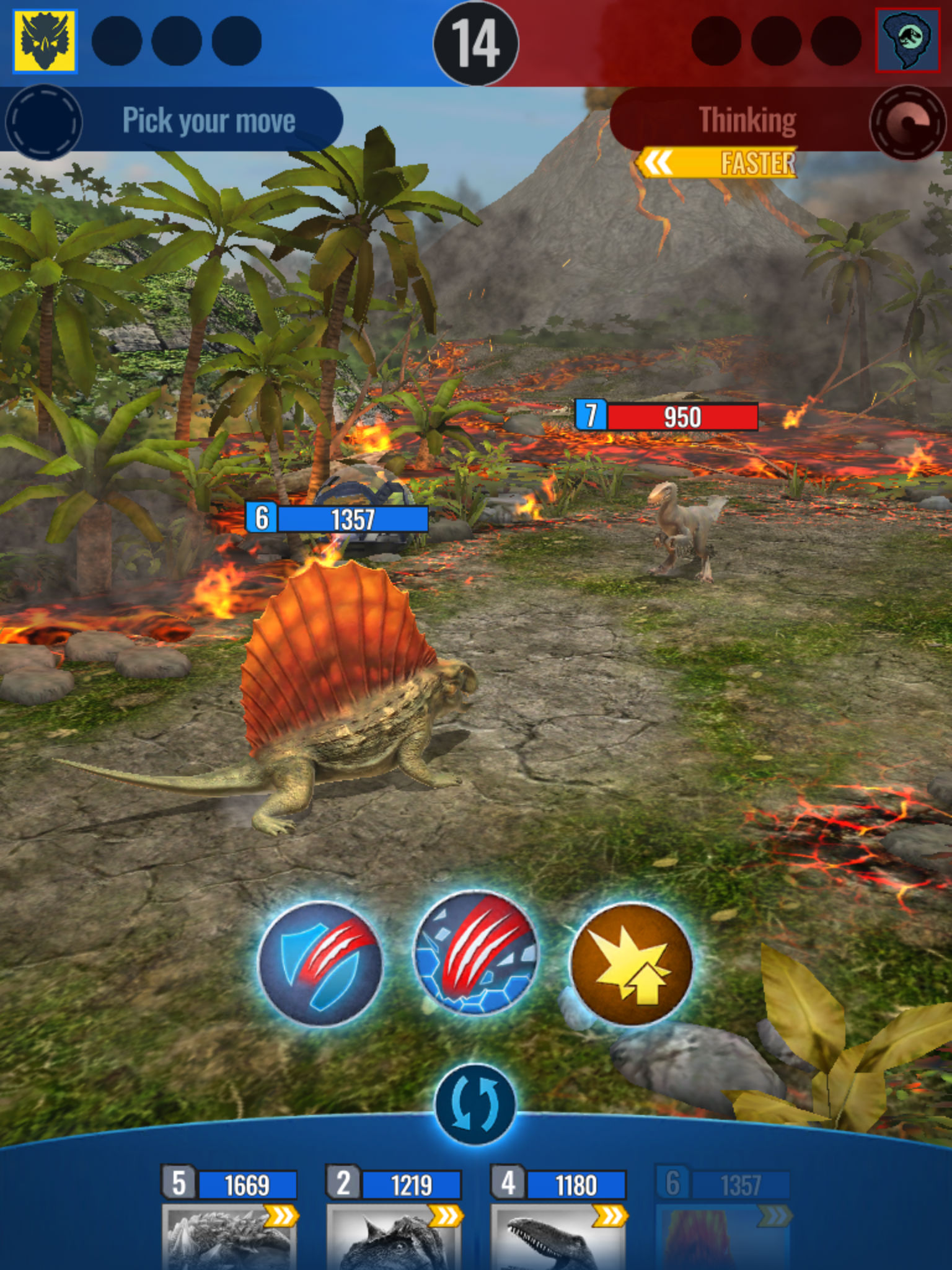 Since every dinosaur has its own stats and set of abilities, it’s beyond the scope of this guide to dive too deep into team composition. Still, it’s possible to separate the dinosaurs into some basic groups and tell you that ideally, you’ll want a mix of these types:

How to make hybrid dinosaurs

Jurassic World was pretty emphatic about the idea that tinkering with different combinations of DNA to make dinosaurs that never existed in real life was not smart. Guess what? This is just a game, so mess with nature to your heart’s content.

Hybrid dinosaurs like the indominus rex and stegoceratops are very real in Jurassic World Alive, and you might even be fortunate enough to encounter them in the wild. Failing that, you can create them yourself provided you have the proper ingredients. Namely, you’ll need the correct two source dinos of the right level, coins and some extra DNA for those dinosaurs. 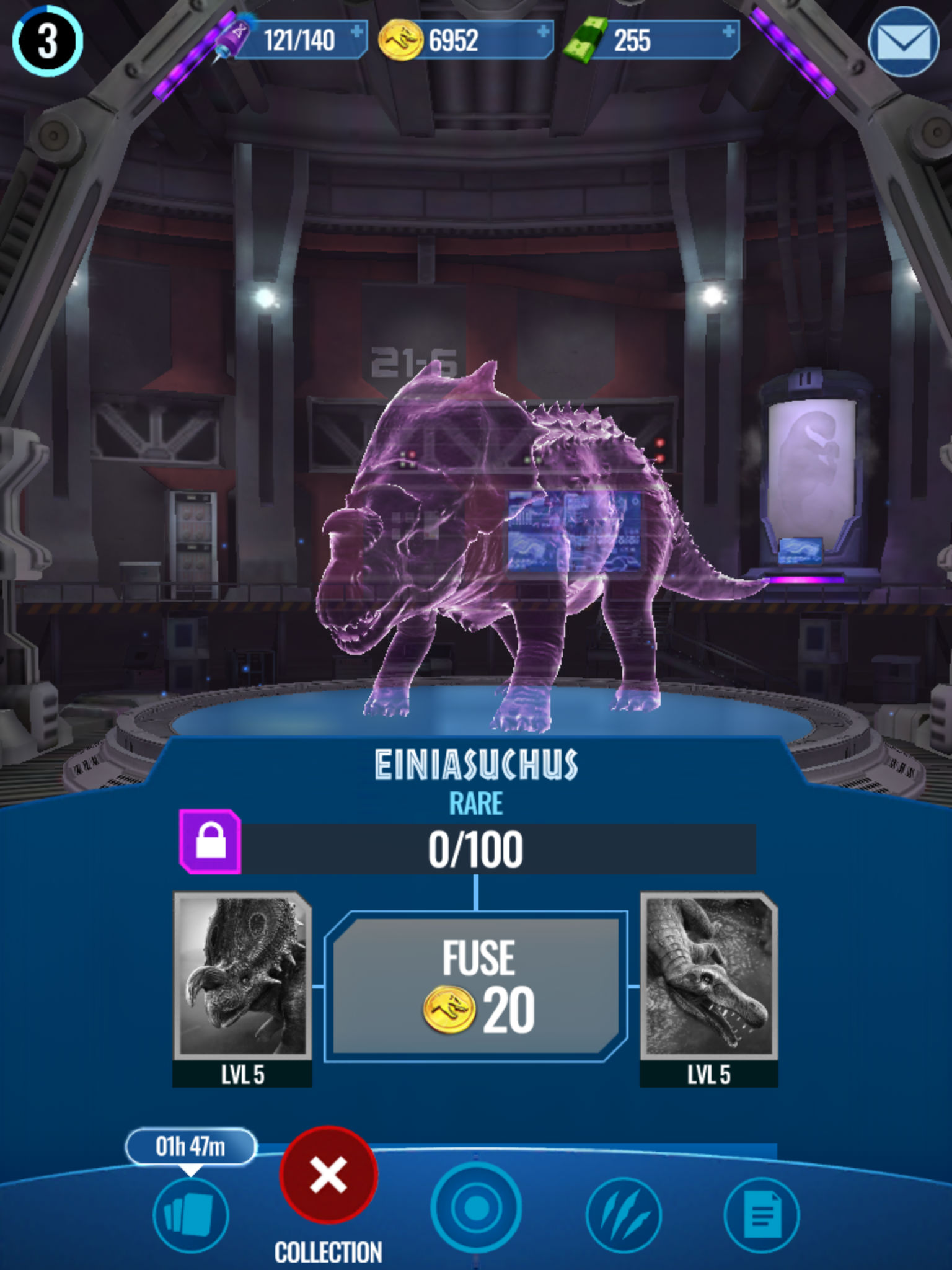 Higher rarity hybrids require higher level source dinosaurs to create, but rare ones like the Einiasuchus only need level 5 “parents." Then all you need to do is go to the hybrid’s profile and tap the ‘Fuse’ button. It will subtract some of your DNA stockpiles for both of the parents and the proper amount of coins, and in return, you’ll receive a random amount of hybrid DNA. Just like any other dinosaur, once you have enough DNA, the hybrid will unlock and be added to your collection.

The coolness factor aside, hybrids have a few things going for them. Since there’s no such thing as a Common hybrid, at least that we’ve discovered, all hybrid dinosaurs start at level 6 at minimum, so they’re useful right away unless you are very high up the PvP ladder. Even better, they generally have some abilities provided by both parents, so you might have as many as four different combat options when using one in battle.