Axe.IO (Free) is one of those frantic multiplayer games with an captivating edge to it that will have you keep coming back for another round. The game has a very charming and colorful art style with simple, yet, tricky gameplay. You will be running around various maps ranging from courtyards to castles and swinging an axe at other players or a dragon (yes you heard that right there is a co-op mode where you take on dragons). When you miss, you have to frantically grab your ax that you dropped or find a new one to pick up.

After a while you will be able to upgrade your skill set or level up throughout levels to hold more than one axe. However, that won’t be for a while. There is also a dodge or roll button to avoid incoming strikes from enemies. It comes in handy when many enemies on-screen are throwing axes all over the place or you are being chased down by a particular character that wants you dead. 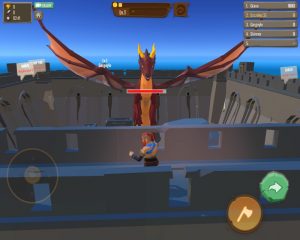 That is just the gist of the gameplay, but it gets a bit deeper. you also can earn shields as you pick them up and level up throughout the levels by picking coins up. These shields will protect your warrior for one hit. Then, to top it off, there is a sword you can earn as you level up in-game and can slice those around you if you run out of axes.

In terms of the way this game is structured, it is free to play and offers IAPs, but they are unobtrusive. The game allows you to purchase diamonds than can be used for a variety of tasks in game: from purchasing additional characters to reviving your fallen her faster. Keep in mind that there are many different characters for you to play or win here, with some of the top ones costing a whopping 30,000 diamonds, which in real-world prices will set you back more than $30. 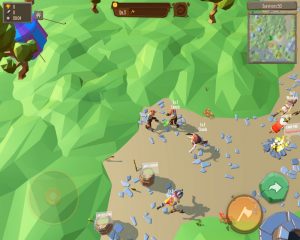 What sets the game apart from other similar mobile offerings is it has a nice and varied set of maps as well as game modes. There is the previously-mentioned co op mode that has you teaming up with friends or players online to slay dragons. That mode is called Dragon Hunter and it is your basic team game where you team up to take on a colosal foe with a lot of firepower and hit points. Each time you die you can respawn, so the mode isn’t incredibly challenging or engaging as some of the others. There is also the classic deathmatch and even a last-man standing mode.

The last-man standing mode is the most competitive what I’ve seen thus far and highly challenging because each death brings all the levels you accumulated and perks/weapons to zero — as you will have to start a new game all over again. This mode is called Battleground and you will be fighting with 50 other players online to remain the last alive on the battlefield. 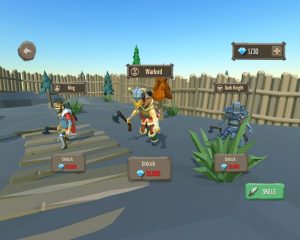 Despite being a frantic and fun multiplayer outing, I still have some gripes with the gameplay. For one, it would be nice to communicate with other players online somehow, even if just by a touchscreen keyboard. Another thing is that once a match is over, you can’t just wait till everyone is done and continue playing with the same set of players. Instead, you will have to go onto another match. It would also be nice if Crescent Moon Games lowered the barriers of entry a bit in terms of earning new characters and skills.

However, I have not seen anyone using the expensive characters such as King or Warlord yet, as I have been having fun just earning my way to the top. There is a certain accomplishment in earning new characters as I play. I would call the premium characters fun, but not necessary additions. Some of the characters are also unavailable by purchase and you will need to complete tasks within the game to earn them, such as surviving 300 seconds without dying in a single match.

One thing that keeps the game from true greatness is that it gets very repetitive. This is particularly in the beginning where you only have one character and axe to throw and no sword yet. However, as you engage the match and level up (hard to do in the last-man standing mode) you will see additional perks and (sword or multiple axes) weapons available. Also, as you keep playing you will earn additional characters. So, there is definite incentive to keep going. However, you still have to fight that repetition and hopefully Crescent Moon Games will keep supporting the game with updates to keep things fresh.