If you are an avid gamer on mobile and follow the scene, you may know that retro-style pixel art has been the rave the last couple of years. Many great games offer graphics from a bygone era, but redone with a magic digital touch to bring these aesthetics to modern play controls and structures in gaming. Crescent Moon Games’ Reed ($1.99) is a game that fits this mold. It is a platformer that will keep you hooked for its art style alone, but one that will also scratch that hardcore itch. Reed is a platformer that relies on double jumps and quick wits to navigate the game’s 50 levels. The levels are generally very short and it shouldn’t take you more than a couple hours to complete the game if you are a skilled platform player. However, let’s get to the game’s weird, but captivating, storyline first. 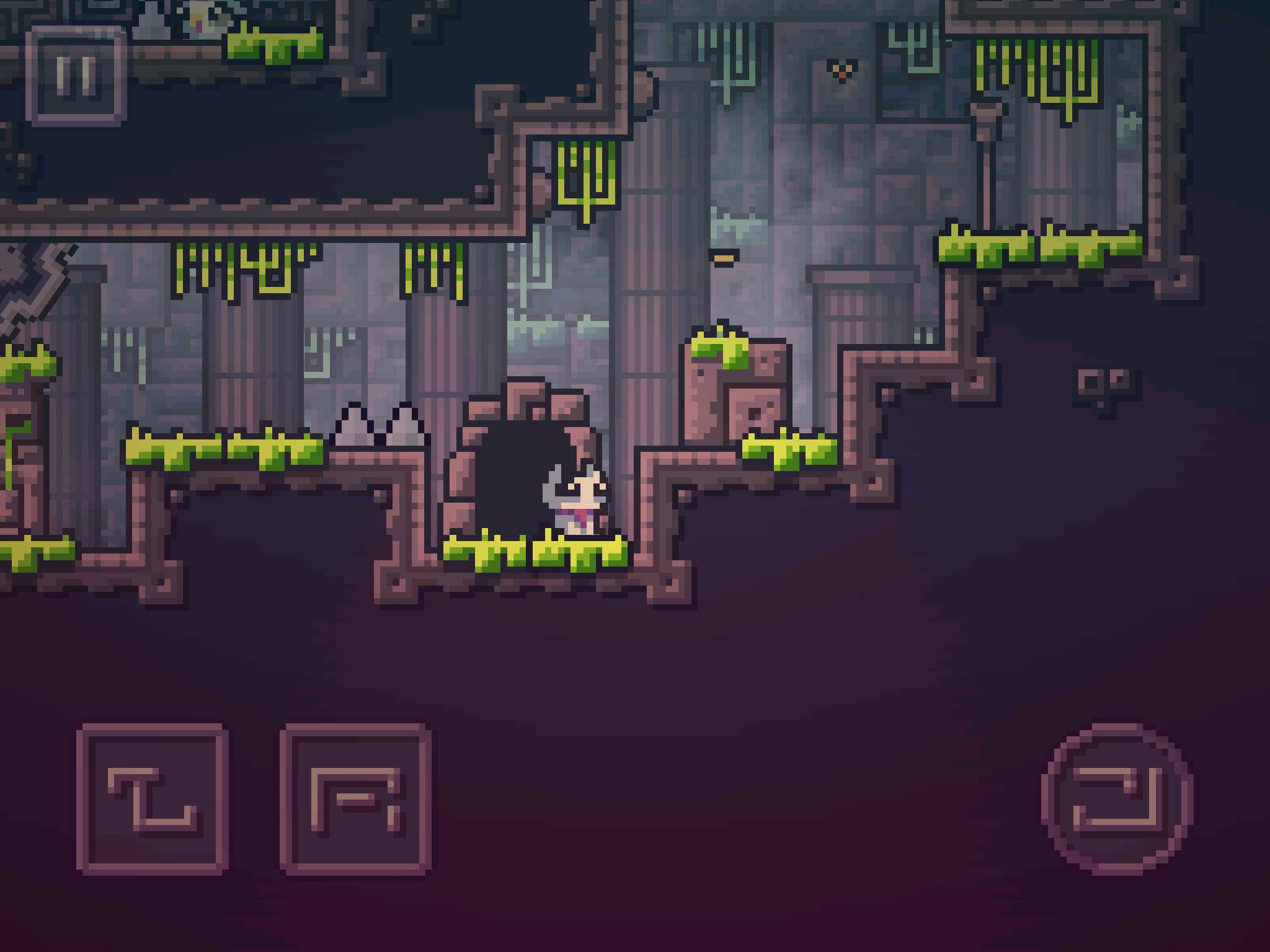 To be honest, Reed doesn’t have much of a story to begin with, but what it does have is pretty interesting. In the first level you are being introduced to your feline character that happens upon a world full of AI and computer systems going berzerk. You or your feline character will be saving this world gone tech-mad. A lot of the dialogue is also filled with symbolism or shown through the use of symbols. Basically, you have to collect cubes to help an aging computer keep functioning. So there is that.

The gameplay consists of navigating a tunnel- or cave-like system of levels with a muddish color palette, but a lot of cool pixel art and visual effects to boot. You will be jumping over spikes onto moving platforms, as well as dodging weird-looking chicken-head enemies and flying darts to name just some of the game’s obstacles. The nice thing about this is the game offers a double jump. The double jump will come in handy as the feline character cannot jump very high to begin with. 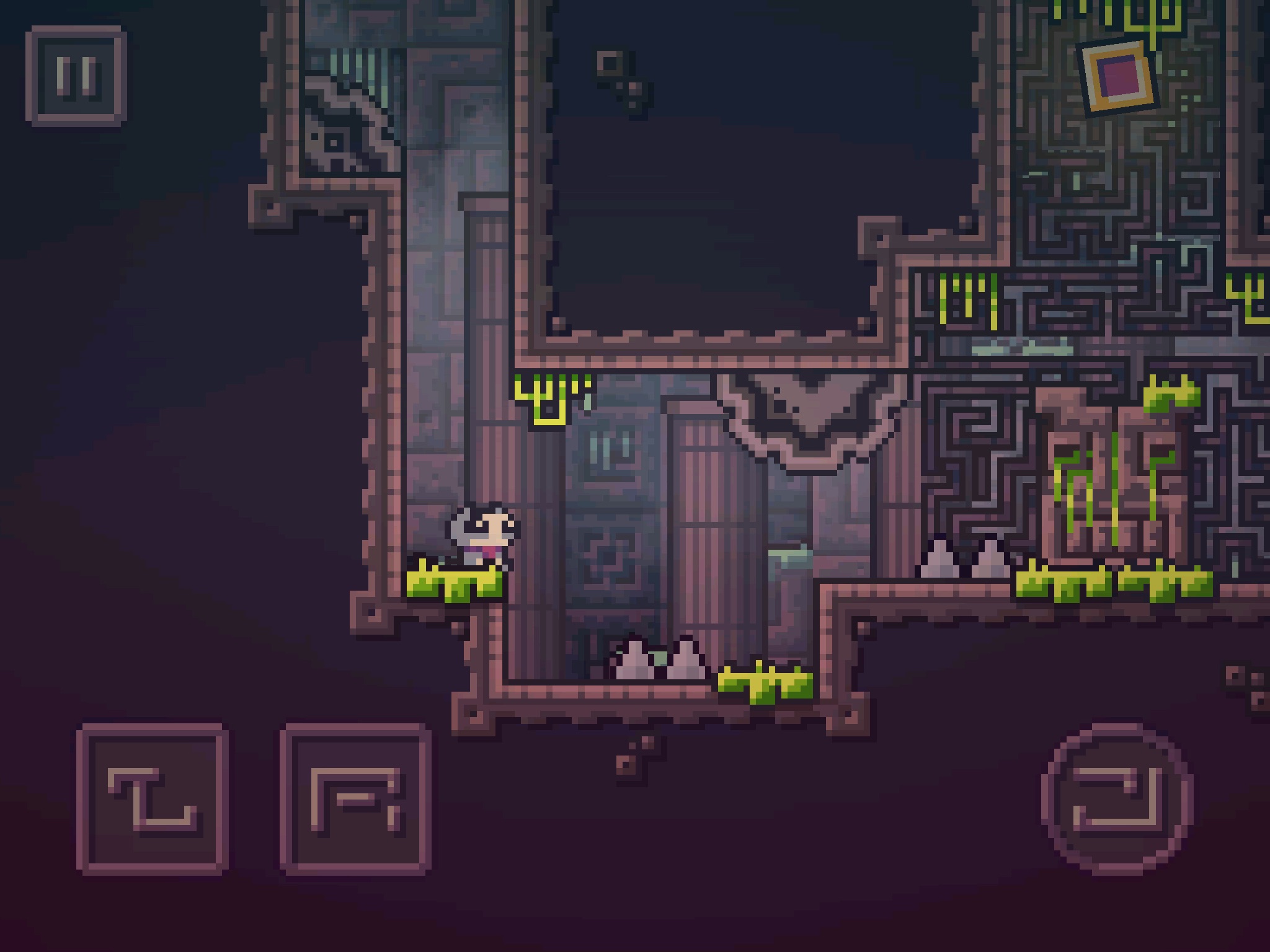 Do note that Reed doesn’t offer a lot of maneuverability in terms of movement and control in mid-air. However, there is a weird sense of mastery still involved in terms of skill involved to complete obstacles. Sure, you cannot really manuever about in mid air to jump over obstacles, like in other platformers. But, you still have to time that double jump perfectly to overcome the many spikes scattered around the ground or a moving enemy coming toward you.

There are only three buttons in this game: move left, move right and jump. However, this is all you need for a basic platformer such as this and it works well on touchscreen. What really separates this game from the many platformers on the App Store are the visuals. You will see small butterflies flying around the levels and nice lighting effects making certain parts of the cave-like levels light up. Also, the weight of your feline character feels organic as when you jump the screen shifts or tilts a bit.

You will be hitting or running into these weird-looking rotating cubes, previously-mentioned as helping an aging computer keep functioning, to open up the doorway to the stage’s exit. These cubes are placed usually in the opposite side of the level from the exit door and will need some navigation and platforming to get to. Once you hit one of these cubes and the doorway opens to the exit, you will be taken to the level structure menu where you can go on to the next level.

There are again 50 levels in total and the game is really on the short side. It gets very addicting however, as the levels are just pretty cool to look at with colors popping about on-screen. If you are in the mood for a new mobile platformer with some gorgeous pixel art to boot, you can do a lot worse than Reed. I ended up completing all of the game’s levels wanting more. Hopefully, a sequel or an update will make this happen, but otherwise this is still a solid platformer worth checking out.