If you’re looking for a Metroidvania on mobile, and want a terrible translation to go along with it, Dungeon X Dungeon ($2.99) is the game for you. This game first popped up on Android last year, stunning with its pixel art, before getting release on iOS this year. The game throws in a variety of weapons and abilities for the player to use in their quest to escape the massive dungeon they’re trapped in, but some clunky controls and a bad translation that leads to confusion make this a mixed bag of an experience.

Watch Dungeon X Dungeon with Carter from TouchArcade on www.twitch.tv

You play as Luke, a treasure hunter thrown into the dungeon by an evil pope. There’s something about an ancient evil in the dungeon that will be awoken, so you have to escape and also possibly deal with that stuff. Meanwhile, a couple of allies come and go, and will either help you on your way, or get stuck and then you have to help them. They “why" of this is all so confused because Dungeon X Dungeon has a terrible English language translation. While this sometimes leads to comical moments where the tone is perhaps rougher than intended, as the protagonist just delivers absolutely stunning burns to his allies for their faults.

The problem is that the bad translation makes the story incoherent and leads to issues with some items. I couldn’t tell you what they do, and why you should equip them. Even the moon system is described in confusing text to where you can’t understand it right away. It makes the enemies stronger on the full moon, but also increases your critical attack chances. Why does it exist beyond the developer thinking it was good to include? I don’t know! 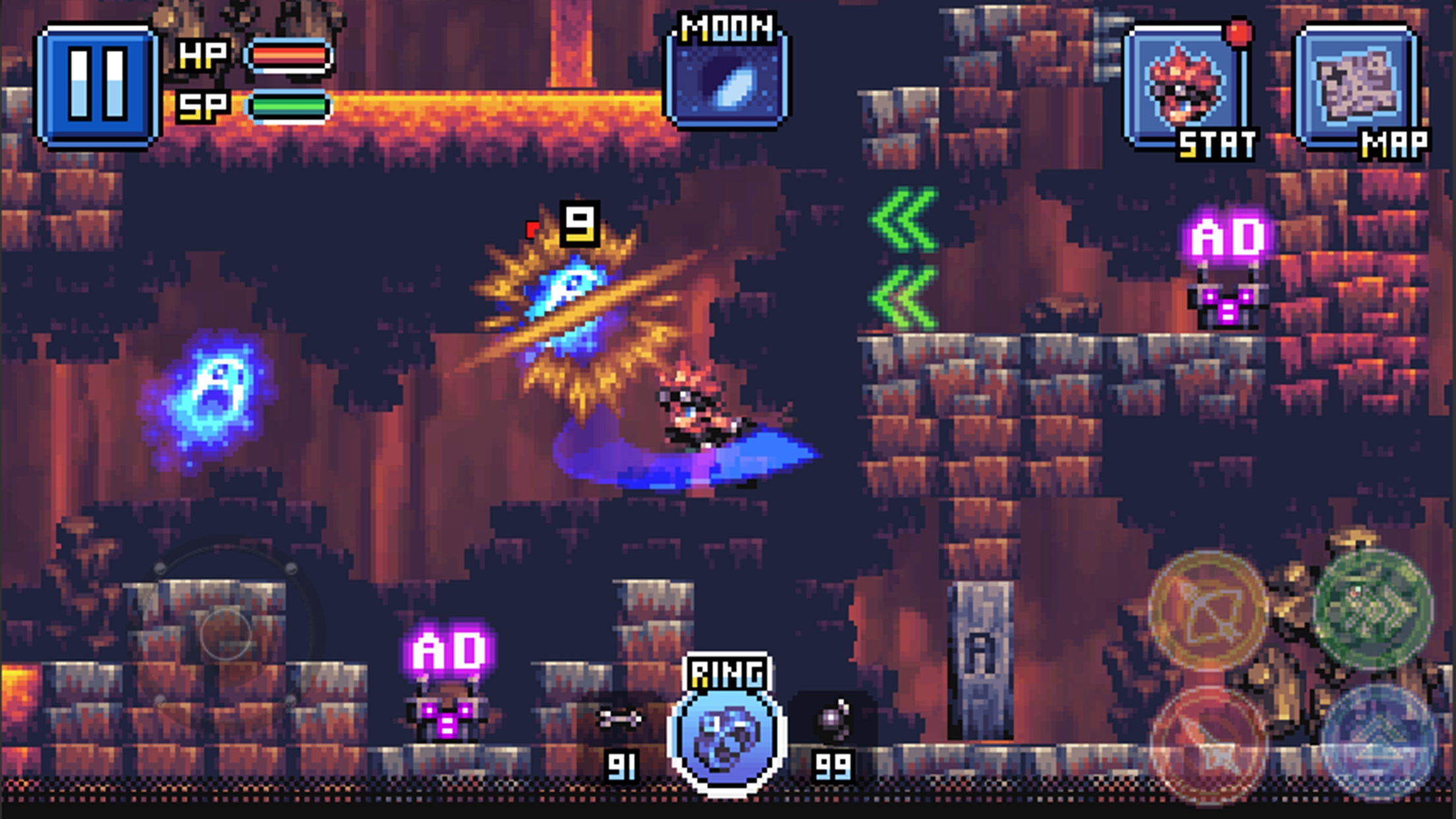 Dungeon X Dungeon gives you some acrobatic abilities to play with over time, as you get a double jump, but also a clunky wall jump. You can only use the wall jump if you’ve jumped once, and you have a split-second to jump off of the wall to the other side, and you have to purposely hold in the direction you’re clinging to ensure the game recognizes that you’re holding onto the wall.

You’ll want to use the individual directional buttons, and not just the virtual joystick, in particular when you get an ability that charges by holding the down direction. MFi controls are sadly lacking, too. The virtual buttons work pretty well, though, and you can rearrange and resize all of the controls. The buttons are kind of huge on the iPad by default, but I had few issues with mis-hitting any button despite having four different actions. 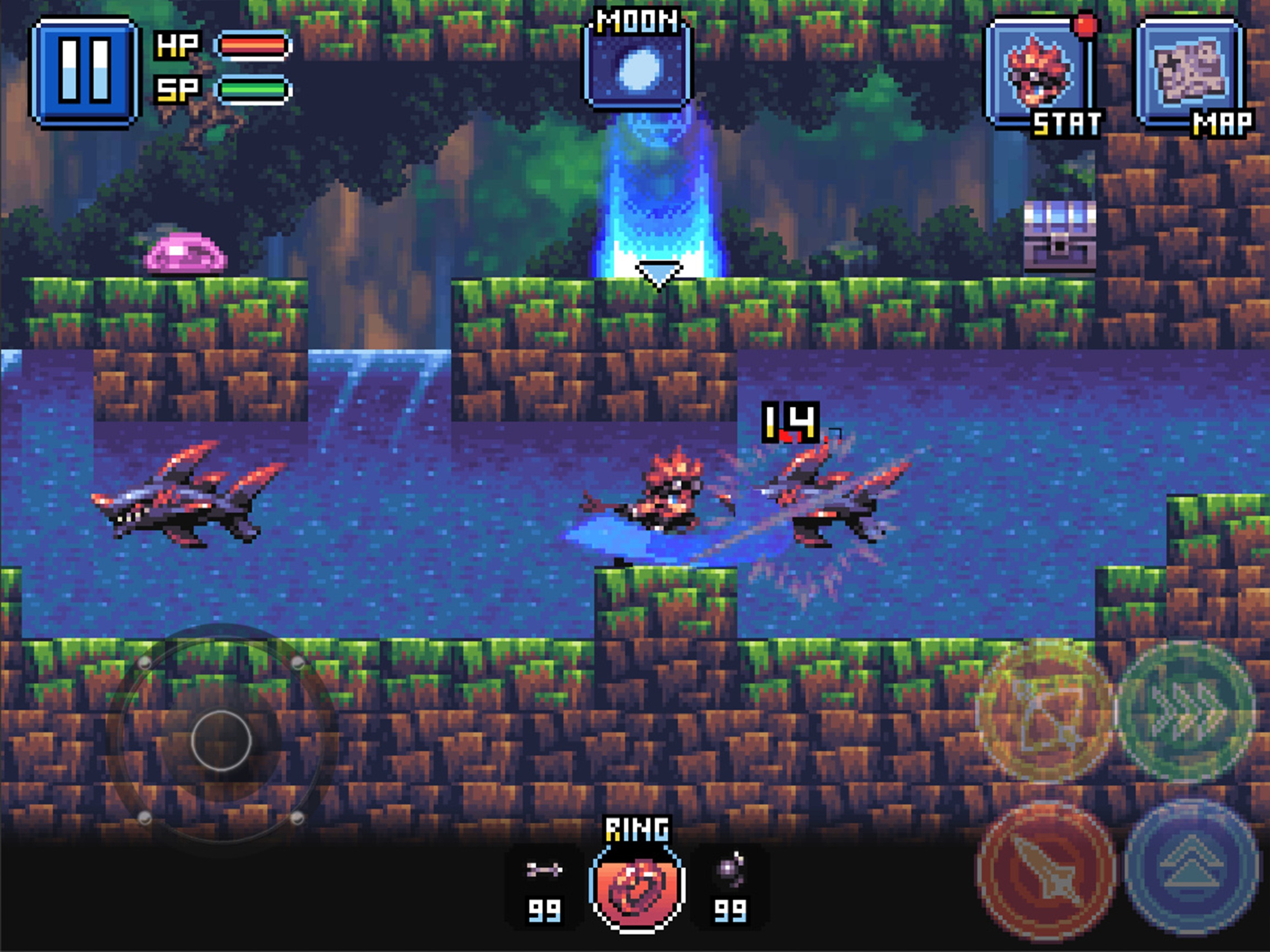 The boss fights are certainly questionably-designed. You can defeat the first boss by sitting back and firing arrows until he is dead. another boss can be easily whipped to death. Some worlds just skip the boss altogether. Good call! The game’s difficulty as a whole is uneven by design due to the moon system in play, as enemies will occasionally do massive amounts of damage, and other times, their hits will bounce off of you like nothing. I don’t understand why the moon system exists in the first place. Perhaps this is explained in the story, but between the rough translation and the propensity for text to skip too far forward, I’m sure there’s some reason. Not that it really matters, it just means to be careful when the moon is full.

The system where you can only equip one particular item at a time probably shouldn’t exist, because there’s no real point to it. I didn’t notice any items canceling each other out, and some items stay permanently equipped! Is there any reason I can’t have a fire extinguisher and the ability to go through electric fields enabled simultaneously? I think not! It’s just a slightly annoying thing, but it was certainly a questionable decision. 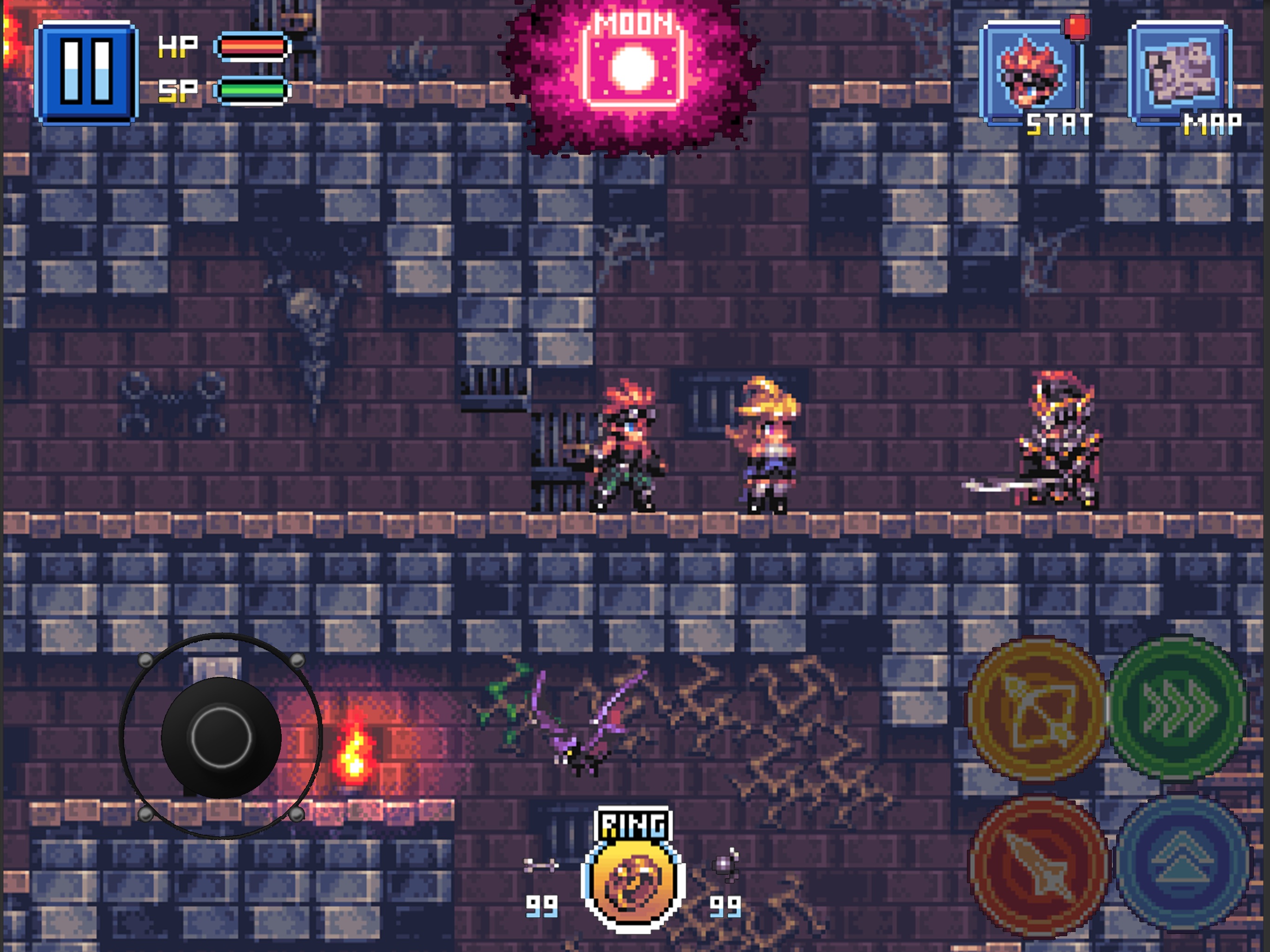 The thing is, despite the many flaws of the game, it’s still a pretty enjoyable time. Perhaps this is just because of the strength of the Metroidvania genre itself, where finding new upgrades and retracing your steps to overcome previously-inaccessible sections is just a fun thing to do. The game’s stance on backtracking is kind of iffy, as some areas get closed off but others let you properly backtrack. So, make sure that you get all of the red chests (and blue chests, containing crystals for upgrading items) before you move on, because you might not get a chance again. Many of them contain optional upgrades, like new weapons, or armor, but new items often are more efficient in their upgrades. For example, the axe you get gains more damage with each upgrade than your starting sword, and then the whip you find later on gets more power with each upgrade, not to mention that it can do multiple hits in its combo attack, and be utter cheese against bosses.

I think it all goes to show that why Metroidvanias are so popular: even if the implementation is sloppy as it is in Dungeon X Dungeon, the game can still be good. And, I can critique virtually everything here, and if you’re a scholar of game design you likely will find more nits to pick. But if you just go with the flow, you’ll likely have fun, especially since a great mobile Metroidvania doesn’t come along all that often. The pixel art in the game is great, with a colorful theme that is never dull, and low-resolution pixels that are chunky but detailed. It’s the strongest aspect of the game, and it shows that the developer really put a lot of time and care into this portion of the experience.

I definitely hand down a mixed recommendation for Dungeon X Dungeon. It’s got a lot of flaws, but I don’t think any of them are deal breakers. it’s like driving a car that has a bunch of small problems with it but gets you where you need to go with good gas mileage. If this game intrigues you, please don’t let all the small issues get in the way, as you’ll likely have a good time regardless!