Combine Minecraft ($6.99) and Clash of Clans (Free), and what do you get? Craft Warriors! (Free) Ok, so it’s far more like Clash of Clans than it is Minecraft, other than its pixel art style visuals, but it does make a pleasant change from the cartoon style nature of Clash of Clans and its many clones.

A hit on the App Store, you don’t want it to be a hit on your wallet. We’re on hand to give you some handy advice and tips on how to avoid spending money on Craft Warriors, while still getting ahead.

Like many base building games, you’re limited in terms of how many structures and upgrades you can build at a time. Early on in the game, you’re given an extra builder giving you two builders and one blacksmith. Keep them all as busy as possible.

Blacksmiths are used to upgrade your troops which, obviously, you want to do if you want to stand a chance in battle further down the line. Keep them upgrading a unit at all times. You’ll thank me later.

It’s a similar case for builders. Particularly early on, you’ll want to focus on rebuilding the damaged defensive walls around you. Each only takes about 10 seconds to finish so you need to check in regularly and keep on top of them.

You can’t physically move your base so it’s important that you keep the surrounding walls upgraded. Similarly, you can’t add extra walls so the ones that are already there need to be tough.

Leave the longer upgrades for when you’re going offline for a bit longer. That way, you’ll be completing building most efficiently.

All buildings have a fairly significant purpose. For instance, while storage facilities might seem dull, an upgraded one means you can store more gold and blue gems (mythril) which goes on to helping you upgrade other sturdier units. It’s all a circle of productivity that you should keep on top of.

Eventually, you’ll end up producing more mythril and gold than you can store (unless you log in a lot), but it pays to keep the edge off things. Especially early on, when every cent counts. 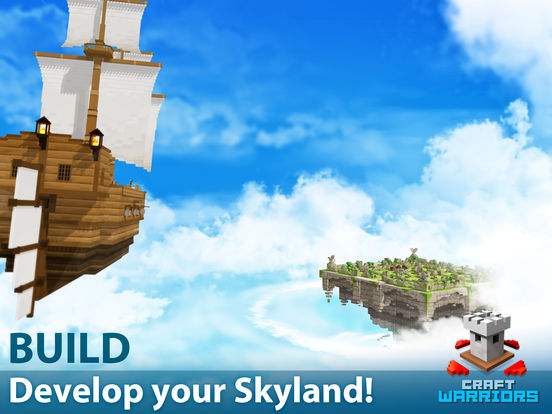 Consider placing different storage facilities spread out around your base. That way it’ll take your enemy more time to get from one point to the next, possibly making all the difference in a tightly fought battle. Remember – you’re up against the clock as well as your opponent here.

One easy to overlook structure that is useful to upgrade is the Airship. This dictates how many times you can attack an enemy so you want to make sure there are plenty of chances to do this. Attacking enemies is a great way of earning experience and gaining lots of bonuses. It also boosts how many units you can send into battle which is a big advantage.

Focus on upgrading the castle base whenever possible. This won’t always be possible as it relates to your player level. When a chance arises though, go for it and keep things topped up. The castle takes a long time to upgrade, but with it comes extra upgrade opportunities for the other buildings within your base.

Before each battle, you’re able to choose who to attack. Go for someone with as low a level as you can find, that also happens to store a lot of resources. That’s the sweet spot for maximum rewards.

Before you place your first unit, take the time to scout out the area. Check out where the resources are, as well as what’s between you and the base. It’s not overly complicated as each arena is very small, but it’s worth seeing what you’re up against.

Your control options are fairly limited in Craft Warriors so where you place your units at the start is important. Place them near gun turrets first so that they can destroy them before taking out the passive buildings around them. There’s no point chipping away at a storage facility while being attacked by a turret behind you.

Bear in mind – resource gains are more valuable to you than gaining the full three stars/trophies for winning a battle. Consider that when it comes to key placement.

Throw all the units possible at your enemy. When it refreshes, carry on and keep going. You can always place them somewhere else so that your enemy is having to deal with attacks on multiple fronts.

Keep things fairly balanced with what units you upgrade. They all serve a handy purpose. It’s pretty easy to level them up, providing you’re patient and are consistently earning currency. So just keep at boosting them whenever possible and don’t worry about overthinking it. Craft Warriors isn’t that complex a game. 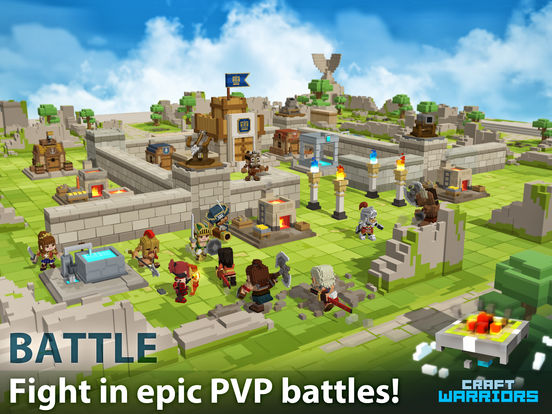 Don’t upgrade your units right before going into battle. Any unit currently being upgraded can’t be used during a skirmish. Stick to upgrades when you’re done with fighting for a bit.

Tackle the rewards and achievements section available to you. Craft Warriors is really clearcut on what you can do to get free bonuses. Logging in every day rewards you with increasing returns from red gems to mythril and thousands of coins. It takes you seconds to do, so you might as well check in to maintain your streak.

Alongside that, there’s a separate log in bonus that throws a few red gems your way. The minimum amount is 3 with that total increasing to 7 after a few days. Pick those up while you’re at it.

Daily missions are also available, usually tied into completing a few battles while you’re there. If your day is super busy, you might not have the time but it’s worth turning it into a habit. You gain an easy chest this way.

Alternatively, other missions are also clearly laid out. They often relate to things you’ll be doing anyway, like logging in often or building new structures. Check out the list and give them a shot. Early on, you might as well do things like customize your profile icon and change your emblem. You’ll gain a few easy gems that way for minimal effort. There’s always the option to watch a video for an extra couple too. 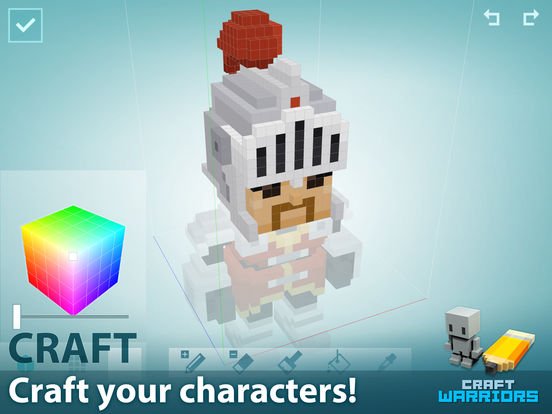 This might all sound like gems are liberally dished out, but that doesn’t mean you want to go nuts with spending them. Save them for buying new builders or an extra blacksmith. That’s where the smart money goes – not on speeding up current production. Just be patient while waiting for units and buildings to finish being upgraded.

Ok, this doesn’t have much to do with saving money but it is a fun side bonus to Craft Warriors. Almost Minecraftian, you can customize your units, as well as your flag and various other parts of the game. Don’t overlook it. It’s sorta fun and you can earn some easy gems for completing achievements relating to customization.

Go to the Units tab and hit the pencil icon on your unit to begin editing. If you delve into the market, you can import skins from other players which can be pretty cool. It’s a small touch but it’s an important one for making Craft Warriors seem a little more distinctive than the other base building games already out there.