Followers of our podcast likely noticed a lot of ultra-mysterious mentions surrounding a trip I was taking to Japan that I couldn’t talk about beyond I was going to be away from the site for a while. The reason for all that was a trip to Platinum Games in Osaka where I was able to go hands on with Platinum Games’ upcoming mobile action game, World of Demons, which is being published by DeNA. Platinum Games is ten years old now, and if you’re not familiar with them, they’re responsible for games such as Bayonetta, Nier: Automata, and more. The founding team previously worked on historic titles such as Devil May Cry, Resident Evil, and Okami, so the announcement that Platinum is working on a mobile game comes with loads of attached expectations.

The mission that DeNA and Platinum had was simple: Create the best possible action game on a touch device. During their presentation in Japan and in subsequent interviews, they repeatedly reiterated that not at any point while playing World of Demons do they want people to feel like they aren’t playing a Platinum action game- A lofty goal that I’m supremely curious how the hardcore gamers who typically follow Platinum titles are going to feel when it’s finally in their hands.

In World of Demons you’re in, well, a world of demons believe it or not. In this case, the monsters players will be facing are all based on Japanese Yokai. Learning about the history of the yokai and the surrounding mythology was absolutely fascinating as a westerner who really doesn’t dabble in this sort of thing very often. Basically (and this is a supremely high-level explainer) the yokai are a compilation of creatures from Japanese folktales, with many things that couldn’t really be explained at the time just becoming another yokai. 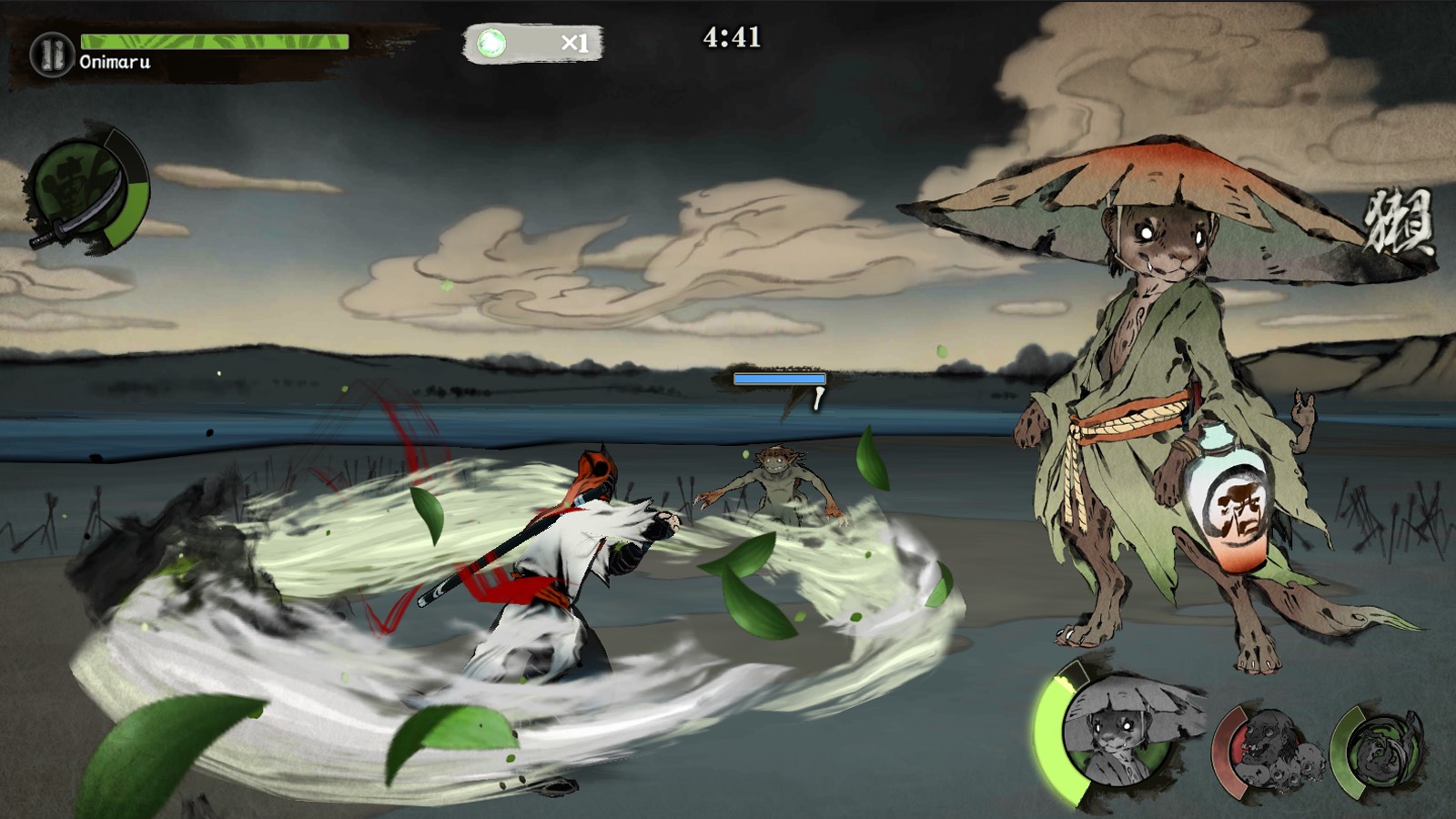 The yokai that might be the most recognizable to Americans is a kappa which is sort of a water goblin kind of thing that tries to pull unsuspecting people into the water. A kappa’s most recognizable trait is the bowl of water that is a part of its head, which is the source of the kappa’s strength when it’s away from a lake or river. Since these yokai are so ancient, an unbelievable amount of additional detail has evolved surrounding each of them from countless stories and all eventually become “canon". For instance, in the case of kappa, they really like cucumbers, and that has turned into a common theme surrounding many things to do with kappas.

After learning about all this, I fell down a massive Wikipedia rabbit hole of reading all about the yokai, with the main page serving as a great starting point, but each individual spirit or creature also seems to have an exhaustively detailed article. The whole world is unbelievably captivating to me, which has opened tons of doors for all sorts of yokai-based games, including but not at all limited to World of Demons. 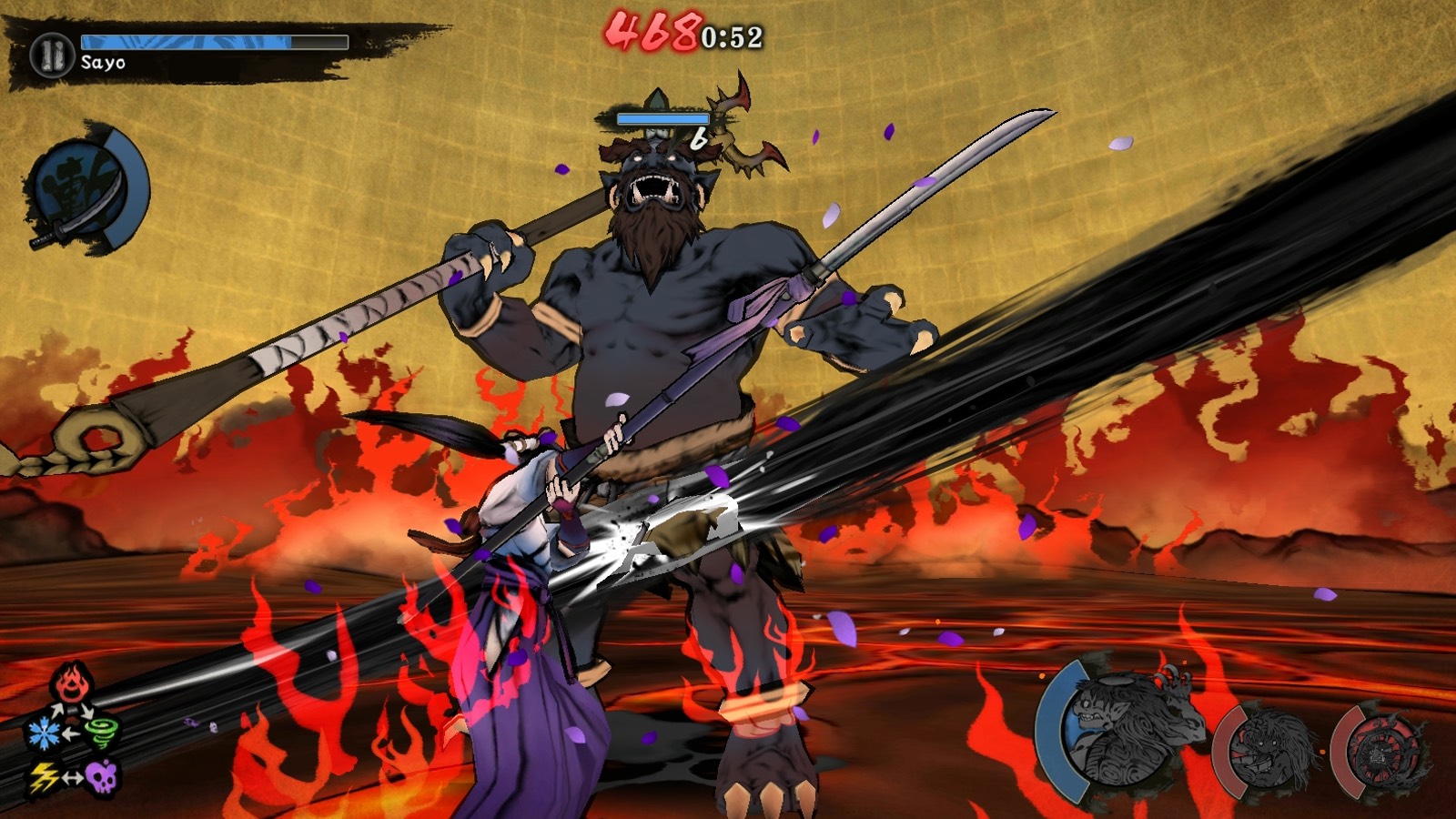 In World of Demons you interact with these yokai in some interesting ways, and some … not so interesting ways which lean on somewhat expected freemium tropes. The game itself is structured based on individual levels. These levels are more or less a large arena area (with wildly varying background imagery and locations) where wave after wave of yokai spawn. Using your left thumb you move your character around, and once you’re in range of an enemy you’ll attack automatically. You avoid damage by swiping to counter attacks, and this reaction-based mechanic is a large part of the skill required to play the game.

As you’re defeating yokai, you’ll eventually capture their spirits. You have three slots to “equip" these spirits and bring them into battle with you. Your yokai spirits are represented by three virtual buttons on the right side of the screen, and tapping them allows you to do elemental based attacks for that yokai’s particular element. Going back to the example earlier with a kappa, since they live in water, they give you a water-based elemental attack. All the other yokai in the game have similar elemental affinities which coincide with their actual mythical origins in real folktales. 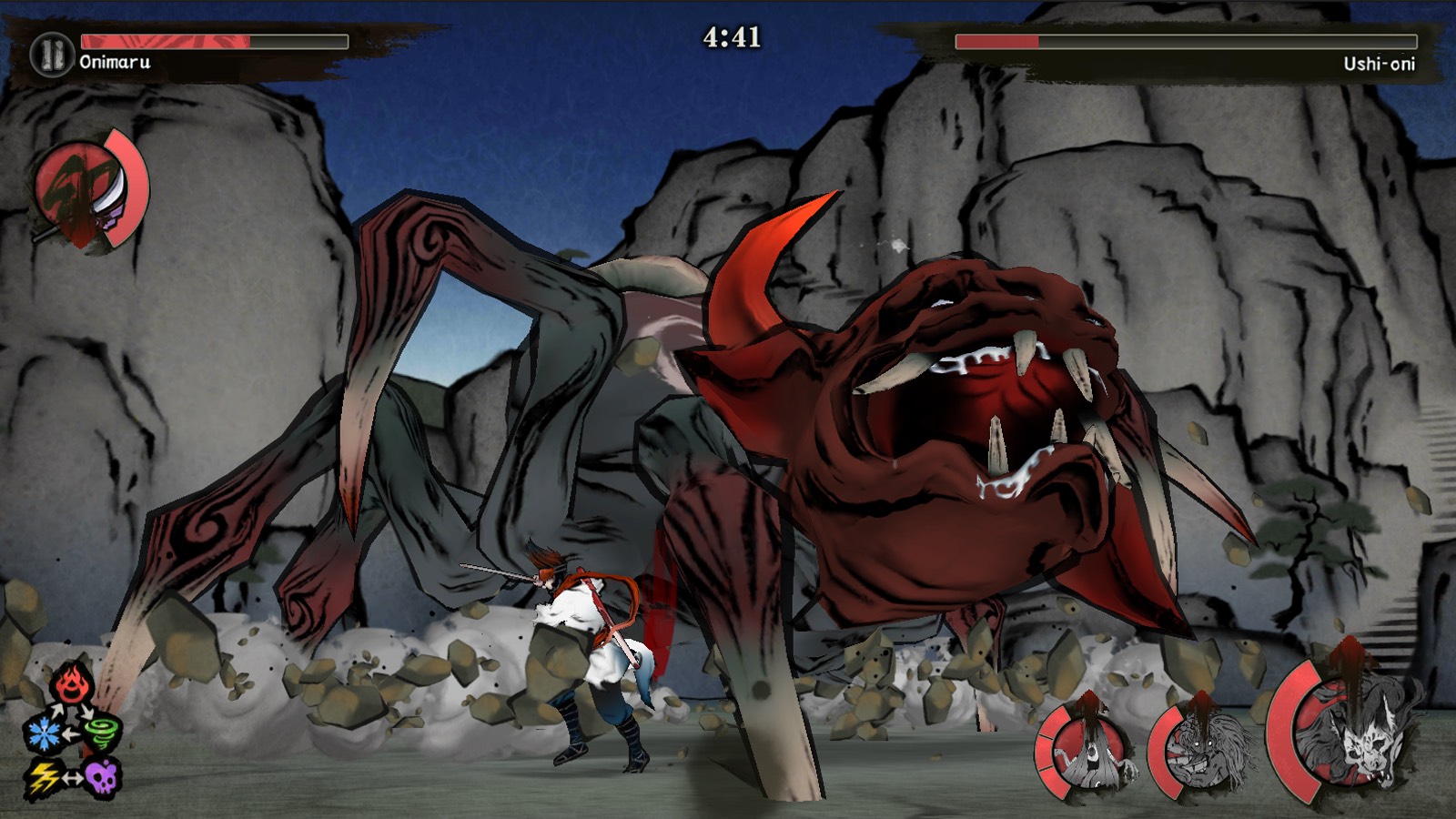 Just like Pokemon and countless other games that have elemental systems, there’s a bit of a rock, paper, scissors thing going on and intelligently using these attacks to exploit the weaknesses of your opponents is critical. Of course, since you only have three slots to bring yokai spirits into battle, you’re never going to have all the elements you need- providing an interesting wrinkle to the whole thing. (Again, not at all unlike Pokemon and which ‘mons you carry around to have a good spread for all damage types.)

Inside of this basic elemental combat system, Platinum is doing all sorts of interesting things including boss battles and multiple different modes where you can even pull in friends of yours to assist in particularly challenging series of timed gauntlets. Of what I was able to play of the demo, the gameplay is super tight, the spirit system is really neat, and there’s even multiple playable characters with different weapons that feel distinctly different. In the demo build, for example, your default character has a typical samurai sword versus another character that is able to keep her distance with a longer-range but slower pole arm. (Think playing TMNT with Leonardo or Donatello.) Apparently, there’s all sorts of other characters to unlock, but they were outside of the scope of what I was able to see. 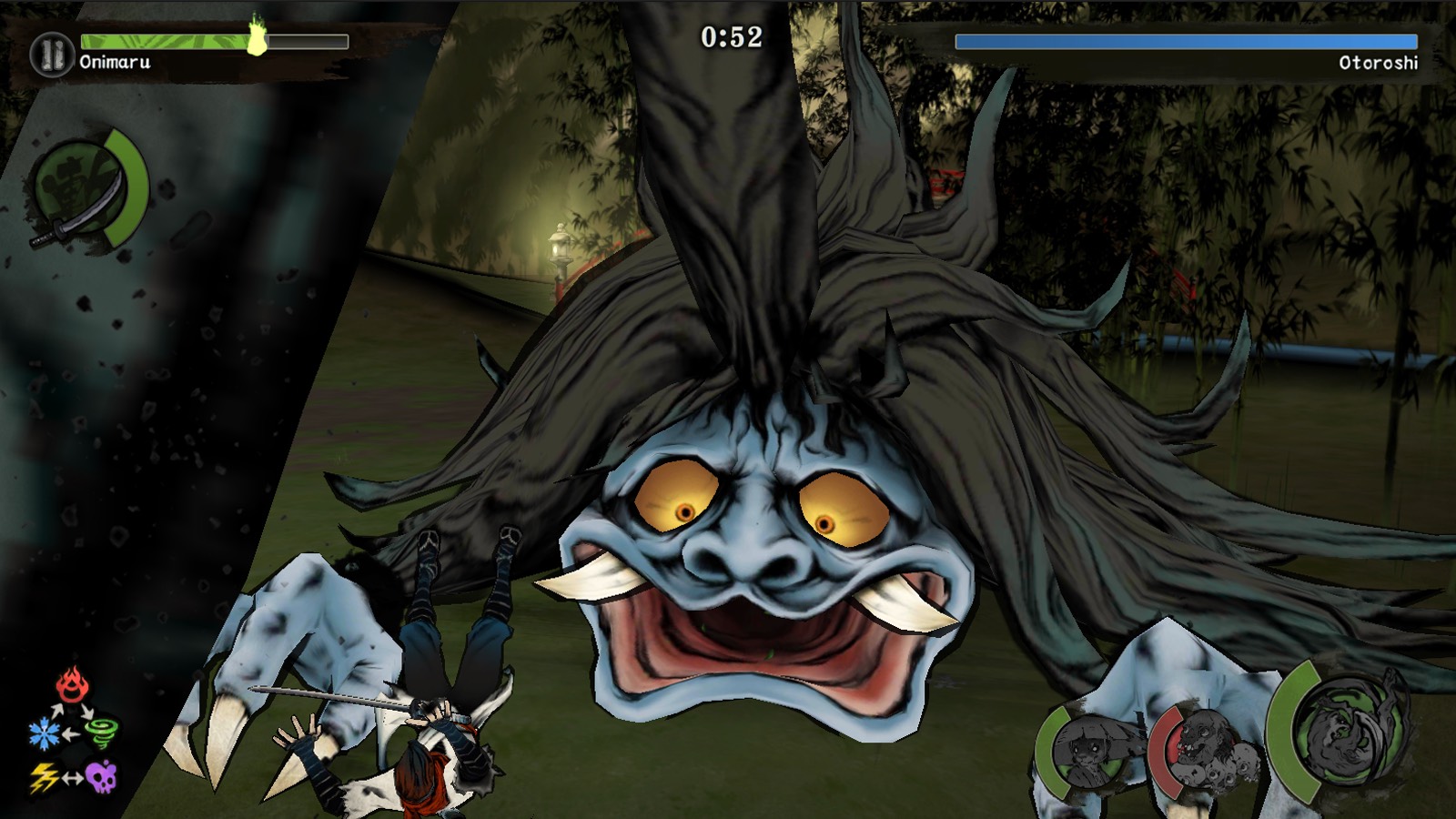 So all that stuff is super cool, and I really think they’re delivering on the goal of uncompromised action on mobile… But being a freemium game, of course they have to turn those monetization screws somewhere. This comes in the somewhat expected form of absolutely everything you have is able to be upgraded, leveled up, or some combination of both. They continually reiterated that nothing is behind a pay wall, but if you’ve played any freemium grinding game that features leveling mechanics you’ll know exactly what you’ll be in for here.

Honestly, my only disappointment with the game is that while I love all the combat and the fabulous integration of the yokai, the monetization aspects felt pretty same-y, for lack of a better way to put it. Whenever I see big names like Platinum, there’s always a part of me that hopes they try something new and exciting when it comes to monetization instead of just going to safe route of endless leveling of everything with allegedly optional purchases to speed that up. (“Allegedly," because while they insisted this is the case, it’s always real difficult to get a feel for how the economy of a freemium game is actually balanced in a ten minute demo.) 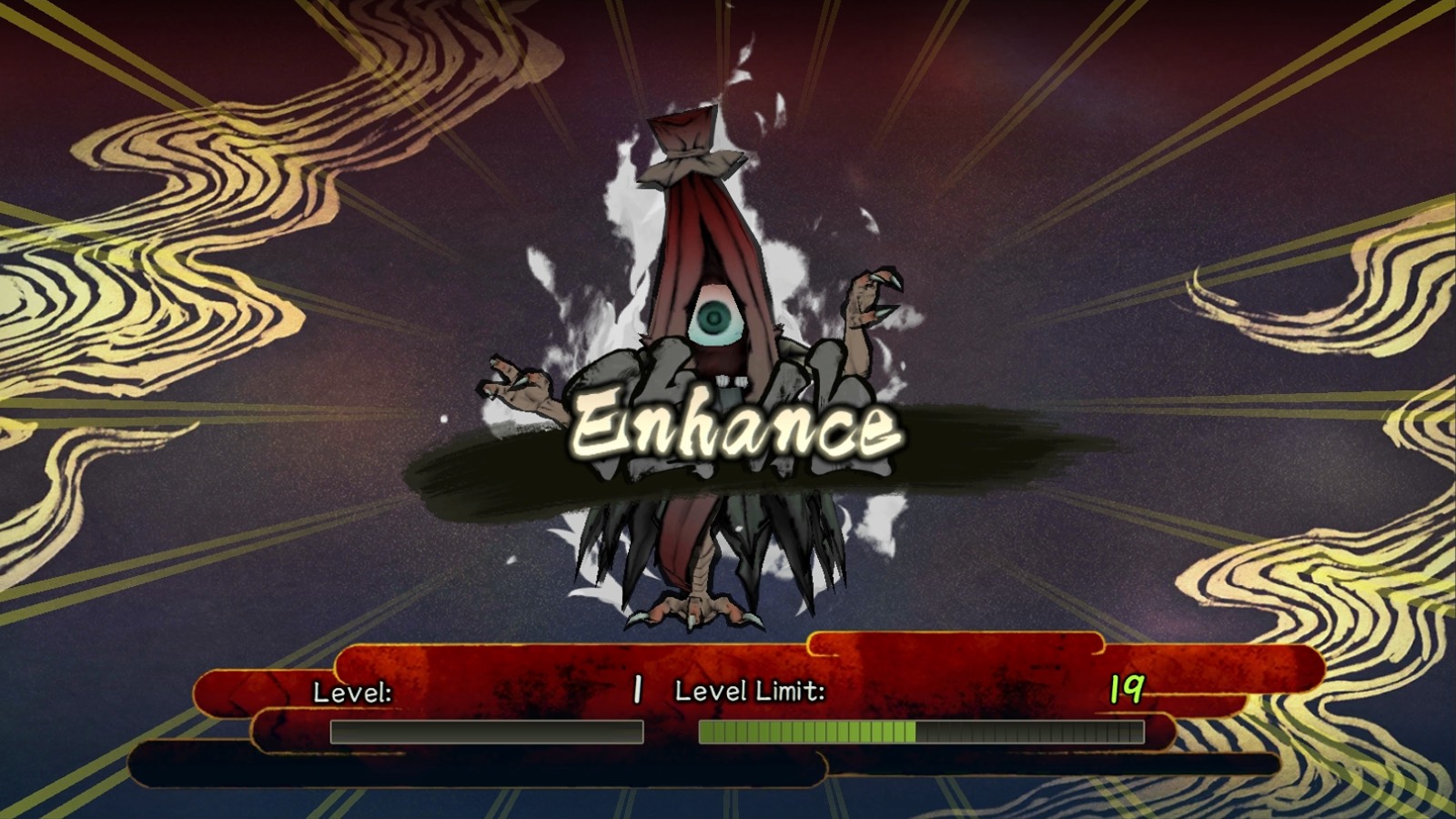 To their credit, however, there is a system of permanent unlocks that persistently boost your progress sort of like coin doublers in other games. These unlocks will also have multiple levels of effectiveness you can buy into. While no one could really commit to any sort of official answer, it sounds like what they’re shooting for is if you buy all the persistent unlocks it basically turns World of Demons into a premium game. How true that ends up being and how much that’s going to cost is still up in the air, but I do really like that this is even in their plans at all.

Overall, World of Demons is an incredibly cool game that I think mobile gamers interested in the somewhat underrepresented action genre are going to really enjoy. What I’m interested in seeing is how the larger Platinum Games fanbase reacts to World of Demons, as it seems like they typically hit a very hardcore audience who (to put it lightly) often doesn’t think that highly of mobile games. Will World of Demons turn that perception around? I sure would like to think so, as anyone who passes this game up when it launches because it’s a freemium mobile game is going to be seriously missing out. I guess we’ll find out when World of Demons hits the App Store later this year.

…And just for fun, here’s two exclusive images of yokai from the game that Platinum sent us: 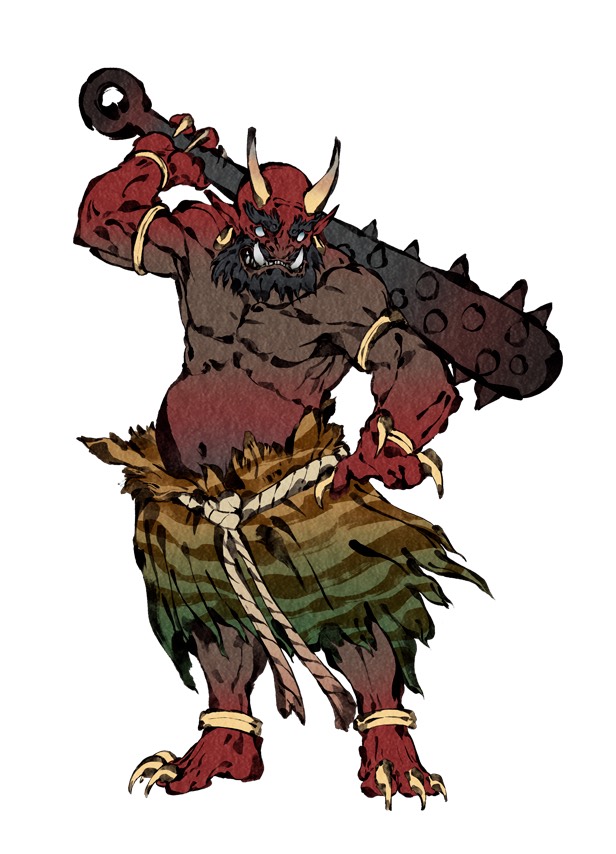