Do you like the Square Enix Go series of games, but feel like they needed more crime? Congratulations, Vandals ($3.99) is the game for you. This turn-based puzzler unapologetically resembles the series that started with Hitman Go ($4.99) and applies a graffiti and street art theme to the game. It’s really derivative, but the graffiti aspect is fun, and the game provides a history of street art to boot! However, depending on your feelings about the Square Enix Go games, this might not be worth picking up. 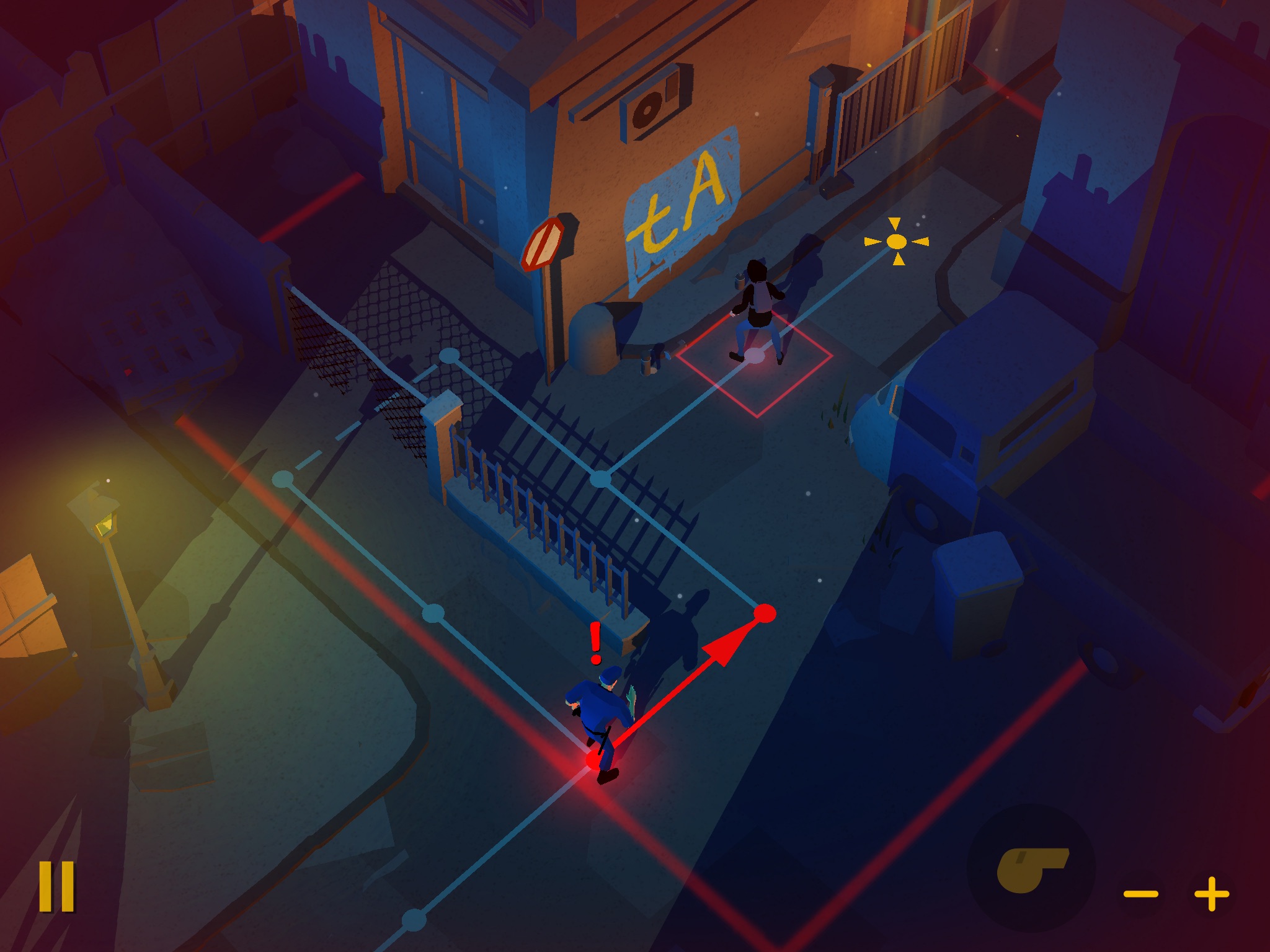 This is a turn-based puzzler where you move one between connected nodes on the grid-like levels, using stealth to avoid detection from the police. You move, and then the police make their move, but if you walk into their line of sight, or into a fail state position where you are one tile from them, this will happen even before the police make their move, even if their behavior indicates they will turn a certain direction, for example. Your goal in each level is to make it to the designated graffiti spot, spray paint your message of truth (or a giant cartoon dong), and then bust it to the exit, without getting nabbed by the coppers.

Where Vandals differs from the other Go games is that sound generation plays a big role in deterring your pursuers. You can whistle to draw nearby guards, though you better have a plan to book it out of there before they see you and try to capture you. The guards aren’t very smart for most of the game, thankfully, so you can just get out of their line of sight…usually. You’ll also pick up bottles that you can throw further than you can whistle, so you can create diversions. You are the loudest street artist in the history of the medium, so you will wind up drawing attention to anybody near you when you spray your latest masterpiece. So, ideally you’ll want to send your enemies far away, and then spray in peace. 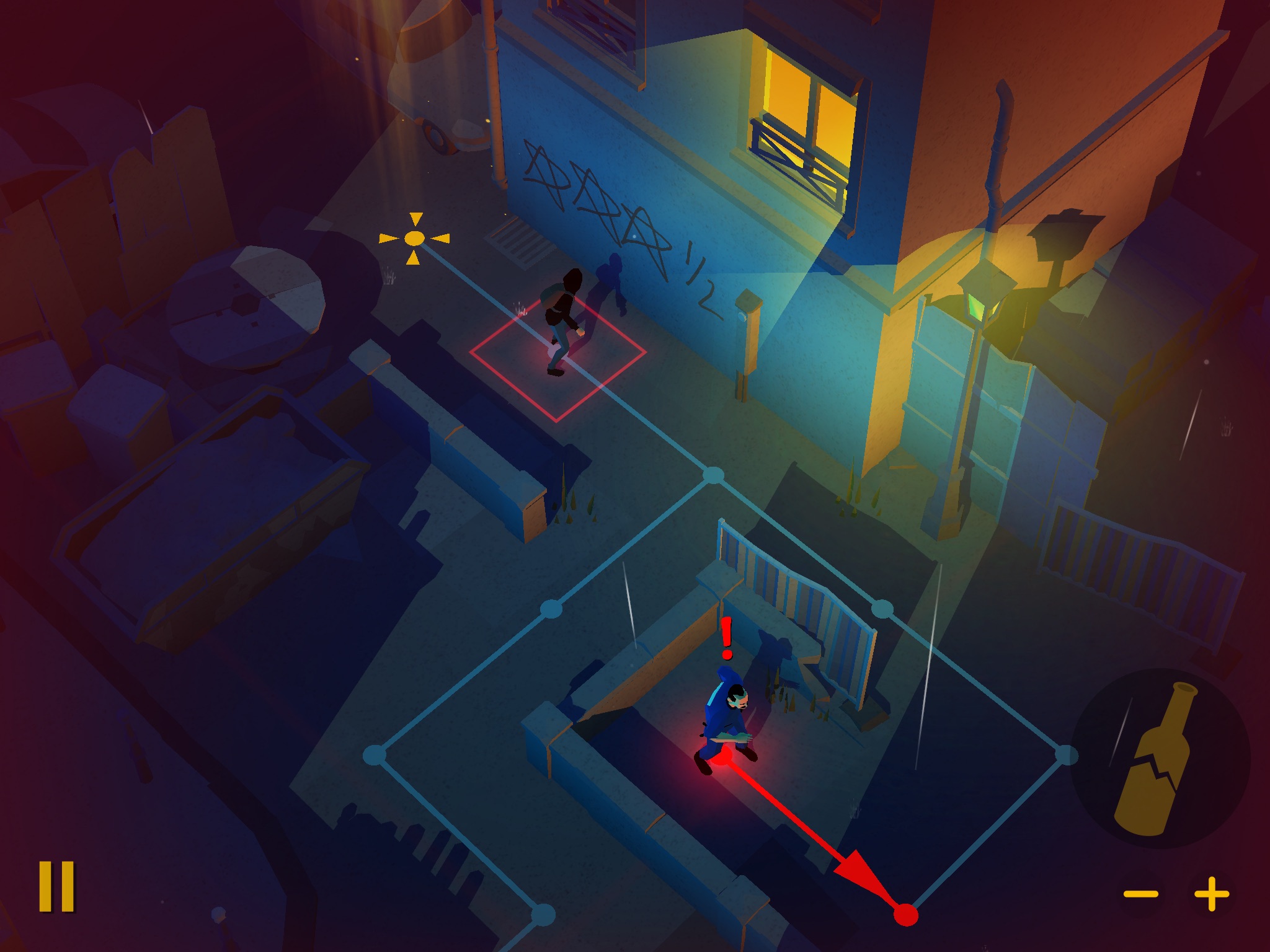 A lot of the fun actually comes from making your own graffiti. You’re given a fresh canvas on each level, and while you can just use the name you put in (with a variety of different fonts) you can also draw your own graffiti. There isn’t a time limit, or any bonus to drawing custom graffiti, it’s just a neat thing that you can do. And hey, it’s a nice bit of fun.

The game offers three stars for doing well on a level: completing without being seen, getting the bonus star, and completing in under a certain number of moves. You can complete levels without any stars, though getting stars mostly just unlocks other levels, including side quest levels you can play through. While it might not make it possible to win a level with the Invisible or Turns conditions, you can do some fun things like getting cops to chase you around corners, freeing up the exit in the level for you. The cops have predictable behavior, and while the game can throw some stumpers at you, I never felt excessively challenged. 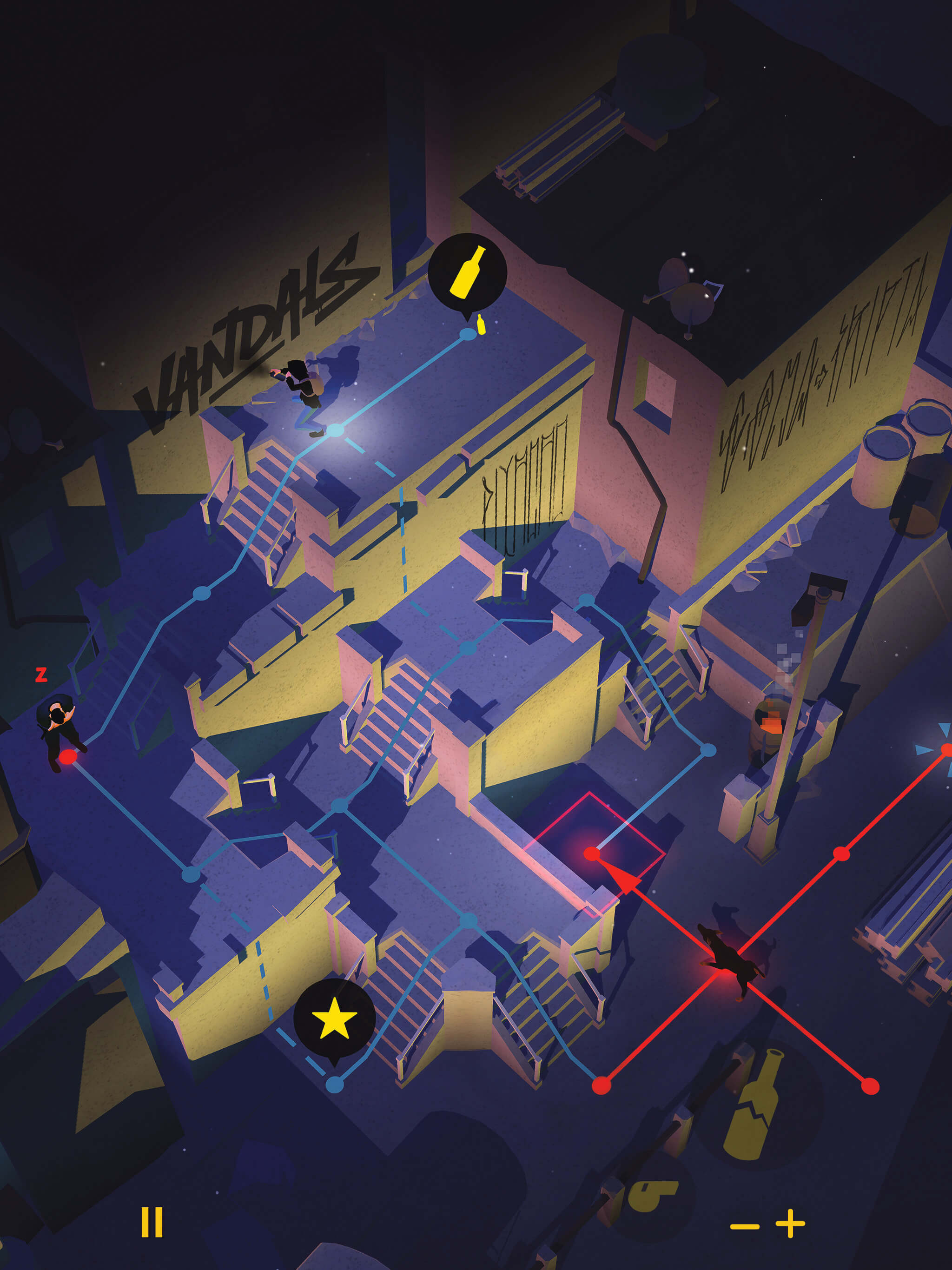 Also, the game does more than just use graffiti and street art as a convenient theme. There are photographs you can tap in some levels that will show you information on street art history, and educate you about some famous street artists throughout history. The game itself takes place in different periods of history in famous world cities, and artists from those scenes are featured in these little info cards.

Vandals supports portrait and landscape orientations, which is something more games absolutely need to do going forward. Especially for a turn-base game like this, where it feels like there’s no reason for it not to support portrait mode if at all possible. Vandals can be played one-handed on a bus or train, or just sitting back, relaxing. It’s a convenience factor that many games, especially puzzle titles, tend to overlook.

The chief problem with Vandals is that it’s extremely derivative of the Go games. There’s something rather particular about the rules, the structure, even the interconnected dots, that makes the game just feel like an unauthorized entry in the Go series. This is fine! It’s a good game series to steal from! Of course, it seems like Square Enix Montreal isn’t making any more Go games, so if you want more of this kind of gameplay, something like Vandals is what you’ll have to enjoy. And honestly, I find Vandals to a bit more enjoyable than Deus Ex Go was, particularly since Vandals has a sense of style and character that Deus Ex lacked.

The problem is that I didn’t really enjoy Deus Ex Go because it didn’t bring a whole lot that was new to the table. While I’ll certainly enjoy something like dual-stick shooters in all their variations, this turn-based puzzle gameplay is built around so many specific rules that future games built around those rules will start to feel similar. Each of the Go games added its own twists, but it feels like the concept has had diminishing returns with further entries. And Vandals, as a game that cribs from that series, winds up being an original title that still feels a bit tired. Like, I’ve been here before, I’ve seen how this all works. Sure, there’s a couple new gameplay elements, but that’s not exactly anything surprising. Live by the homage, die by the homage.

The counterpoint is that if you haven’t played the Go games or enjoyed Deus Ex Go, you’ll likely have a good time with this one. Such is the nature of these kinds of games that hew closely to their source material. And it’s certainly a credit to Vandals that it feels just like the “real" thing while also honestly having its own catches. I just can’t get over the fact that I feel like I’ve played this before. It’s not bad, just that maybe the concept needs to wait a few years before it feels fresh again.