Original Journey ($2.99) belongs in the category of “game released on Steam that I’d never heard of until a mobile version suddenly appeared on the App Store." And let me tell you, I am extremely thankful for these situations. I don’t play games on Steam, and I don’t really follow the scene that much, so when a mobile version of a Steam game arrives it gives someone like me a chance to experience something I’d never even know about otherwise. And in the case of Original Journey, the experience has been awesome and, well, quite the original journey! 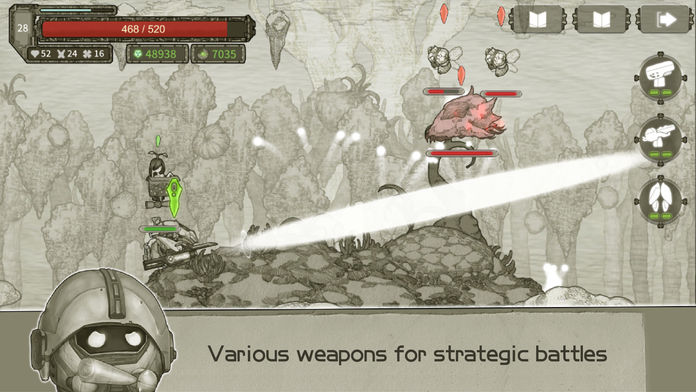 This game is a super mashup of genres. It’s part platformer, part shooter, and part tower defense. You play as a new recruit in an alien military who is infiltrating a hostile environment under the guise of harvesting resources. But you, the clever recruit that you are, feel like there’s more to you being there than simple harvesting, and thus you set out to find what’s really going on. In truth this is the sort of game where the story could be insignificant, as the star is really the great gameplay, but it’s nice to see that there’s an interesting and surprisingly well-written tale to be told for those who want to invest in it.

The actual gameplay though is where Original Journey shines. The game controls like a platformer, with your character able to move and jump throughout the base where you’re stationed as well as each level. You can also shoot a variety of weapons which you’ll unlock during the course of the game by collecting special resources. The firing of those weapons is done really well, with a dedicated shoot button on screen that you can slide upwards and downwards to change the angle of your shot.

Each mission has you dropping into a floating island and then fending off an enemy attack, and sometimes completing special requirements. This is where the tower defense element comes into play. You can place turrets around the island where you think they’d be most beneficial, and then as enemies are attacking your turrets are helping take them out as you yourself are running around and blasting them with your weapons. It’s extremely fun and can get quite challenging. You’ll go out on expeditions killing enemies and scavenging for resources which you’ll then use when you return to your base on things like unlocking new weapons and outfits.

It’s a really satisfying gameplay loop, and it works great as a mobile game. At any given time you’ll have a number of different missions to complete on your mission board, so you always have a good idea of what needs to be done. Original Journey wraps it all up in a really cool monochromatic, almost pencil sketch art style and a really atmospheric soundtrack. Best of all is that, despite the resource gathering and upgrade systems, Original Journey is a totally paid, IAP-free game, which has been a theme with many of the games released this week. For a cool three bucks you too can go on an original journey that I think is well worth taking.