It’s a indisputable fact that Laser Dog Games is incapable of making games that I don’t enjoy. I’m especially partial to Hopiko ($0.99) and Alone ($0.99), but really this tiny studio’s entire library is dear to my heart. So I’m not at all surprised that their latest release Ava Airborne (Free), which they’ve partnered up with Playstack to launch on the App Store this week, is also a winner. It has all the hallmarks of a Laser Dog release: Beautiful visuals, a high level of polish, and tons of personality. If you enjoy such works of gaming art as things like Tiny Wings or Alto’s Odyssey, then you’re going to feel quite pleased with Ava Airborne. 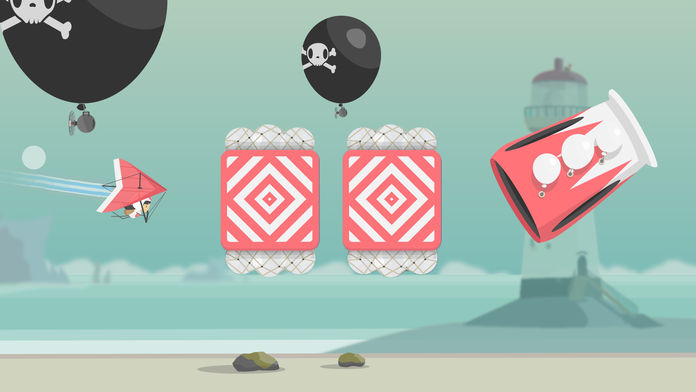 The story revolves around a girl named Ava, naturally, an adorable stick-limbed girl who wants more than anything to be able to fly. She’s not content to just dream about it though, so she creates all sorts of wild contraptions in which to take to the skies. You’ll start out with your trusty homemade glider, but eventually you can unlock and buy a host of items to help you fly longer. Gameplay is as you might expect. You’ll tap the screen to rise, and let go to free fall, and along your flight you’ll want to aim for things like balloons and booster pads in order to keep your journey going. One thing you DON’T want to come into contact with are things like evil black balloons or lasers, which will cause you to plunge from the air.

This is where a cool twist comes in though that differentiates Ava Airborne from similar games. If you run into a hazard, you have the time it takes before you hit the ground to rapidly tap both sides of the screen to fill up to meters, and if you’re successful, you can continue your run. If you fail, well, THUD! Your run ends. I love this second chance mechanic, and there’s even trampolines and such spread around on the ground so if you aim carefully you can actually get a huge bounce off of one back into the sky. This is a “see how far you can get" type of game and the bouncing part reminds me a bit of the Burrito Bison series or similar “launcher" games.

This mix of different gameplay elements comes together so well in Ava Airborne, and with each run you’ll earn a bit of experience points that go towards leveling up your character, which in turn unlocks more and more crazy contraptions to buy. It’s a great gameplay loop, and the type of thing that will keep you busy for weeks or months to come. The flying itself is a treat, and feels a lot like flying with the cape in Super Mario World as you need to build up elevation and then dive down to create speed before leveling out and just cruising. It’s a ton of fun! So if you like any of the games mentioned in this piece, or are a fan of Laser Dog’s stuff in general, I can easily recommend checking out Ava Airborne for free.