It would be hard to believe that many people out there wouldn’t know an absolutely legendary developer like Valve, but in case you’re a die-hard mobile gamer who hasn’t followed the console / PC world at all, here’s the gist: They kicked things off as a developer all the way back in 1996, and a couple years later released a first person shooter called Half-Life. Half-Life itself was wildly popular, but the game was rapidly eclipsed by the growing mod community that surrounded it. Early mods like Action Half-Life and Team Fortress made their way to Half-Life, but it was Counter-Strike that really took the game to a whole new level. I couldn’t even tell you the number of people I know who exclusively bought Half Life to play the Counter-Strike mod. 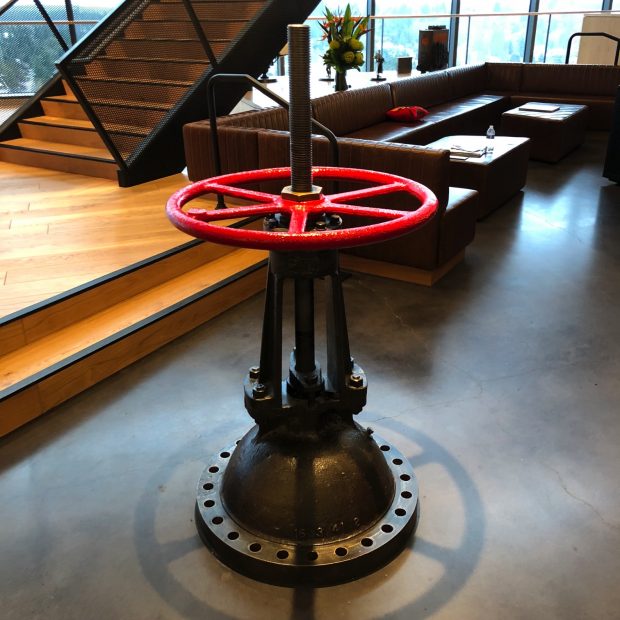 Half-Life 2 and the Source engine both launched in 2004, and once again, Valve had another hit on their hands- Both because Half-Life 2 was a massive success but also because the Source engine went on the serve as the foundation for other absolutely classic tiles like Portal, Team Fortress 2, and many others. In 2015 they released Source 2, with Dota 2 as the first game to use it. Dota 2 has since gone on to be one of the most popular games in the world, with a absurdly massive esports following with the grand prize of the year being winning the Aegis of Champions trophy, which they took out of its display case and just let me hold because apparently that’s a thing that happens at Valve: 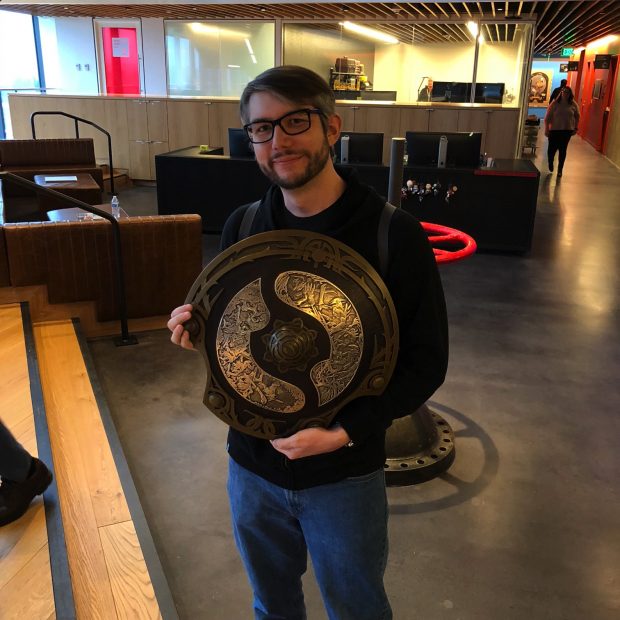 It has been a long time since Valve released anything new, but at the last Dota 2 The International tournament (effectively the Dota 2 championships) they announced Artifact. At the time, there were no details available on the game beyond the vague announcement that it was some sort of card game based in the Dota 2 universe. The cat was let out of the bag last week when they invited me, and a few other journalists to the Valve offices. Before we got into any of that though, they gave us a tour which had me fairly starstruck as someone who has been a fan of Valve games since the launch of Half-Life. 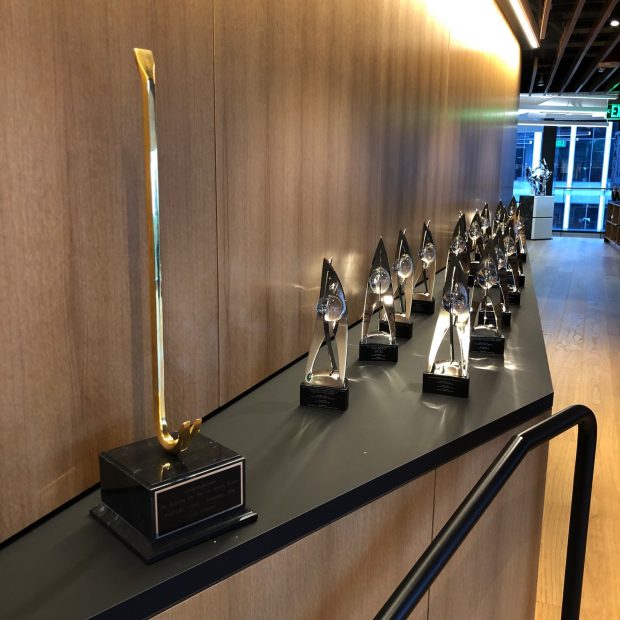 The Valve offices are in downtown Bellevue, Washington and aside from offering an absolutely beautiful view of the surrounding area, they’re packed to the brim with all sorts of Valve-y things. Awards are everywhere, including the above Golden Crowbar which was the first award Valve ever received. It came from their Publisher, Sierra, following the success of Half-Life. Since then, Valve has earned so many accolades, it’s really hard to keep track of them all. 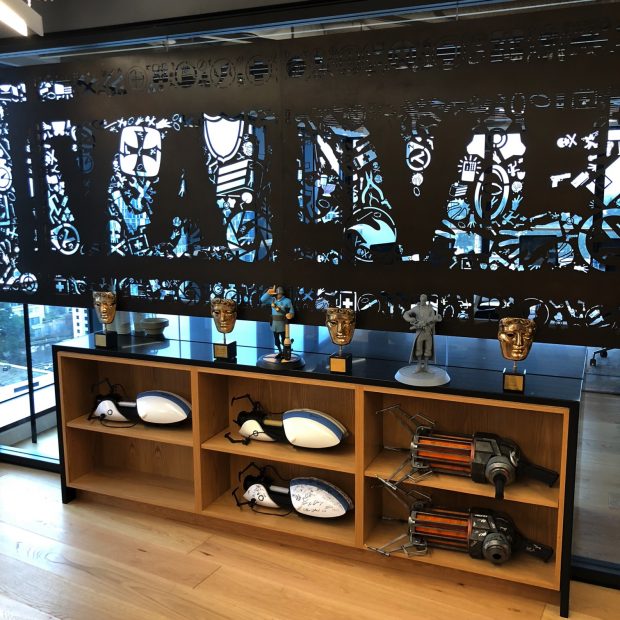 Walking a bit further down the hall beyond Valve’s trophy wall gets you to their display of gravity guns and portal guns. These things have an absurd level of detail to their construction, and all I could really think was how much a Gordon Freeman or Chell cosplayer would kill for one of them. 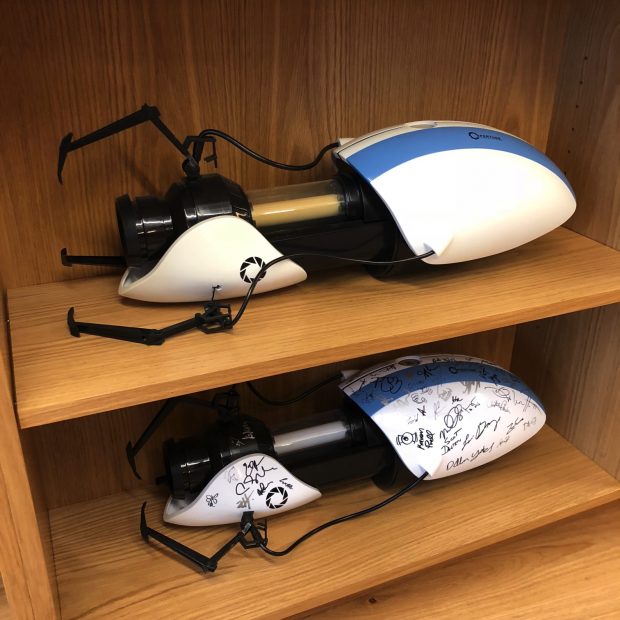 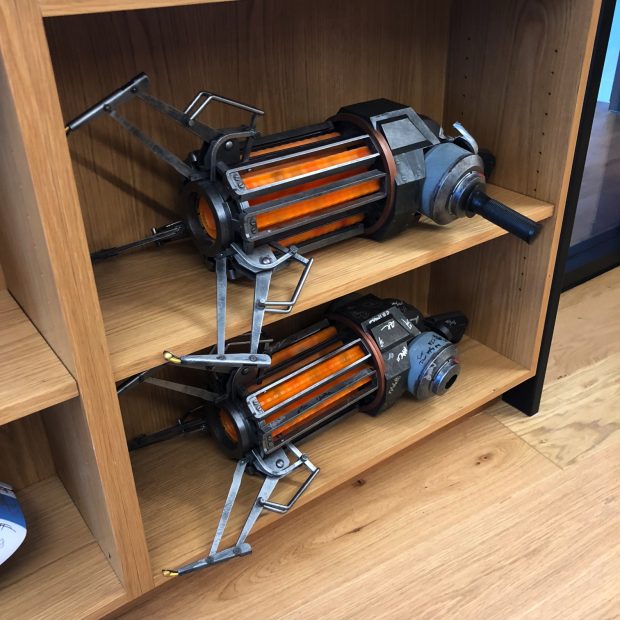 There’s a Valve guitar, because of course there is: 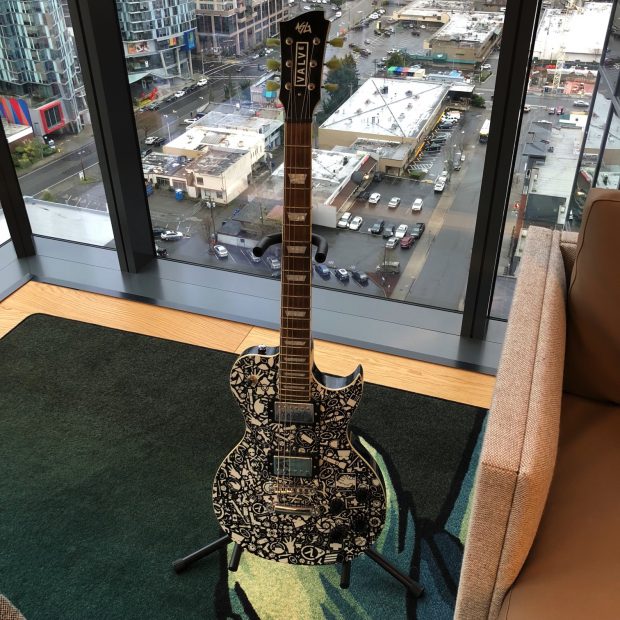 A hallway is decorated like the Combine walls from Half-Life 2: 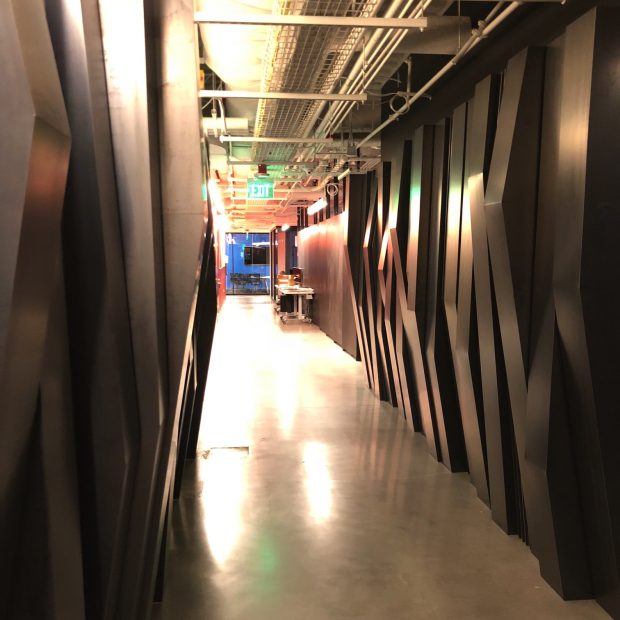 All the elevators on Valve’s floors are decorated particularly Valve-y: 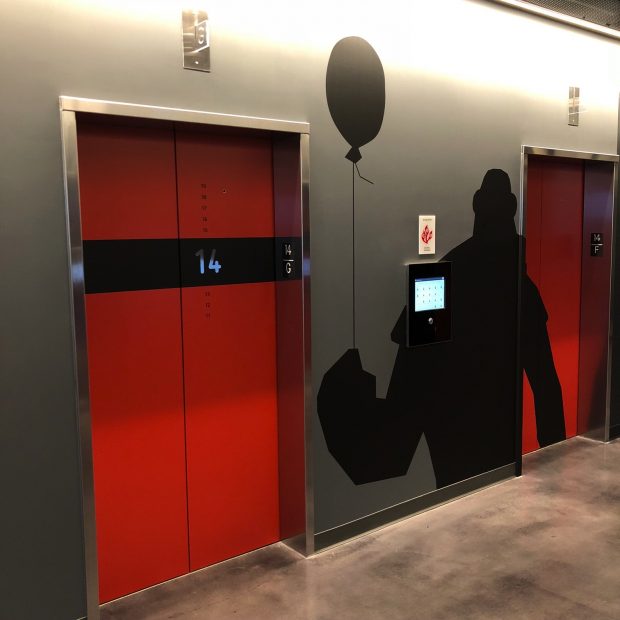 Loads of Valve employees have kids, so there is room in the office for them to hang out as well. If you’re a teenager, there’s sulking rooms. If you’re younger, you can hang out in Pyroland: 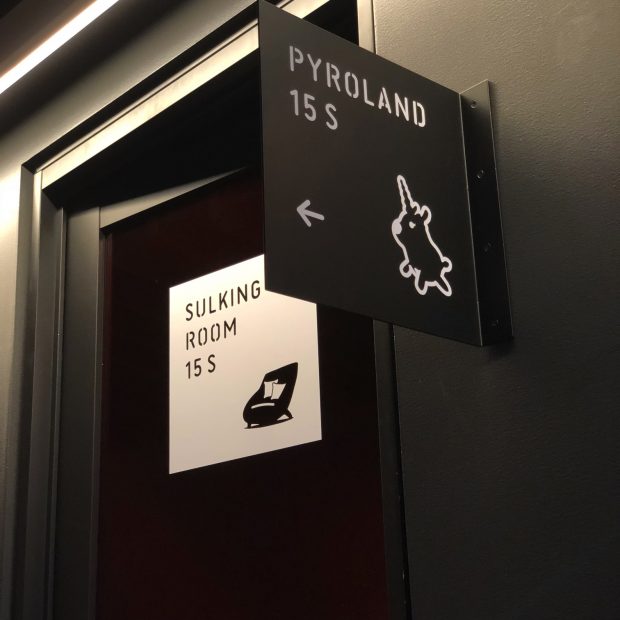 What’s Pyroland? This is Pyroland (It’s a reference from Team Fortress 2, if you’ve never played it): 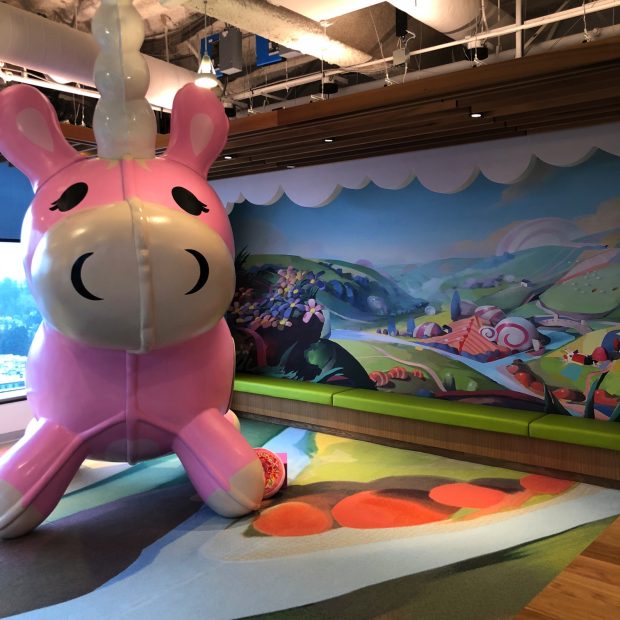 If you think the office itself looks cool, that’s really nothing compared to the way that Valve as a company is structured. While I was there to preview Artifact, hearing about the nitty gritty of day to day life working at Valve was just as interesting. At Valve, no one has titles, and it’s a totally flat company. If you work there, you don’t have a traditional boss, and no one works under you. 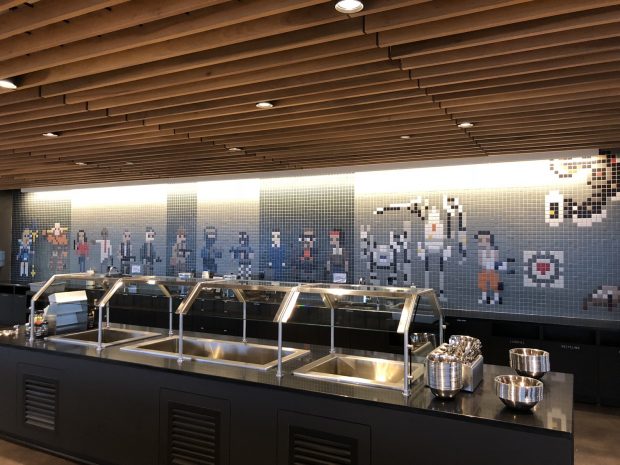 Instead, you just join whatever team you feel like working with, and everyone’s goal as an employee is to do things that bring value to the customer. If for you that means getting involved in the Steam platform, you just roll your desk over to that team and work on that. If you get bored of working on Steam, or the idea of working on Artifact is more appealing, you just gracefully leave the Steam team and figure out something that you can participate in on Artifact. 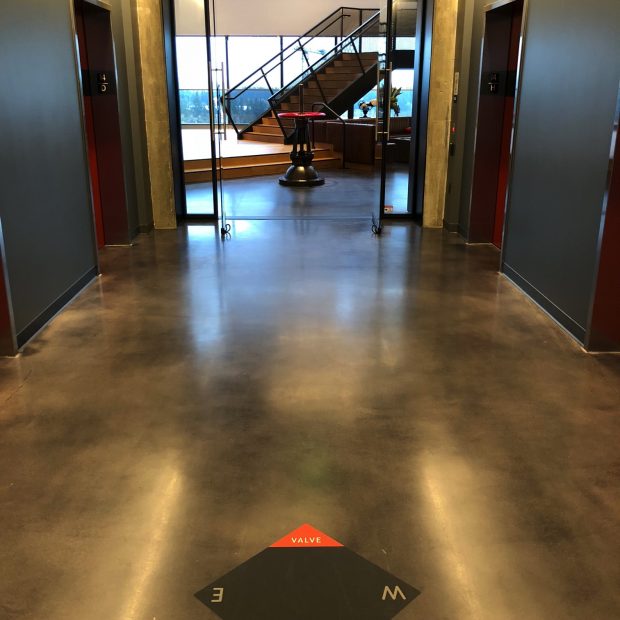 If you’re used to working for a traditional company, this organization might sound weird, but it’s clear that it’s working. Valve is not only wildly successful, but when you randomly ask people you meet at Valve how long they’ve been with the company, it’s not abnormal to hear 7 years, 10 years, 12 years, and more. Comparatively, it feels like when I talk to people who work in Bay Area mobile-centric companies, employees move around like kids trading baseball cards. 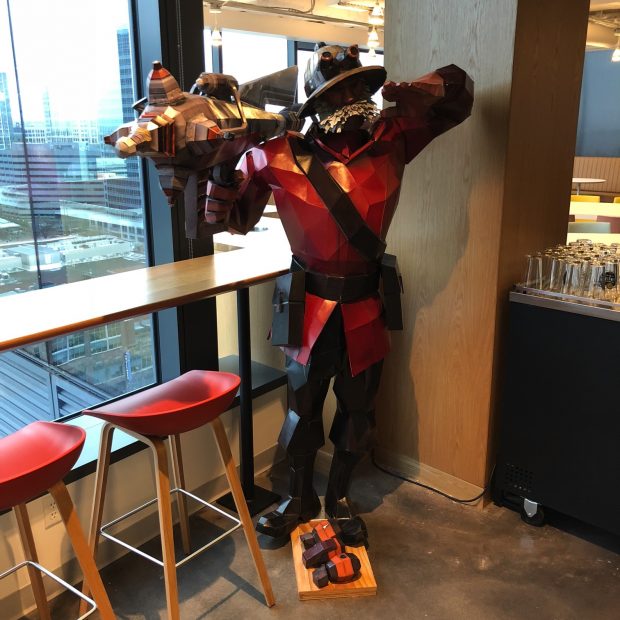 This left a massive impression on me, as I’ve always felt that people who are happy doing what they do make the best products, and that’s crystal clear with everything Valve has released. Judging by that metric, it’s hard to imagine Artifact being anything other than Amazing.

But what is Artifact? Check out our hands-on preview for more!