Read Only Memories: Type-M (Free) finally brings the cyberpunk, Snatcher-inspired point-and-click adventure to mobile, years after its Kickstarter project promised a mobile release. Since then, the game has seen release on pretty much every other system under the sun, including the Ouya and Vita, but mobile players have not had their chance to explore 2064 Neo-San Francisco for themselves. Now they can, with Read Only Memories: Type-M. This futuristic point-and-click adventure has you tagging along with the robotic AI Turing, who is trying to discover what happened to their creator, Hayden. By solving puzzles and interacting with people, you wind up uncovering a deeper conspiracy that goes into Hayden’s disappearance. 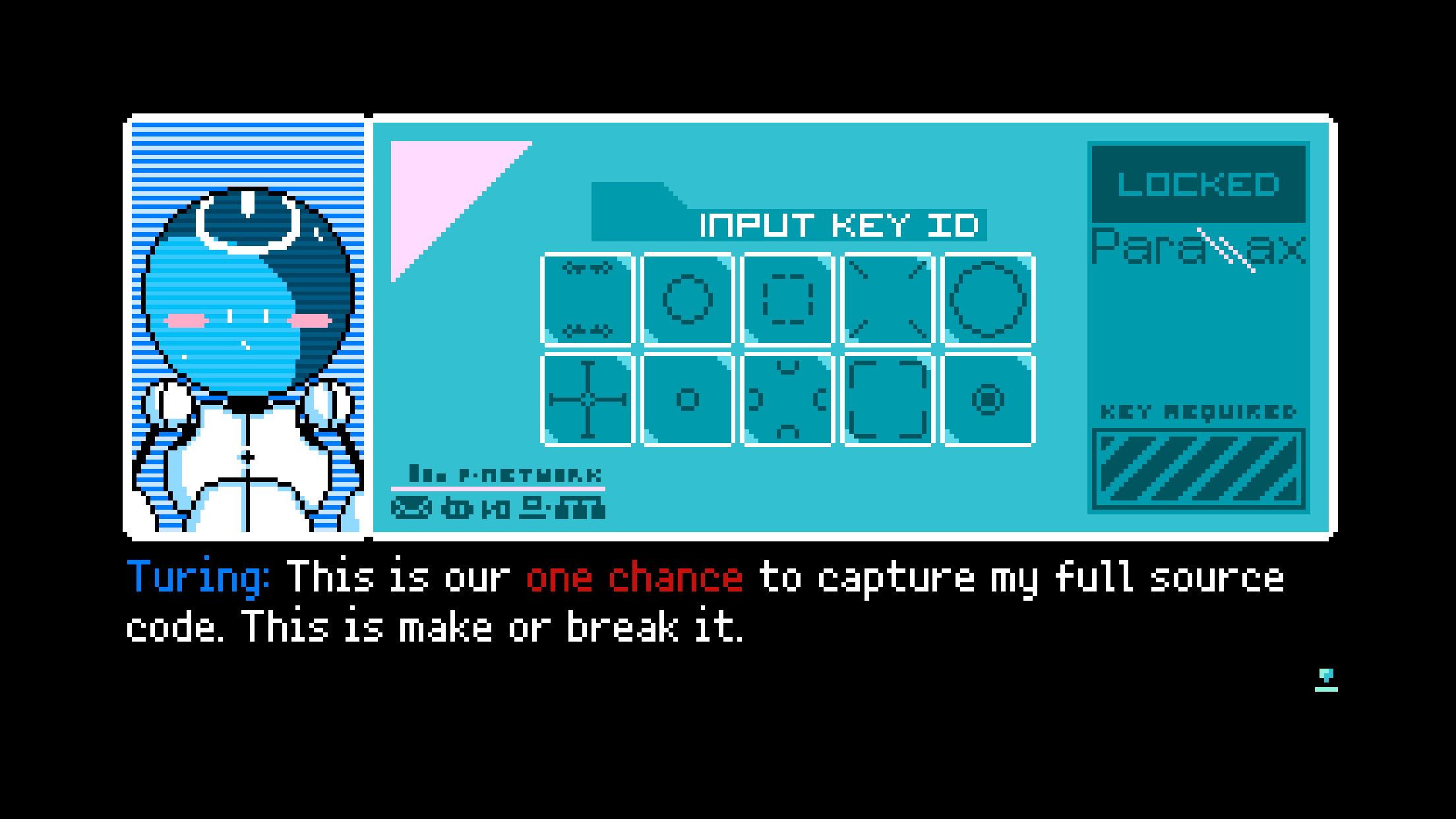 Read Only Memories creates a distinctive world of the future. Developer MidBoss puts a lot of work in to make sure that a lot of things in the world are normalized, particularly the use of non-binary pronouns that’s never really commented upon. While gene splicing and hybridization are a hot topic in the game, characters from outside the gender binary go largely unremarked upon. This is futuristic San Francisco, after all. While the game is coming from a very particular perspective, it’s uniquely not a judgmental one. It would have been easy for the Human Revolution group in the game would be presented from a one-sided perspective as an evil group. Instead, the game tries to make its point that some of the hybrids in the world have really good reasons for undergoing their process.

But the game lets you play how you want. But if you want to treat the hybrid Jess like a jerk and the Human Revolution leader Brian friendly, then you can! Feel like Turing is an abomination and want to treat them like a jerk? Go for it! The game definitely prefers to show, not tell with its perspective. I can surmise, based on the creators being behind the GaymerX conferences and through the conspicuous inclusion of queer themes, where the politics lie, but Read Only Memories is more of a vessel for how the player wants to approach things, and then they can decide based on their experience. There’s definitely a point of view for Read Only Memories‘ world, and it’s not really presented as a particular dystopia or utopia, and your perspective of how much it tilts in either direction will depend on your personal beliefs! It is a really interesting setting for a game, and a big reason to check this out at some point. 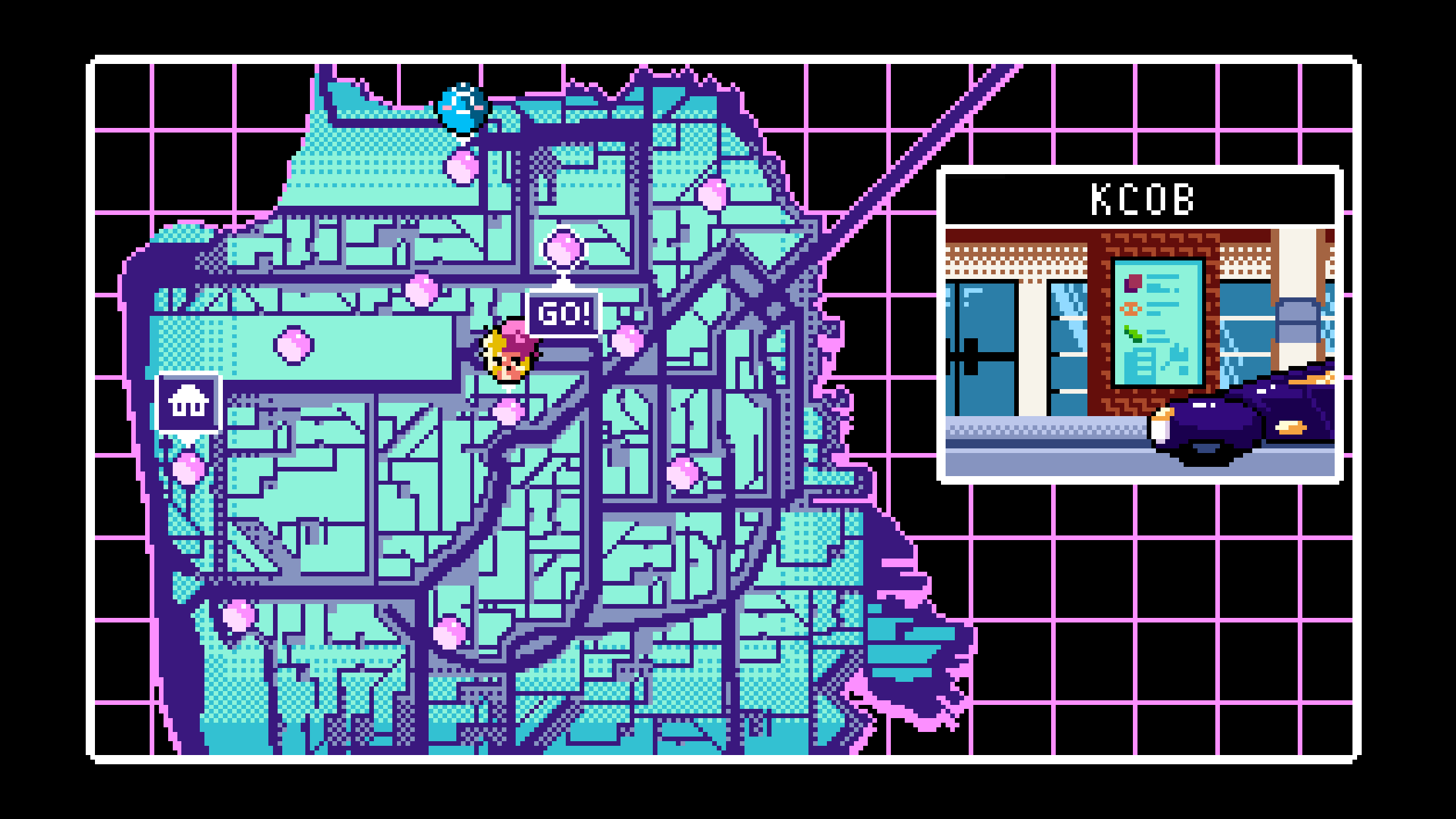 While most point-and-click adventure games seem to borrow from the LucasArts tradition, Read Only Memories takes a lot from Snatcher, the Sega CD cult classic. Just to show how much gaming culture has changed, the English version of Snatcher only sold a few thousand copies in the US and yet now, Read Only Memories got at least that many preorder downloads and has surely sold way more than Snatcher ever did. The artwork feels very 16-bit, as does the pacing, which feels a bit slow and deliberate, perhaps paying homage to older systems and their processing power or at least their stylistic choices.

The greatest strength to Read Only Memories is that the game makes it feel like your choices have value and matter. You can make characters angry, and that has consequences! While you can’t necessarily lead yourself into a stuck position intentionally (though one bug in an early version of the game makes that possible – keep alternating save files if you can), you can have an impact on the tasks you need to perform in the game, and even on the ending, based on what you do and how you treat Turing. I was playing Subsurface Circular ($4.99) recently, and noticed that while the game is quite engrossing, it’s built around that modern style of adventure game design where players explicitly can’t fail. Lacking fail states is fine, but it makes the experience feel a bit less dangerous, a bit less safe. Read Only Memories‘ consequences make the game a bit more fun. It feels like more of an old-school experience, and there’s a bit of a thrill there! 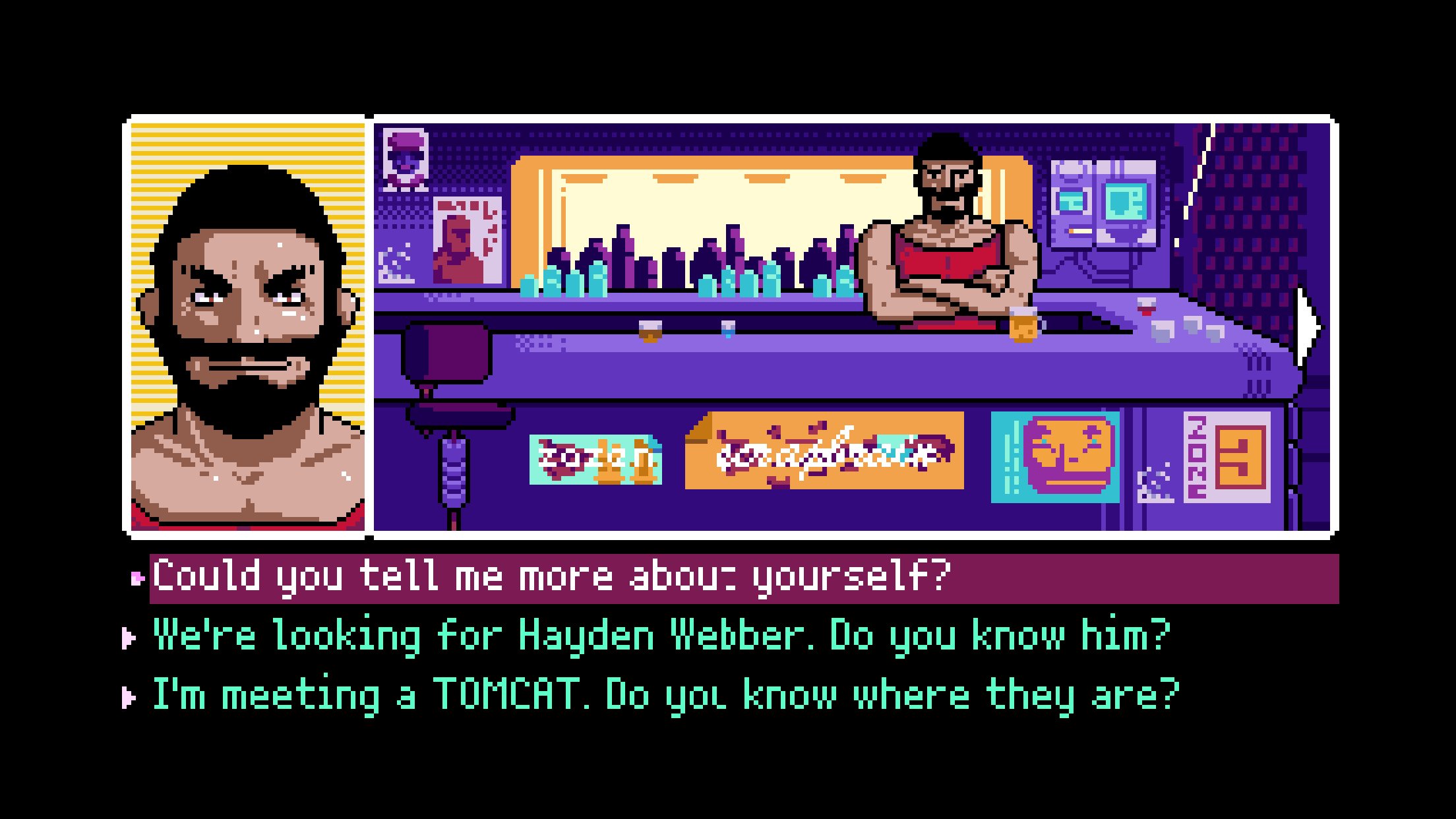 The downside to Read Only Memories‘ love of retro adventure games is that the pace feels slow. When I played Subsurface Circular, I felt like the game was a lot longer than it actually was. I have the opposite experience with ROM, to where I was playing and felt like I hadn’t gotten a lot done and then boom, an hour had passed. Perhaps this is the nature of the game’s dialogue and characterization, which are quite strong, but something about the game feels plodding, like the experience needs to chug along a bit faster, in more meaningful ways, to value the player’s time. This can be a matter of taste, but I think I like the more streamlined modern style better. 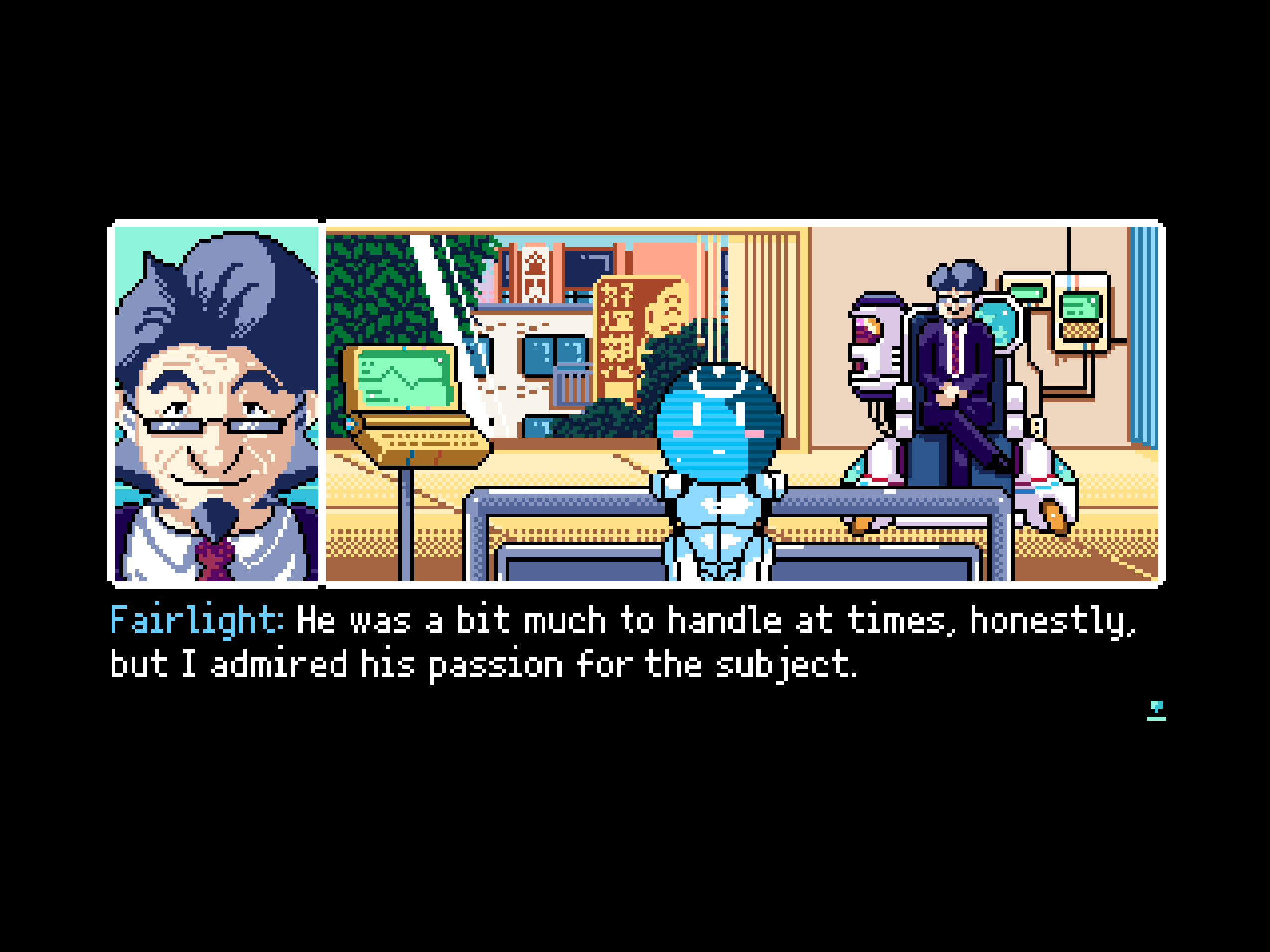 ROM is hardly unplayable on touchscreen, but I would rather play it with a controller or pointer device if possible. The game works best on widescreen devices, as in the iPad’s 4:3 orientation, the game takes up barely any space on the screen at all, and even on a 10" iPad some elements are a little small. You can drag around the screen to get a pointing cursor, as just touching some interactive elements might have issues with interactions between different things on screen, such as if an object is right behind a command. The pixel art makes it tough to find some interactive elements on screen. While the cursor does highlight anything that’s interactive, one moment early on had me stumped as I needed to tap on some books on a desk that didn’t seem immediately interactive separate of the desk and computer, and I’m not sure tapping on the books did anything. You have to be careful in this game. I might dig back into this one on the Switch for the full voice acting (missing in Type-M) and expanded post-game features, to go along with using physical controls. Additionally, some of the bugs in the iOS version’s launch day version, despite an immediate pair of patches, are a bit disconcerting.

Read Only Memories is a rather conflicting experience for me because I love its unique world, I just think that it suffers under some of its stylistic decisions to make for an experience that’s a little too slow for my tastes. If you’re patient, I do recommend playing this, especially with the free demo available. But I would recommend playing this on a system with physical controls, especially since you’re missing out on the voice acting with the mobile version. Still, Read Only Memories: Type-M is something you have to experience for yourself.