Packing a punch in more ways than one, ChronoBlade (Free) is a fairly weighty side-scrolling brawler with RPG elements. Attacks actually feel substantial giving you that good old fashioned Streets of Rage style feeling as you beat up some bad guys. Due to its RPG elements, ChronoBlade also isn’t shy when it comes to its F2P components which is where we come in. Want to avoid spending too much real money while still getting the most out of ChronoBlade? Stick with us, we’ve got you covered. 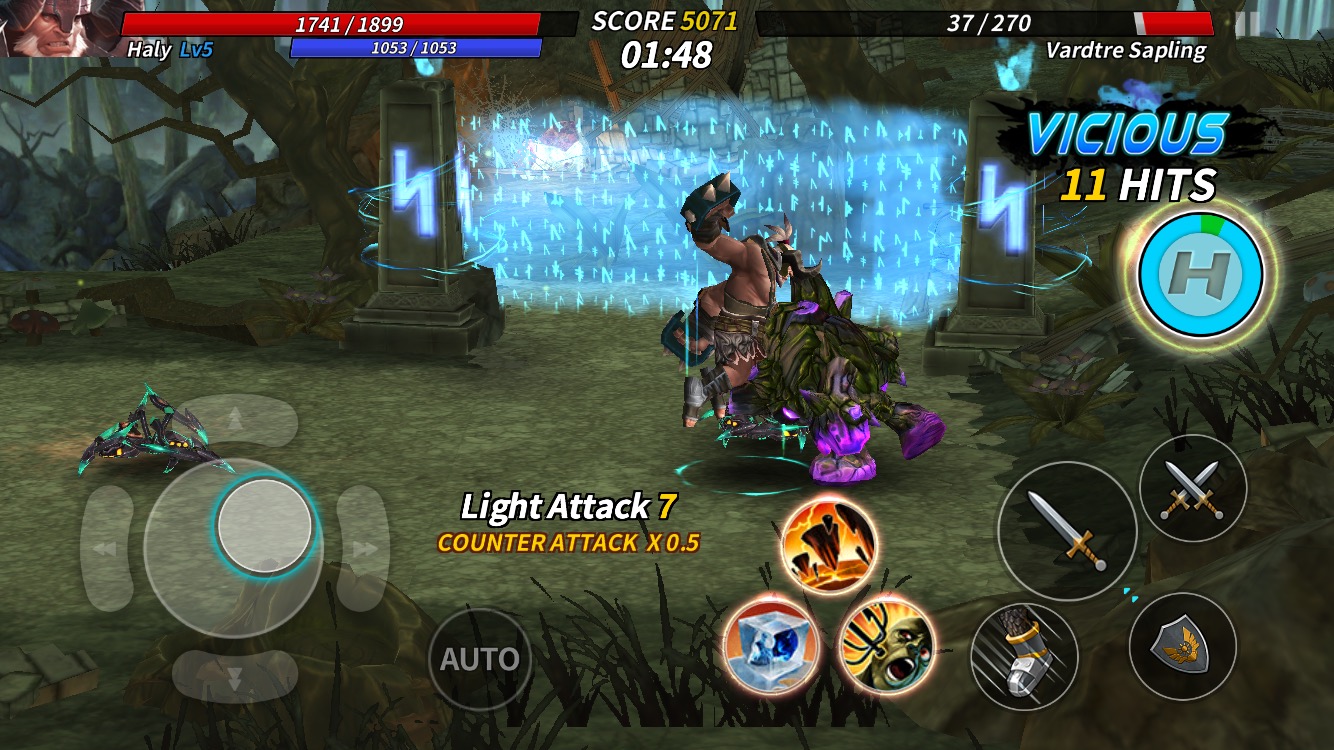 Fighting your way through waves of enemies is pretty straight forward. That’s a good thing as you’ll spend most of your time beating someone up here. You’ve got eyes and a brain, so you know what the virtual buttons do – movement is on the left hand side while the right hand side dictates types of attack along with special moves.

For the most part, you can get away with button mashing. Your success in ChronoBlade is pretty much dependent on grinding and using good equipment, rather than skillful moves. However, there is one useful thing to note – avoid getting hit.

Duh, right? Except, it’s not just down to saving your health bar. If you accrue a combo of hits against your enemy without getting punched back, you end up able to use a special ‘Hyper Move’ to inflict even more damage. Hyper Moves unlock after 10 hits in a row with their strength boosted after 30 hits and so forth. They make a massive difference when you’re fighting something with a lot of health, but you are playing a risky game. The moment you’re punched just once, your Hyper Move bar resets and you have to inflict 10 blows again to get it back. It’s not the end of the world, but it’s something to consider when combat is getting frantic and too busy to dodge easily. 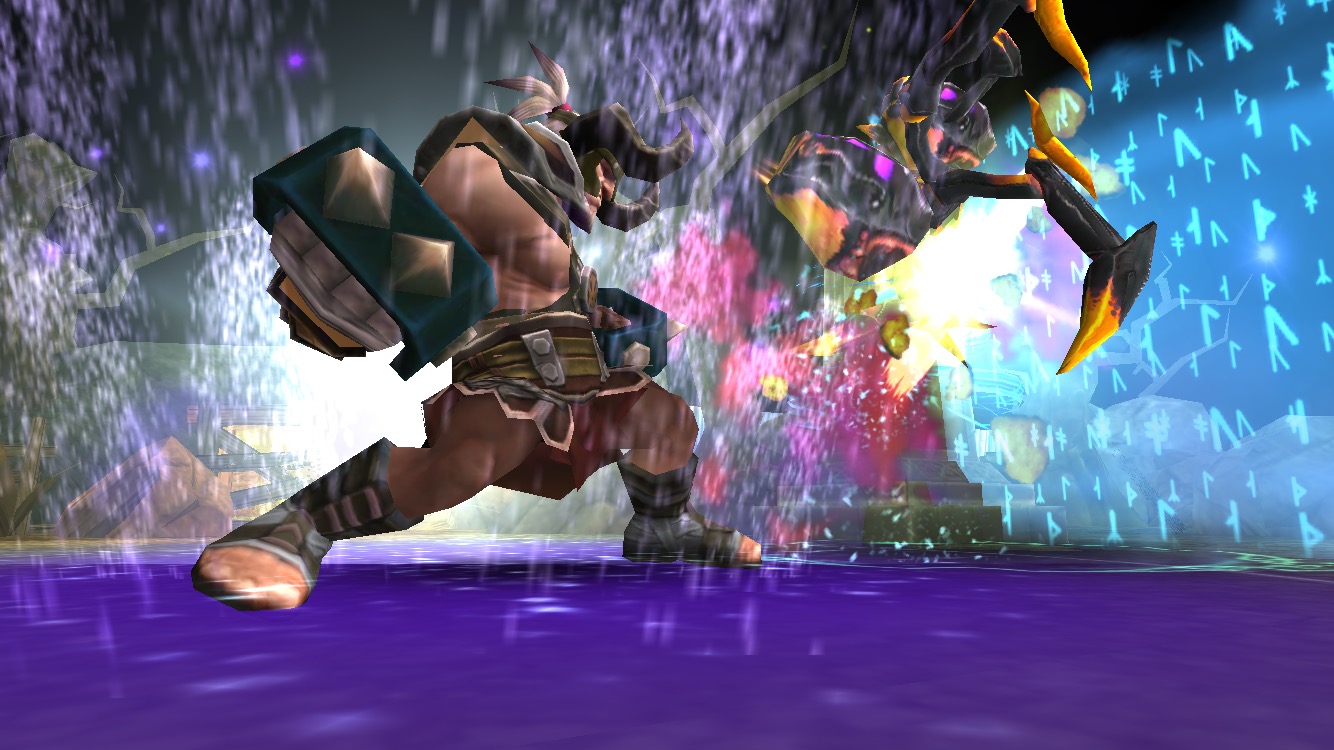 Special Moves are refreshed every 10-15 seconds, depending on their ability. Use them freely. Every level of ChronoBlade is focused on you trying to clear the stage as quickly as possible in order to maximize how many stars you earn. The more stars you earn, the more rewards. This isn’t a game for careful exploration. Go nuts with the Special Moves. They’ll come back around again soon enough anyhow.

Like in any other brawler, try to block your enemy into a corner. And, whatever you do, don’t allow them to do that to you, and don’t end up with enemies on either side of you. Positioning is a key part of making sure you’re not hit too often.

It’s easy to forget but you can jump in ChronoBlade. Combining a jump with some punches is a great form of attack, often leaving you briefly out of reach of your enemies. Learn and master the technique.

Tweaking your equipment load out 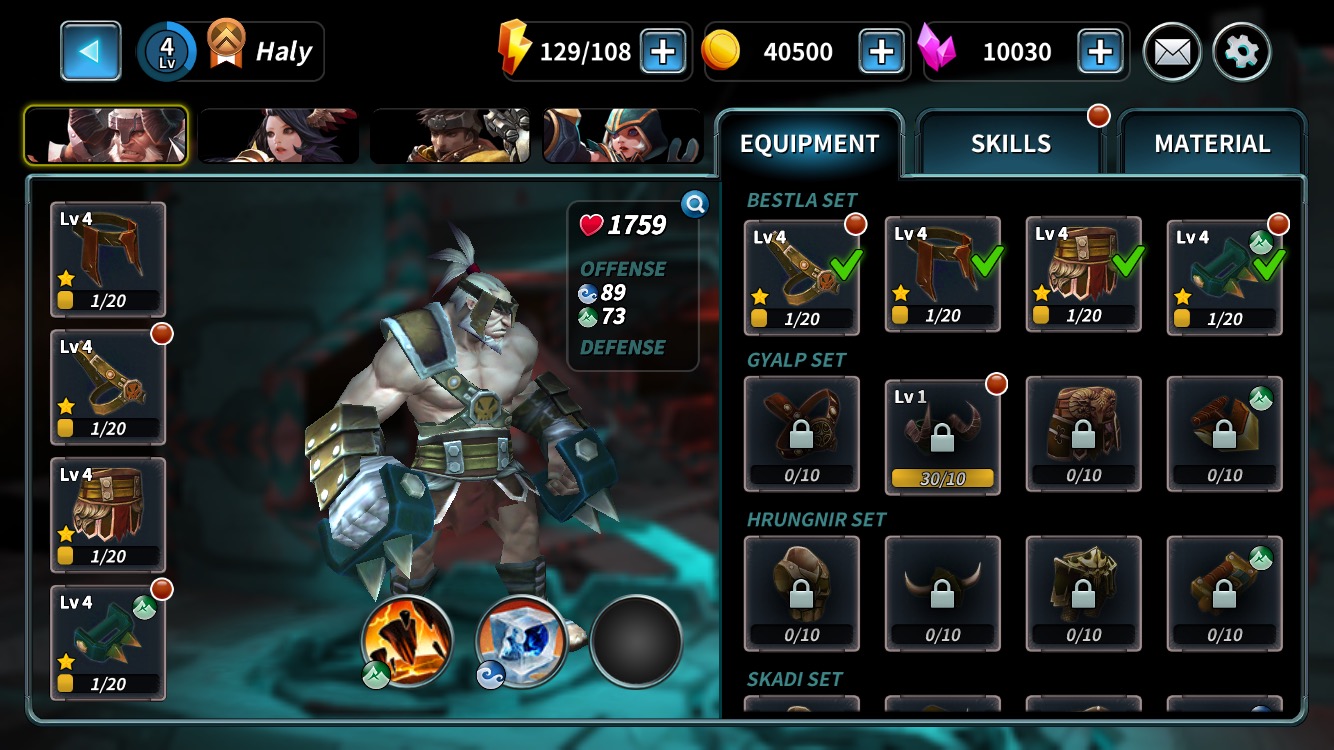 Equipment is kind of straight forward and kind of not. You’re given a starting set for each of your characters, with that equipment group focusing on a certain element.

Odds are you’ll try out Aurok first. His equipment set is focused on the Earth element. That means increased Earth critical damage as well as resistance. You’ll gradually unlock new pieces automatically but it’s down to you to work out how to combine the pieces, and when to level them up.

Boosting your equipment is done in a few different ways – via promoting, leveling up, and crafting upgrades. Leveling up is completed with experience potions which are collected during combat, while promoting is conducted via the coins you gain during each stage. Crafting upgrades is done through equipment scraps you pick up through doing mostly anything in the game.

In all cases, you’ll see a steady bonus to your HP, weapon damage, mana, and how quickly you regain mana. You really want to level up, upgrade, and promote as often as possible. There’s no harm in doing so. It’s just down to how many resources you have. Fortunately, ChronoBlade is pretty generous on that front.

It’s good to have a couple of decently leveled sets available, between different characters. That’s because different enemies have different weaknesses. It’s worth checking out on the map what kind of elements the enemies you’re dealing with offer, and planning accordingly. It makes a difference. 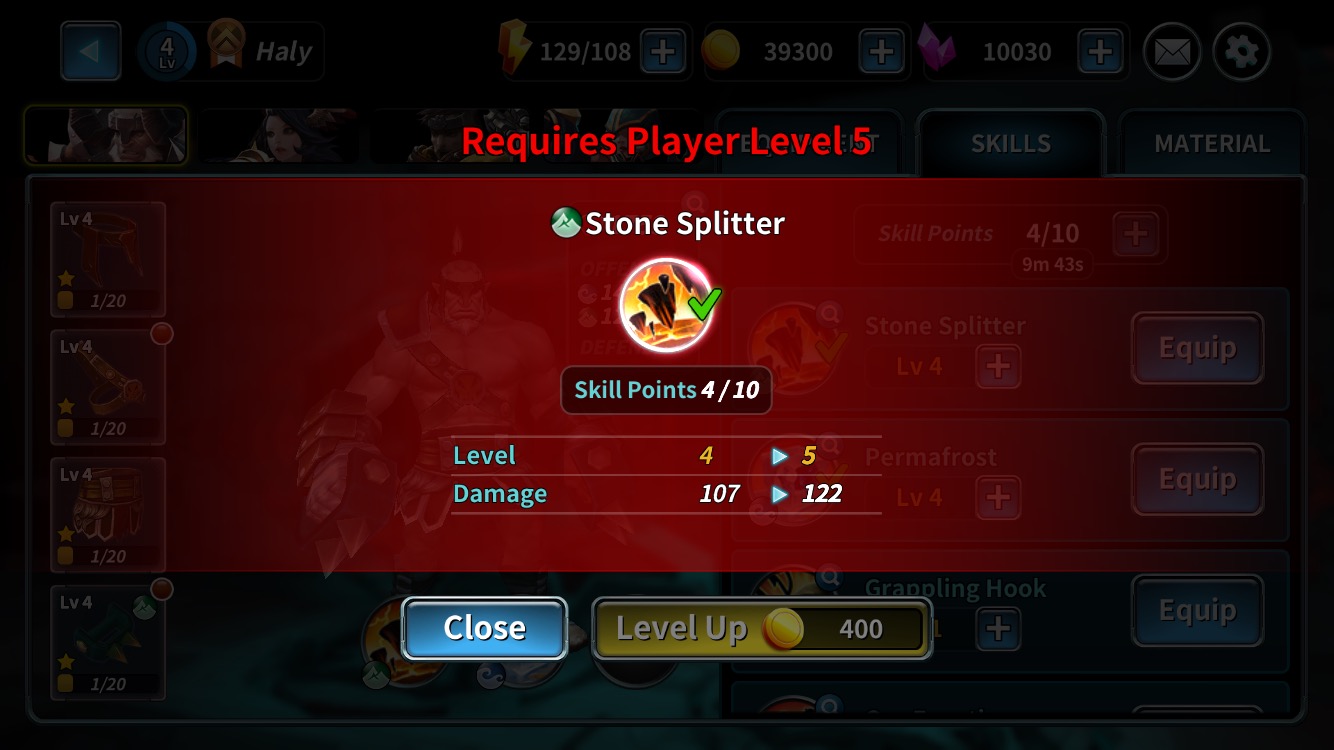 Character skills work in a similar way to equipment but they’re leveled up through a mixture of skill points and gold.

Skill points are obtained automatically over time but they max out at 10. After that, you’re simply wasting potential skill points. Use them as often as possible by sticking them towards your favorite skill. They’ll replenish soon enough.

The skill points pool isn’t exclusive to each character so those 10 points are to be distributed across all characters. Having said that, you want to focus on your favorite most of all.

Take a look at what skills are available to your character. You can only equip a few at a time so work out what works best for your play style. Aurok has a grappling hook move that drags an enemy towards him, and it’s great to use in conjunction with the stone splitter move that inflicts lots of damage. He also offers permafrost which freezes surrounding enemies for a brief time.

Aurok is pretty slow but he punches hard. If you’re after more speed, consider putting some points into Lucas. His defensive capabilities are pretty low but he’s super speedy, making him ideal for those keen to move fast.

Notice some of your moves are marked with a broken red shield? That means they’re unblockable. These are worth focusing on whenever possible, as they’re going to cause some pretty impressive damage in no time. 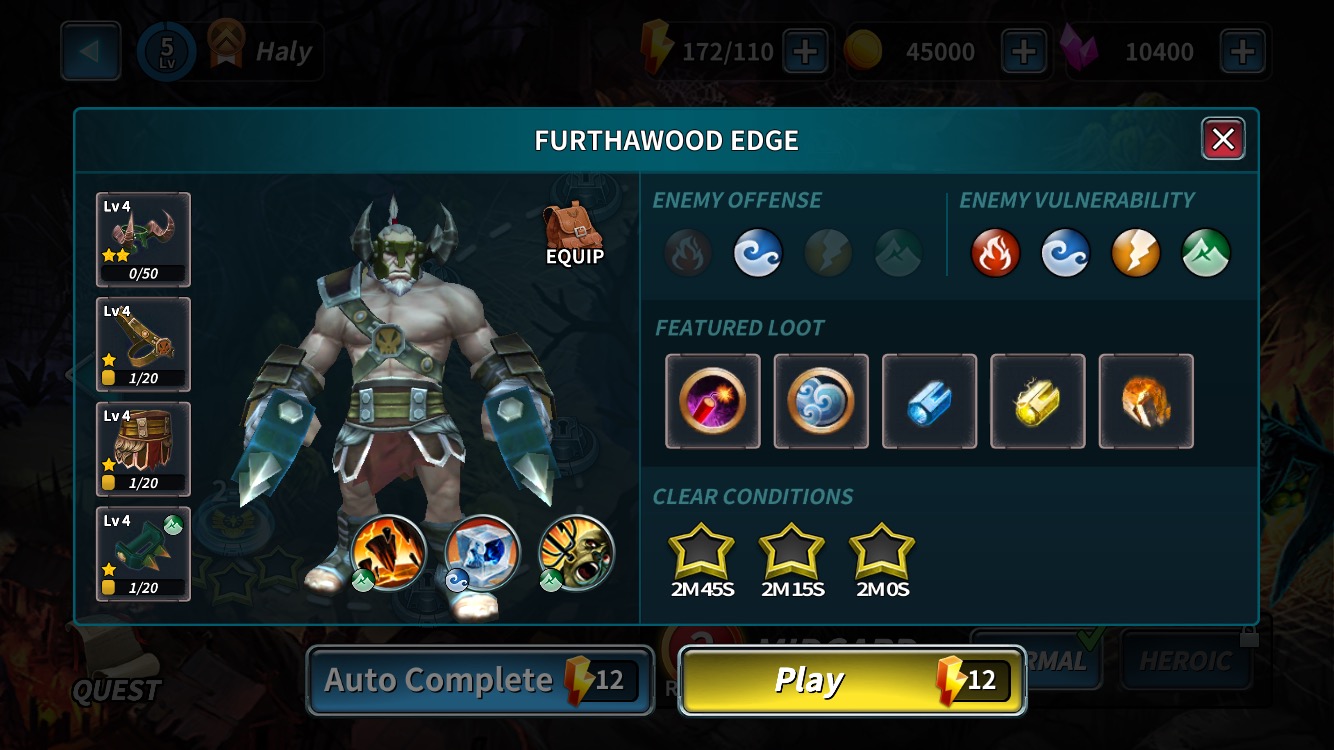 As is the way with so many lite RPGs, quests are a big deal here. Completing them is as easy as simply progressing through the story, equipping a few items, or leveling up a little. In every case, you’ll earn crystals which are ChronoBlade’s premium currency.

There are Daily Quests too but they don’t reward you with crystals. They do, however, offer up coins and experience which are still obviously very much worth pursuing for fairly little effort.

Many quests can even be completed through using auto-play so you don’t even have to put the effort in to gain some extras. This is a great method to utilize if you’re low on time one day but want to get stuff done. 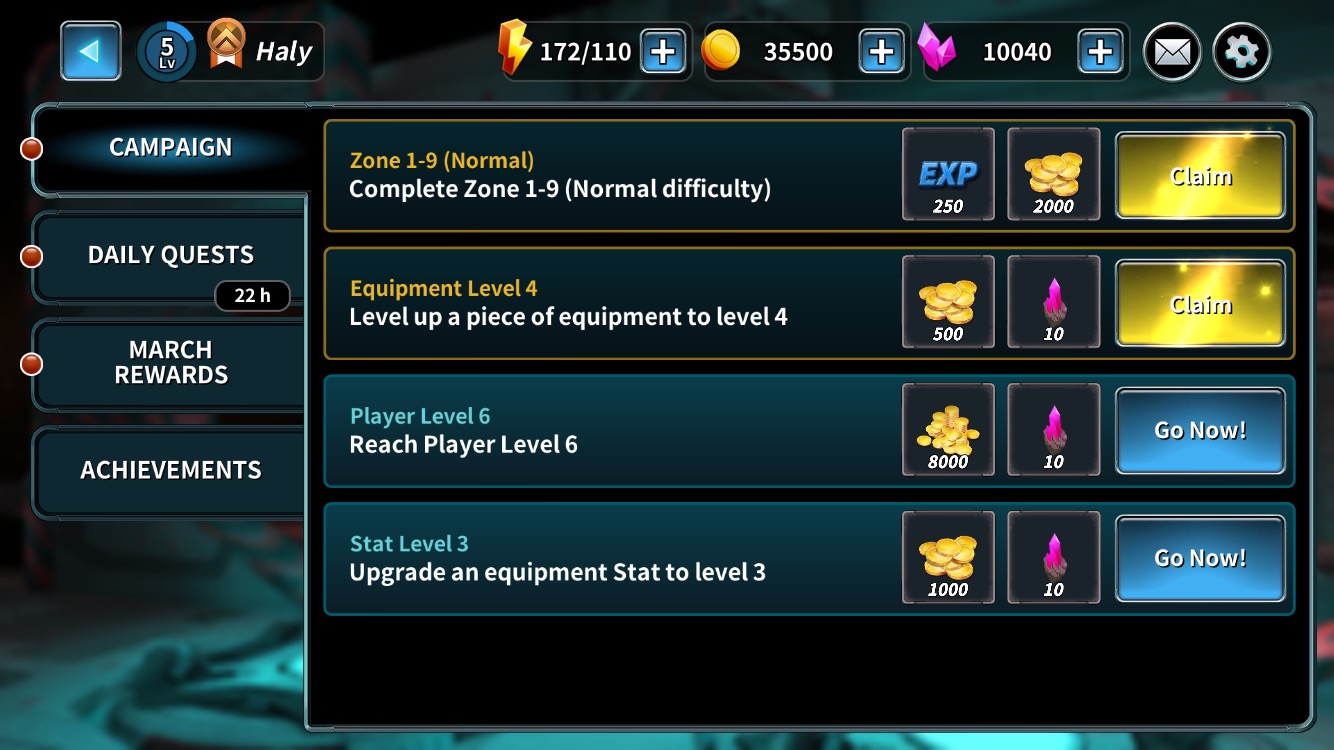 Grinding is a big part of ChronoBlade. You’ll need to return to earlier stages sometimes to gain some extras. You can enable auto-play leaving the game to do the hard work for you but you want to use this carefully. It still uses up as much energy as playing manually. The best time to go nuts with auto-play is when you’re logging out of the game for a while. Burn up all your energy in auto-play and while you’re AFK, it’ll replenish for when you return. Make sure you’re auto-playing on the last level you completed as the hardest level will give you the most rewards.

While you’re grinding, remember to look out for any red dots next to any of the icons. That’s ChronoBlade’s way of telling you there’s something available to upgrade or level up. It’s pretty good at handholding along the way.

Work towards level 8 as fast as possible. It won’t take you long. At level 8, you unlock Limited Dungeons, the PvP arena, and the Adventure Heroic mode. The latter is great for accruing plenty of extra bonuses as it works kind of like a whole separate area of adventure levels to tackle. It expands your options fairly substantially. 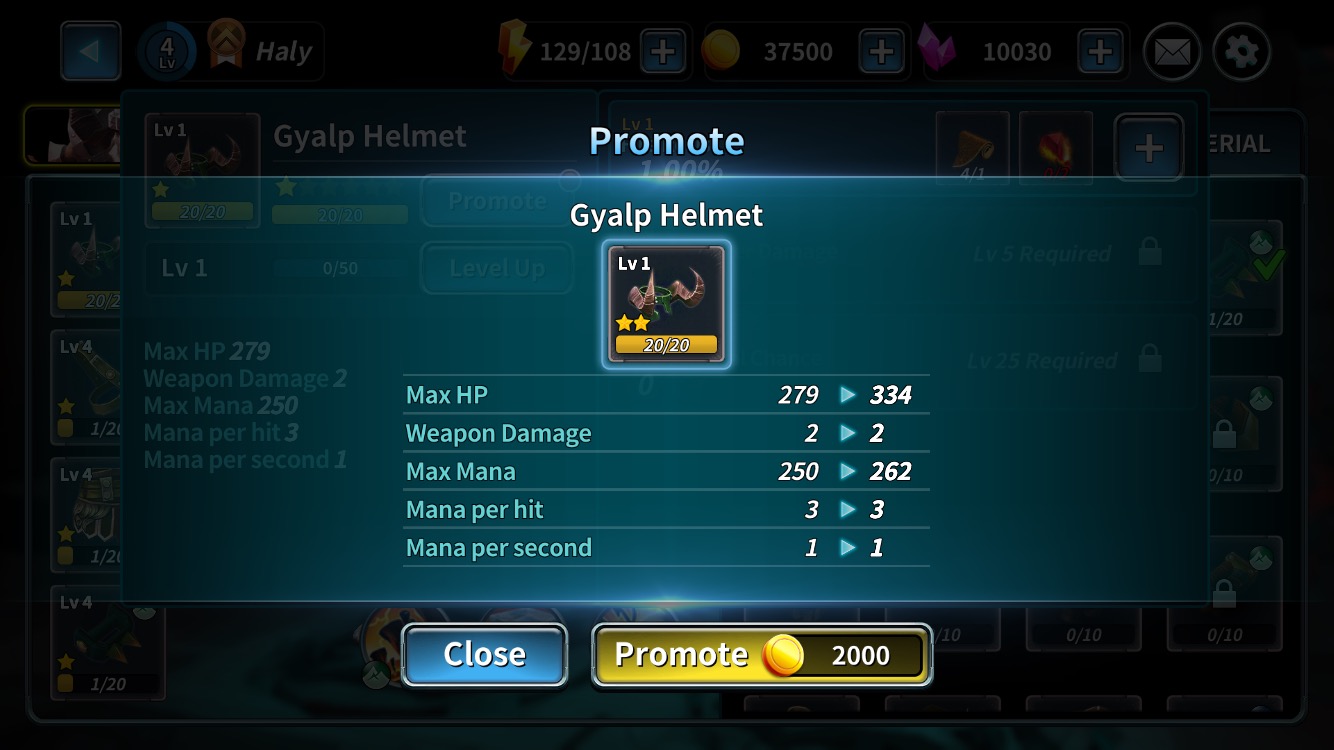 The store is evil, right? Full of things to tempt you into spending real money. Actually, no, not really.

Hop into the store and you can unlock a free chest every 5 minutes. You’ll gain some minor equipment shards, experience potions, or maybe some crafting material to increase your equipment options.

Alongside that is a crystal item chest. These are only available (for free) once every 24 hours. They’re worth logging in for as they’re pretty good for offering up crystals.

Oftentimes, there are special offers within the store that can be purchased with crystals rather than real money. They’re worth doing. You should earn a steady amount of crystals just by playing and completing quests. Packs include things like a large quantity of money, equipment shards and materials. Don’t be afraid to use your crystals for this kind of stuff rather than stockpiling them. This is exactly what you should be saving crystals for.

Alternatively, crystals are used for restoring your energy or continuing in combat, but this is a waste of such resources. Just wait it out for your energy bar to restore. Don’t use crystals on it.

? Like this article?We pride ourselves on delivering quality, long-form articles like this one instead of the SEO-driven click bait that is slowly taking over the internet. Unfortunately, articles like these rarely generate the traffic (and as a result, the ad revenue) of listicles, cheat guides, and other junk.