While it’s true that not every pre-existing genre of game has adapted comfortably to touch controls, I feel like the puzzle genre has benefited tremendously from them. In some cases, there are puzzles that just wouldn’t work properly with other methods of input. Other titles benefit simply from the improved tactility that comes from using your fingers directly on objects in the game. Granted, you’re just mushing your finger against a piece of smooth glass no matter what the game is like, but the really great ones line up sound effects and visual flourishes to create the illusion that you’re actually playing around with solid pieces.

Dissembler ($2.99), the latest from Boson X ($2.99) creator Ian MacLarty, could easily be played with standard control inputs. In fact, you can do just that already, as the game has been simultaneously released across a handful of platforms. And you know, I think it would be good in any case. It’s an inventive puzzle game that works quite well, with a pleasing difficulty curve and just enough twists along the way to keep you engaged without having to go overboard on gimmicks. But I really believe this game is best when you can put your mitts on it directly, flipping the tiles with a flick of your finger as soothing clicks and clacks accompany the movements of the pieces. 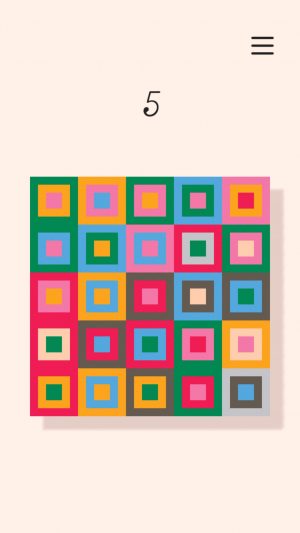 There are a few different gameplay modes in Dissembler. The meat of the game is found in its Puzzles Mode, which challenges you to find the solution to more than 120 hand-crafted puzzles. The basic set-up is that you have a number of colored squares arranged into a single board. You can swap these squares with one of their neighbors if and only if doing so will cause three pieces or more of one color to touch each other. The matched pieces will disappear, as they are wont to in games like this, leaving you with a slightly misshapen board to deal with. Your ultimate goal is to completely clear the board of every piece. It sound simple enough, and on the earlier boards it is. But things get complicated quickly, and you’ll have to think carefully about each move and how where it leaves the remaining pieces.

Once you’re familiar with that, the game starts throwing a couple of curve balls your way. Pieces will start having multiple layers that need to be stripped away one a time, or tabs that limit the pieces they can match with. When these gimmicks combine with larger boards, more colors, and more complex arrangements, Dissembler starts to get some real bite to it. You always need to be thinking a few moves ahead and keeping a clear eye on where you think your last move will have to be. The nice thing is that in spite of the challenge, Dissembler is fairly low-pressure. You can take back as many moves as you want, the aesthetics are calming, and the game is kind enough to always have a few open puzzles for you to work on in case you get stuck.

The second mode is the Daily Mode, which works just like the Puzzles Mode but delivers six fresh levels to you each day. As in the main mode, these puzzles grade up in difficulty as you work through them, so the first puzzle of each day will always be quite easy and the last hair-pullingly difficult. If you get stumped by any of them, the solutions are made available the next day. That’s just so you can kick yourself for missing something that was obvious in hindsight, really. Kidding aside, being able to see the solutions is quite helpful as you’ll almost certainly run into a similar situation again down the road. 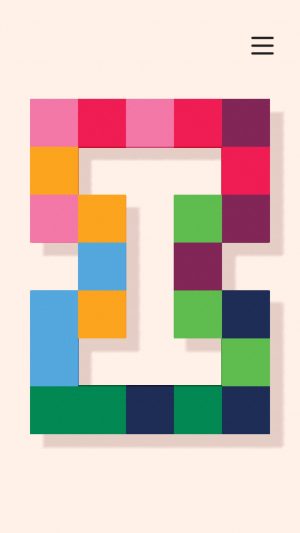 Finally, there’s the Infinite Mode, and this one works a little differently from the others. After choosing one of two difficulty settings, you’ll be presented with a square board made up of multi-layered tiles. Once again you’re swapping the pieces to make matches, but here matched pieces don’t disappear. They simply peel away their top layer. Your goal is to make as many matches as you can. If there aren’t any matches possible, the game is over. In this mode it’s extremely important to pay attention to the second layer of the pieces. You have all the time in the world to make each match, so there aren’t many excuses for painting yourself into a corner. Your best scores here, provided you’re playing on the higher difficulty, are tracked on a leaderboard in Game Center, making this a fun distraction once you’ve finished all of the available puzzles. It’s not my favorite of the modes, but I’m glad it’s here.

The presentation is clean and simple, with light music playing in the background and nicely-animated pieces. The sound effects are great, making it feel like you’ve really got a physical contraption in front of you. I was happy to see that the game includes a colorblind mode, something too many puzzle games leave out. The wildest thing is that the game is just a single purchase. No IAPs to unlock stages, no buying hints, no incentivized ads, and no stamina meter or anything resembling that sort of chicanery. It’s just a good, pure puzzle game available at a fair price. The included puzzles take a while to complete, and the daily puzzles keep on delivering more bang for your buck.

Dissembler is one of those puzzle games that just feels good to play around with, but it backs that simple joy with a solid spate of puzzles and gameplay modes. Unlike this developer’s previous games, I think this one is welcome to players of a variety of skill levels, too. If you’re looking for a mellow puzzle game that will help pass the time without making extra demands on your wallet, you’ll likely be quite pleased with what Dissembler has to offer.