Cooperative singleplayer puzzling is what Death Squared ($5.99) provides in its iOS release. It’s not perfect, and has a few annoying factors and humor that doesn’t really break a lot of boundaries, but it provides some fun puzzles to solve and a game design that works perfectly for either playing solo or with a friend on the same device. I’ve played Death Squared in some early builds in the past couple of years, so I was curious to see how it would come to iOS, since what I played was very much driven by cooperation with another player. However, the final release makes the story mode something that a single player can play by themselves. The puzzles don’t require a lot of simultaneous movement, they just requre that players be able to mentally deal with two different characters. 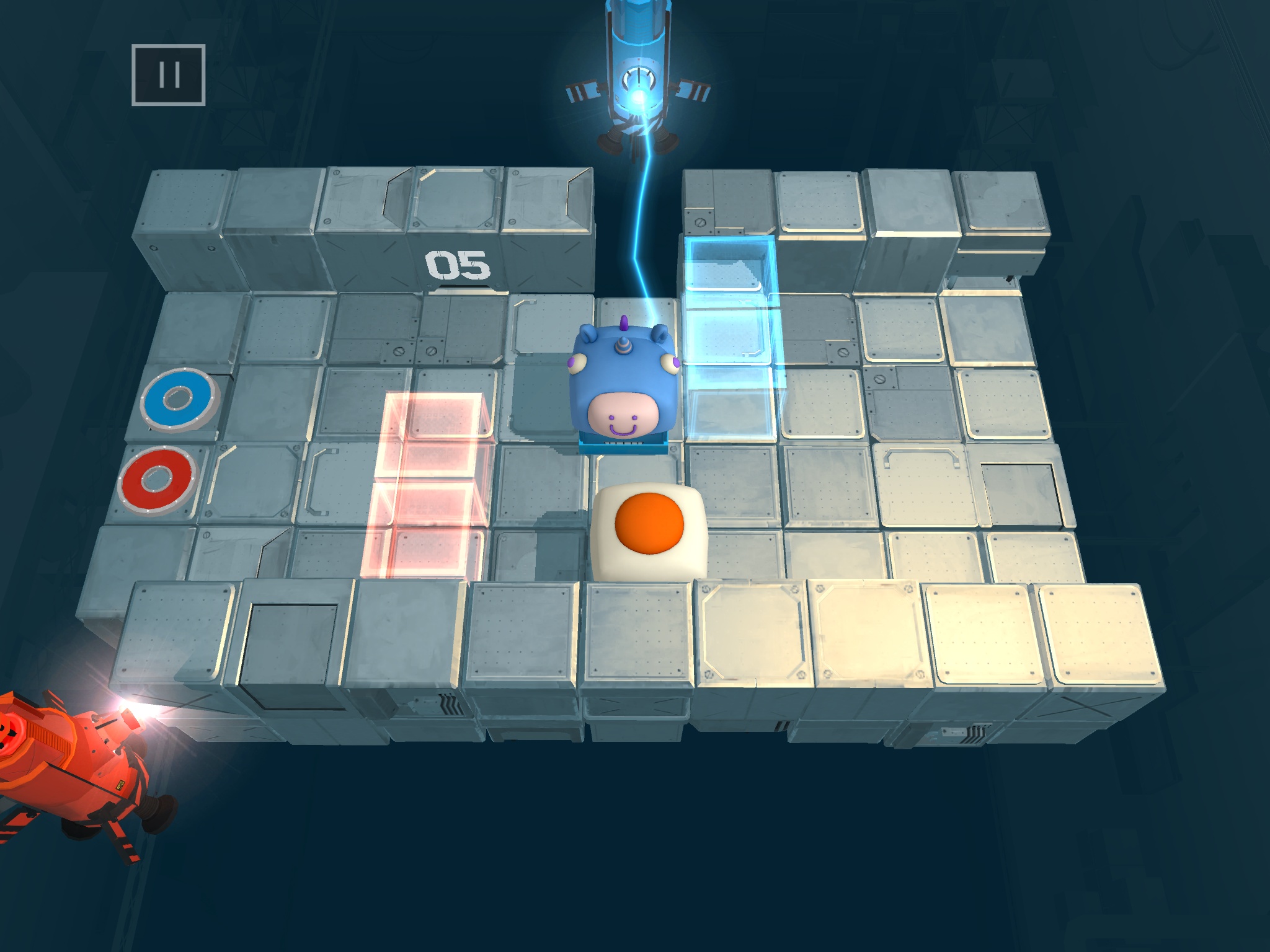 Because the game is just controlled with two joysticks, another player can just take over on the other side of the screen and start playing. This means that some puzzles might be easier with another player to help take care of tasks that are otherwise tricky for one person to coordinate with themselves. But then the issue comes in where if one person has a plan, they have to communicate it effectively to their partner just how to do it. Remember Portal 2‘s multiplayer? It’s kind of like that, just with fewer portals. And this time, you’re the companion cube.

Death Squared‘s combo of solo and multiplayer is an interesting approach to releasing the game on mobile, because it effectively takes the same game and makes it into two different experiences in one title. While knowing the solutions would help, you could theoretically start from level one with a friend and get a different experience of the exact same content going forward. It is also the ultimate pick-up-and-play multiplayer: just have someone take over the other virtual stick! 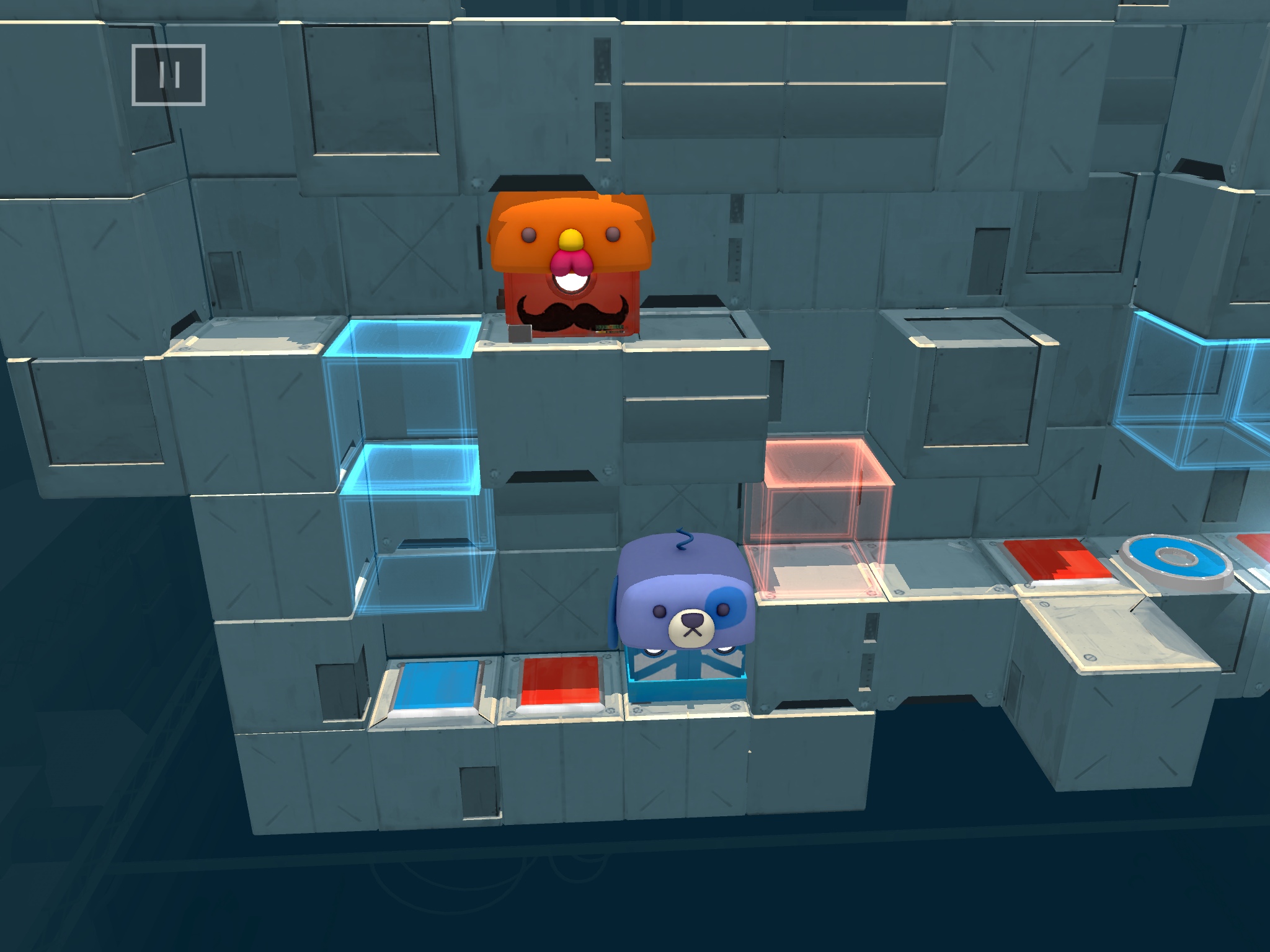 The mobile version makes an odd decision to have the left joystick control the red character, and the right joystick control the blue character. This runs counter to the conventional custom of blue = left, red = right For example, the left Joy-Con on the Nintendo Switch is blue, and the right one is red. SMG Studio throws this tradition to the trash, and turns this around! It winds up making the single player just a bit more mentally confusing than it should be. This obviously is less of an issue in multiplayer, which is a same-device setup.

The game does boast a Portal influence, as the game is full of irreverent dialogue between the OmniCorp employee David and IRIS, the OmniCorp AI who is helping to evaluate the test subjects. He’s a lazy office employee who would rather not be there trying to analyze two AIs trying to figure out different puzzles. IRIS is a digital AI, but at least it comes with a reassuring voice. The game is pretty amusing, though the game won’t exactly shock you with a lot of unsuspecting humor.

One downside to Death Squared‘s whole setup is that because all the movement is analog and not locked to a grid, you can fall off due to moving not perfectly. I’ve gotten zapped by lasers due to my robots being just slightly close to the edge of a block that was supposed to protect them, which the game recognized as enough to get zapped by hot laser death. Especially when the puzzles require several steps and often careful movements, it can be frustrating when a slight mishap goes against the player. The puzzles where lasers track the robots’ movement are some of the most frustrating, because they once again deal with tight angles, and require the player to act very carefully to make sure they don’t get zapped.

Still, the challenge does mean that solving these puzzles is very releiving and satisfying. And it’s fun to coordinate the robots together, making the perfect moves and figuring out just how to navigate these levels effectively enough to solve the puzzles. When it all works, it feels amazing. You get 80 levels in total in the Story Mode, plus an extra 30 or so in the Vault mode that unlocks once you beat Story Mode. Update: version 1.1, released shortly after this review, fixes the save game issue. 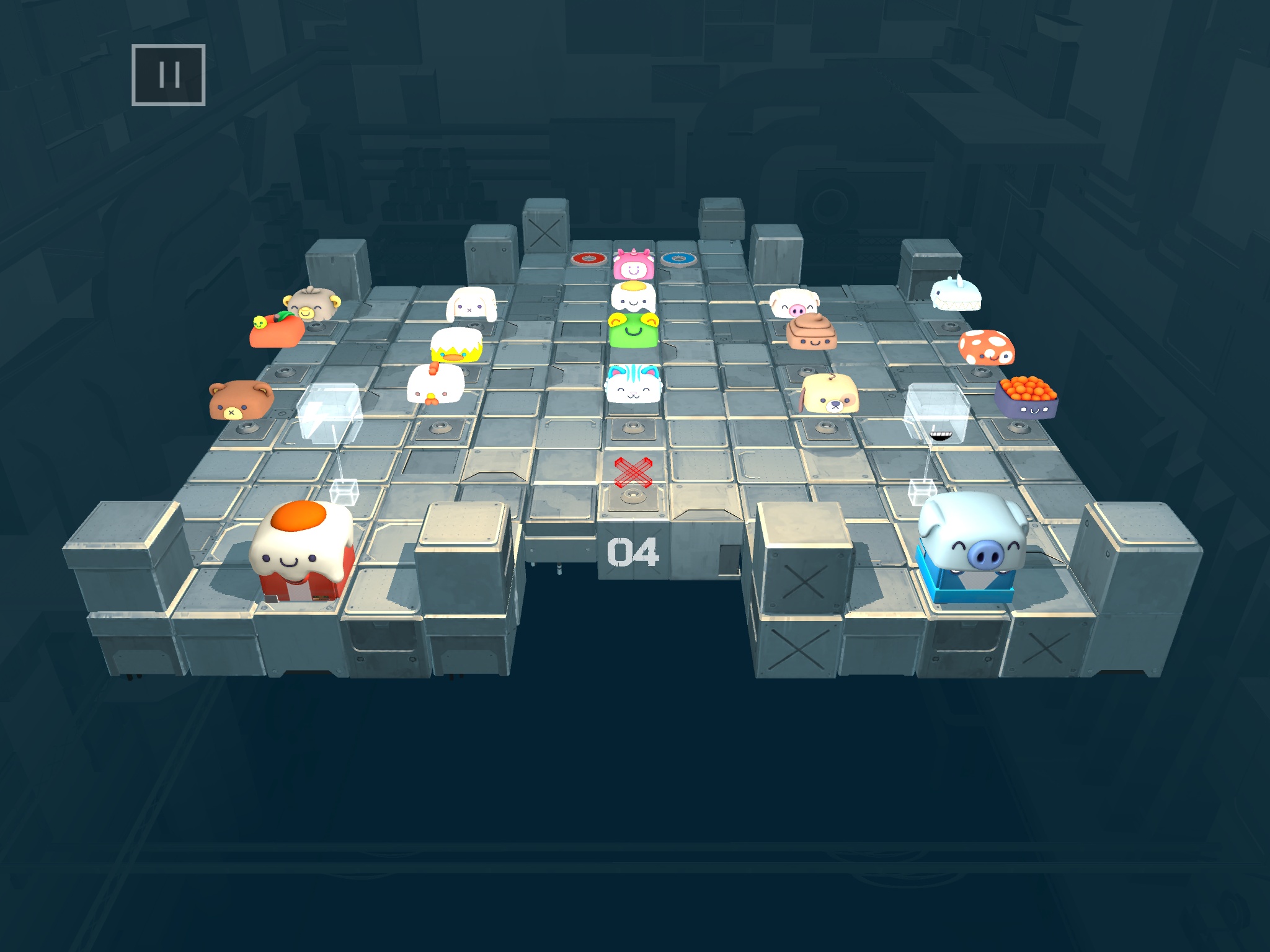 The game has great character to it. The visuals are better than they need to be for a game with minimalist environments and simple cubic robots. The hats and masks go a long way toward making them feel more like characters and not boxes in a maze. One little touch I particularly enjoy is that there are pipes running along the walls and bottomless pits, and if a robot hits one of the pipes while falling, they’ll bounce off of them. It shows that there’s some attention to detail to making this feel like a world. Even if some of the test subject humor is to be expected given the conventions of the genre, there are still amusing lines.

Is Death Squared on mobile the first version of the game that I’d pick up? No, I’d probably go for one of the console versions first, particularly the Switch version, because Death Squared is at its best when playing with a friend. Or three, as the levels that support up to four players are not in the iOS version. But, the core concept is great, and the game has a lot of cool moments. If you’re gonna play the game solo, or maybe want to share your iPhone or iPad to play together, you can do so.