Hero Hunters (Free) is the latest team-based RPG shooter to hit the App Store, so it’s keen for your attention. From Hothead Games, developers of games like the Kill Shot franchise, it’s quick to learn and enjoy (at least for a little while), but it’s also keen for your money.

Throwing more Pay to Win elements, along with loot boxes and gacha style collections, than you could shake a sniper rifle at, here are some tips on how to maximize your time while minimising the impact on your bank balance. 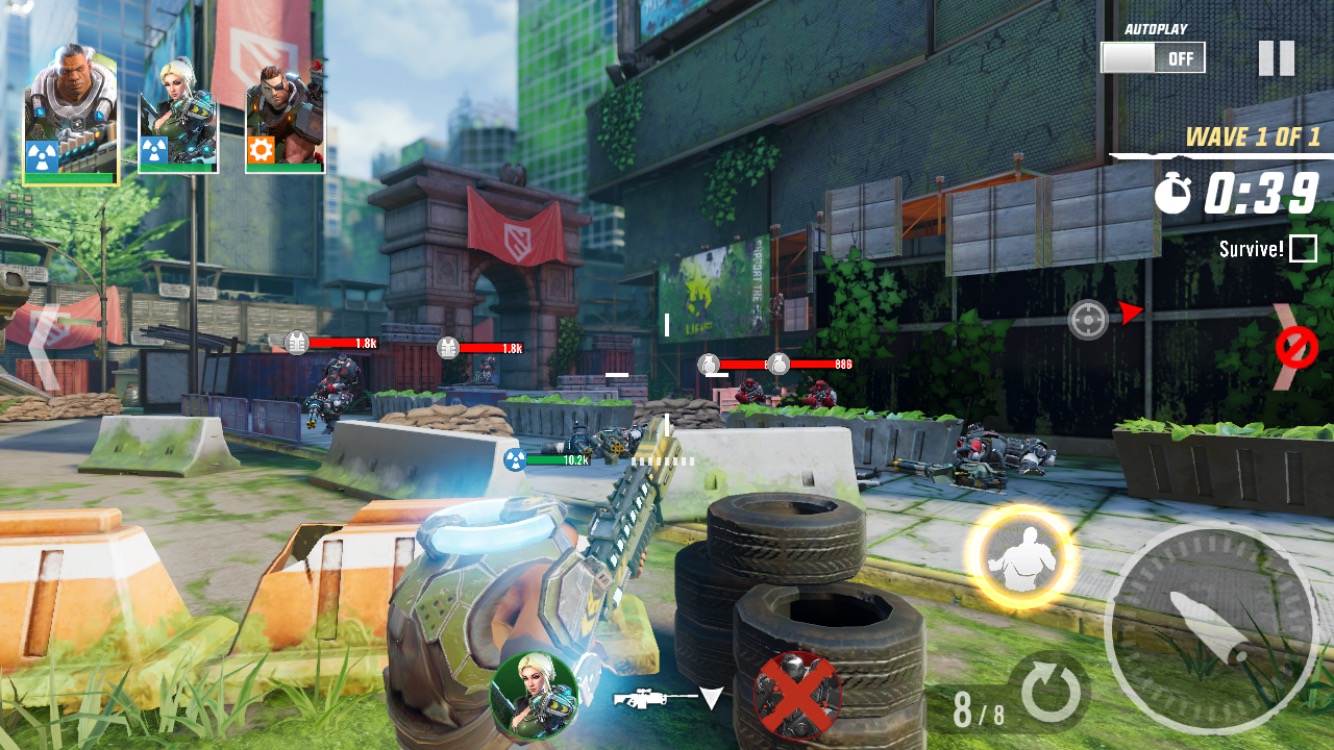 That’s actually counter productive as it leaves you very open to attack. Keep moving whenever possible. Keep an eye out for when a grenade is coming your way. It’s indicated by a growing red circle around where you’re standing or taking cover. Be prepared to dodge out of its way by swiping to the side.

When you’re looking up from cover to fire at an enemy, you need to manually back down. Don’t forget to do this otherwise you’ll take unnecessary damage frequently.

Hero Hunters is pretty keen to show you who you should be attacking first. Generally, the bigger the enemy, the stronger they are. Alternatively, some come with an ‘Elite’ label above their head. Focus your efforts on taking these guys out first. Is there a healer up against you? Focus on them before anyone else otherwise they’ll heal up anyone you shoot first.

Aim for headshots, while you’re at it, for maximum damage.

Use your skills wisely

Each character has their own special skill. For instance, Nightingale has a healing ability in the form of Heal Pulse, while Butter has his Draw Fire skill that works as a form of taunt. 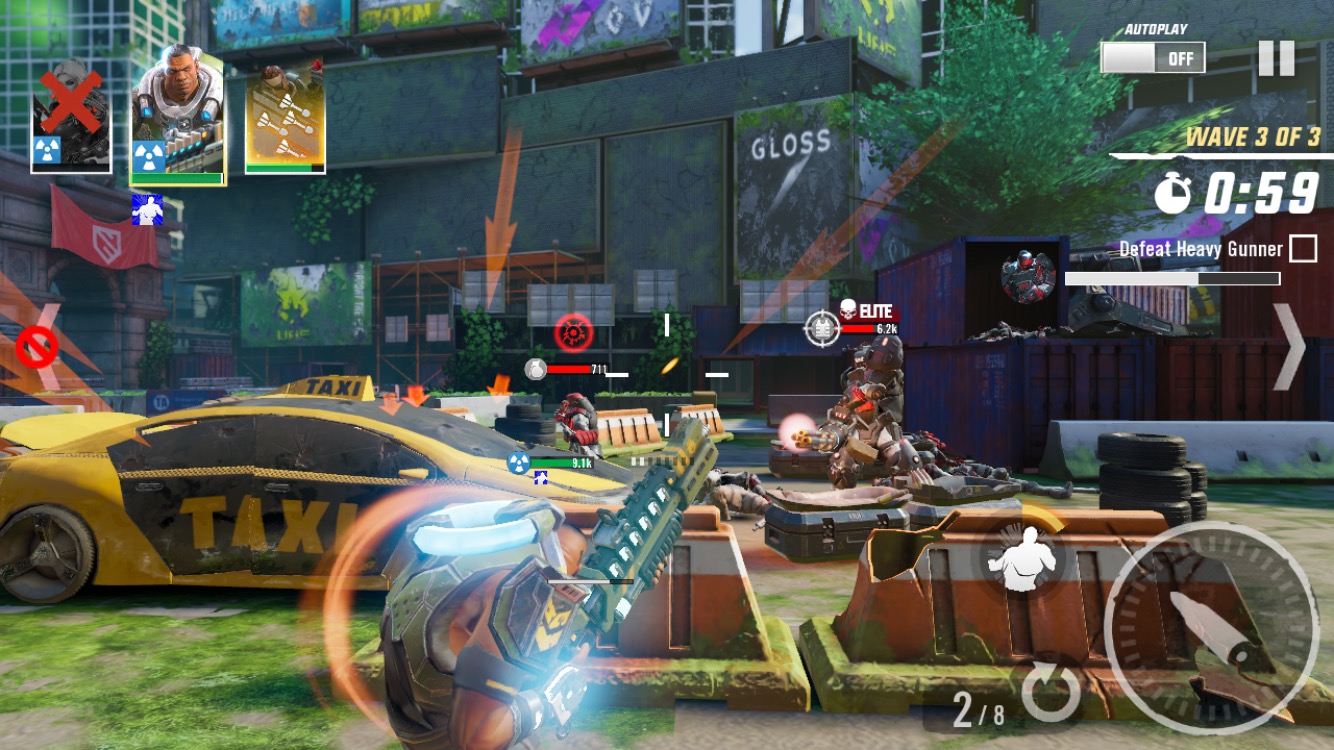 These take time to charge, and that amount of time varies depending on the character. Sure, Mandrake’s Tomahawk has a fast timer on it so it’s ideal when you want to quickly interrupt your enemy’s skill attacks, but Butter’s Draw Fire takes time.

Only use them as and when needed. The worst case scenario is when a hero desperately needs healing and you’ve just wasted Nightingale’s Heal Pulse on someone that wasn’t running that low to begin with.

Each skill can gain additional charge for every time you hit an enemy with your basic attack. The more times you hit them, the quicker it recharges, so focus on your accuracy. The rest of your AI controlled squad will do the same but they’re less accurate, so this is the perfect time for you to take things into your own hands. 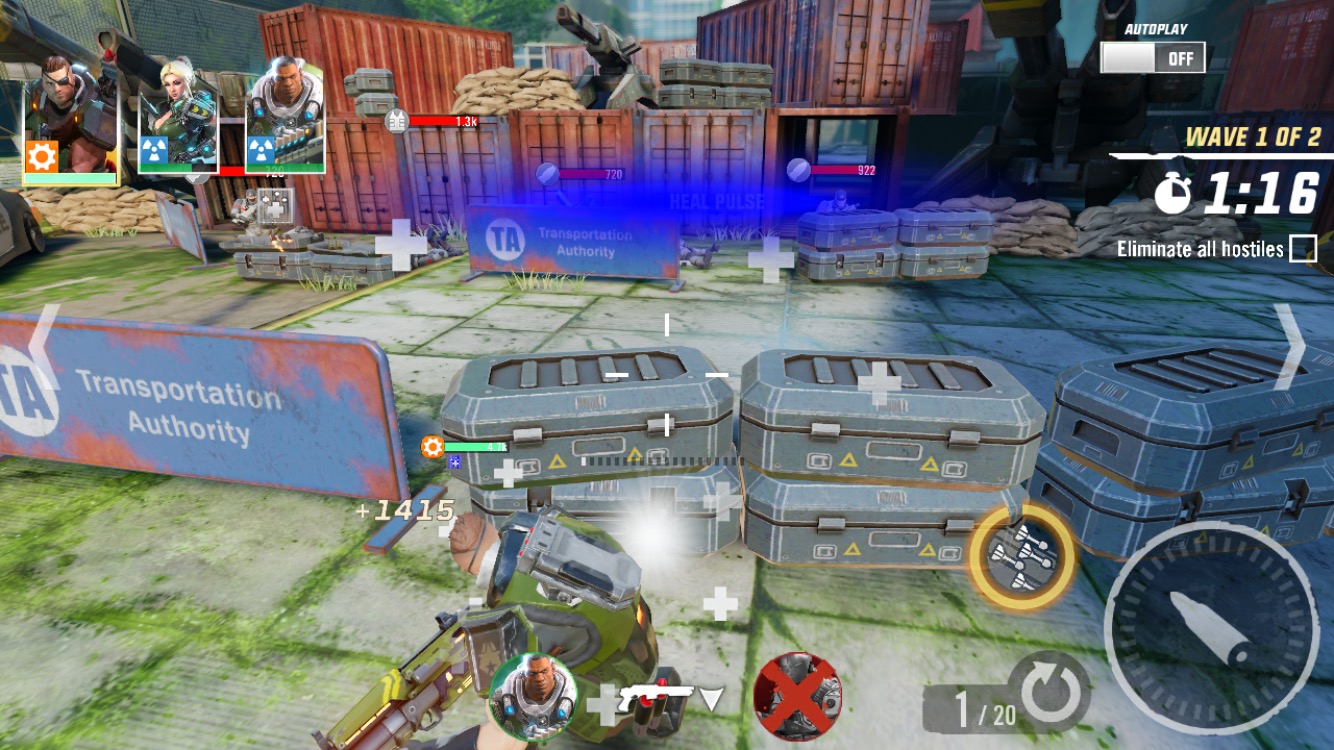 Typically, offensive skills recharge fairly fast on their own while utility and defensive skills take longer. Get to know exactly what’s going on with your favorite bunch of heroes.

Most of the time, you want to be controlling heroes that have utility and defensive abilities so that the AI can focus on the offensive stuff. It’s the most effective combination as otherwise, the AI is just going to go nuts with stuff that could have done with being saved for a more critical moment.

For that reason alone, you want to always have a healer on your team.

The more you develop your team, the more options become available to you. Sometimes, you’ll have a hero with a gold skill. These are what you’d expect – skills that are far more powerful than the usual choices. Characters like Keel turn into a far more powerful healer than Nightingale, thanks to their healing based gold skill.

Always focus on using and developing heroes that have valuable gold skills. It’s expensive work but it’s going to make you far more powerful than focusing on the lesser skills out there. 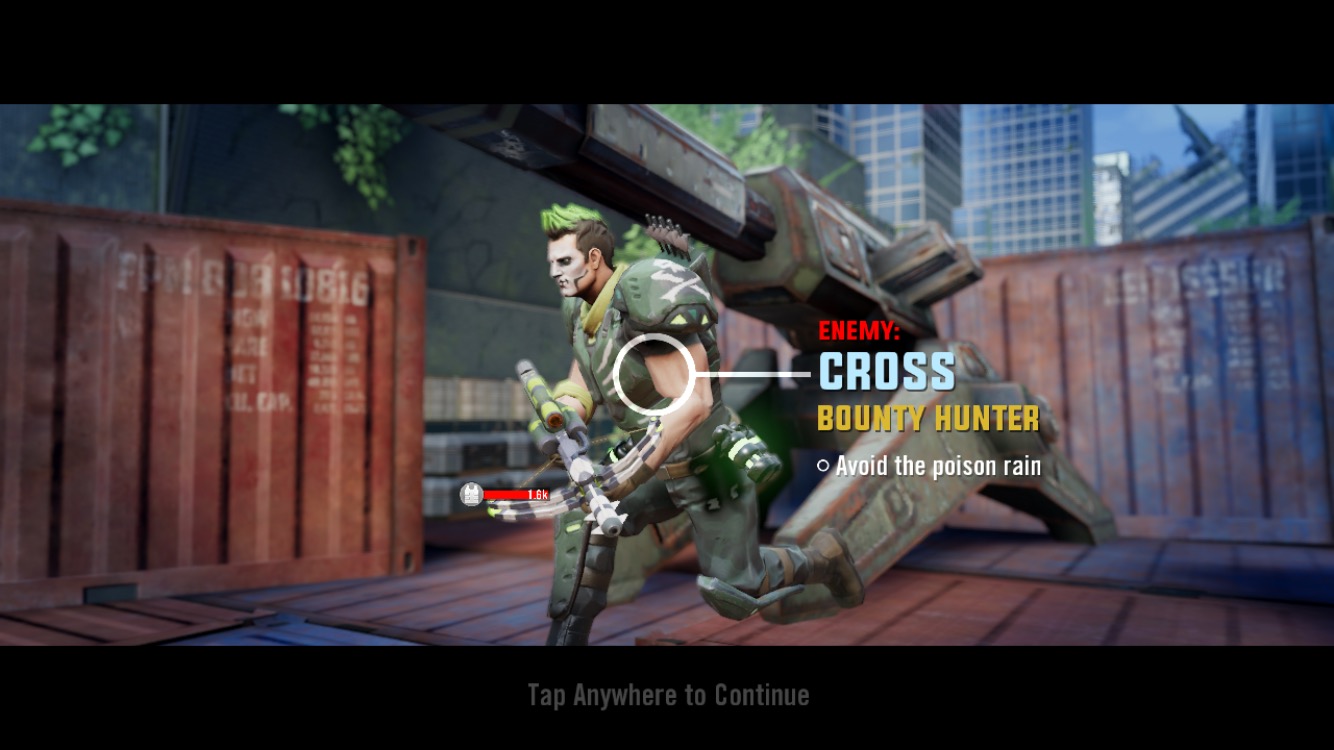 Hero Hunters isn’t just a team based shooter, it’s also got some basic RPG elements. Pay attention to the elements of the enemies you’re shooting. It’s basically like Rock, Paper, Scissors with three elements – Biochem, Energy, and Mechanical all playing a role.

Green arrows above their elemental icon means you’re dealing bonus damage, while red arrows mean you’re inflicting less damage. Prioritize according to what works best. The AI won’t do this so it’s down to you to focus on how best to tackle the situation. An elemental advantage can be pretty significant.

The importance of your power level

Each mission provides you with a recommended level to suggest what your chances are. You can boost your power level through numerous means. 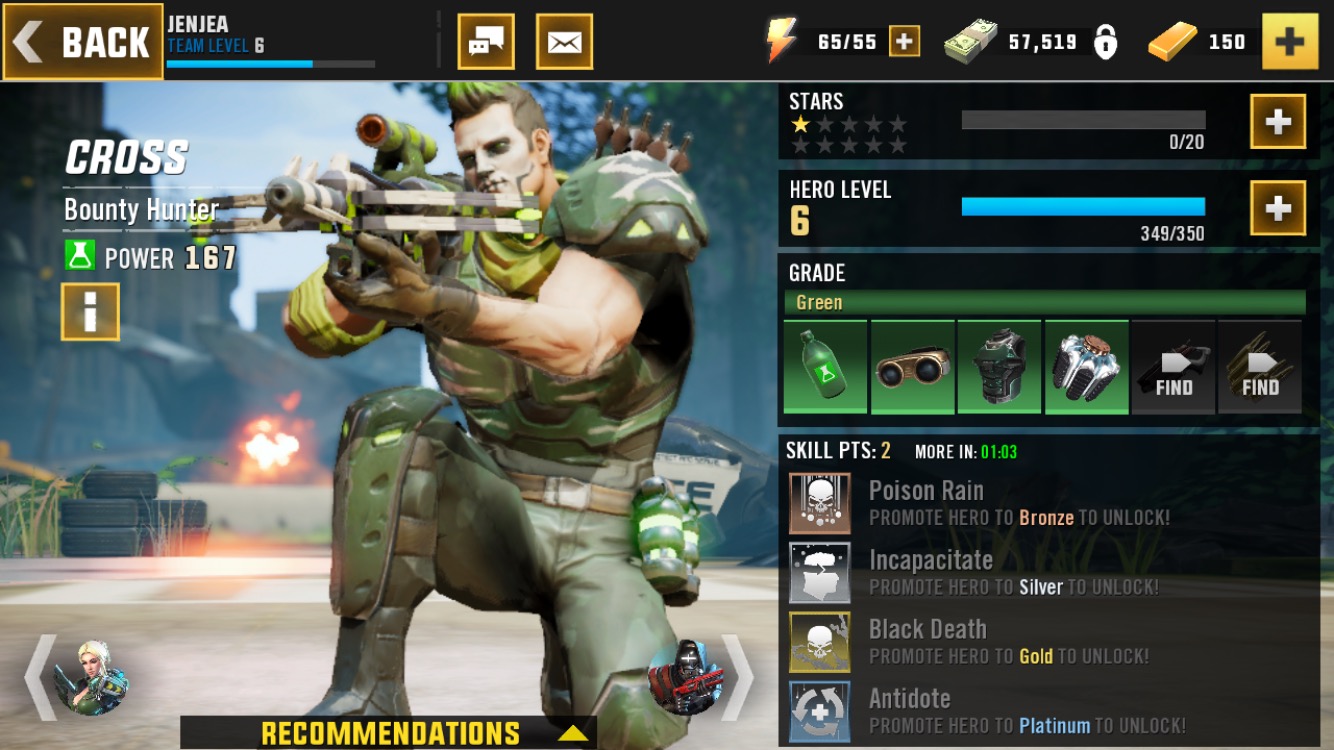 The gear you equip your heroes with helps and is very easy to utilize. Each hero has six gear slots and you can hit ‘Equip All’ to get the best stuff loaded up fast. Once you find all their gear, you can promote them which sacrifices the stuff but gives the hero a permanent stat boost.

Another method is by simply levelling up your heroes. Each time you participate in a mission, you earn experience. Predictable, huh? Grinding out those missions can make a massive difference though. But remember – you need to work on your team level too otherwise your individual heroes are capped at that number.

Like so many games, Hero Hunters is keen to throw achievements and daily quests at you. Check them out and focus on completing them. Daily quests are particularly useful as they’re really pretty easy to finish off. 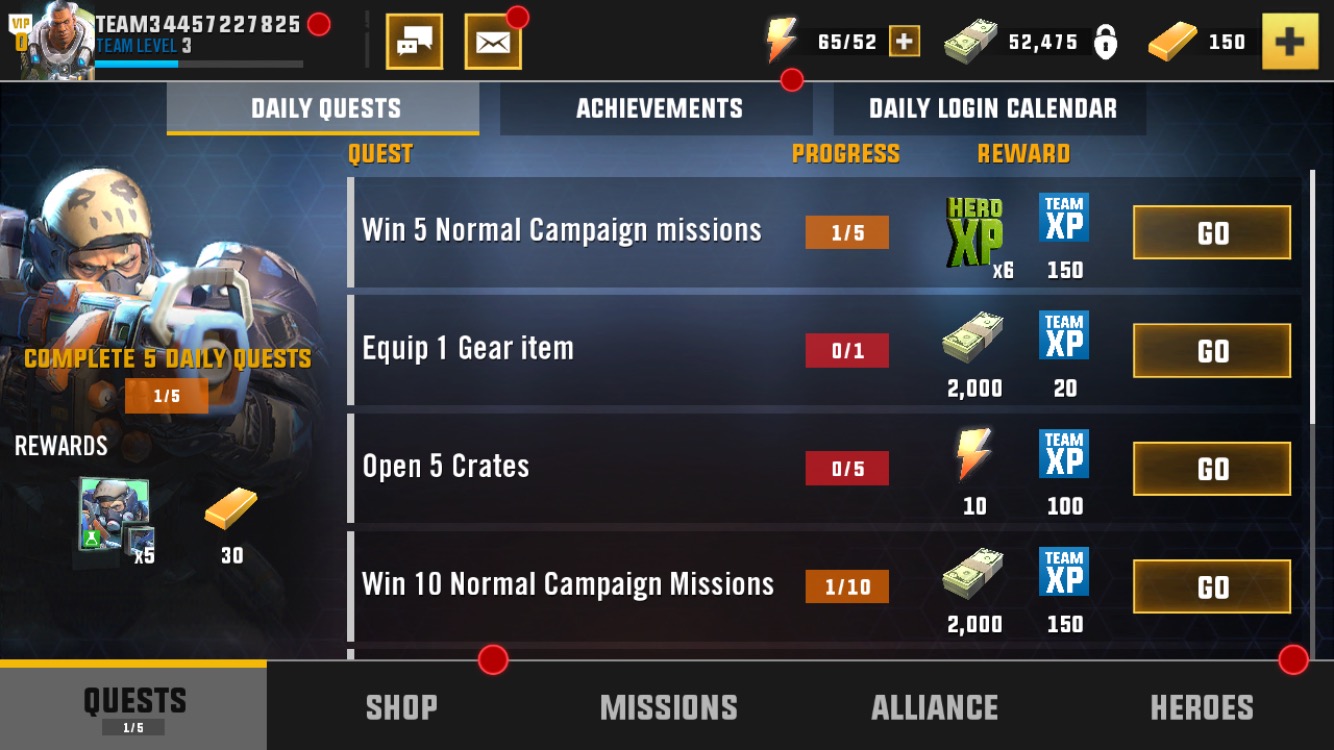 Oftentimes, they’ll be things like opening a set number of crates or completing a few missions. You won’t have to go out of your way to complete them as it’ll just come naturally. Rewards typically come in the form of extra stamina (so you can complete more missions), gold or team XP.

Gold is mostly used to buy new heroes, via opening hero crates. You can use it to buy items from the Black Market too, along with using it to exchange for stamina. You’re best off focusing on new heroes rather than bothering with additional energy though.

Stamina/energy refreshes at a rate of 1 point every 3 minutes so be patient unless you’re incredibly gold rich which isn’t going to happen often.

Bucks are used to upgrade skills as well as evolve your heroes. You gain them for completing missions with more coming your way if you’ve done a great job and 3 starred the stage. Pick your skills wisely like we discussed earlier.

Quick Win Tickets are one of the earliest rewards for logging in each day. These let you instantly gain the loot in a stage, providing you’ve already got 3 stars in it. Use them often. There’s no point stockpiling and they’re essentially free stuff for minimal effort.

Hero Hunters loves the loot box model but it does dish out some freebies fairly easily. 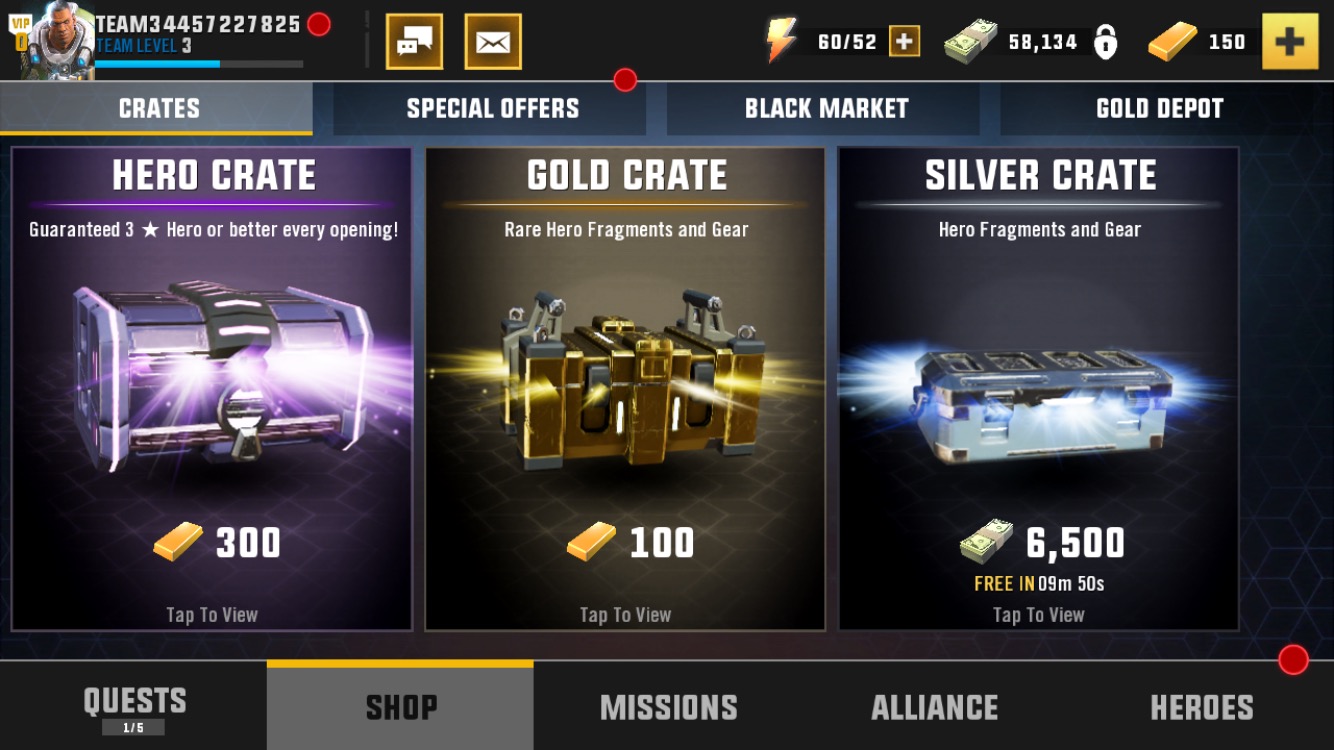 Trying out the other modes

PvP unlocks early on. You’re awarded for kills in it, gaining PvP gems that can be used in exchange for hero fragments, thereby boosting your team. It doesn’t cost any stamina to participate in PvP either so it’s a great mode to delve into when you’ve used up all your stamina for now. 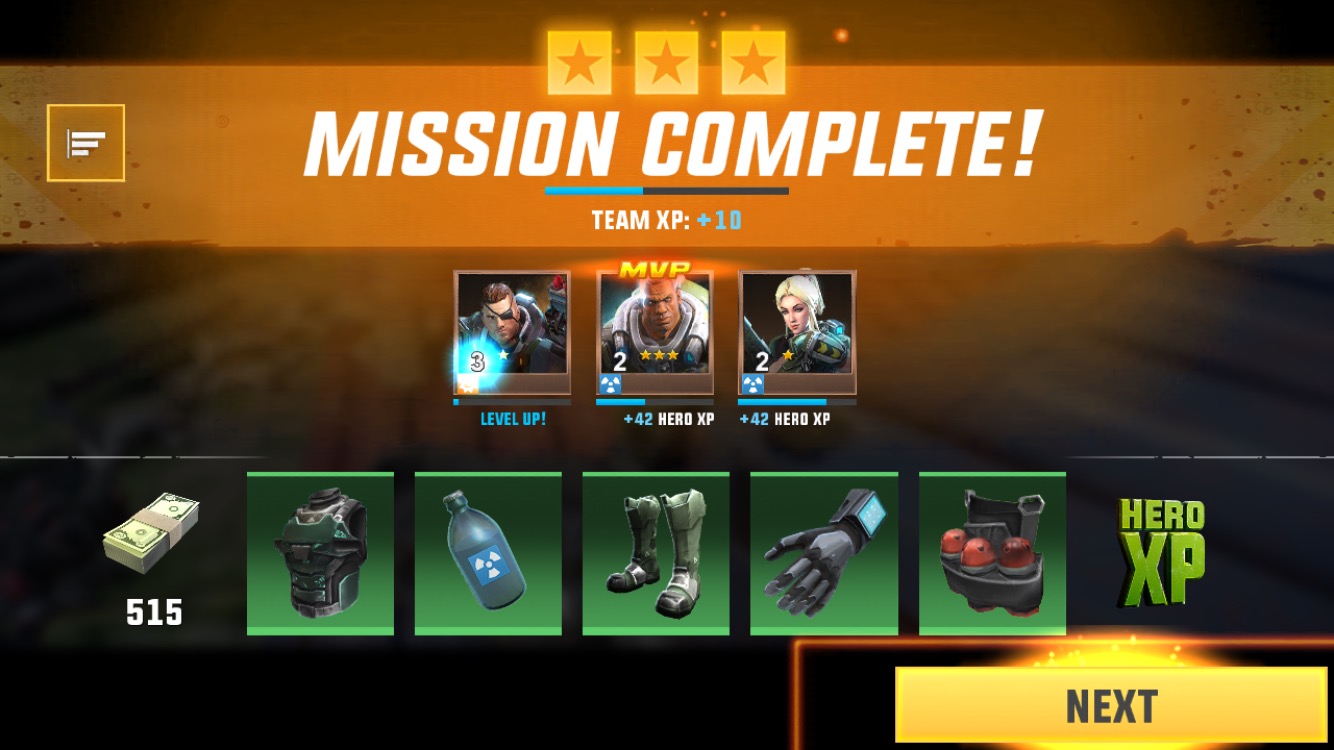 Gauntlet mode opens up once you’ve wrapped up the second set of missions. It’s a good way to earn plenty of Gauntlet gems which are exchanged for all the other good stuff, providing you know how to tackle it well. It’s a little different from the campaign mode.

Remember that skills retain their charge between missions so, sometimes, you’re better off holding back on your skills until the start of the next mission. This’ll only work with the character you’re controlling though as the AI auto-deploys skills whenever possible.

Heroes can’t be used in multiple sectors within Gauntlet, so you want to complete each sector with as few heroes as possible. Don’t waste your heroes needlessly. Keep your team balanced but efficient. And always leave your most powerful heroes for the end.

Eventually, you’ll unlock Hard mode in the campaign and that’s another great way to gain stuff. Three starring a stage gets you 20 gold which adds up really fast.

In all modes, if there’s a boss to fight, you want to target that guy. Usually, the level ends the moment you defeat them, meaning no need to kill all the other enemies.