Final Fantasy games on mobile tend to fall into one of two categories.They’re either expensive-for-mobile ports of the console classics or free-to-play exercises in nostalgia, pulling characters together from throughout the series in the hopes that people will shell out money to chase their favorites. Dissidia Final Fantasy OO  (Free) belongs more to the latter category, but it’s also decidedly less cynical than you might expect and could even rate as a real treat for those who simply can’t get enough of the franchise.

Though it shares the first word of its title with the console fighting game Dissidia Final Fantasy NT, OO (which stands for Opera Omnia, in case you need that info to win a trivia contest sometime) goes its own way in terms of gameplay experience as a traditional RPG and tells its own story to boot. The backstory here involves warring deities, who have built their own world and forces warriors from many other realms to fight nonstop. Finally worn out, they discover a safe haven of sorts only to find that mysterious portals called Torsions are letting in monsters that threaten to spill back into the connected worlds and destroy everything. The less nasty of the two gods, Materia, charges one Mog with the task of rounding up heroes of light to turn back the monsters, seal up the Torsions and set things right. 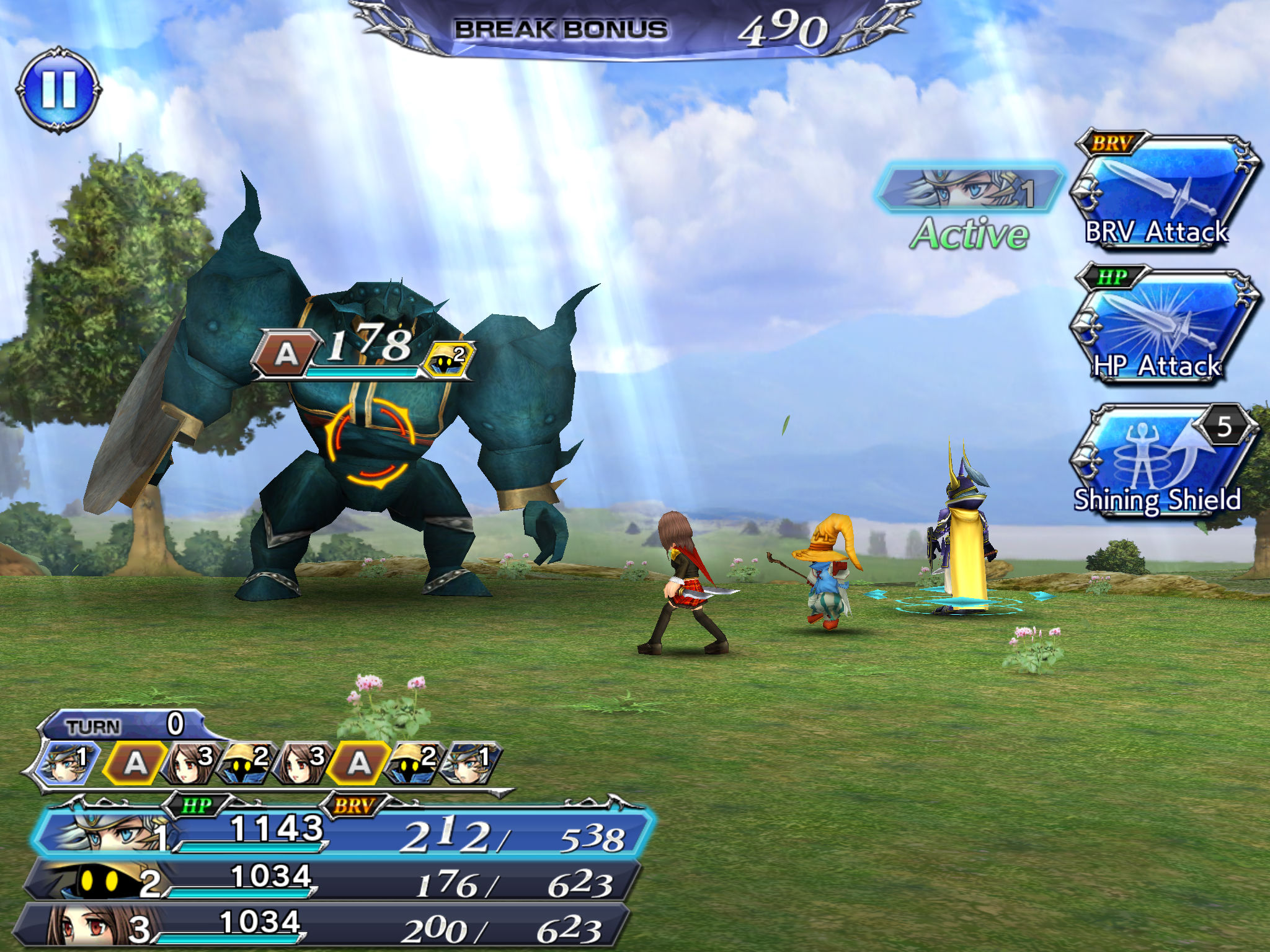 It’s actually a pretty good setup to introduce characters from various Final Fantasy games and get them to team together for the common good, to say nothing of a common art style. You start with four heroes — Warrior of Light (Final Fantasy), Vivi (Final Fantasy IX), Rem (Final Fantasy Type-0) and Sazh (Final Fantasy XIII) — but you can recruit more to your team within the first chapter of the game, probably in the first 10 to 15 minutes of play. This isn’t a gacha grab, at least when it comes to characters.

The absence of an energy system or other similar time restraint is welcome, and while there are literal gates that stand in your way at points until you meet certain conditions, you have some freedom in terms of the order you tackle the quests in each chapter. Some advance the story, others are side quests that offer better rewards if you have specific heroes on your team, and still others set you on a path to add someone new to your roster. There weren’t any events active at launch, but there’s a place for them on the world map and reason to believe those would be the most obvious way to add content down the road. 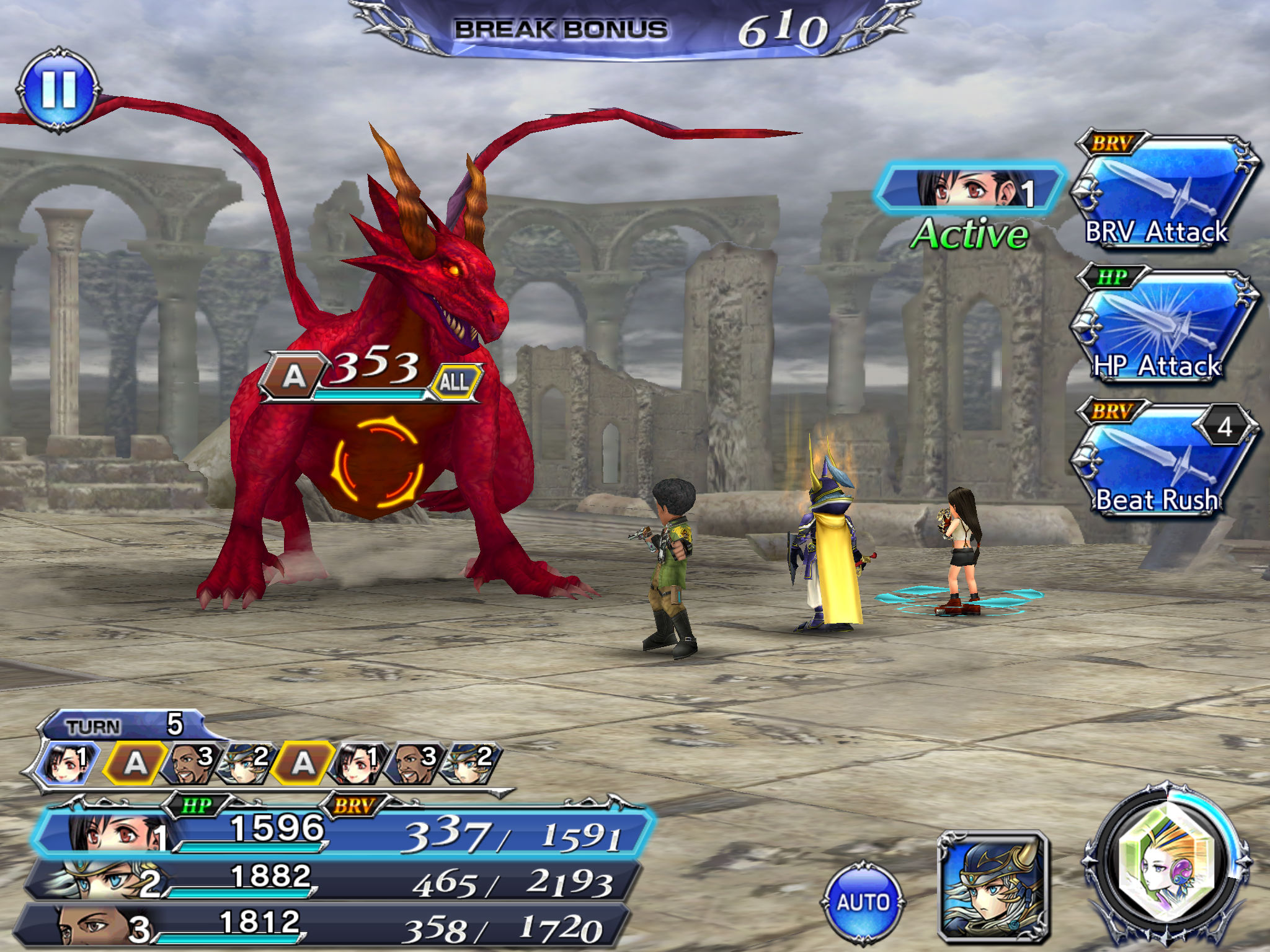 Since every FF game needs to have a battle gimmick to call its own, this one takes the Bravery concept from NT and adopts it to turn-based RPG combat. When it’s a character’s turn to act, you have the option to use a Bravery or HP based-attack, as well as one of up to two special abilities. The amount of HP damage you can do depends on how much Bravery you have saved up, so the flow of battle consists of weakening enemies with Bravery attacks until they enter a break state (which assures critical hits) and you can finish them off quickly with HP attacks. Timing is important because every HP attack takes your Bravery all the way down to zero.

There are other familiar twists that come into play, including elemental weaknesses and powerful summons, but except for the battles with the large, imposing, beautifully rendered bosses, there aren’t many times in the first few hours that you’ll have to strategize too carefully. Once you’ve got the Bravery system down to a science, even rotating characters to level them up at roughly the same speed will see you in plenty of easy fights, many of which you can win without more than one character taking any damage. A stirring challenge for the tactical side of your brain this is not, though clearing all of the quests in a chapter does unlock a hard mode which is, well, harder. 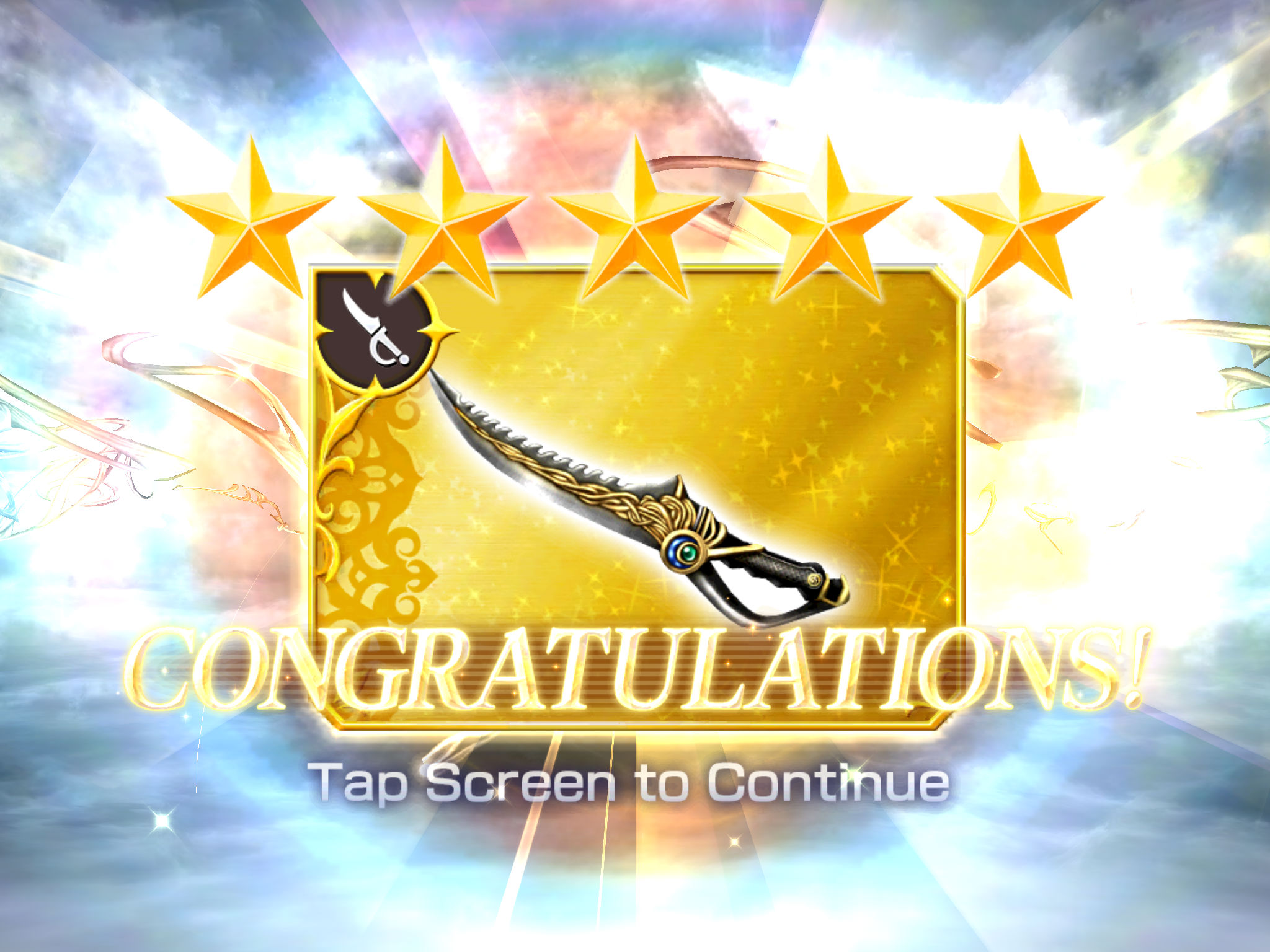 That’s even truer if you’ve got the game’s most powerful weapons, and since Koei Tecmo and Square Enix aren’t just giving us a mobile RPG with hours of free content out of the goodness of their hearts, those are dependent on random draws fueled by premium currency. Still, the game is pretty generous about giving you ways to earn it, including some stages that don’t even have any fighting, daily achievements, and events. The idea is to match the characters up with the weapons for which they are most famous, making them even more formidable than they would be with normal gear.

Even if the gameplay doesn’t grab you, there’s a chance you might be won over by the story and character interactions that make up a surprisingly large part of the overall Dissidia Final Fantasy OO experience. As the cast grows with each new chapter, it’s not hard to pick out something and nod your head in agreement with the script, from Zidane hitting on most of his female teammates to Cecil questioning whether there’s enough good in him to be on the right side to Yuffie trying to steal stuff from the others. The ever so slightly exaggerated character models tie years worth of games together, as do the familiar strains of Final Fantasy themes that so many of us know by heart. 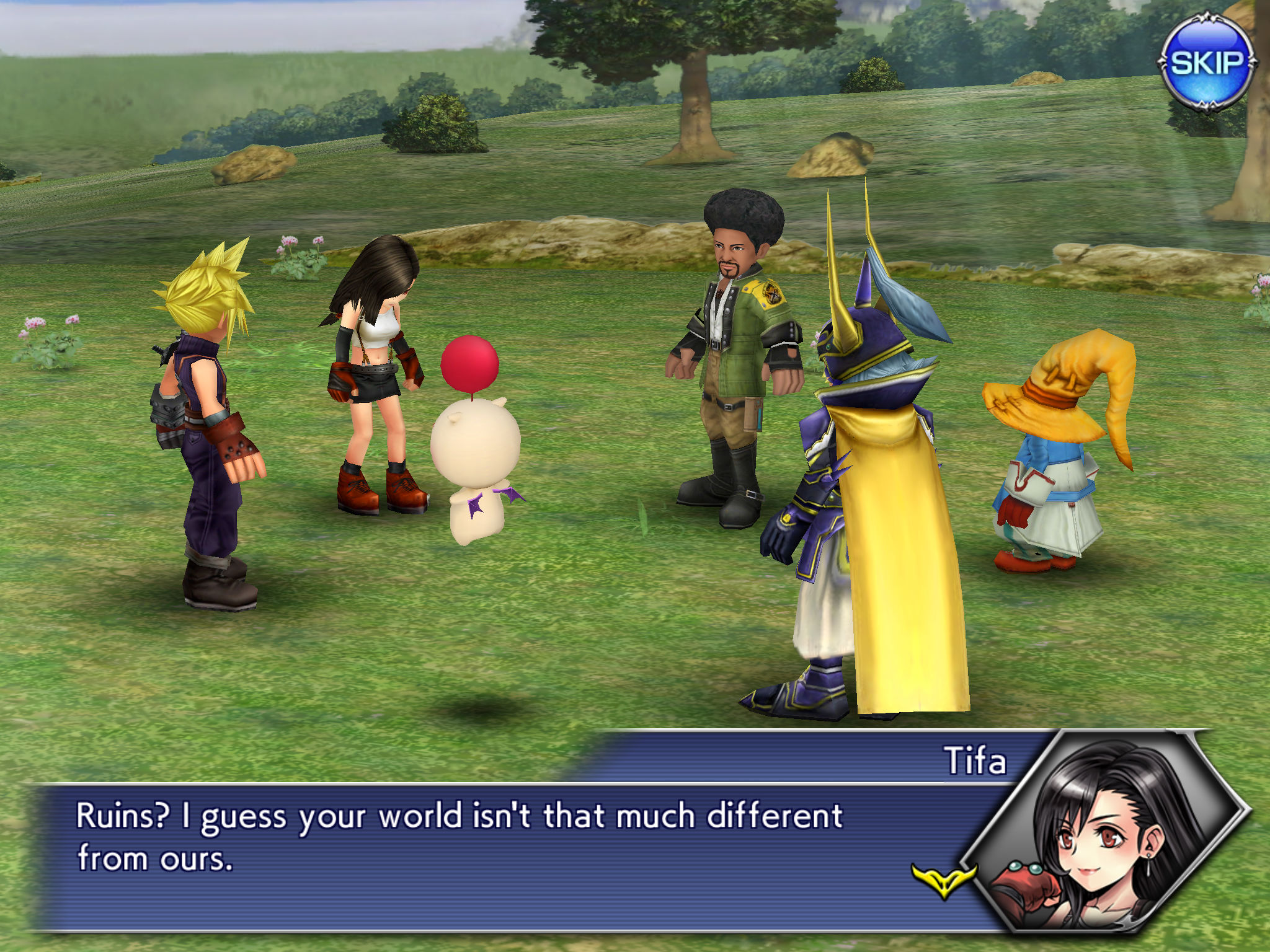 So while Dissidia Final Fantasy OO is definitely fan service, it’s not only that, and that fact alone elevates it above some of the other F2P FF titles we’ve seen come through the App Store. If you’ve got a soft spot in your heart for the personalities from the world’s most famous RPG series and want to see them all come together in a way that doesn’t insult your intelligence, this is worth a download to see if you enjoy the rest of what it has to offer as well.