Originally packaged as part of The Orange Box all the way back in 2007, Portal is easily among my all-time favorite games. The mechanic that powers Portal, if you somehow haven’t played it by now, involves using a portal gun to fire blue and orange portals around a series of “test chambers." When you go in a blue portal, you come out of an orange portal and vice versa. It would’ve been a great puzzle game by itself, but the addition of the ever-present AI frenemy GLaDOS elevates the entire experience to an entirely new level. If you haven’t played Portal, please, please do. Portal 2 was released in 2011 and built upon the groundwork laid in the original, with loads more world-building and a few new mechanics.

As anyone who follows Valve IP knows, the suggestion of a Half-Life 3 or a Portal 3 getting released has stopped being a realistic thing to expect and has basically just become a meme. So, when we got emailed the announcement of Bridge Constructor Portal ($4.99), to say I did a double-take was an understatement. I’ve since been playing through the game for the last week or so, and I really can’t believe how torn I am on this whole thing. When I was watching the progress indicator of the original app install, I couldn’t have possibly been more excited. A new Portal game! It’s what I’ve been wanting for years.

The problem is, Bridge Constructor Portal isn’t a Portal game as much as it’s a Portal-themed version of Bridge Constructor ($1.99). You play the role of Chief Custodian for the Aperture Science Vehicular Hurdling Initiative, or, in other words, you’ll be building bridges to get the little black silhouette guys featured in the the Portal trailer and their fork lifts from one side of the screen to the other.

Just like Bridge Constructor, you do this using a variety of building tools to build bridges from a select few attachment points in ever level, err, test chamber. I hope you paid attention in physics class when you built bridges out of toothpicks, as these games get tricky. As if Bridge Constructor wasn’t difficult enough, Bridge Constructor Portal adds all sorts of Portal-y elements into the mix. Much like Portal proper, it won’t take long before you’re solving puzzles that involve using gravity to pick up speed and fall through portals, launching yourself, and tons of other similar mechanics. There’s even switches, companion cubes, switches that need to be held down with companion cubes, and practically every other thing from Portal. 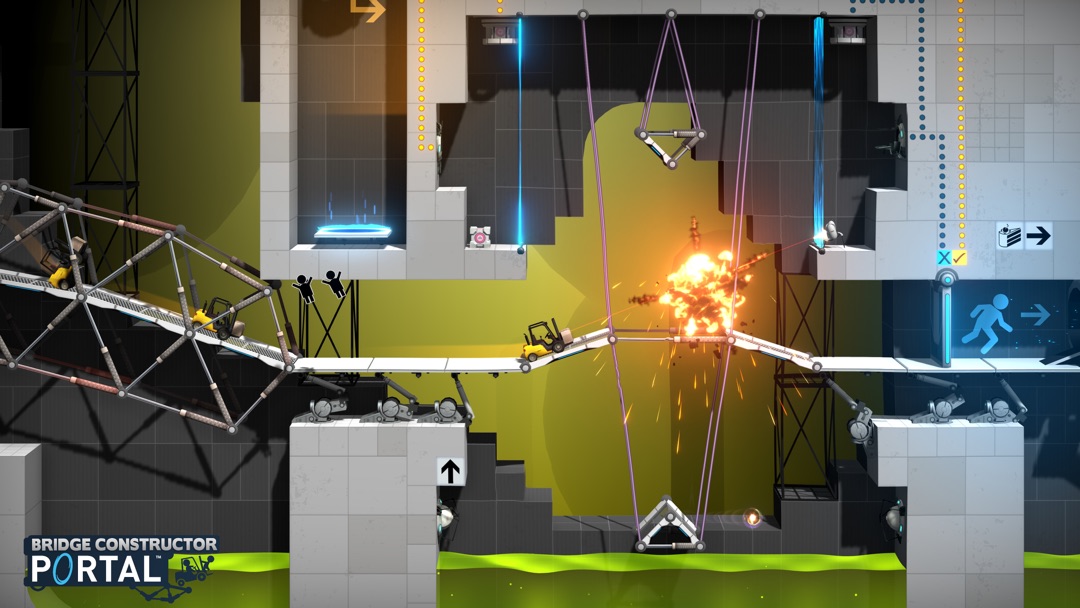 The controls work well, and are just as intuitive as other bridge building games on the App Store. You drag your finger around to “draw" where your bridge components go, move things around by tapping and holding, and of course you can zoom in to place construction materials more precisely. These games really feel fantastic on the iPad, but Bridge Constructor Portal is also fully optimized for the iPhone X. (You just need to do a bit more zooming in and out on the smaller screen.) Fat-fingering can be annoying, but if you ever can’t quite get something to where you want it to be, quickly zooming in solves the problem.

Multiple layers of objectives spice things up considerably in Bridge Constructor games, and Bridge Constructor Portal is no different. You can beat every level by just getting one test subject to the goal, even if your entire bridge collapses in the process. Alternatively, if you really want to go all out, you can send an entire convoy of test subjects across your bridges. If there’s any weaknesses that weren’t found in the first run, rapidly barreling multiple fork lifts over your structures typically finds them. 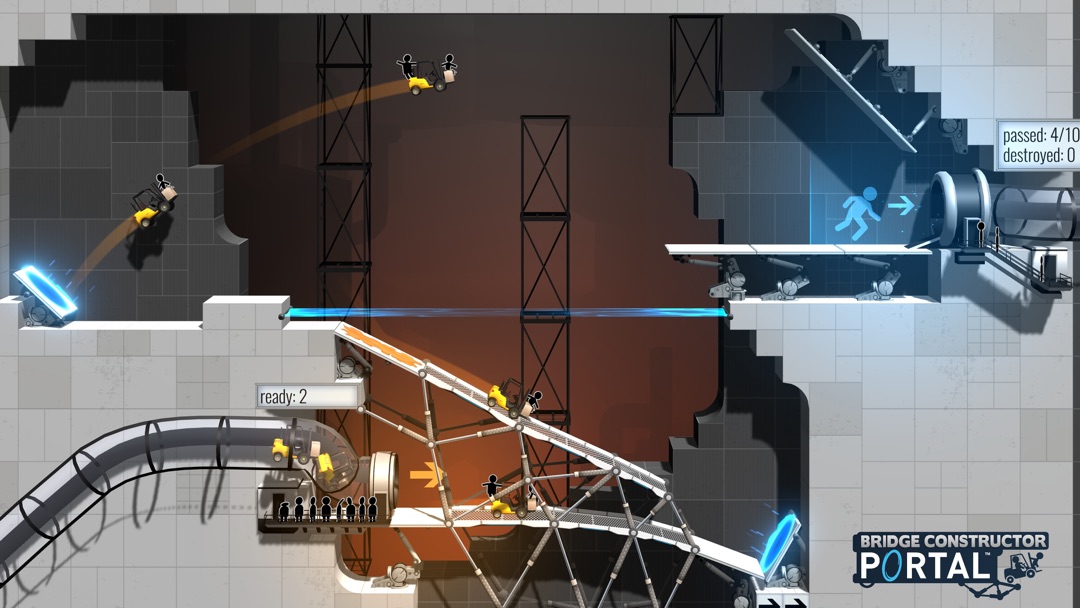 Unfortunately, as good of a version of Bridge Constructor this Portal iteration is, it features all the same frustrations of Bridge Constructor which I think is really going to throw people for a loop when they just hear about “the new Portal game." I feel like I’ve been using this example a lot lately, but it’s once again totally appropriate here: In puzzle games like The Room ($0.99), it’s really impossible to get stuck due to a really clever hint system.

By default, The Room just lets you play through it without any help. If you’re breezing through at a good pace, a hint isn’t even ever offered. However, if it detects you spending quite a bit of time on one step of the puzzle, the game offers a very vague hint. A while later, it offers a second more obvious hint, and then if it thinks you’re still stuck a few minutes later, it offers a “hint" which basically just tells you want to do. This whole system can be ignored or embraced, and it results in an experience that even people who have never played a 3D puzzle game before can get through. In Bridge Constructor Portal, if you get stuck, you get stuck. It’s super frustrating, as I’m way more into the Portal side of this game than I am the Bridge Constructor side. 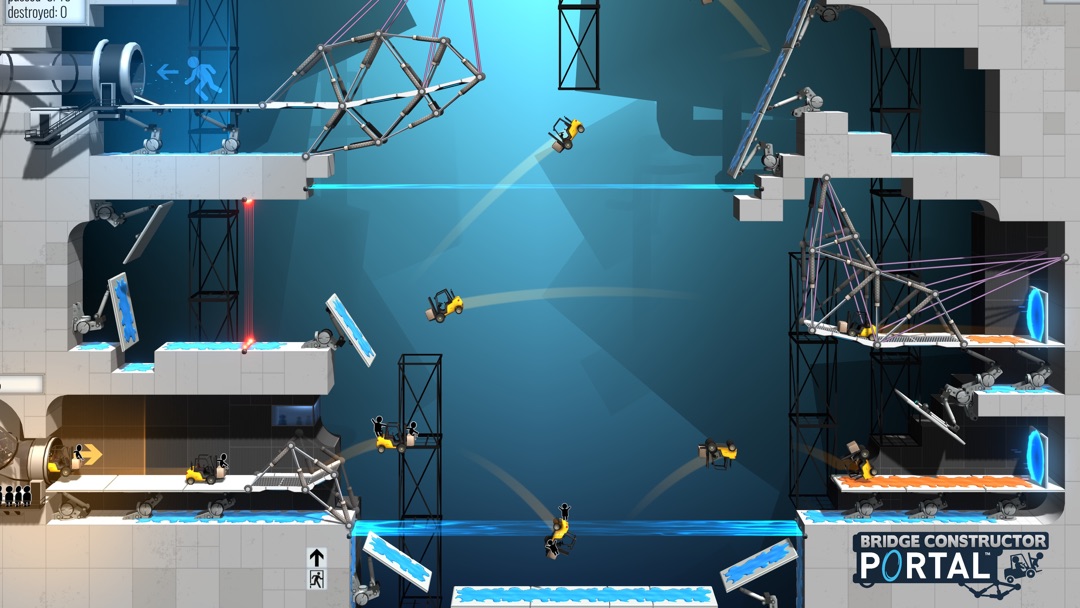 This makes scoring Bridge Constructor Portal super difficult, as it’s a totally different game depending on what you’re looking for. If you loved Bridge Constructor, this is another very good bridge building game that’s made even better through the new mechanics from Portal. However, I think a way more likely scenario is this game is going to be on your radar because of Portal. If that’s the case, the Portal-y stuff is more or less limited to the addition of a few new mechanics and taunting from GLaDOS between levels. Just be aware, if this is the first one of these kind of games you’re playing, you’ll likely be looking up solutions to keep the game going to see everything it has to offer. Alternatively, it’s equally possible that you’ll fall in love with the Bridge Constructor formula, and if that happens be sure to also download the original.