After digging a little deeper into obscurities for the last couple of releases, SEGA has gone back to one of their tried and true 16-bit franchises for the latest addition to the SEGA Forever line-up. The Streets of Rage series has lain dormant for a very long time now, but in its heyday, it was one of SEGA’s most successful action brands. To this day, I still consider Streets of Rage 2 to be one of the very best side-scrolling beat-em-ups ever made. But we’re not here to talk about the sequel. Well, not yet anyway. No, today we’re looking at the original Streets of Rage (Free), a game that may be lesser than its follow-up but still packs a pretty solid punch. Happily, SEGA has given the game the finest treatment we’ve seen for a new SEGA Forever release yet.

If you’re already familiar with the game, you’re probably just wondering how this particular version of it is. The short answer is that it’s quite fine. For the most part, the emulation holds up well enough. The problem of the gameplay stuttering when you’re downloading or doing anything online in the background persists, but other than that, Streets of Rage runs well. Even the sound emulation seems to be on its best behavior here, making Yuzo Koshiro’s soundtrack pop the way it should. It’s not perfect and it probably never will be, but I suspect it’s good enough for most people at this point. Like other SEGA Forever releases, this game supports MFi controllers, should you have one and want to get the standard experience. That said, thanks to this being the type of game that it is, the virtual controls work just fine. Back attacks can be a little fussy due to requiring you to hit two buttons simultaneously, but that’s a minor quibble. You can rearrange those virtual controls as you like in the options menu, too. 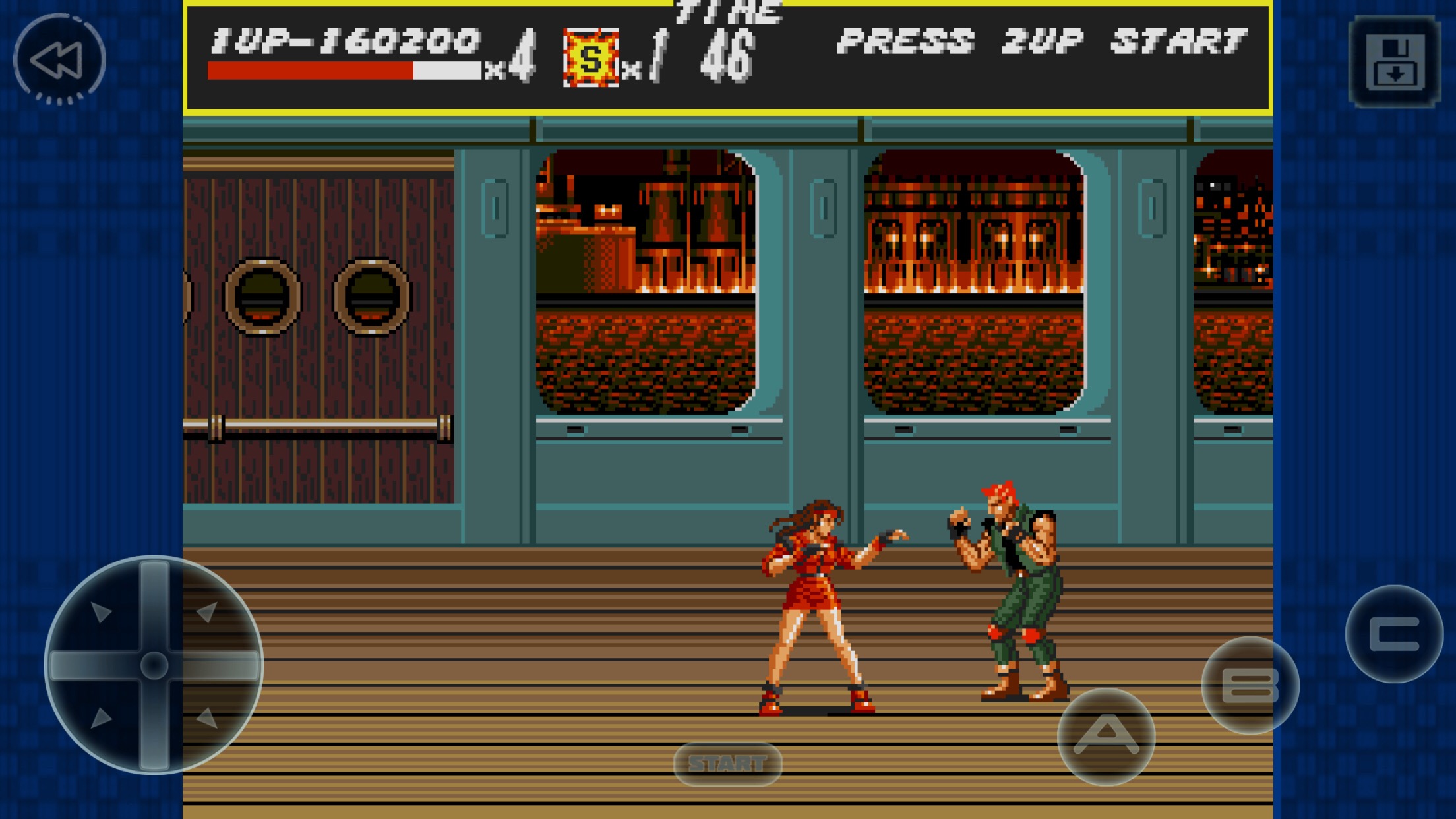 As for extras, this is the most fully-loaded SEGA Forever game yet. Returning features from previous releases include the ability to save whenever you like, a rewind feature that lets you take back the last fifteen seconds, and the choice to play for free with ad support or pay a one-time fee to remove all non-SEGA ads. But there are a couple of welcome new features, too. One of the best parts of Streets of Rage was the ability for two players to play at the same time. It was a major advantage the game had over the SNES version of Final Fight. Well, two players on one mobile device probably isn’t going to happen, but SEGA has implemented a two-player local multiplayer mode via WiFi. Online play would be nice, but this is a great start. The other new extra is an interesting one. You can watch ads to earn extra continues or rocket launcher attacks, effectively giving you a leg up should you find the game too challenging. This feels like a win-win feature and I hope to see it in other SEGA Forever releases soon.

Originally released on the SEGA Genesis in 1991, Streets of Rage is a side-scrolling beat-em-up in the vein of Double Dragon or Final Fight. Particularly in the console’s early years, a lack of third-party support relative to Nintendo’s platforms meant that it generally fell to SEGA to fill in the gaps in their software line-up themselves. With Final Fight being a big hit on the Super NES, SEGA wanted their own game about heroic fighters punching and kicking their way through the mean streets. In a lot of ways, Streets of Rage feels like a direct reply to the shortcomings of the SNES port of Final Fight. While that game had its two-player mode stripped out and was limited to only a handful of enemies on-screen at once, Streets of Rage reveled in its two-player simultaneous mode and crowded encounters. The SNES version of Final Fight had to cut a stage, bringing its total down to just five. Streets of Rage offered eight. It’s certainly the more complete package all-around. 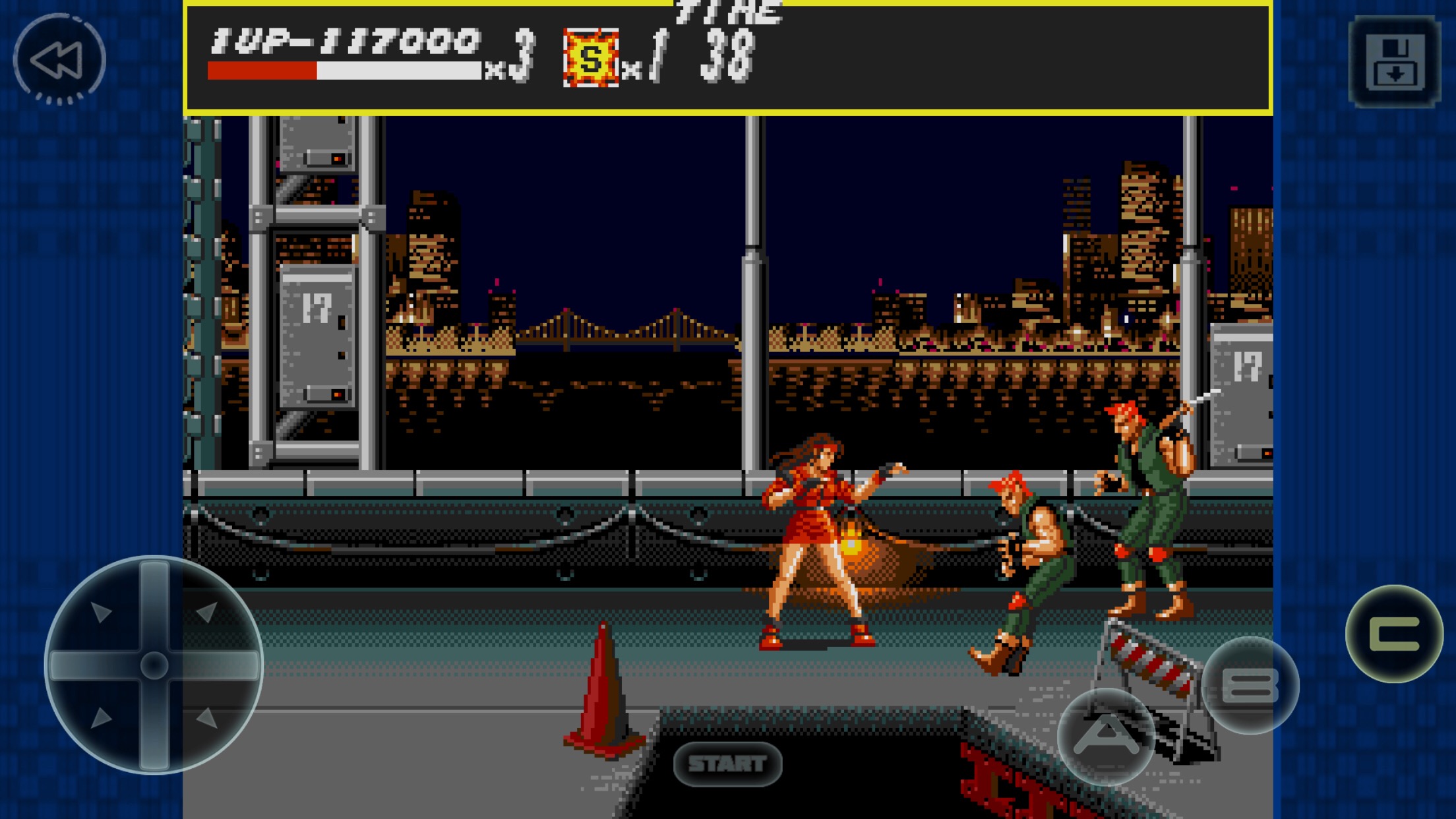 That said, outside of Yuzo Koshiro’s excellent techno soundtrack, Streets of Rage feels a little uninspired. You’ve got your usual three styles of character to choose from, including fast-but-weak, strong-but-slow, and somewhere-in-the-middle. Main character Axel looks like an off-brand Cody, and many of the enemies are a little too close to those seen in Final Fight for comfort. Each character has one attack button, a jump button, and a limited ability to call in a rocket launcher strike from a nearby squad car. Smashing obstacles on the streets will reward you with items including health pick-ups, weapons, extra lives, and so on. There’s an interesting choice that comes up before the last boss fight that calls back to the arcade version of Double Dragon, but it really only has impact if you’re playing with another player. There isn’t much here that doesn’t look lightly traced from another popular beat-em-up. Streets of Rage would find its own identity in the next game, but here, it’s barely hiding its purpose.

Does that make it a bad game? No, not at all. In some ways, the solid foundation that Streets of Rage is built on is precisely what made the following game’s brilliance possible. This is a solid, well put-together beat-em-up, one that can still hold its up head up among the other iOS releases in this genre. The boss battles are a little underwhelming, but the game generally makes up for that with the stages leading up to them. You get to travel through a variety of environments, and there’s a nice mix of enemy types and numbers to keep things interesting. You don’t have to worry about pulling off any silly platforming like Golden Axe and Double Dragon occasionally ask you to, leaving you to focus on the joy of kicking the stuffing out of crowds of baddies. You don’t have a huge list of moves at your disposal, but there’s at least enough to choose from to avoid having to rely on one solid attack for the entire game. 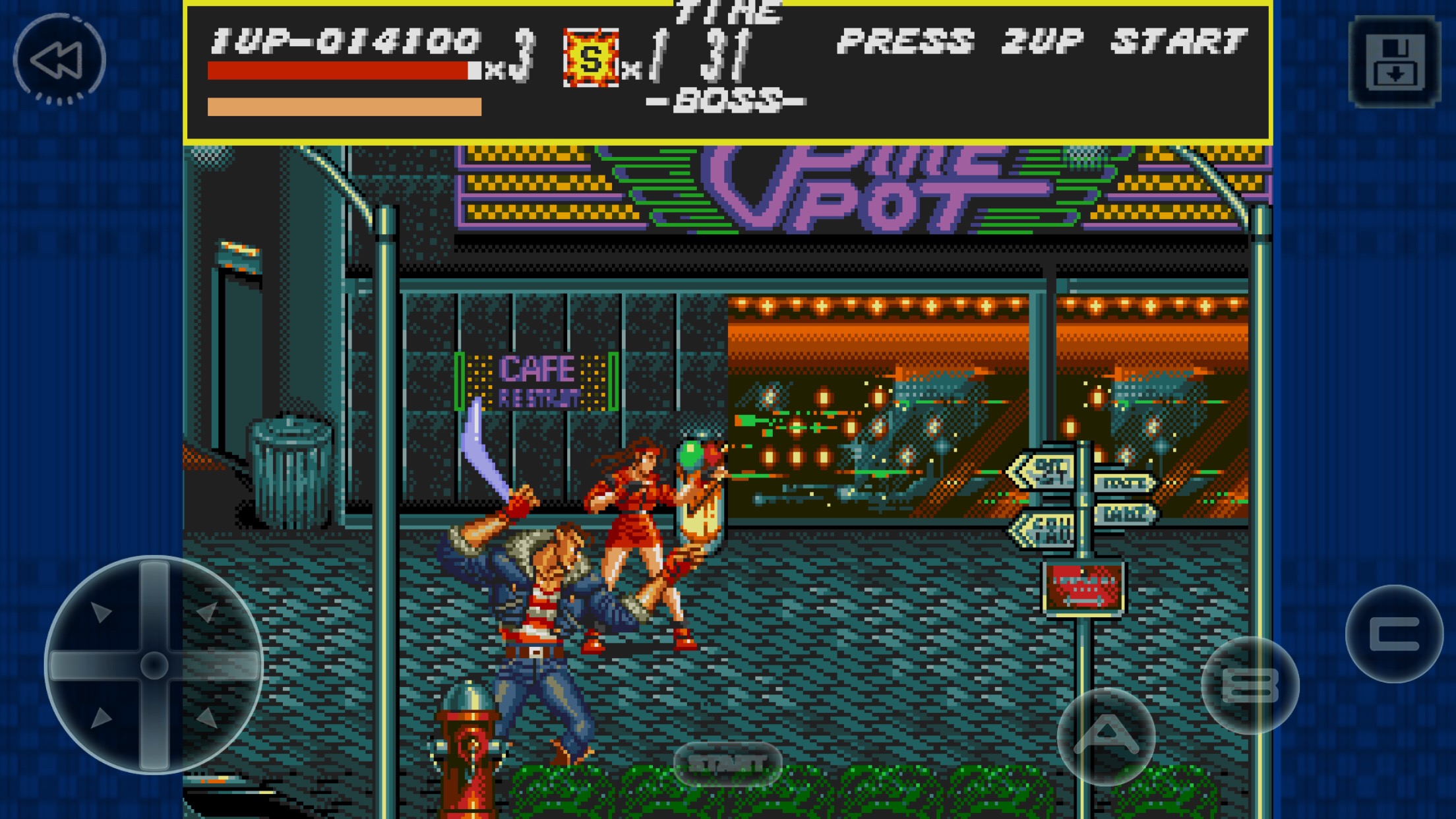 Streets of Rage is more or less a meat-and-potatoes early 90s beat-em-up with some great tunes. The game translates well to virtual controls, and SEGA did a good job both in terms of the emulation and with the included extras. While it doesn’t get anywhere near the heights its sequel hits, it’s nevertheless a solid example of its genre and worth playing if you have any sort of love for this type of game. I’m also really glad SEGA got some kind of two-player support into this version of the game. I just hope we don’t have to wait too long for Streets of Rage 2.