This is my favorite part of the new Hearthstone (Free) card set release cycle: Card reveals! If you’ve been paying attention to the Hearthstone-iverse, Blizzard has been keeping us entertained with a constant drip of new cards from the upcoming Kobolds & Catacombs card set. Today, we teamed up with Value Town to reveal not one, but three new cards. If this is the first time you’ve heard of Value Town and you’re even remotely interested in Hearthstone, you need to fix that problem. It’s a podcast featuring ChanManV, Alliestrasza, and J4CKIECHAN. They get together each week to provide a fantastic rundown of everything you need to know in the world of Hearthstone, sort of similar to our weekly Hearthstone roundups. Value Town is also supported by Patreon, so be sure to give that a look if you’re into supporting independent content creators who devote their lives to covering the games you love. Oh, and just like us, their podcast is available as a video podcast as well, so if you’re more into watching than you are listening, be sure to give that a look. (Does it make sense that we’re doing this announcement together yet?)

Here’s our #collab (I think you hash tag that, right?):

My favorite thing about all the cards that Blizzard has been revealing so far is how it seems like all of them are primed to just make ridiculous YouTube videos, and our set of cards is no different. First up, take a look at Kobold Hermit: 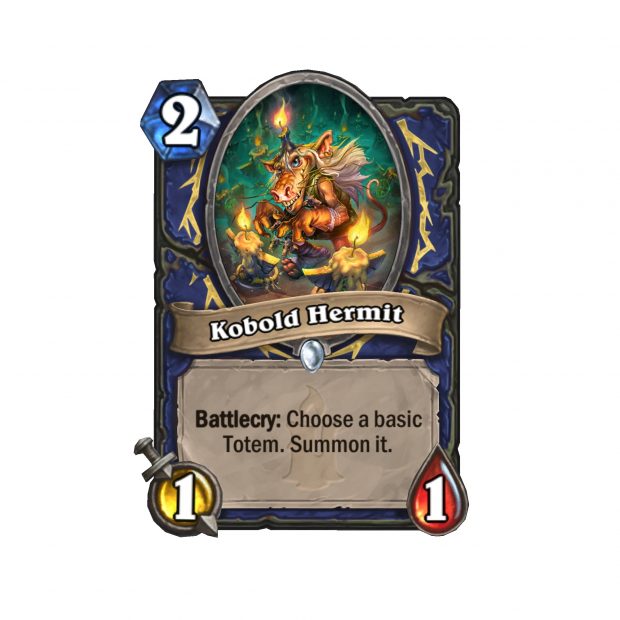 I love that we were given shaman cards to reveal as I’ve gravitated towards playing shaman the most- Largely because I mained a restoration shaman in World of Warcraft for more time than I’d care to ever publicly admit. (My play time is measured in months, let’s just say.) RNG is at the core of Hearthstone, and obviously, often rears its ugly head when you’re playing shaman decks and really need a specific type of totem. Maybe it’s confirmation bias, or maybe I’m just an unlucky person, but if I really need spellpower, I’ll never get that totem from my hero power. The same can be said for the other totem types.

Well, using Kobold Hermit, you’ve got a tiny bit of control over that for two mana, and even if you don’t need a totem at the time and are just playing this card as a two drop on curve, it’s still nice to get two bodies on the board- Particularly without any sort of overload to worry about (which always seems to be the drawback of any shaman card you’d actually want to play). 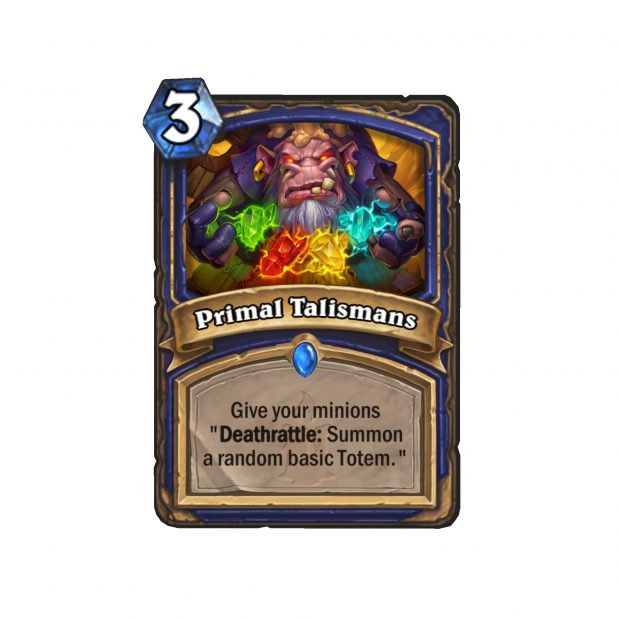 Next up is Primal Talismans which for three mana gives your minions the deathrattle effect of summoning a random basic totem. As pointed out in the above video, what’s super great about this card is it gives you some level of potential recovery after a board wipe. All too often I find myself over-extending and getting as many minions as I can on the board because I want the world’s sickest Bloodlust the next turn. …And of course your opponent always seems to have an answer for your army of minions with some form of AoE.

Well, if you hold back enough mana to bust out Primal Talismans, you could still potentially have a pretty massive swing the following turn. But all of these cards that give you loads of totems feed into something way better, and that’s Windshear Stormcaller, a card that seems to be specifically designed for you to be able to turn entire games around if you’ve got loads of totems: 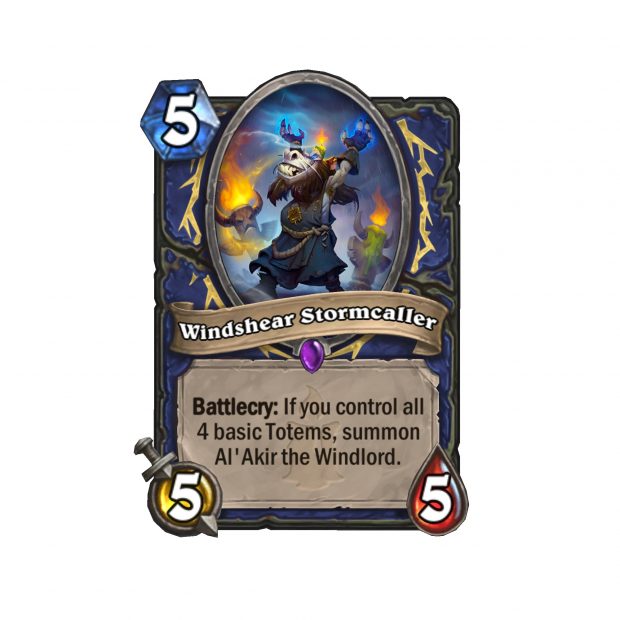 For five mana, you get a 5/5 (which in itself is pretty decent) but it has the battlecry effect of if you control all four basic totems, summon Al’Akir the Windlord. The potential value here is off the chain, and I’m really not sure the combo is that fragile. 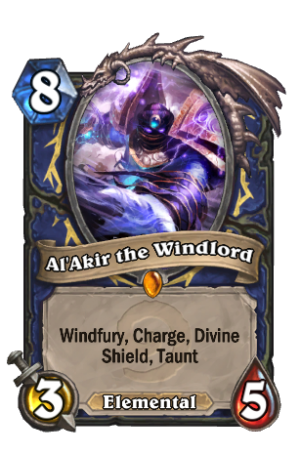 There’s loads of ways to bounce totems you summon back to your hand, including both Ancient and Youthful Brewmaster, or even Grumble, Worldshaker which the Chinese Hearthstone streamer Snowkiss revealed. (It returns all minions to your hand and they cost one mana to re-summon.) There’s also potential to use either Tuskarr Totemic or Wicked Witchdoctor to get more totems on the board along with Spirit Echo to keep them.

What I’m the most excited for is seeing the inevitable videos where Windshear Stormcaller is being played with Brann Bronzebeard in Wild, along with other cards that abuse battlecry mechanics, to spawn a battlefield full of Al’Akir’s. (Yes, the minion limit is a thing, but who knows what kind of creative things deck builders can come up with.)

Of course, we’ll need to see how the Kobolds & Catacombs meta evolves (along with the rest of the cards in the set) to see just how much play this set of three cards (and associated totem shenanigans) get, but I’m pretty excited to try them out. Kobolds & Catacombs officially launches in December, but right now you can pre-purchase fifty packs of the new card set for $49.99. Unless you get involved in gift card deals or other weird things (like Amazon Coins) these pre-purchases are typically the best way to buy cards, and you get a cool card back to add to your collection. Or, you can always just save up your dust and craft anything that looks cool when the new set launches next month.

Thanks a ton to Blizzard for letting us participate in card reveals, and be sure to subscribe to Value Town and listen to their podcast. It’s on iTunes as well as basically every other place you can get podcasts!