One of the remarkable things about the first three games in the Cally’s Caves series of action-platformers is in how far they came in a relatively short time. The first game is quite primitive compared to the third, but they released only a couple of years apart. The thing about gains like that is that they rarely scale in a linear fashion. Cally’s Caves 3 (Free) was an outstanding accomplishment for an indie game, presenting something that wouldn’t have been terribly out of place as a retail release on a dedicated handheld. There’s really only so much more Cally’s Caves 4 (Free) could realistically be expected to do to top that. True to that, this is more or less another helping of the high-quality action found in Cally’s Caves 3. For whatever it lacks in novelty, however, it makes up for by burying you in quantity.

If you’re new to this series, the Cally’s Caves games are action-platformers in the vein of something like Mega Man X. You play as a little girl named Cally who starts off with little more than a pea-shooter and a sword but eventually amass a rather large arsenal of projectile weapons. These weapons are upgraded in a fashion similar to Sony’s Ratchet & Clank series. The more you use them, the more powerful they become, even changing shape and function at certain intervals. Cally can also level up herself, increasing her health stats among other bonuses. You can also upgrade your character using the gobs of coins dropped by enemies and found in treasure boxes scattered throughout the stages. Each world is made up of several discrete stages and culminates in a boss battle. The stages themselves tend to be small but open, with lots of opportunities for secrets and tricky platforming to go along with the shooting and slicing. 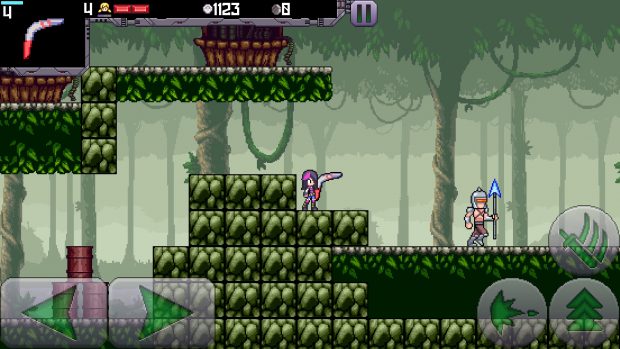 The previous game in the series made some leanings in the direction of a Metroid-style set-up where you would earn new abilities and need to backtrack through levels to find secrets. Cally’s Caves 4 steps away from that a little, instead focusing more on linear progression with the occasional branch in the road. While there are a few things you’ll have to go back to previous stages to get later on, almost everything important to find in Cally’s Caves 4 can be acquired on your first run through each stage. The one major exception to this comes from a new scanning item that requires you to clear out all of the enemies in a stage before you’re able to use it. Each stage has its own specific document piece that you can find through this method, and you will almost certainly need to return to certain stages to find everything.

While there are a few changes to the gameplay mechanics, the general feel of the game is similar to the last one. That’s a good thing, mind you. Apart from some dicey reactions to collisions, this is a series that benefits from excellent controls and physics. The spread of weapons is great, and I can’t imagine any given player wouldn’t be able to find at least a couple of favorites in the bunch. If none of them are doing exactly what you’d like, there’s no need to fear. Late in the game, you’ll be able to modify the weapons using scraps that you’ve picked up along the way, adding things like a stun effect or a wider shot to whichever guns you please. The very process of leveling up the weapons is compelling in and of itself. When a gun changes into a new form, you not only get new capabilities but also a new sprite to represent that weapon.

Cally and her friends are no longer confined to the caves, either. In fact, there’s a surprisingly large variety of locales and themes to the stages in Cally’s Caves 4. Since they don’t really flow into each other that well at all anymore, you now operate out of a headquarters that serves as a hub. The game’s shops are now located there rather than being dropped along the road, and you can fly out to any checkpoint you’ve tagged when you’re ready to depart. You can return to your headquarters at any time by exiting out to the title screen, and there’s no penalty for doing so. Should you want to grab a quick upgrade or some consumables, it’s quite easy to zip out, do some shopping, and head right back to where you were. 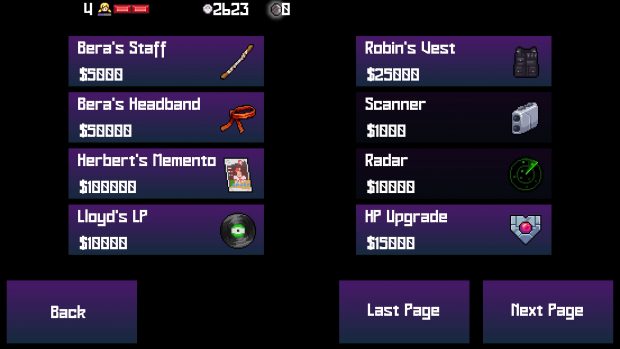 This is all well and good, but it really turfs the difficulty of the game. It’s hard to believe this is the same series that nearly brought me to a furious rage with its first installment. In the main story mode that can be played for free, it’s quite unlikely you’ll ever die unless you’re really goofing off. Even if you do perish, the penalty is just a small handful of coins that you’ll probably make back up before you’ve even made it to the next board. Even the bosses are total push-overs. The game only starts to bare its teeth in the New Game+ mode, which actually picks up the story from the ending of the main mode. Even there, you probably won’t run into any real trouble. I certainly died more often, but only because I was trying to level up weaker guns and was lazy about using consumables. It was hard to care about the money penalty because I had already bought every upgrade by then, too.

It reminds me a little bit of the Nintendo 3DS game Super Mario 3D Land, where the main mode was the length of a regular Mario game, but kind of boring. The real game didn’t start until after you had cleared the main mode, unlocking a full-length extra game that actually put up a fight. Cally’s Caves 4 does the same thing. The main story mode is just as big as the previous games, if not a little bigger. The New Game+ more than doubles the length of the game and, as mentioned, is not so much a New Game+ as it is the second half of the game. There’s also a survival mode that is exactly what it says on the tin, and a special side-story called QWERTY Mode. Only the main story mode is free. You can buy the other modes a la carte or in one big bundle that includes a set of extra costumes for Cally.

While it’s awesome that the game includes so much content, it’s almost too much. I didn’t time myself but I’m pretty sure playing through the main story, New Game+, and QWERTY mode added up to more than 10 hours. I’ve played shorter RPGs, even. And that wouldn’t be bad except for the fact that the main story mode felt like a real grind by the end. Picking off enemies from a safe distance while parrying away almost every counter-attack got dull. Having to make blind jumps only to realize that I’d just missed an enemy and would have to restart at the last checkpoint to get my scan started to take a toll on my patience. And you really do want to get those scans as you go, because at least as far as I could notice, there’s no way to tell which areas you’ve successfully scanned and which you haven’t. By the time I got to the New Game+ mode, I was kind of tired of Cally’s Caves 4. And yet, I still had a very long road ahead of me. Admittedly a more enjoyable road, but I can’t help but feel like I had to slog through a lot of middling content to get there. 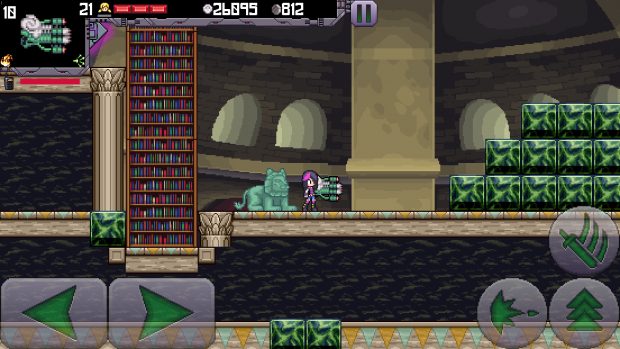 Now, your mileage may vary on this point. Certainly, I have to admit that it feels odd to complain about a small-scale developer including too much in one game. Cally’s Caves 4 is one of the longest games of this sort I’ve played anywhere, and it’s not like it’s recycling tremendous amounts of content to pad out its run-time, either. It’s just that big. Before I played the game, I had wondered why it had taken so long to make compared to its predecessors. While I was playing the main story mode, I really wondered. Once I realized the true nature of the entire game, however, I no longer had any questions about why the development took a couple of years. This is all the Cally’s Caves you could ask for, and then some. And then some more on top of that, too. The value for your buck here is incredible.

Looking beyond the simple equation of playtime for money, though, I’m not sure that the game does itself any favors in coupling such a long playtime with so deliberate a difficulty curve. I love this series and I think the gameplay mechanics are a blast, yet even I found myself wishing for the end to come well before it did. There’s a great game in Cally’s Caves 4, one that surpasses even the thrilling heights of the previous game. Unfortunately, it’s served in a giant casserole dish with a lot of less savory bites, and you can’t really pick out the lima beans here. In the end, the game taken as a whole isn’t nearly as consistent in its quality as Cally’s Caves 3. It’s still more than worth a go, but make sure you’re prepared for a lot of filler along with the killer.