Square Enix’s latest premium release on mobile, Final Fantasy Dimensions 2 ($6.99), is an unusual game in a few ways. Perhaps its most curious quality is that it’s a premium game built from the skeleton of a free-to-play game. We see the opposite happen often around here, but it’s rare to see things go down this way. On top of that, it’s been a good long while since the first Final Fantasy Dimensions (Free) released. Friends, I had questions. Fortunately, I had to opportunity to get some answers from no less than the game’s director, Takashi Tokita.

You may not know his name, but you almost certainly know his work. Tokita was the lead designer of Final Fantasy 4 ($6.99), a co-director of Chrono Trigger ($4.99), and the director of Parasite Eve, among many other credits. He was part of the development team on the original Final Fantasy ($7.99) and has been instrumental in Square Enix’s pushes into handheld and mobile gaming. I’m grateful that I had the chance to speak with Mr. Tokita about his latest project, and I’d like to share his answers with all of you.

TouchArcade (TA): You’ve been involved with the Final Fantasy series since the very first game. Since then, we’ve seen the series take many interesting turns and forms. In your opinion, what makes a game ‘Final Fantasy‘?

Takashi Tokita (TT): I believe Final Fantasy is a series that helped lay the foundation for JRPGs – a term now used to describe an entire genre. In Japan, manga, anime, and games have served as the various mediums for young creators to challenge themselves without limits when creating content. Dragon Quest took the first steps in merging RPGs with manga to help spread the genre throughout Japan. Final Fantasy went a step further and married the RPG with multiple forms of entertainment – anime, movies, and science fiction – to create a system that we now call the JRPG. This type of game allows the player to become the character to experience the narrative. In my mind, a fantasy that incorporates science fiction elements as well as drama that allows players to connect with a cast of appealing characters is truly what makes a game Final Fantasy. 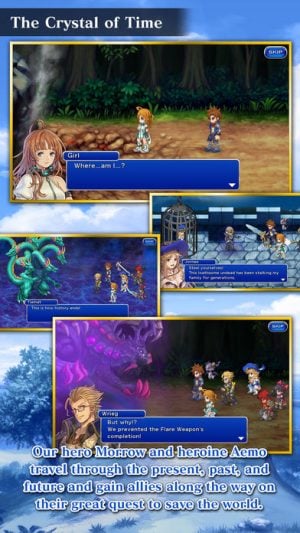 TT: Following the release of Final Fantasy Legends 2: The Crystal of Time (the free-to-play game from which Final Fantasy Dimensions 2 is based) in Japan, we heard the voices of many players in the West who were looking forward to a global release of the game. However, we first wanted to focus on establishing the game as a free-to-play title and solidify our live operations, but had always worked hard with the goal to bring the game to the western audience after things had settled. The Japanese version ended its free-to-play operations after part one, “The Crystal of Time Arc,” and part two, the “Eureka Arc,” concluded, but we wanted players in the West enjoy these stories as well. This prompted us to release the title as a standalone, premium app that would allow players to experience fully all of the content the original free-to-play version had to offer.

TA: Final Fantasy Dimensions 2 is a premium version of what was once a free-to-play game in Japan. What were some of the challenges in converting the game from a F2P ‘social RPG’ to a premium single-player game?

TT: We had to evaluate the user interface and character advancement system at a base level and modify them to fit a single-player game model. Particularly with the “Eureka Ark,” we took raid battle content in which players would advance the story by participating in the raid and implemented some pretty major changes so that it could be enjoyed in a single player game. Additionally, there were other areas of the game such as the character advancement system – which takes into consideration a lot of end-game side content – where we reviewed the content in its entirety, reworking the system and its balance from square one. Many members of the staff had been with the team since the free-to-play days, and we had some new staff that joined solely for the standalone title – because of a combined effort from all of our team I believe we were able to succeed in creating an RPG that is really worth playing through to the very end.

TT: The previous iteration of Final Fantasy Dimensions was created under the theme of a new Final Fantasy that hearkens back to the era of Final Fantasy 4 and 5. We received extremely positive feedback from players in the West, especially regarding the game’s job system as well as the narrative that unfolded simultaneously between two separate worlds. Final Fantasy Dimensions 2 keeps that same overall flow, but we worked to create a new title that incorporated the atmosphere of games from the latter half of the Super Nintendo era, like Final Fantasy 6 and Chrono Trigger. You can say that the English title “Dimensions” prompted the concept of a story that transcends both space and time.

TA: In your career at Square, you’ve worked on console games, dedicated handheld games, and mobile games. What do you feel are some of the distinct advantages and disadvantages of working on mobile, from a developer’s standpoint?

TT: The specs of some current generation smartphones even surpass handheld game devices, and while they may not match consoles, mobile is a platform on which we can take a varying approach from a graphical standpoint. One of the greatest advantages is the convenience of being able to play on mobile devices almost anywhere, and because since the user base for mobile is so great, it provides increased opportunity for players to enjoy the game. Additionally, mobile does not require the heavy development resources that a AAA console title would, which allows us to challenge ourselves and be a bit more “outside-of-the-box” in our development. However, one disadvantage is the fact that since a mobile device provides other forms of entertainment such as internet and videos, the device itself could be considered a competitor. Lastly, screen size can also be limiting in terms of what you can do with user interfaces – but on the other hand that can also lead to innovation in design, so that one might be considered a double-edged sword.

TA: What are some of your favorite mobile games? 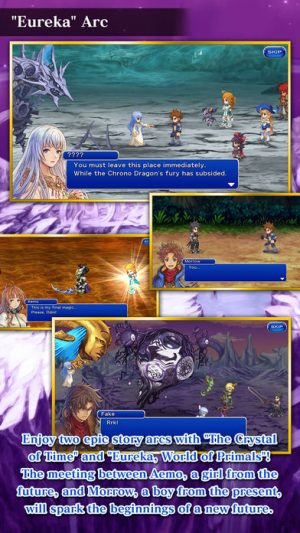 TT: I think Million Onion Hotel ($3.99), a game created by some former Square coworkers, has been one game I’ve been having fun with. It’s a game with simple controls, but with gameplay that gets progressively more complex and hectic, and a world setting that has a unique and otherworldly mood. It’s a game that both embraces freedom in play, but also a chance to challenge oneself. It’s a bit different in terms of genre, but I definitely got a kick out of it!

TA: There are quite a few Final Fantasy games on mobile already. What do you think Final Fantasy Dimensions 2 has to offer that makes it stand out from the crowd, so to speak?

TT: Indeed, there are quite a few! (laughs) I mentioned this earlier, but I think the Super Nintendo-era flair that embraces games that were made prior to the JRPG reaching its peak really makes Final Fantasy Dimensions 2 a unique game. We named the Japanese title “Legends” with the hopes to signify that, and made sure to incorporate this concept into many aspects of the game: the characters, the story, and in the musical tone.

TA: What are your thoughts on the future of premium original games like Final Fantasy Dimensions 2 on mobile?

TT: I believe the value of current premium titles is being able to bring games to players who desire a high level of content at a fair price. This title was another challenge we put ourselves up against, but even so, I think there are still many avenues that we have yet to explore in creating these games. It would be interesting to see a premium subscription service that delivers original game content, just as we see with video streaming services and even theaters.

TA: Is there any message you’d like to give to our readers?

TT: If we count the planning stages, Final Fantasy Dimensions 2 is a game that had been in the works for a long four years. It is actually the longest I have spent with a single game, and as the name suggests, I too feel as though I have transcended time and space during this time. Morrow, Aemo, Jornee, Parai, Maina, and Deathlord… these characters are like my children, my brothers and sisters, my best friends. They have all become very special to me. Final Fantasy Dimensions 2 is an adventure that takes you to new times and dimensions, but with a different flair than that of Chrono Trigger – I would love for everyone to enjoy this game!

I’d like to thank Mr. Takashi Tokita for taking the time to answer my questions, and Square Enix and FortySeven Communications for facilitating this interview.