I’m probably not saying anything controversial by mentioning that like any other human, I have genre preferences. I obviously enjoy my superhero stories and flights of fantasy, and humor goes a very long way with me. I’m not that big on horror stories, however. Stories about ghosts and the paranormal have to work a little bit harder to get my attention. With that in mind, I wasn’t sure how well I was going to take to Heart of the House ($5.99), a recent release from prolific gamebook/interactive fiction publisher Choice of Games. It’s a Victorian-era story of the supernatural with a healthy dollop of mystery mixed in. While this isn’t my usual cup of tea, the character development and overall high quality of the writing ended up winning me over.

First, let me be very clear that this particular release from Choice of Games was written by Nissa Campbell, a former TouchArcade staffer who contributed many excellent reviews during the years she worked here. She was already beginning to move along to her next thing when I started here, so the two of us were more or less ships passing in the night. But I do want to plainly disclose the author’s connection to TouchArcade so that you can factor that in as you will in the review that follows. 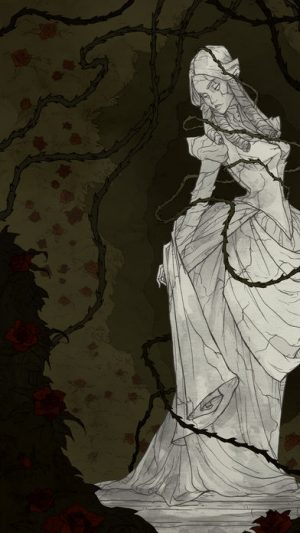 The premise of Heart of the House sees you playing a character who is sensitive to the supernatural. Your uncle, who raised you, has gone missing during an investigation. You’ve traced his last known whereabouts to a seemingly innocuous town, and head out there with your partner to see what you can find. While the town seems almost suspiciously pleasant, it’s immediately apparent that there’s something off. Most of the trouble seems to center around the house of the local Baron/Baroness. Fortunately, circumstances give your character a chance to explore said house. Only time, and your choices, will tell if that was a wise decision or not. As is almost always the case with ChoiceScript games, you have a great deal of input on exactly who your character is and what their preferences are. The choices you make will effect your character’s stats, which in turn determine the success or failure of future choices.

Heart of the House chooses to focus on a relatively small cast, spending a great deal of time and care in developing them and their relationships to one another quite thoroughly. In the end, even the character I thought was shaping up to be the silly villain of the piece ended up being surprisingly well-rounded and sympathetic. There are very few throw-away characters as a result of this focus, which makes for a very engaging story. My favorite character of the bunch ended up being Loren, the forgetful but good-hearted servant of the manor. As with just about everyone in this tale, there’s more to Loren than initially meets the eye. You may discovery the mystery, or you may not. It really depends on where you choose to concentrate your energies.

The setting is also well-realized. Early on, a choice can lead to Wuthering Heights being name-dropped. While this story obviously takes place slightly later than that one, you can certainly feel some influence from that dreary tale. Particularly with regards to the Baroness’s manor, which feels as much like a prison for certain characters as it does a home. The utterly mundane nature of the town contrasts well against the bizarre happenings in the manor, and as in Wuthering Heights, what happens outside of the walls of the estate often feels inconsequential to what’s going on within them. Even as the story builds and both logic and reason are both forced to take a time-out, the world feels believable and consistent within its own established rules. 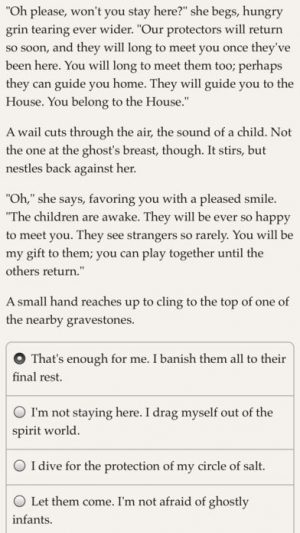 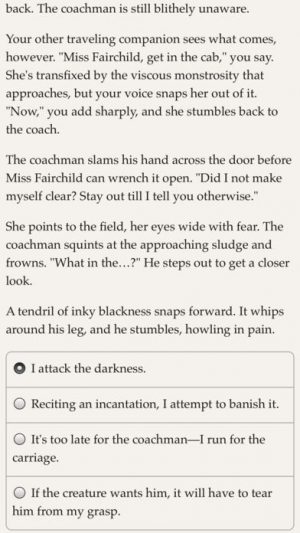 Should you choose it to, romance can play a fairly major role in the story. It’s impressive that the romantic subplots are both skippable and yet still feel like an integral part of your own story should you opt to pursue them. It’s all too often the case in ChoiceScript games that romance is treated like a little box to be checked off and little more. In Heart of the House, it can be your everything or nothing at all. You can build long-term partnerships, flings, friendships, or whatever else you’d prefer. The game is remarkably good at accounting for and smoothly accommodating virtually any preference a player might have in this regard.

It’s a rather lengthy story, but it passes at a nice pace. Chapters are neither too long nor too short, and the narrative nicely balances between its character-building and pushing the main plot forward. The overtly supernatural elements tend to weave in and out early on, but as the game approaches its climax, the story gets a massive infusion of Lovecraftian-style horror. In places it’s nearly incomprehensible. Not because the writing fails, mind you, but because it succeeds. You’re not meant to know what exactly is going on at times, and there’s probably no way you could even if you had everything laid out in front of you. It becomes apparent that your character is in way over their head, and the text pulls no punches in making you, the player, feel that as well. Should you work your way towards one of the good endings, there will still be questions about some of the things you saw. That’s just how it is.

At any rate, there’s not much else I can say about this without spoiling its wonderful story more than I already have. Chilling, thought-provoking, and decidedly human, Heart of the House is an excellent piece of interactive fiction. If you have any appreciation for choice-based narratives at all, you’ll probably enjoy this one. It doesn’t play around much with the conventional mechanics of the genre, but what it creates within them is about as much as anyone could ask for.