If you’ve been watching the news coming out of BlizzCon 2017, then you probably know by now that Hearthstone (Free) is bringing us a new expansion, Kobolds and Catacombs, in December, but, what’s more interesting to most players, Hearthstone is also getting a single player mode called Dungeon Run, and I got to play it earlier today. First, a few quick words for those who haven’t read the earlier stories we’ve posted. Dungeon Runs is single player content that emulates roguelike dungeon crawlers using the Hearthstone recipe. You can read more details in our earlier story.

So, how does it play? Although I didn’t have access to all the heroes or bosses, I can already see the new mode’s great potential. Think of this as a more customized version of Arena, but instead of playing against other players, you play against different bosses, and that makes each run feel new and interesting. You start by picking a class. Each class comes with a pre-set deck of ten weak cards, and the reason behind that is so you can feel like a Level 1 adventurer in a role-playing game, an adventurer with just basic weapons and skills. Since you start with such a weak deck, every one of the powerful cards you’ll find along the way will change your deck substantially.

Once you pick your Hero, you draw the top card of the boss deck and see which boss you’re facing next. The boss deck will come with 48 bosses, although the demo was, of course, much more limited than that. Bosses come in all shapes, sizes, and difficulty levels (more on this in our upcoming interview with the developers). In one run, and they do feel like runs, I went from one boss with 20 health and a Hero Power that cast a Counterspell to a 40-health boss with a pretty strong deck packed with Legendaries. So, expect surprises, just like you would in a dungeon crawler. 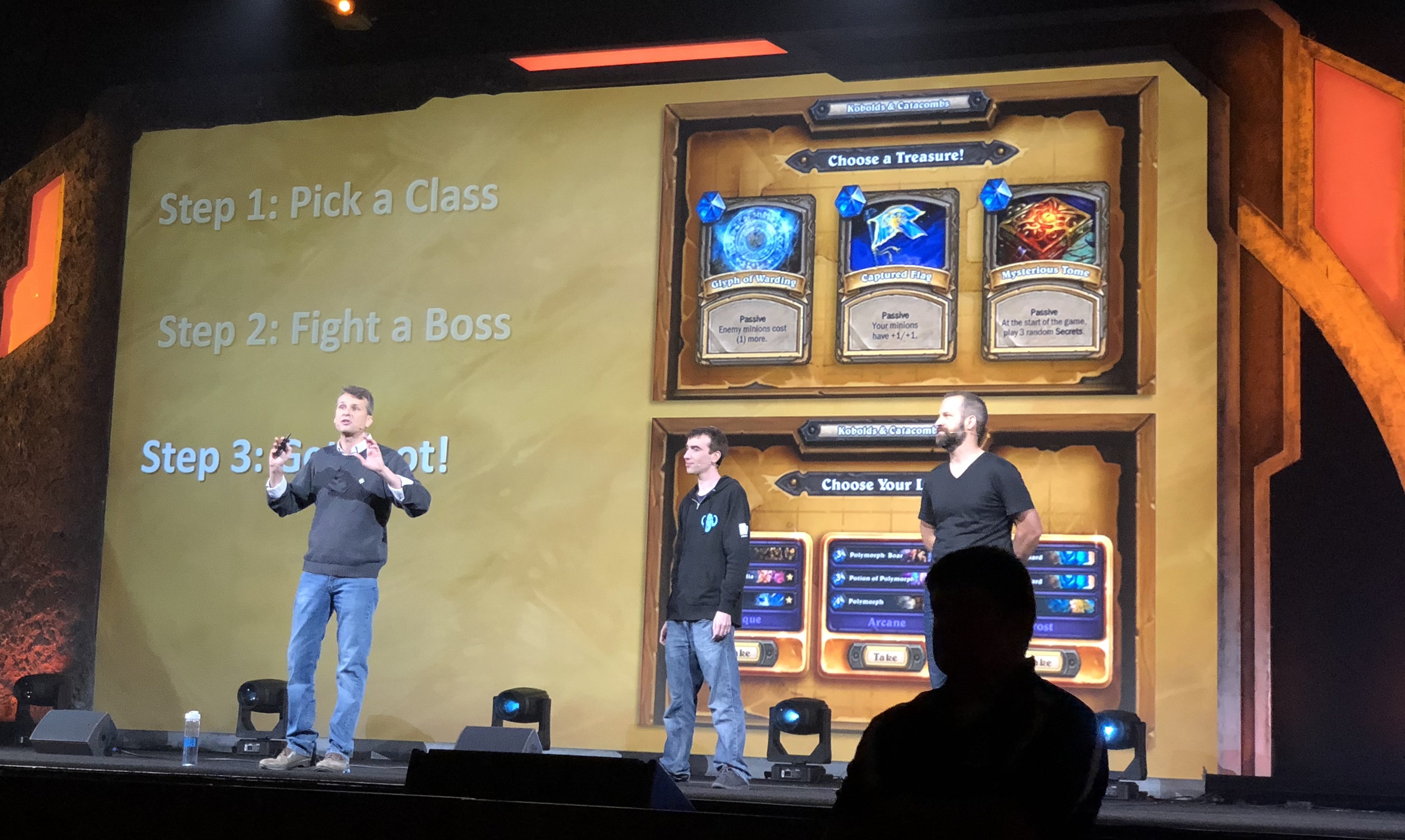 Fortunately, every time you beat a boss, you get to grab some loot and strengthen your deck. There are two kinds of cards you get every time. Right after I beat each boss, I got to pick one of three treasures, which are pretty powerful cards and can sometimes give you a passive power (Spells cost 1 less, for instance). And then, I got to pick one of three sets of three cards, each with a specific theme. For instance, in my Mage run I could have gone the Elemental route or the Secrets route, and so on. And the sets are named, which will make it easier for beginner players to figure out what each selection will do for their deck.

I had a lot of fun building different decks based on how I wanted to play and what kinds of cards I got. And a fun fact about the Treasure cards: the developers pointed out that these cards are so powerful that they couldn’t add them to the ranked or casual side of the game without breaking it. Decisions will matter immensely, just like when levelling up a hero in dungeon crawlers. In one run, I made the mistake of going all in on Elementals after beating two bosses and ended up not having the right cards to beat the next one. 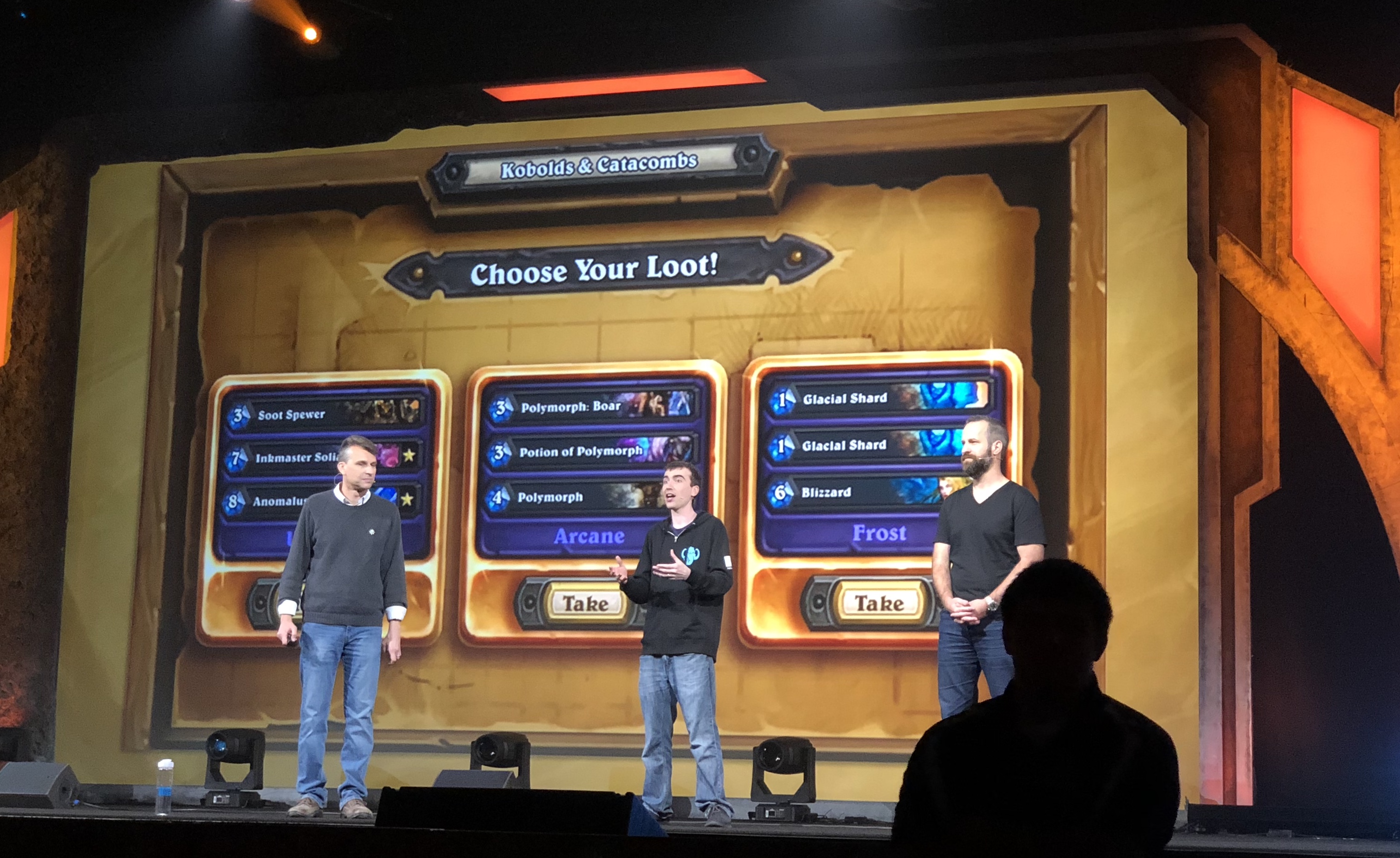 Overall, Dungeon Run is great fun and will definitely feel different than anything you’ve played in Hearthstone before, including solo Adventures. It does show how having a fully digital game allows developers to get those cards and use them in all kinds of crazy ways. I think this new mode will be great for new players, since card collections don’t matter and there’s no PvP pressure that might scare people off. The variety is pretty much endless (1.4 Kobillion as the developers said jokingly), and playing with only 8 out of 48 bosses each run creates those moments when you’re hoping you don’t get X boss or hope that Z boss will be coming your way soon. What do you think of Dungeon Run? Excited to play the game so differently?