The late 80’s and early 90’s were times when the more gore and shock-value video games had, the better. One of my favorite games of this time was Total Carnage. My cousin and I would play the crap out of its violent cooperative mode. Total Carnage’s gory, action-packed gameplay made us feel like the edgiest kids of all time. I’m a sucker for anything that provides nostalgia (as I have mentioned time and time again) and Kick Ass Commandos ($1.99) gave me a much-desired dose of Total Carnage-like gameplay. It was originally released on Steam back in November of 2016, and now the game has “Schwarzenegger’d" and “Stallone’d" its way onto the App Store. 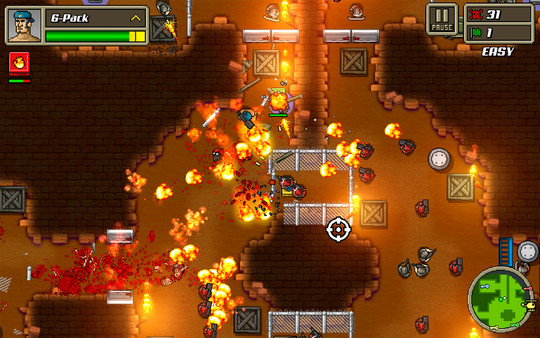 Let me cut straight to the chase: Kick Ass Commandos kicks ass. Who would have thought? Kick Ass Commandos is an “in your face" twin-stick shooter where you play as various commandos that are more trigger-happy than any action hero you can think of. The game also sports some hilariously crude and cleverly written humor that made me chuckle on more than one occasion. There are a total of 6 different “mission packs" (worlds) with multiple levels to complete in each pack. There are also a total of 10 different commandos for you to unlock and play as while upgrading their stats. You will also encounter power-ups (such as health, rocket launchers, and grenades) and rescue other commandos that will assist you in dishing out a tremendous amount of lead. It’s complete and utter chaos.

What surprised me the most with Kick Ass Commandos was its outstanding level designs. I can tell that every level was crafted with specific intentions and ideas in mind. The game may be all-out crazy and inspire chaotic actions from the player, but you can’t go into every situation head first with your guns blazing. You will inevitably get killed in any of the game’s 4 difficulty settings. Diving in and out from behind cover is absolutely integral during some situations in the game. There are also different objectives for completing each level, such as getting to “da choppa" and collecting classified files. The variety of mission objectives and well-crafted levels kept each playthrough feeling fresh and satisfying, despite me doing the same “rinse and repeat" actions of shooting bad guys. 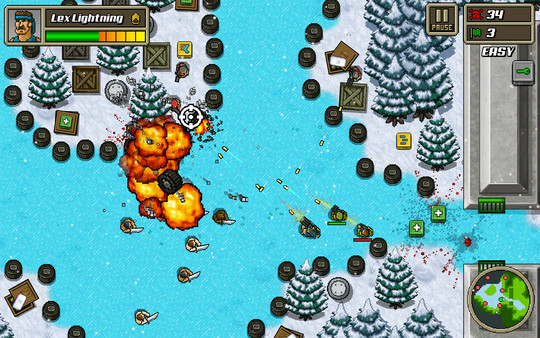 Another aspect that kept the game feeling new was its distinct commandos, enemies, and boss fights. You will rescue other commandos, such as random “Privates" that are (according to the game’s trailer) “totally expendable", as well as many others. It’s nice to see so many different characters that look like they have personalities all of their own. The enemies you face have some differences as well. Some baddies come in different shapes and sizes while wielding a variety of weapons. Specific enemies will require you to be light on your feet while others will happily soak up your bullets like a dry sponge. Each boss fight was humorous and provided a unique challenge. I don’t want to spoil any of them for you but you can check the game’s description for a few examples (if your curiosity is killing you).

As with any game, you won’t enjoy its gameplay if the controls suck more than a vacuum. Luckily, Kick Ass Commando’s controls kick enough ass to do more than pass! I played the game on my iPhone 7+ and iPad (2017) and the controls feel equally good on both. They’re smooth, accurate, and simple. I have no complaints to speak of. 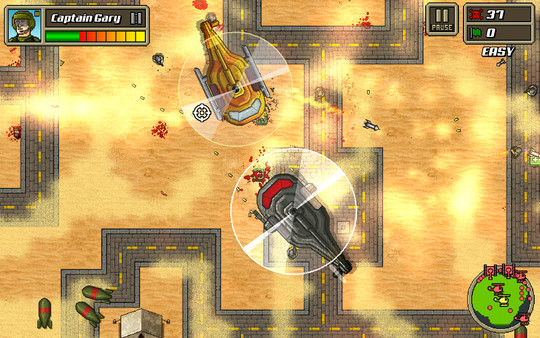 The game’s pixelated graphics are a pleasure to see in action. Explosions look like mini atomic bombs going off and enemies pop into bloody splatters/body parts upon their death. The aesthetics of levels change quite often, ranging from snow-encrusted landscapes to lush, green jungles. Nothing became stale to look at and I really appreciated Kick Ass Commando’s visuals. They made me feel like I could rip Kick Ass Commandos straight out of my iPhone/iPad, place it in a Super Nintendo cartridge, and plop it right into my Super Nintendo system.

However, I must note that sometimes things got a bit too chaotic on-screen with bullets, flamethrowers, rockets, grenades, blood, and explosions happening everywhere and it was extremely easy to lose sight of my character. I occasionally died because I couldn’t see what was flying my direction through the aforementioned thick visual clutter of chaos. It didn’t happen often and it may be part of the game’s strategy. You may not want to be constantly shooting at everything you see.

All in all, Kick Ass Commandos could not have a more fitting adjective in its title. It kicks ass, plain and simple. If you are looking for an action-packed romp through ridiculous environments and set pieces, look no further than this game. It’s over the top with its humor, visuals, gameplay, and quality. Definitely give it a chance and don’t forget to check out Kick Ass Commando’s forum thread for more.