When it comes to SEGA and their 16-bit library, game re-releases tend to fall into one of three categories. First, there are the games that are always included: Sonic, Golden Axe, Altered Beast, and the like. Then, you’ve got games that are often included, but not always. Phantasy Star 2, Ecco the Dolphin, and Shinobi 3 are examples of this group. Finally, there are games that SEGA only seems to include if they’re being very thorough. Sometimes it’s because they’re tricky to emulate, other times because of rights issues, and still other times where the reason isn’t clear at all. Beyond Oasis (Free) used to be part of this group, but it feels like it’s slowly moving into the second category instead. Its presence here relatively early on in the SEGA Forever initiative is a good example of its improving fortunes.

Before we get into the game proper, let’s talk about the details around it. Like other SEGA Forever games, you can download and play Beyond Oasis free, with mandatory ads paying the bills. If you want to remove them and enjoy certain other benefits such as local saves and offline play, you can pay a one-time IAP. It includes all of the latest features and failings of the other SEGA Forever Genesis games, including MFi controller support, cloud saves, the ability to rewind your gameplay 15 seconds at a time, and some hard-to-miss emulation issues. The game’s controls are somewhat complex in places and sometimes it’s a real pain to get things to work using the virtual controls. The rewind feature helps a lot to compensate for that, but overall, you’re going to have to accept that this is a flawed (but still quite playable) presentation of the original Beyond Oasis. 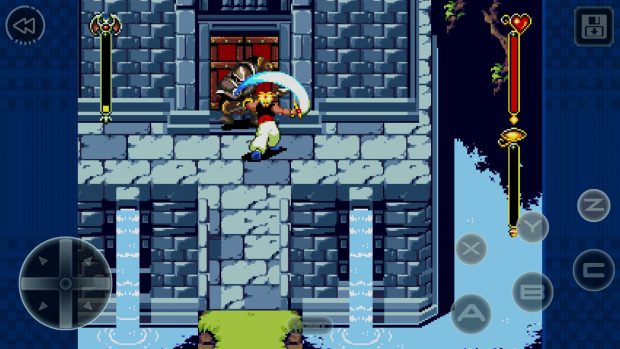 Beyond Oasis is a somewhat late-life Genesis action-adventure game developed by Yuzo Koshiro’s studio, Ancient. It’s probably the most successful of SEGA’s many attempts to fill the Zelda-shaped hole in their line-up, and it accomplishes that by largely doing its own thing. You play as Prince Ali (fabulous he), a young man who finds a magical gold armlet while doing a bit of routine treasure-hunting. This armlet gives the prince the ability to communicate and cooperate with special elemental spirits. Unfortunately, it also puts him at odds with the mysterious bearer of the silver armlet. Prince Ali (mighty is he) must make his way through various dungeons, caves, and palaces, collect all of the elemental spirits, and use their talents to bring peace to his land for good.

The game was released in late 1994/early 1995, right at the tail-end of a wave of interest in the Arabian Nights stories, likely induced by Disney’s 1992 spin on Aladdin. As such, there’s a distinct Arabian fantasy feel to the game’s setting that helps it stand out from the pack. Beyond Oasis was frankly gorgeous in its time, and it still looks nice today. Excellent use of the Genesis’s limited color palette, and some truly massive bosses make this a visual showcase for the hardware in some respects. The audio was naturally provided by the legendary Yuzo Koshiro, and while it’s quite different from his usual fare, it handily takes the Genesis sound hardware in a direction few other dared to challenge.

Apart from the setting, the main distinguishing feature of Beyond Oasis is its combat. Developer Ancient more or less came right from working on the Streets of Rage series to this title, and you can see some remnants of those earlier games here. There aren’t many enemies that will go down in one or two strikes, so you’re forced to line them up and pull off some combos and attack chains to take them out. It also pulls cues from the popular one-on-one fighting games of the era by giving Prince Ali (handsome is he) an assortment of special moves that can be pulled off with the right combination of directional inputs and buttons. Ali can use these moves right from the start of the game; you need only to know the correct commands to make use of them. 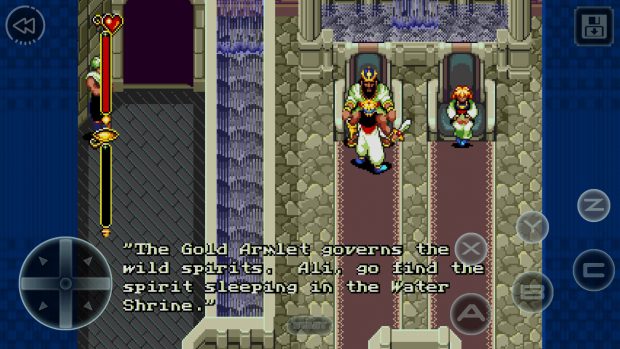 Of course, games like these need ways to gate sections of their overworlds off from the players, and that’s where the elemental spirits come in. Each spirit has three different actions they can use, and these abilities are the literal keys to progressing in the game. Simply tap the magic button once for the first ability, double-tap for the second, and hold and release for the third. Some of these abilities are useful in a variety of situations, while others really do just serve to remove barriers. Using those abilities consumes some of your limited magic gauge. Even having the spirit out and ready to use causes the gauge to slowly tick down. Outside of dungeons, the gauge will automatically refill when you aren’t using a spirit. If you’re inside, you’ll have to chow down on some food to top off the gauge.

In general, refilling that gauge isn’t a terribly big hassle. But it is something you need to be aware of, particularly since spirits can only be summoned from certain locations. If your gauge runs out and your spirit goes away, it can be tricky to find a place to get particular ones back out. You can manually put away spirits, but that command proves to be an irritating one in this particular version of the game. You need to hit the A, B, and C buttons simultaneously, something I found a lot more difficult to pull off with virtual buttons than with physical ones.

Speaking of control headaches, one of the oddities of this game is that you use the same button to crouch as you do to jump. You need to press and hold the button to crouch, and release or simply tap it to jump. This makes timing your jumps a little bit tricky, a problem that can become outright aggravating when the game starts busting out more difficult platforming challenges. This is a pain in any version of Beyond Oasis, but it’s worse here if you’re using virtual controls. On top of that, the many enemies that require you to crouch and attack are also quite irritating in this version. It’s hard to pull that off with a single finger the way you certainly could on a controller. I found myself having to use two fingers whenever the need for these attacks arose, which almost always meant having to adjust the way I was holding my device. 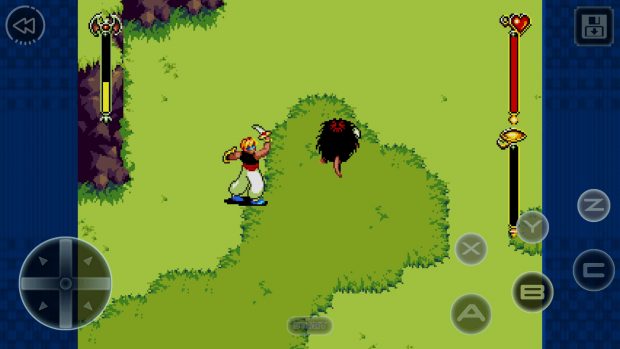 The basic flow of Beyond Oasis should be familiar to fans of The Legend of Zelda and the like. An overworld map serves as the hub from which all of the game’s dungeons can be found. Enter whichever dungeon is open to you, solve the puzzles and defeat the enemies found within, beat a big boss, and exit with some sort of trinket or plot coupon that will open the way to the next dungeon. This game feels considerably more linear than Zelda, and it’s assuredly shorter than most of the games in that series. Your map will helpfully have flags planted in whatever place you should be heading to next, so unless you intentionally dally, you should finish the game within six to eight hours. Owing to that brevity, the game’s pacing is excellent. It feels like you’re constantly moving the plot forward or getting something new to play with.

Beyond Oasis is a flawed gem in the Genesis line-up. Unfortunately, some emulation issues and the nature of virtual controls magnify a few of its flaws, and it will almost certainly make you angry at times as a result. Nevertheless, the game can still be enjoyed in its current form, and on balance is probably one of the best action-RPGs currently available to mobile gamers. I’m very happy SEGA selected it for the SEGA Forever line-up. If you’ve never tried Beyond Oasis before, you’ll definitely want to give it a chance. Even more than two decades later, the adventure of Prince Ali (amorous he) remains quite a bit of fun and rather unique to boot.